The Ban.do party house was full of many rooms – some of which had an obvious function (like Jen’s office), and some of them were a little more up in the air (like Todd’s office that turned into a Champagne Room). This last room was definitely more of a ‘what exactly is going to happen in here?’ situation. So, naturally we designed it to be a bar, because just in case there were too many people for the champagne room the overflow could head into the bar. But then it all changed.

Here is what it looked like when we started: 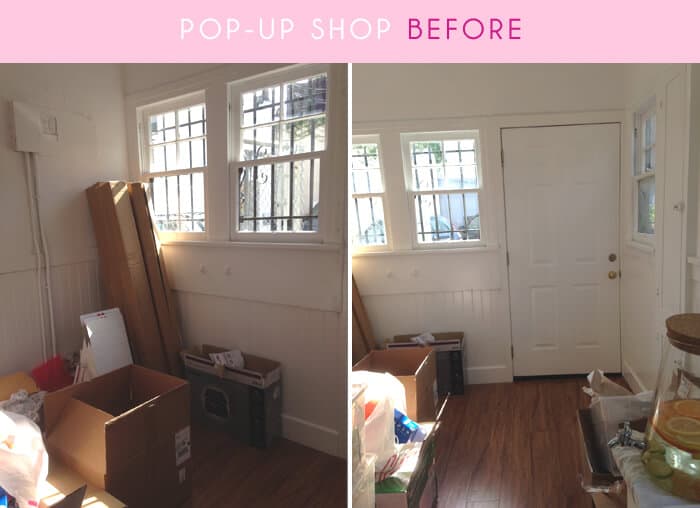 They had just moved in and clearly it was just storage at that point. It was a cute room, though, and certainly had it been bigger it could have been a good breakfast nook, but with just a table floating in the middle it really would only sit 2-3 people. Instead Jen though that they could use another private room mainly for calls or just when there is an extra person or temporary assistant helping out. This ‘desk’ would also double as ‘a bar’ … how convenient, I know. 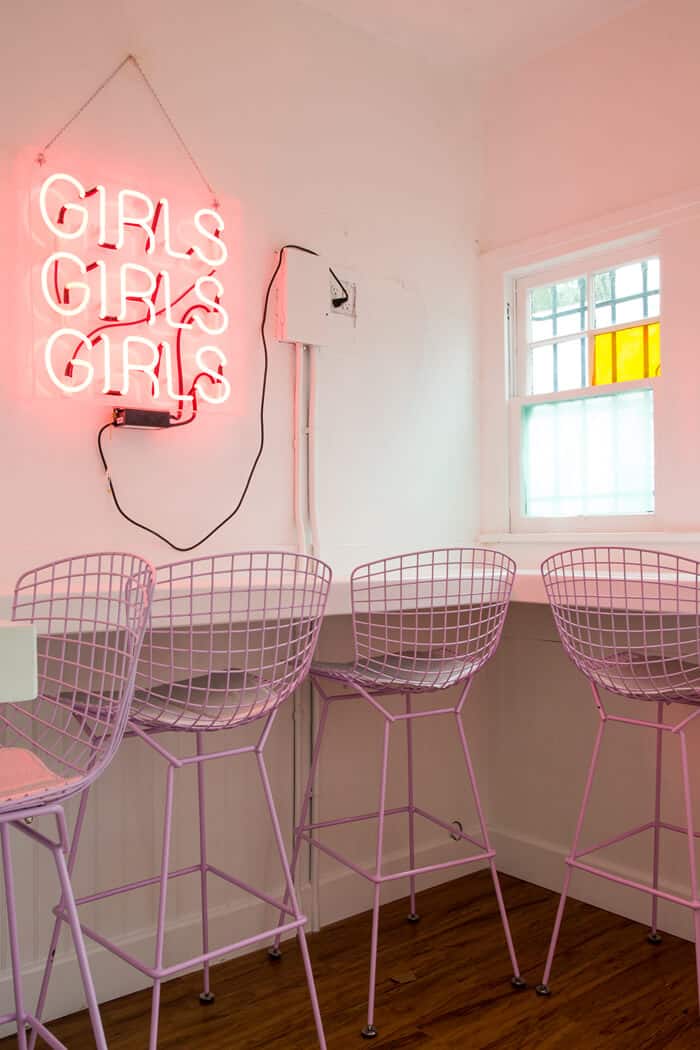 We first put in a built desk and had it lacquered white. Then we added some awesome stools (no longer available but check Industry West for some other great options) and of course the Girls, Girls, Girls neon sign, which really was the first priority of business in the whole project. 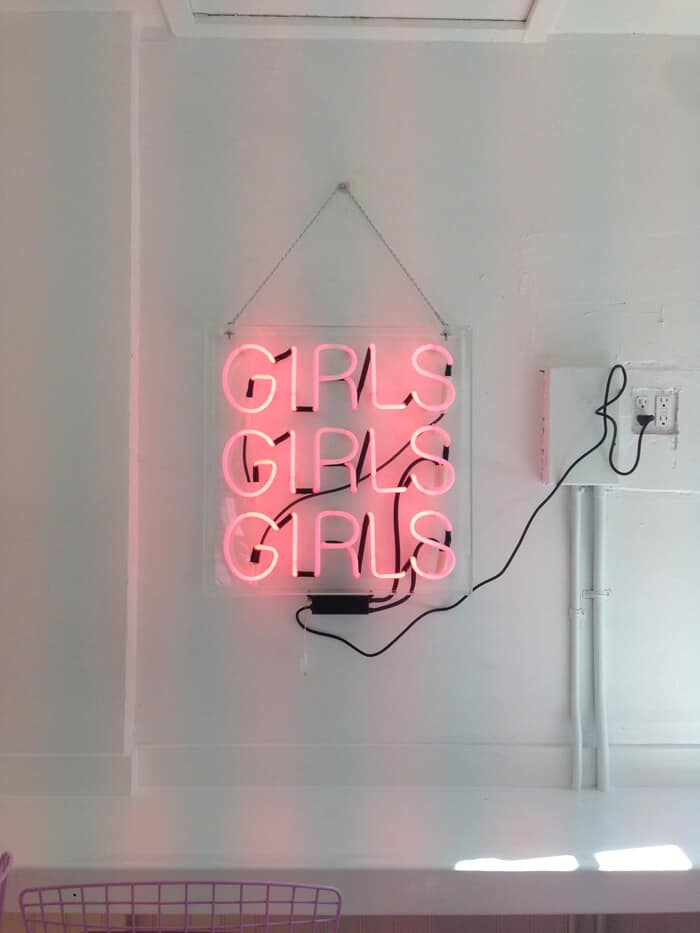 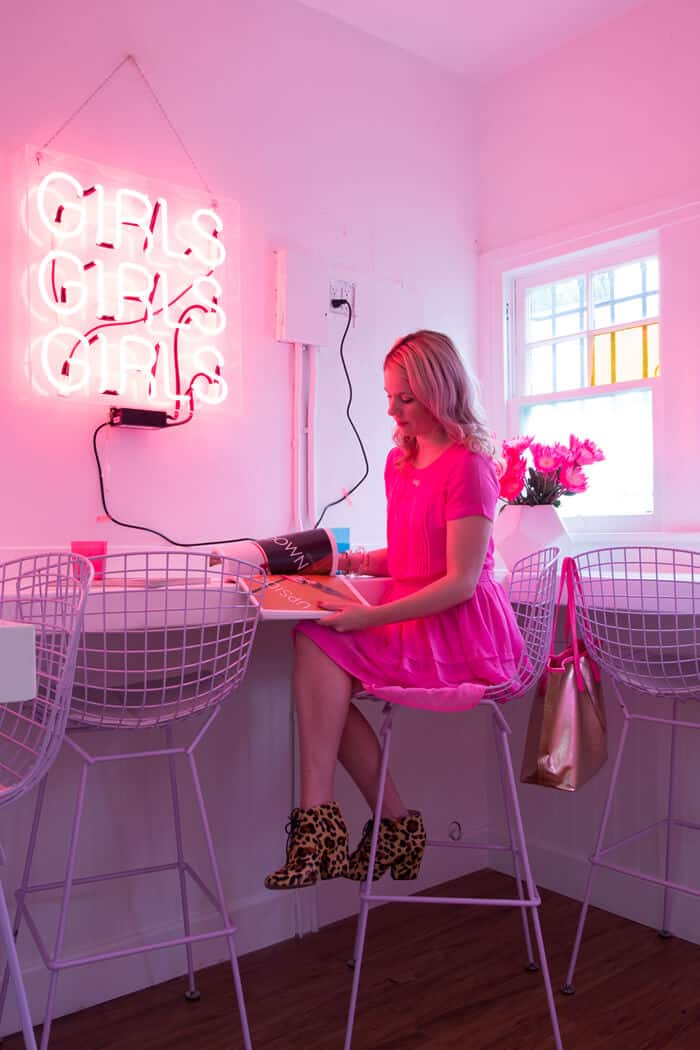 WHY IS THAT CORD SO BLACK???? Also Why is Kelly so cute? Just reading her magazine while 4 people stare at her and take her photo.

The Ban.do girls lived with the ‘bar’ for a few months until they realized that instead they should chock it full of stocking stuffers for their monthly (or so) pop up events. 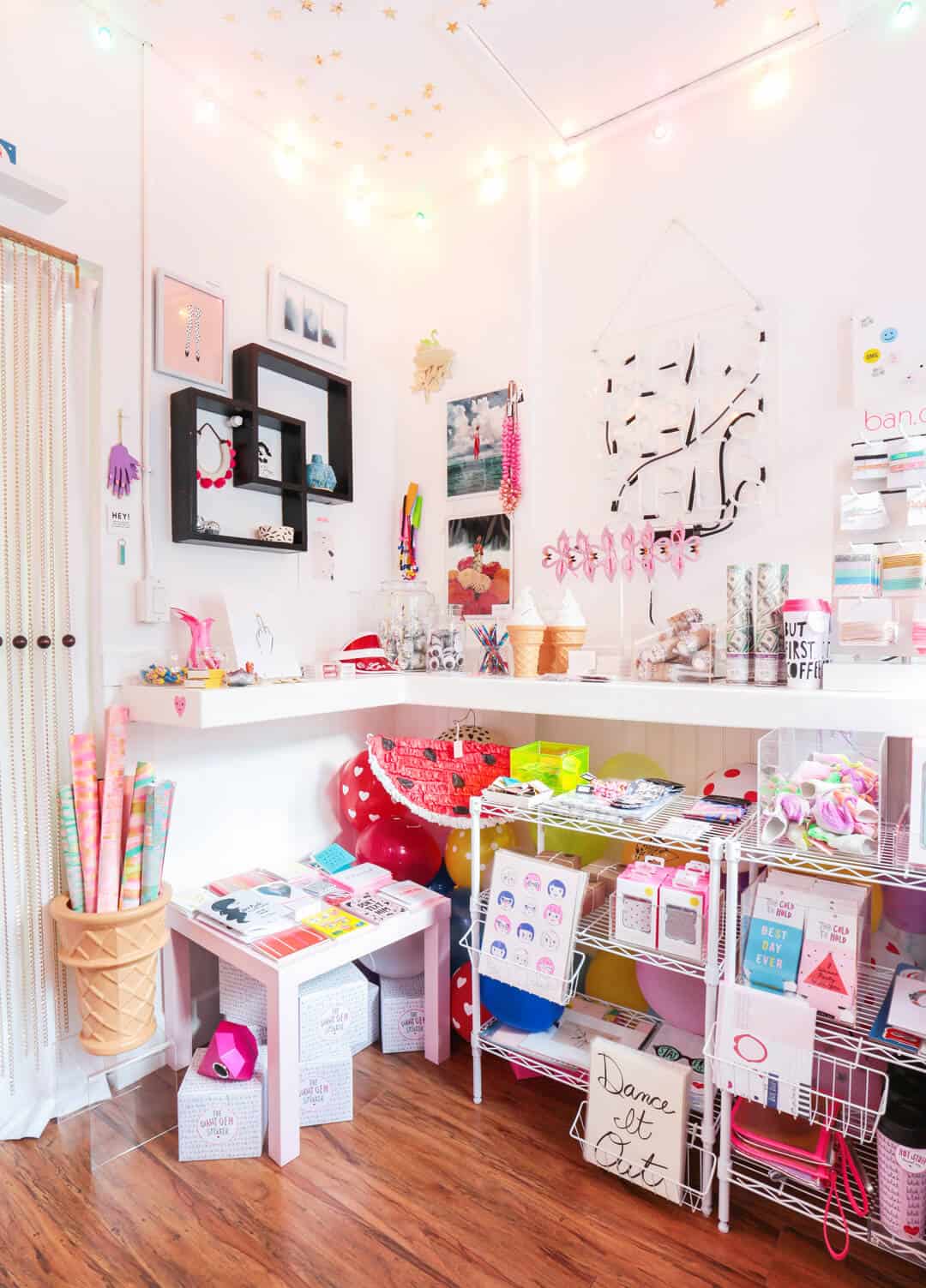 I had nothing to do with stocking or styling this but I’ll take credit if y’all like it. They basically just reach out to people they like and now sell their cool stuff, in addition to the Ban.do product, obviously. 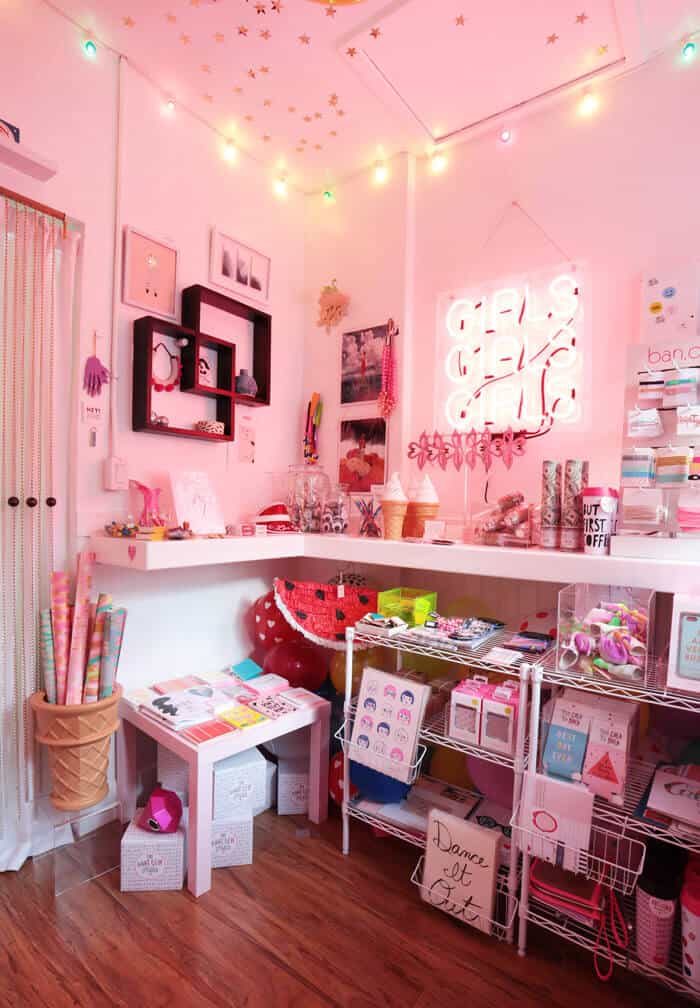 They put stars on the ceiling and its adorned with a lot of pretty handmade things, mixed with greeting cards with areolas and stickers on it. 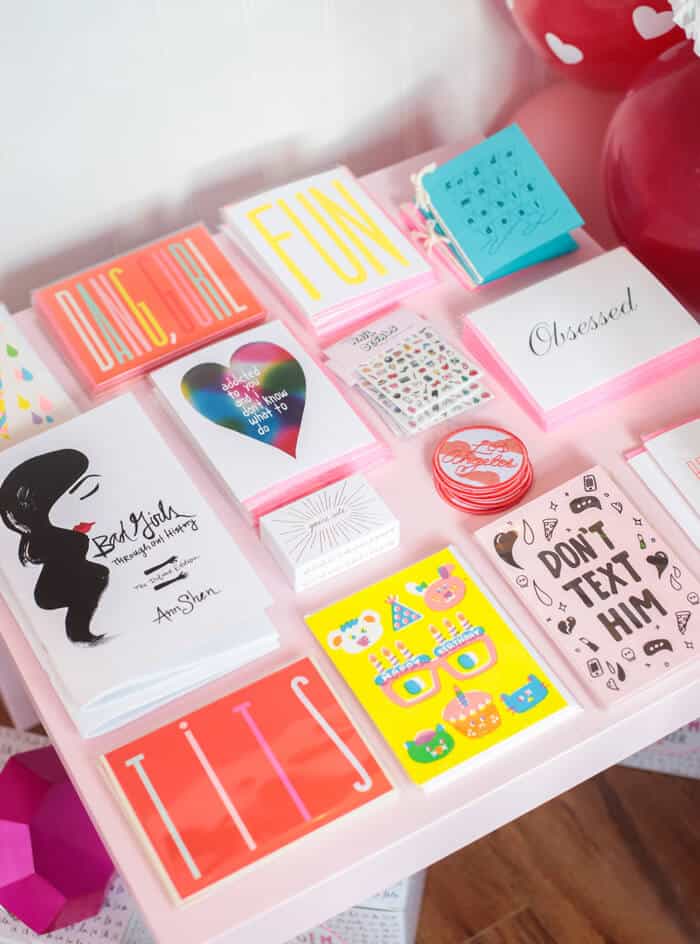 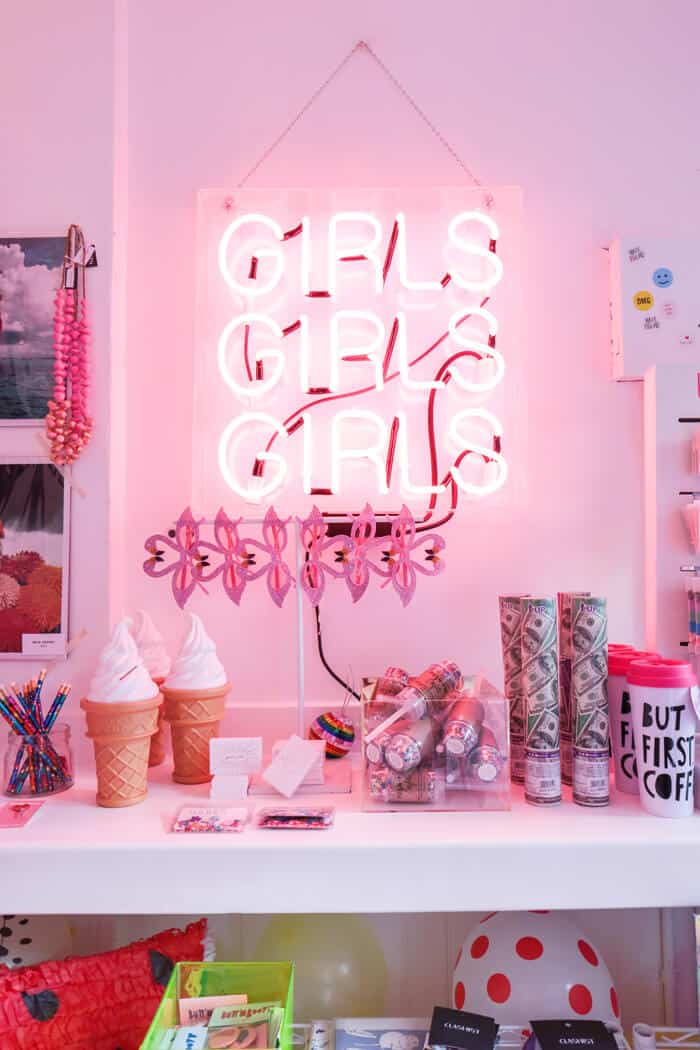 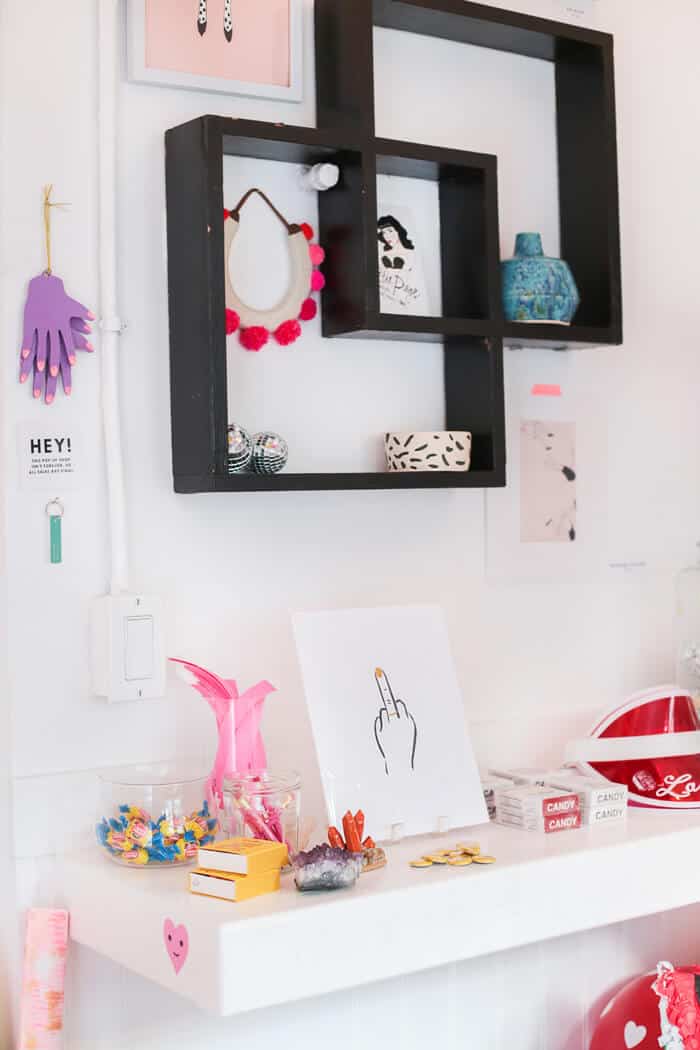 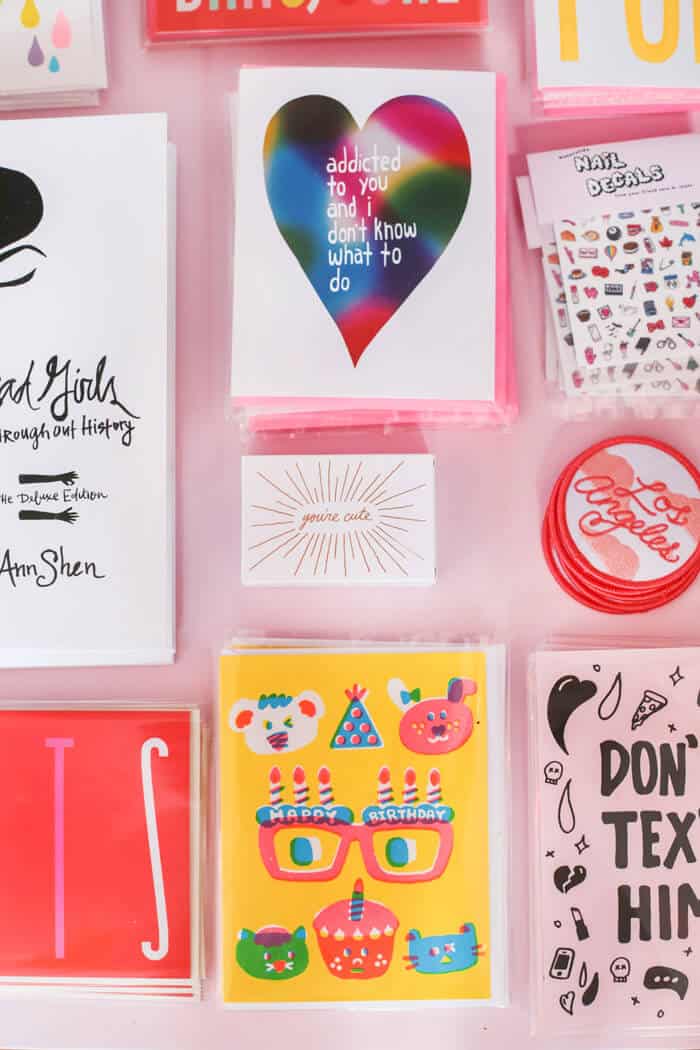 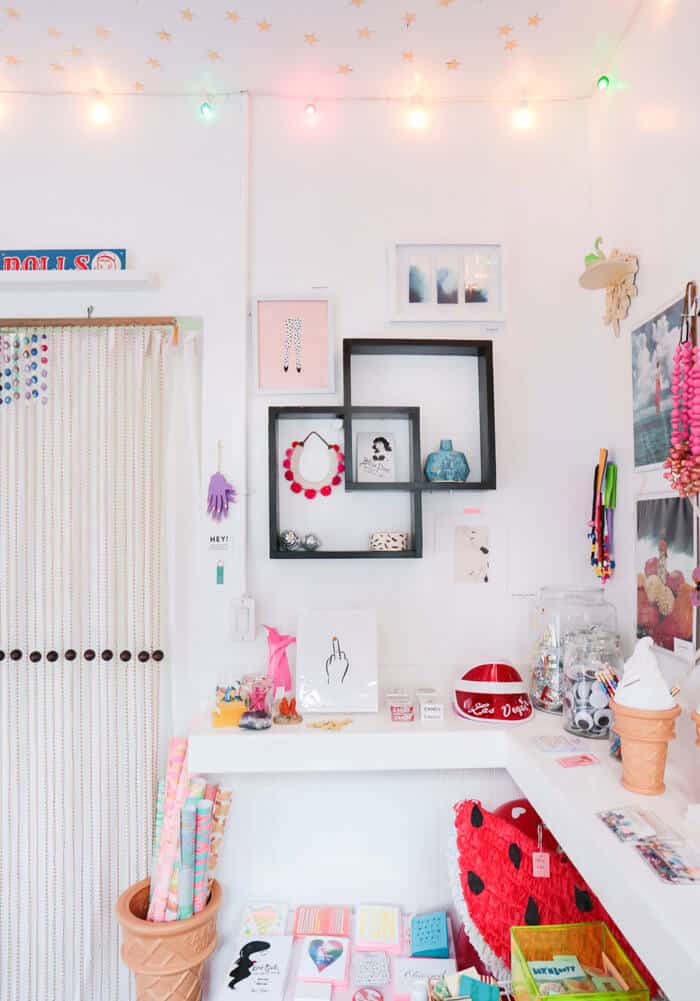 All in all we didn’t REALLY do this room – we just put in a built-in bar and added some stools, but it seemed crazy not to give you the gift of this eye candy.

*The first round of ‘after photos’ and all the progress/installation photos by Kelsey Tucker. Refinery 29 ‘after’ photos (and portraits) by Tessa Neustadt. Check out the whole Refinery29 tour here. Want more info on the whole process? Check out these posts: The Beginning | Floor Plan & Progress | Ban.do Update | The Ban.do Studio Design Reveal – The Front Room | The Ban.do Studio Design Reveal – Jens Office | The Ban.do Champagne Room | 1 Day DIY Striped Walls | Ban.do Custom Pieces

Want to buy some happy, smart and cheeky notepads pouches, agendas and iphone cases? Head on over to Ban.do.

The “About” and “Follow” links don’t work on my iPad at all, although they work on my laptop when I hover my cursor over them. I just thought you would want to know so you can make your site more mobile-friendly!

I’m a little jealous over how cute this room is + all the natural light that it provides. I can just see all the good IG shots in my head!

Looks so fun and cheerful! I would see this colorful rug inside: http://dorisleslieblau.com/new-rugs/rugs-in-stock/explosion-n01471-rug

Love everything about the Ban.do project, so inspiring! But man, I could not live with that black cord on the Girls, Girls, Girls sign. Can electrical cords be painted?

LOVE the Girls sign!! And Kelly’s Dress is to die for!!! Any hints on brand or where purchased?
xxxxxx

That room embodies that awesome “Facts Of Life” shop they had in the mid 80s! Or Kids Incorporated:)