We were pretty much done with the Ban.do project a few months ago, but as I stared at the scouting shots I thought couldn’t there be just a bit more crazy up in there? We really didn’t have a budget to spend a ton on wallpaper or some sort of custom mural so whatever we added to it for the shoot had to be fast and cheap – which are words I only like to use to describe the food I’ve been shoveling into my pregnant body at 9pm.

I liked the white walls, I did, but there lacked some sort of final cohesion between the brand and the space. Jen was fairly adamant about not having the space look like the product, but instead an inspiration for it. I understood but as a designer I felt like there wasn’t quite that BANG that I wanted.

Let’s recap where we started in the main space after they moved in: 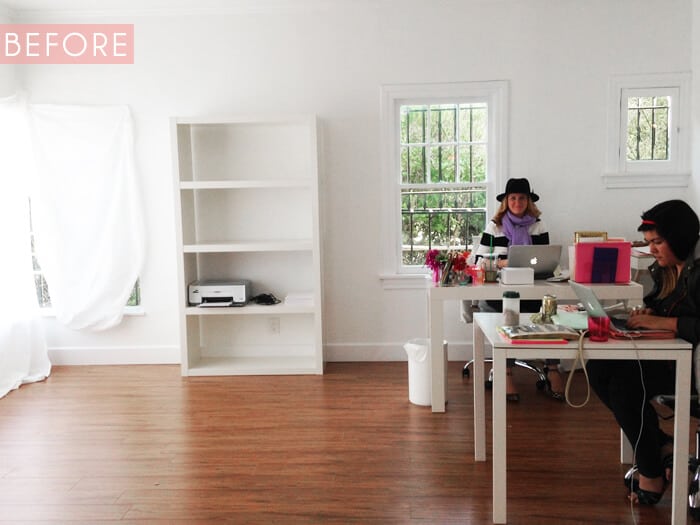 I believe that was pre-pink hair for both Kelly and Christina. Look at their sad little desks.

After we did the first round of installation and scouting shots it looked like this: 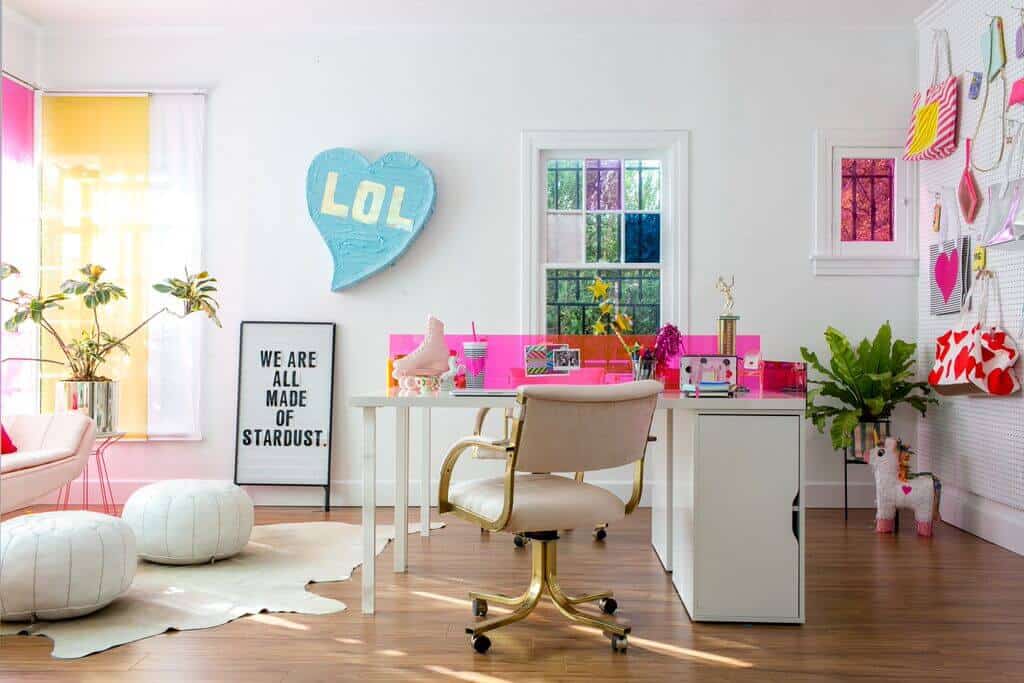 I liked it for sure, but it didn’t feel as cohesive and intentional as I wanted. It felt like someone had found a bunch of awesome stuff and styled it in a room together, but if that pinata and sandwich board were removed It might have looked empty and really young – so my job wasn’t really done. A creative studio that represents a really strong brand needed to have something there that united everything.

It was a job for some pink diagonal stripes.

Finding an inspiration photo for the fairly simple pattern was strangely difficult. I googled ‘diagonal stripe’, ‘perpendicular stripe’, ‘prism stripes’, ‘candy stripe’ and NOTHING came up, despite the fact that this pattern is on trend. 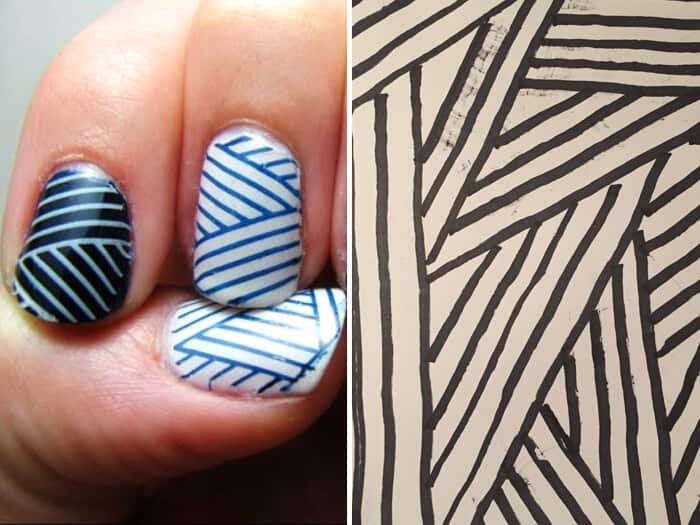 Finally I found this nail art that represented what we wanted, but right before that I had drawn that pattern on the right with a sharpie on one of Charlie’s drawing pads – which was too complicated and rather ugly. So I gave both those options to Ginny and she came up with a couple different renders. 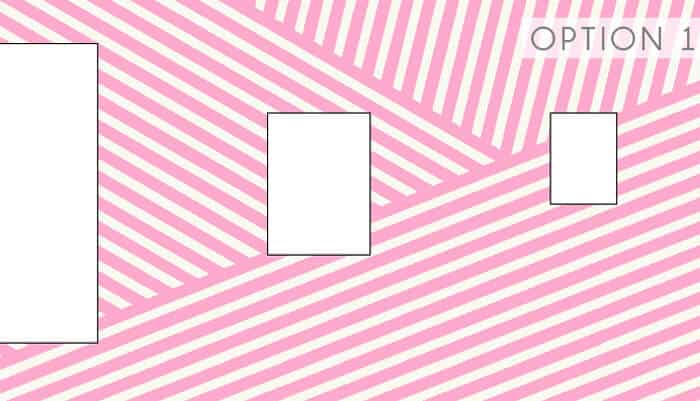 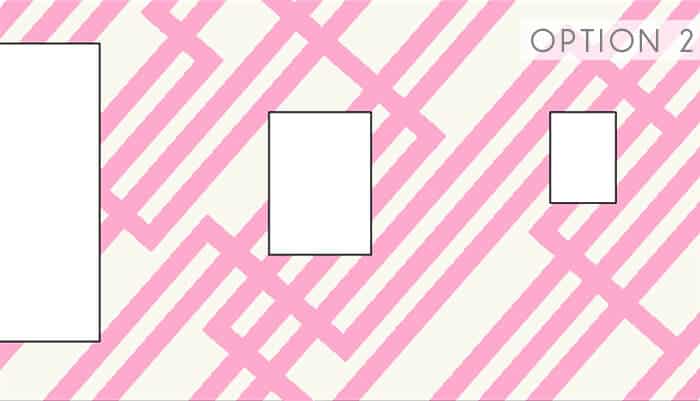 Option #2 was what she thought I meant when I verbalized the pattern and option #1 was what she did after I showed her the nail art. Goes to show you how different the interpretation of a visual are when you speak about it verbally. Pictures are worth a 1000 words.

So we had our dude tape it up: 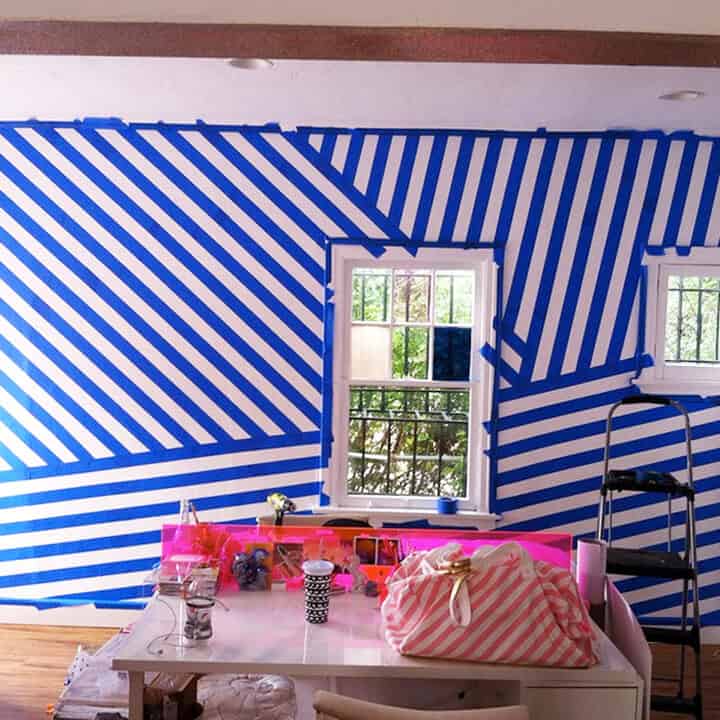 He us 3″ tape in this room and 5″ tape in the other room. Is that pattern hard to tape up? I don’t think so, it just takes someone who cares enough to obsess about the lines being (and staying) straight. It’s not perfect, but honestly you can’t tell.

That amazing color blocked sequin thing was done by Natalie Shriver for their catalogue shoot. It was just being stored in the kitchen, so we freed it and gave it a space of importance in the front room. It’s pretty dope because it brings all of our colors together and added that hit of cobalt blue that was in the inspiration but never fully made it in the design plan.

Meanwhile on the other side of the room we did a very similar thing just with a larger scale (almost 5″) tape.

We loved the RAD but it slowly fell apart (I guess thats what you get for $15 at the flea market). My only regret is painting the side walls and ceiling pink – it made the whole room feel pink which was not totally the intention, so those are now painted back to white. I haven’t seen it yet in person but I’m assuming that it feels a lot more fresh and clean. These lovely ladies have to design in this space so its best to have some visual stimulation without it being overwhelming.

And that’s how we put diagonal pink candy stripes on the wall in one day.

(*Oh and quick tip – where the stripes meet you do have to pull off the tape and bridge that gap – you’ll see what I mean. At least thats what Collin did – I just didn’t want it to drive you nuts if you couldn’t figure out how to do it in one quick coat.)

I LOVE reading your blog everyday (beyond entertaining) and the new design is pretty and fresh. If I may offer one little bit of totally unsolicited feedback? The serif font for the text of your blog entries is much more difficult to read. For a blog that is visually stimulating and beautiful (like yours), a sans serif font would work so much better – that way the copy and photos aren’t competing for my attention…my eyeballs are a little overwhelmed right now. 😉 Congrats on all of your new STUFF!

I think it was just changed today to one of the most readable fonts out there (garamond). But maybe it hasn’t changed yet and they are doing it tomorrow. Anyway, a super easy fix and one that we are obsessed over because obviously making it readable is VERY important, so thank you for chiming in. I’m hoping that your computer didn’t cache the new font! )

if your computer did cache the new font how do you fix that? the serif font is still showing up on my screen 🙁

Garamond is a serif font.

I think it might be a different serif from the very beginning of this new site – it’s some kind of Bodoni – but I think it’s now BIGGER at least.

I too am still finding it difficult to read. Is there negative tracking? Letters look very tight together, as in “almost touching”. Or condensed or something. Squishy squished.

As a side note, I LOVE whatever I’m seeing as I’m typing this. Montserrat maybe?

I did not know anything about type, so I looked it up to find out the difference. The simpler, sans serif is definitely easier to read and more web-friendly!
http://www.webdesignerdepot.com/2013/03/serif-vs-sans-the-final-battle/

Emily, I love that you keep working on a project until it feels right. You’re a true artist!

That’s interesting, because the whole point of the serifs is to guide your eye along the line of text, making it easier to read.

as always such inspiring work and joy to start my day.

since everyone is talking about the font, i just want to say, i can read it just fine…i wonder if my computer must self-correct, or i don’t have the font or?? cuz it seems completely normal. i’ve got an apple desk top, my iPhone and i even used my daughter’s chrome book on one occasion….all normal font and easy to read. i really can’t see what people are talking about.
ps- im old (40s) and don’t have great eye sight either… 🙂

Love the stripes. The entire space is so whimsical and unique. Who wouldn’t want to work there?

I can’t even tell if the font changed or not, but I do know whatever you’re using right now is still very hard to read. Just say no to serifs!

The whole place really did come together with the stripes – love it!!

I, too, am a HUGE fan of your site. It starts my day and your Instagram posts keep me amused throughout. BUT please go to a sans serif type! Serifs are too hard to read, esp. for those, such as myself, whose eyes don’t work as well as they might! Try something like Skia or Calibri or the basic Ariel. Even that old workhorse, Helvetica might work. Meanwhile, many thanks for providing a blog that’s always interesting and fun.

I have to say I agree with the ladies above. I love the look of the new site but the font is so hard to read.

I was wondering with all of the pink, if the girls had a hard time with it effecting their design work / color correcting etc?

I’m moving into a new office space at the end of summer and I would love to do something wacky with color but I’ve heard that it can swing colors when you’re designing in a space that is heavy one color.

I’m so jealous of that striped wall! It looks amazing!

Love the look. What pink paint color did you use for the stripes?

No huge issues for me with the font! This room is definitely one of my favourites posted on the whole website. I’m such a huge Ban.do fan (and Emily fan, duh) and I feel like this project encapsulates the brand perfectly! I wish I was brave enough to try something this wacky at home!

Fun stripes! But your first styling with the potted plants, the white cowhide, the LOL pinata, and the sandwich board seems nicer for the space than the streamer art piece from the kitchen. No offence to the artist. Couldn’t all those pieces co-exist with the stripes?

so colorful and gorgeous!! I love it!

Hi! What color is the pink paint you used? I’m trying to do this for my 3 little girls room…thank you! It looks amazing.