A quick little makeover, y’all. The Fig House was finished, dunzo, opening party and all when Steve (the owner) told me that he had built a small groomsmen room on the property – a space that would be more masculine and really private where the dudes or just any VIP people could chill. Technically I wasn’t responsible for designing it but people would think that I did therefore if someone else designed it and I didn’t like it I would be bummed. I’m kinda annoying and controlling like that. So I was like, OK, lets do this real run and gun style – within two weeks and just a few thousand dollars. So we did.

Here was the empty space – it looked like a caboose – just long skinny and dark. It needed to house 10 dudes, give them a place to chill, drink, listen to music, drink, tie each others bowties and lounge. But it was a tricky space, y’all. It was just a long dark windowless box.

So we came up with a quick rough plan: 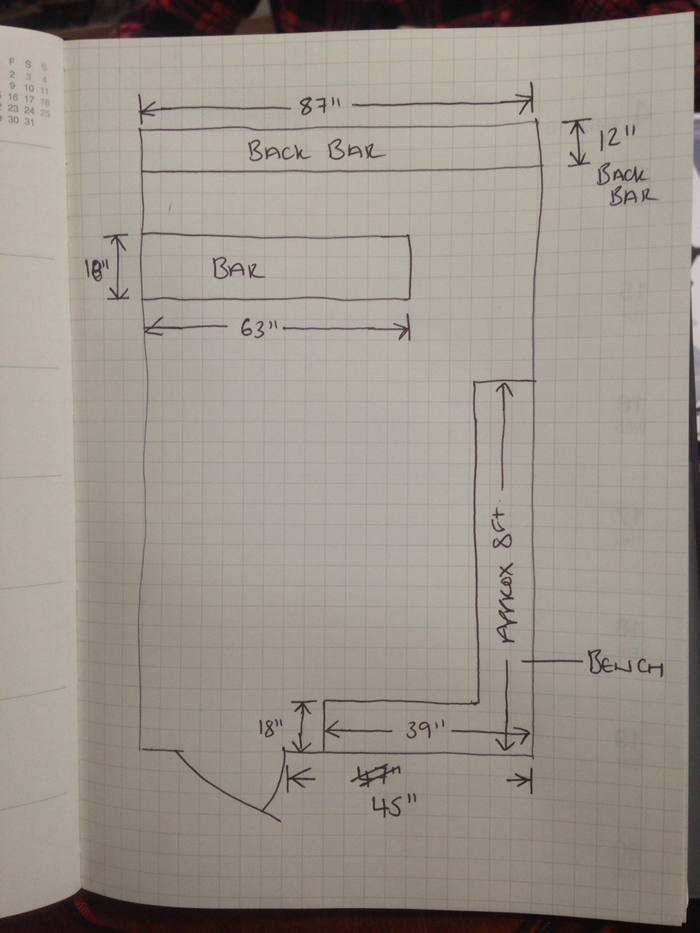 We would do a built in bench the shape of an L, and do two small scale chairs opposite it, with some floating side tables. Then at the far end there would be a bar that comes out from the side, and a back bar behind it for glassware and booze. The built-in bench was the best way to maximize the seating because having  10 chairs in there seemed like obviously a terrible idea. 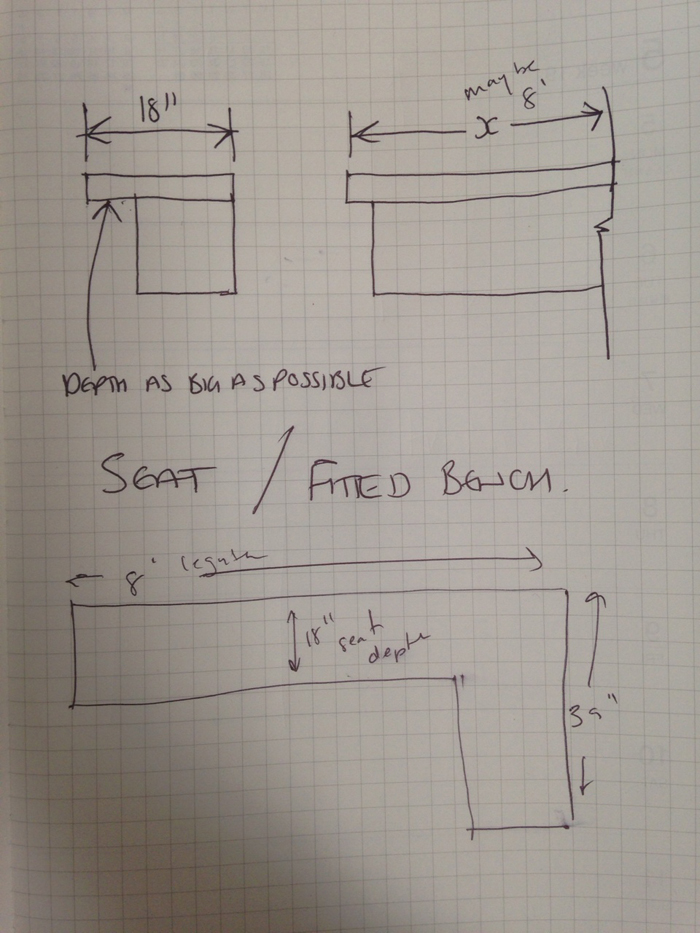 So we got a couple quotes on the bench and bar and my friend came in at $2500. That was too much, so Steve found a dude that would do the bench for $600 and then the bar for $800 (which is a steal) – so it ended up much cheaper  … still kinda expensive but ultimately we didn’t really have many options. Buying a bench and buying a bar would be not cheap either and it wouldn’t maximize the space nor would it look as high end. 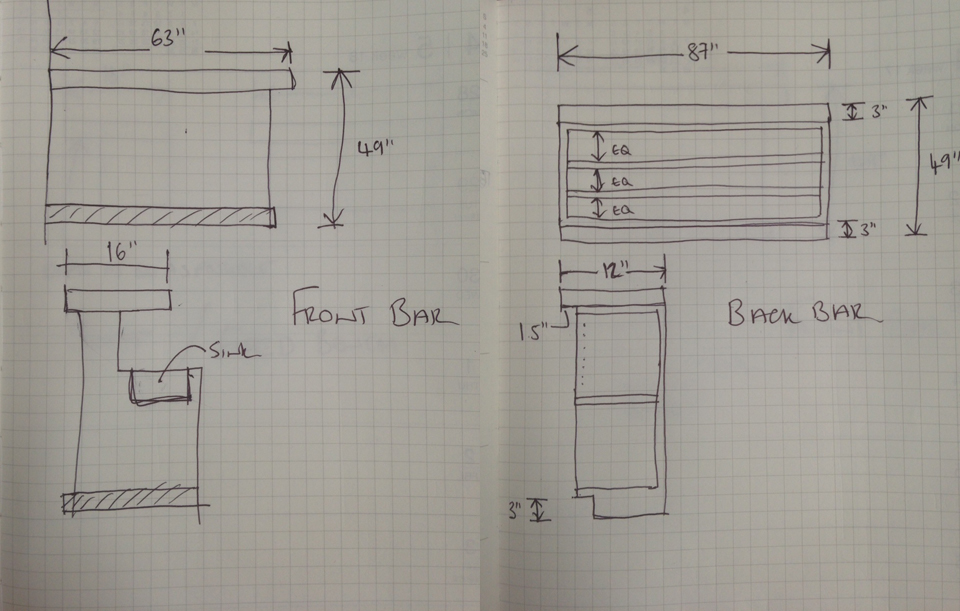 We pretty much only had a few days to shop and nothing could have a lead time because we needed The Fort (thats what its called) to be ready for an event the next weekend. So we went to Practical Props – a great all in-stock lighting place in the valley, and found some lighting options. We still had four of these sconces left over from The Fig House from Lamps’ Plus so we just needed two more. The other two that we needed to add at the end had to work with these, which is kinda hard. You don’t want them to be too close in design/style or they will compete and look accidental and stupid. So they almost need to be the opposite of them in finish, shape and style in order to look like it was intentional. We couldn’t get two more because where they placed the junction boxes would allow for them to be there (the spacing of the J-boxes was placed before I came on to help). 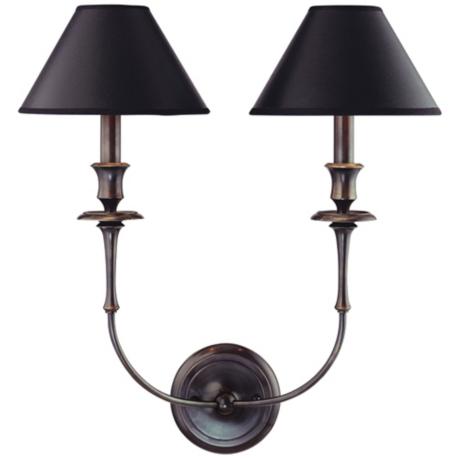 The below lights were all options that we were into that were a. affordable, b. would work with the other sconces and c. were available to install the next day. Parameters are a bitch, but then sometimes it really helps actually get things done. 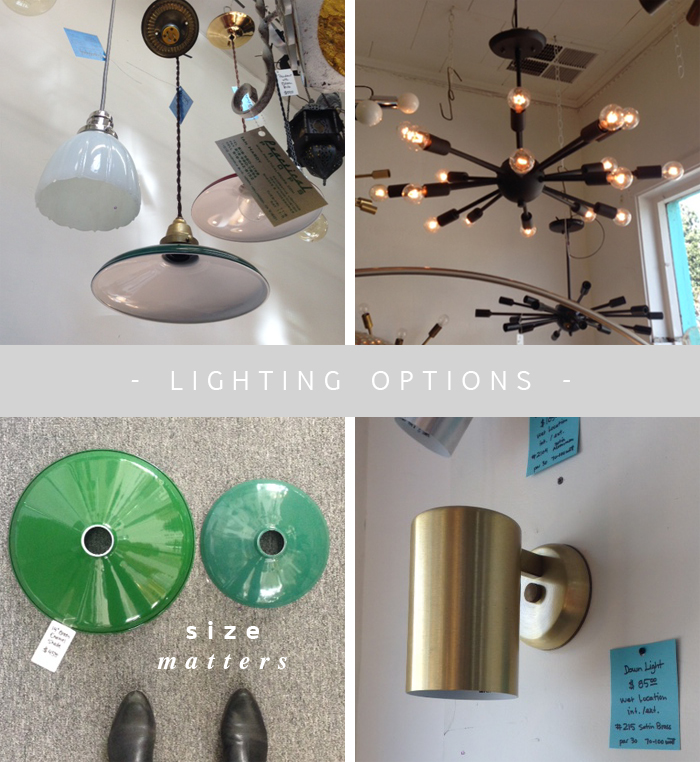 We loved the green ones for the pendants and the brass up-lights for the back of the bar. They contrasted nicely with the black double sconces, fit on the wall with space in between for a mirror and were $85 each so they were affordable. Are the absolutely 100% perfect? Nay, but they were cheap fast and stylish enough.

Then it was onto things to soften the space. Steve really liked the idea of burgandy or dark reds like an old english bar. Sure, why not, I can hang with that. 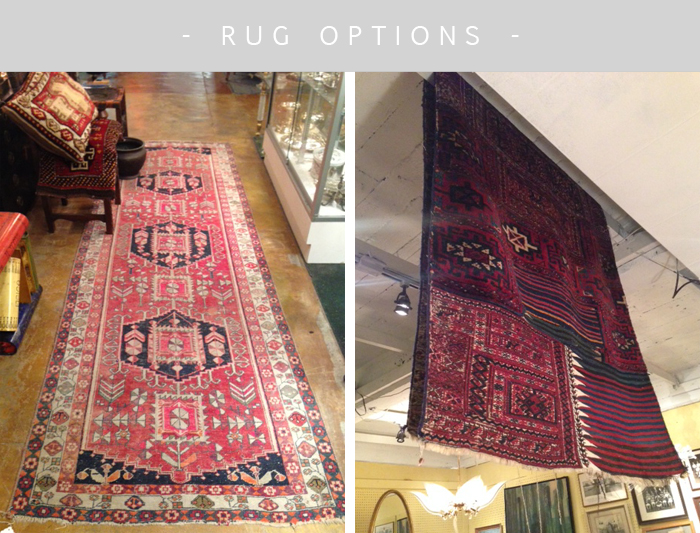 The above long one was awesome but I think $1200 so it was out of the budget. The other one was $340 so it worked. Then we got a few more rugs from the flea market for like $100 each and we were all set.

For chairs we went to all our favorite vintage haunts. We wanted them to be a pair, under $500 and nothing that we had to recover. 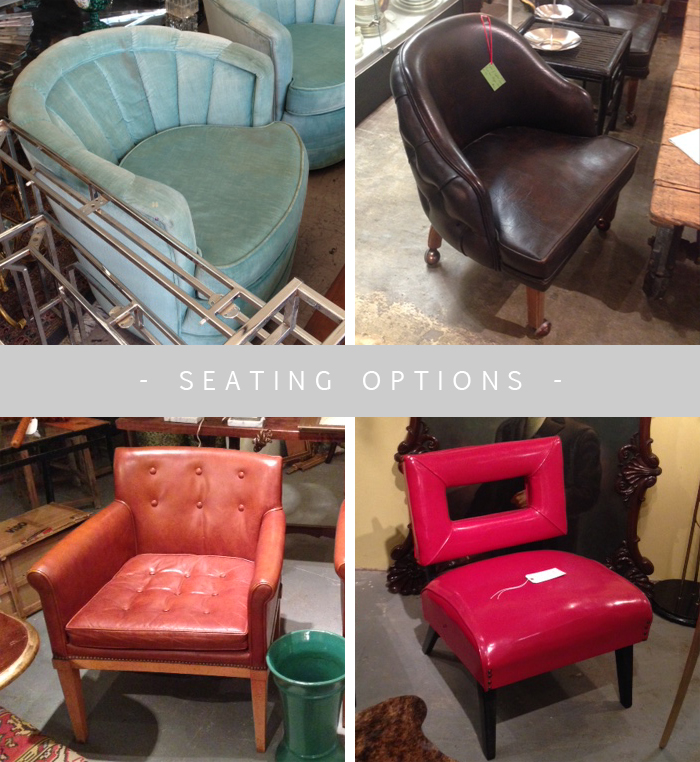 Honestly I don’t quite know how that red vinyl one got in the mix up there; that chair is VERY … uh … it just needs the perfect context to work. The teal velvet ones needed to be upholstered and we didn’t really have the budget for that and the strange orange/red one was too expensive.  Most of the club chairs we found were just too big and would block off the space. The brown vinyl seems like a weird choice for me, but they were pretty cool, were two for $600 and the vinyl was in really good condition. Plus they felt kinda pub-like.

Meanwhile we needed to pick the stain color and the paint color for the walls. We wanted something medium tone, not toooooo dark, but dark enough that it felt warm and masculine.

We started playing with stain colors and paint colors. We sampled BM Chelsea Gray, BM Sabre gray and BM cos cob gray. Below you can see the ceiling stained and not the walls yet. Why didn’t we just leave raw? Because they had used cheap/bad paint or stain grade wood that had so much discoloration that it looked distracting and just not good enough. So the stain would mask all the imperfections. 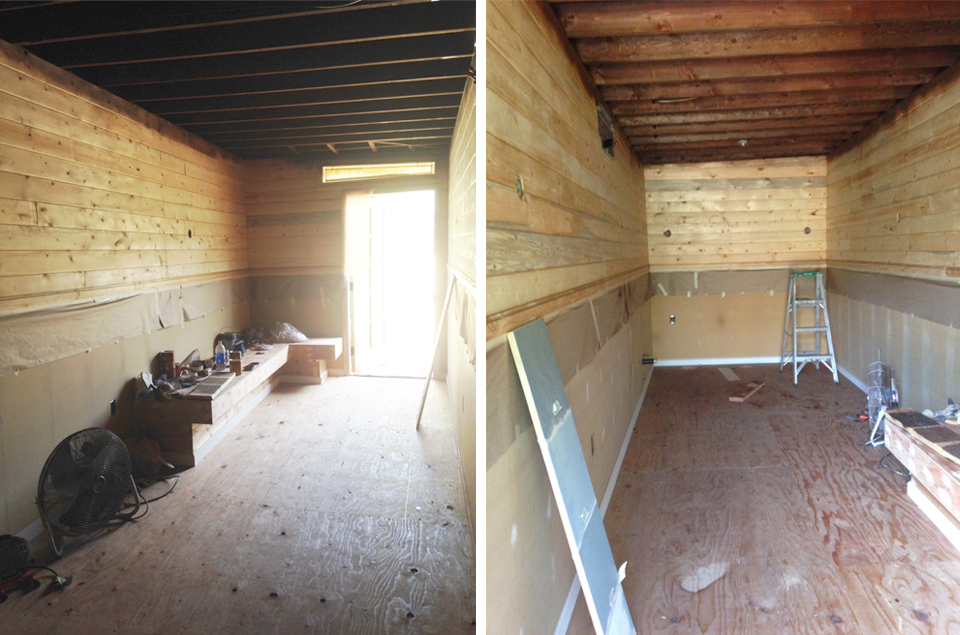 Meanwhile the bench got finished and we chose this forest green vinyl to make the cushions out of. Our dude charged us I think $280 for the upholstery and the fabric itself was $12 a yard. We did it in three sections so that there weren’t too many cushions breaking up the legnth but there was enough that it wasn’t just one big long cushion.  The only thing that I would do differently is get the cushion only 2″ like a pad, instead of 4″ foam. Once you add the piping if you have really foam (which we did because we went heap) the foam is so stiff that it had no give and it looked 6″. So next time we’ll 2″ because 2 looks like 3″ once its really full and tight. 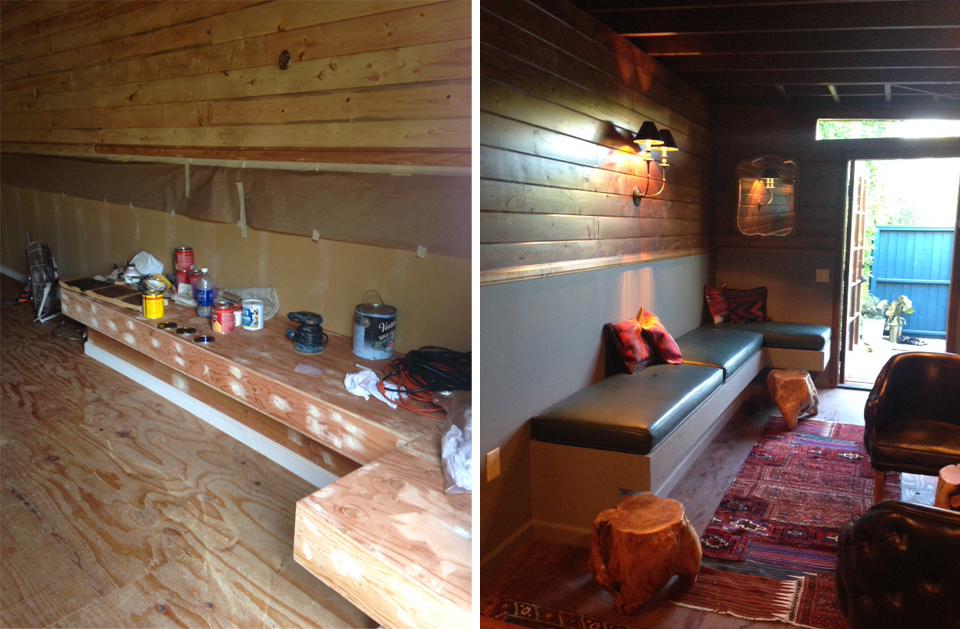 Things started coming together quickly. The outside was painted Hague Blue by Farrow and Ball (my favorite navy) and we started bringing in the finishes. 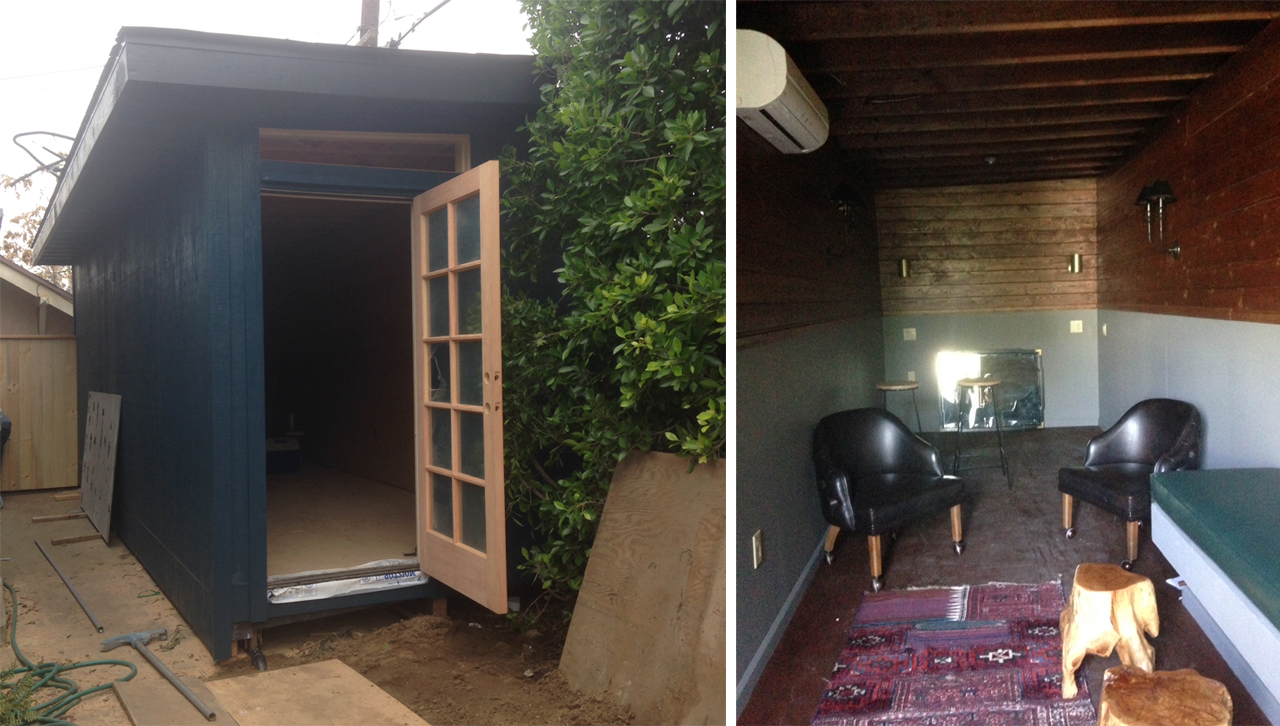 Ready for the reveal y’all?

Here you go. These photos below are by Ryan Phillips of Pure Photo. Thanks, Ryan! 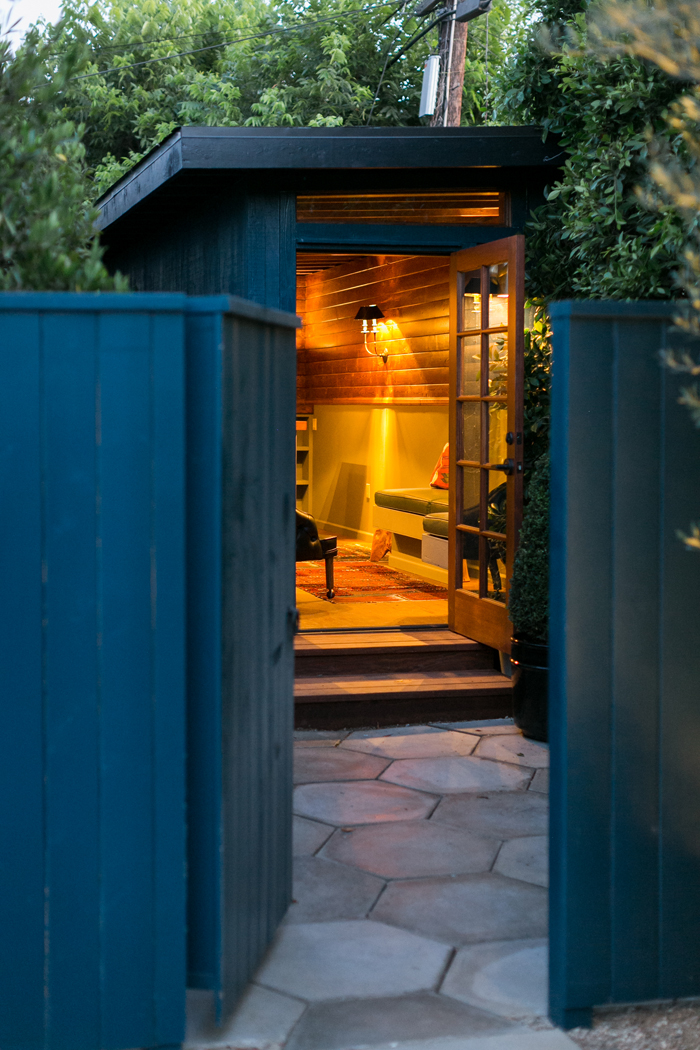 We added more of the pavers that we did in front of the stained glass doors there (they were custom where we had to buy a mold to make them all, but we wanted that huge pretty hexagon so bad). 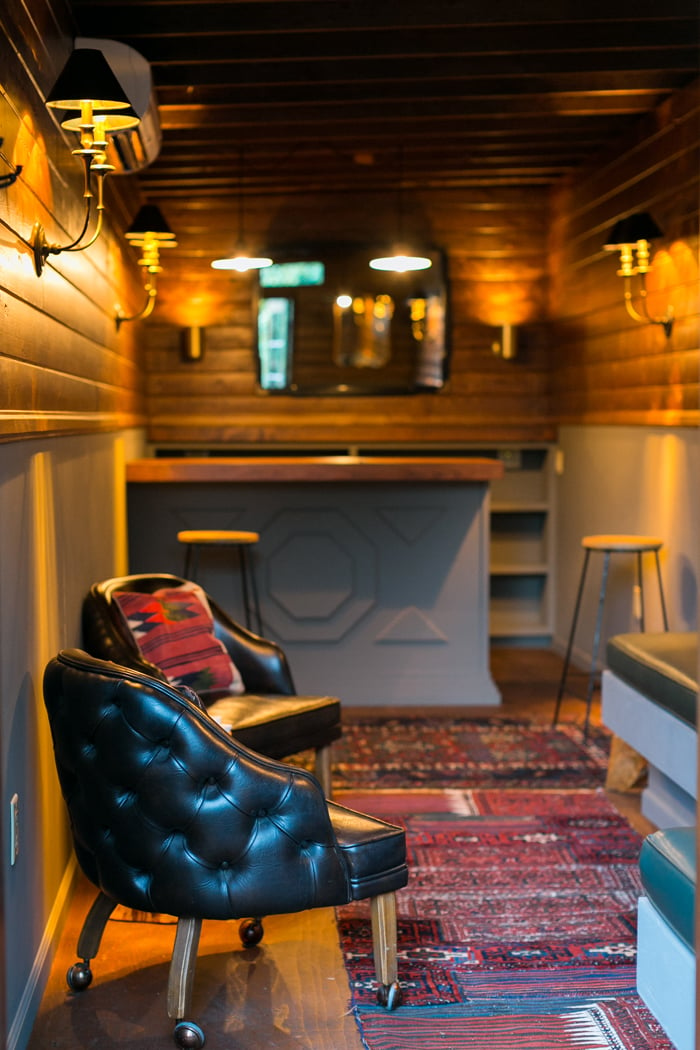 I wasn’t there to style these photos (they were actually just there to do the exterior and Steve asked them to quickly shoot The Fort. Of course I’m dying to stock that back bar, put glassware there, move that pillow on the chair and stick that stool back under the bar. And yes, we designed the bar to work with the interior of The Fig House with the custom octogonal millwork.

I think they took down the mirror in this shot below because it showed reflection of the camera, but picture that back in the shot. 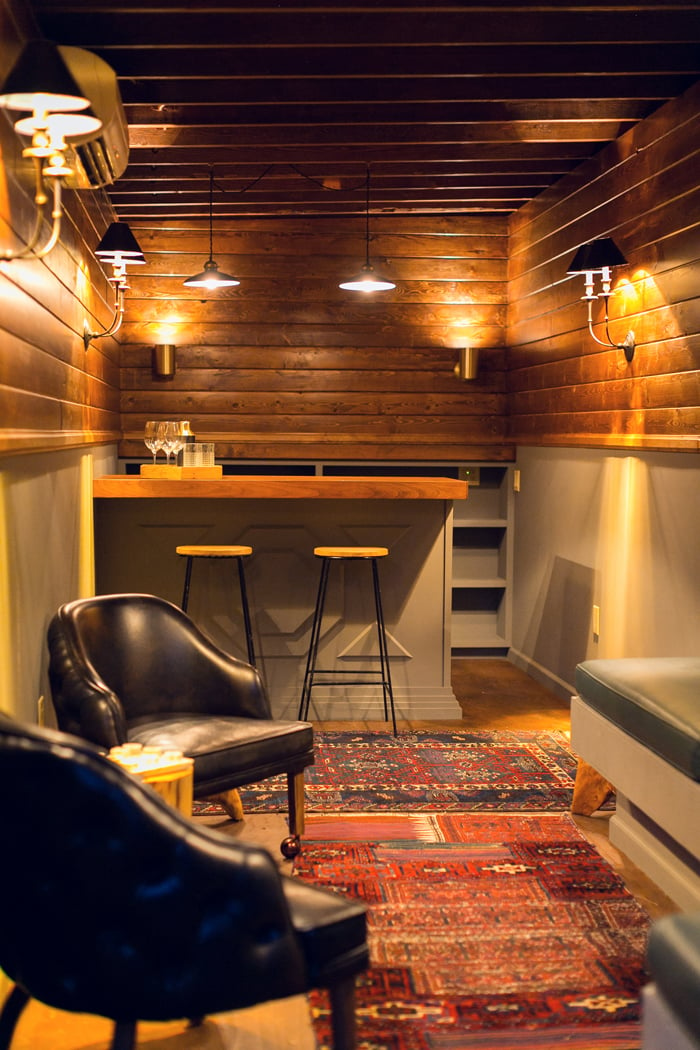 Those back sconces look a little less good without the mirror to help hold that wall, visually, but you can see now how getting the additional sconces to work with the other four was hard. The other sconces have a 13″ height above the jbox, so whatever other sconces we got needed to also create something that visually took up the same amount of space.  Since the gold sconces are uplights I think it works well enough. So tricky.

So there you have it: The Fort. Grab some dudes and suits and yet yourself to The Fig House for a wedding, party, or your very expensive sweet 16 now.  It was one of those projects that I was like, oh man, we are just way too busy to do this, but Steve said we had to design and install it really fast and in a lot of ways it makes it easier to pull triggers.

Oh hey there Tal (from Pharmacie), you look like you are making some delicious drinks (RoomForty did the food and again i’ll post about that next week).

So what do you think? If we had lots of time and money would I do things differently? Maybe. But for 2 weeks and a few thousand dollars it turned out to be pretty awesome if I do say so myself.

Here’s the quick breakdown: 2 rugs: $510, Vinyl chairs $648, Seat pads labor upholstery $280, vinyl fabric $71, sconces and pendants $406, back mirror $299, 2 stools $200, 4 stump side tables $600, 4 vintage kilim pillows $88, messenger fees $110. The painting and staining of the interior was $1500, the bench construction $600 and the bar $800. The total = $6, 112. Its crazy that we still spent that much … but things just add up when you want things done custom. Our budget (without the painting) was $3, 000. So yeah, we were over, but I honestly don’t know where i’d cut it down. Sure we could have bought cheaper rugs but those rugs really bring in so much warmth, texture and character and they weren’t really expensive. Ikea rugs would have made it look so cheap and boring.  Stuff just costs money, folks. And not spending enough some times is not worth spending any at all.

So if you are having an event in LA and want to book The Fig House, you now have a pretty dope little man cave, called The Fort, to play your masculine party games. What do you think?

For more of The Fig House Reveals: The Bridal Suite | The Stained Glass Design | The Lounge | The House Tour | The Oh Joy Party