If you follow me on ANY social media you have seen a lot of stained glass on my feed – mostly from Judson Studio and The Fig House project. Hell if you’ve breathed near me in the last year you were likely to hear about The Fig House. And Charlie. Hopefully y’all aren’t sick of hearing about this project, it was just huge and there were/are so many design components to it, so its taking a while to document them all. I wrote about Judson Studios a month ago, but now its time to document what we actually did with them.

Lets bring you back to the beginning (and read this post if you haven’t). When I first signed on for Fig I said ‘Stained Glass’ immediately. I had been wanting to do a project with custom stained glass so bad and this seemed like the perfect one.

So let me guide you through the project (and yes, there is a whole video at the end): 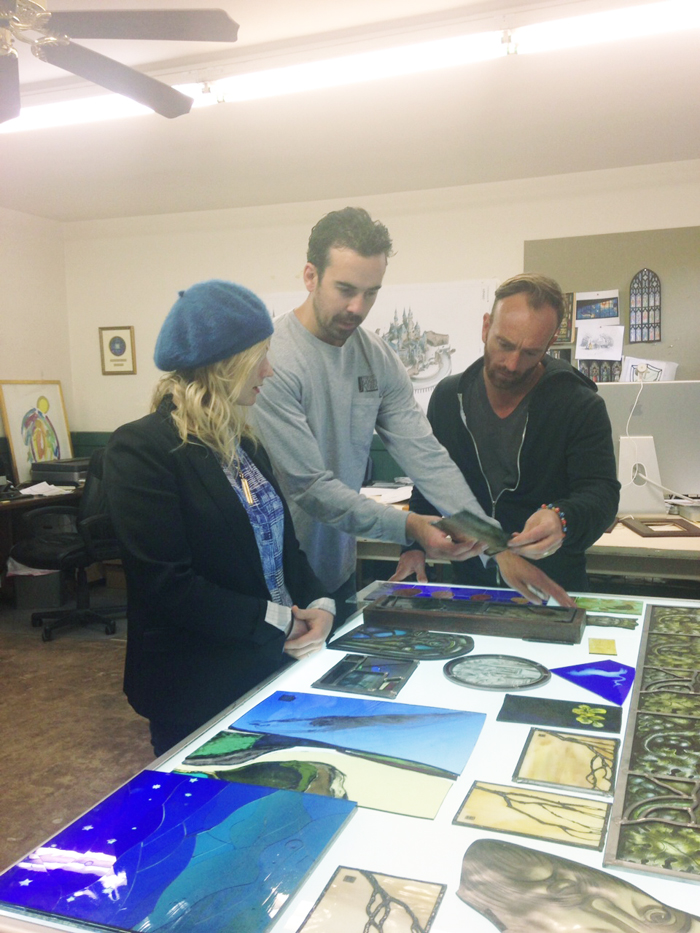 First we met with Tim Carey, an artist, at Judson Studio and talked about general art direction. I said I wanted something geometric, modern, saturated colors and large-scale. He said that they hadn’t done that before (mainly because it’s not what clients want) and he was psyched to get started.

So he sent through this first sketch with some initial ideas: 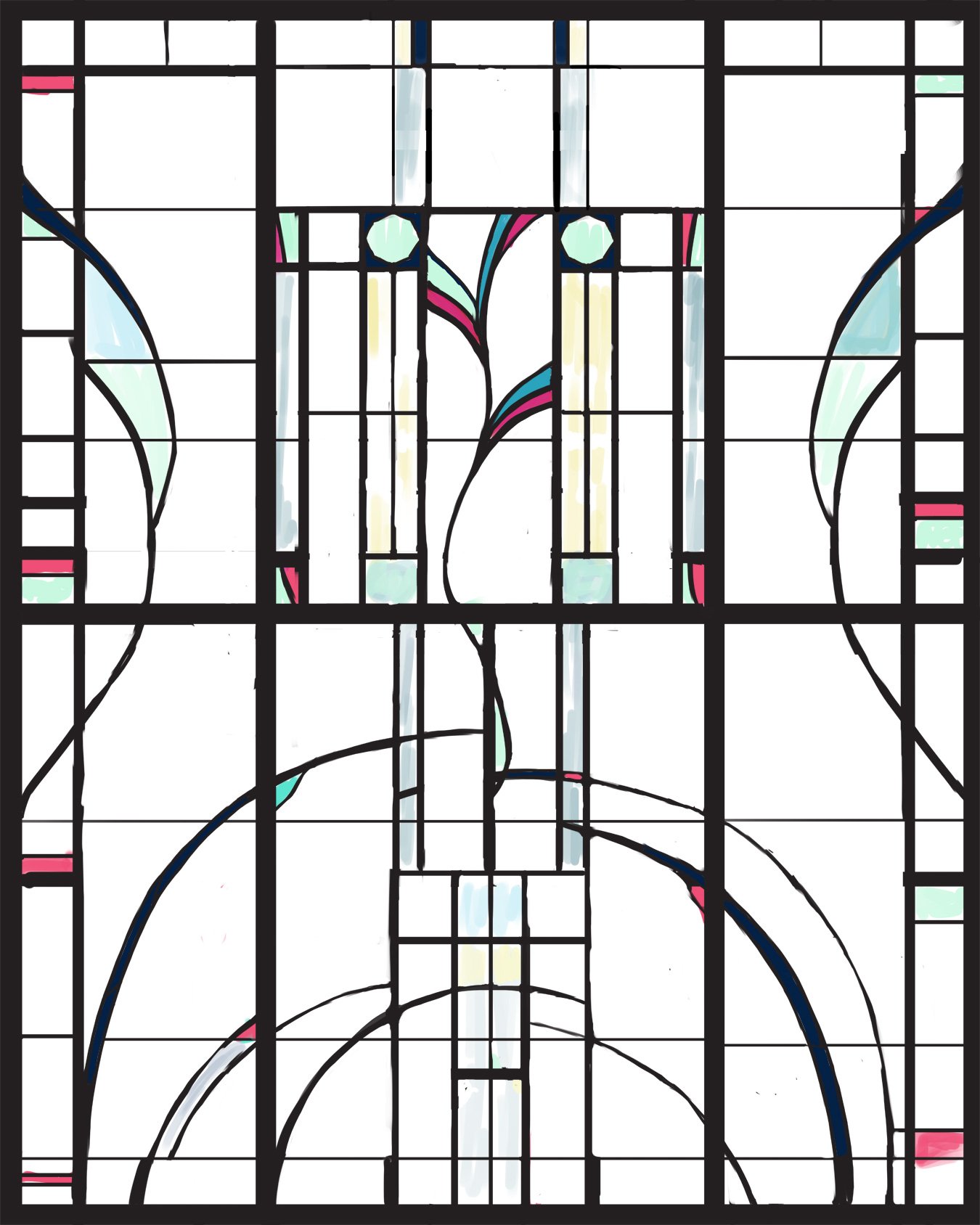 It was so fun to see the potential. We really liked it but it didn’t quite feel modern enough. It felt too fluid for a new build, not quite geometric enough.

And Tim totally agreed. So easy to work with. So he went back with our notes and came up with this pattern. A common motif throughout the Fig House were octogons, so he took more inspiration from that and started the process again: 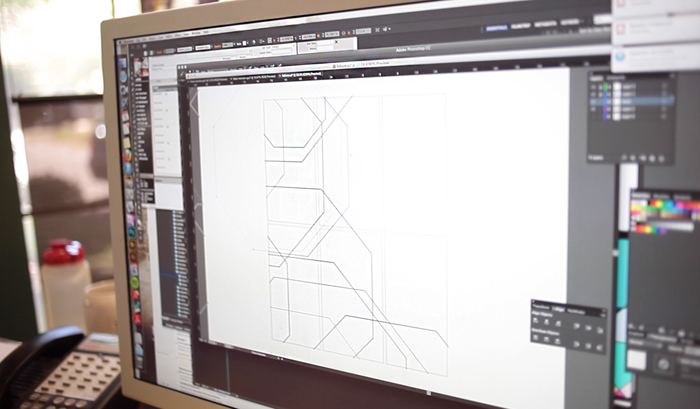 He sent this through and we flipped out, in a good way: 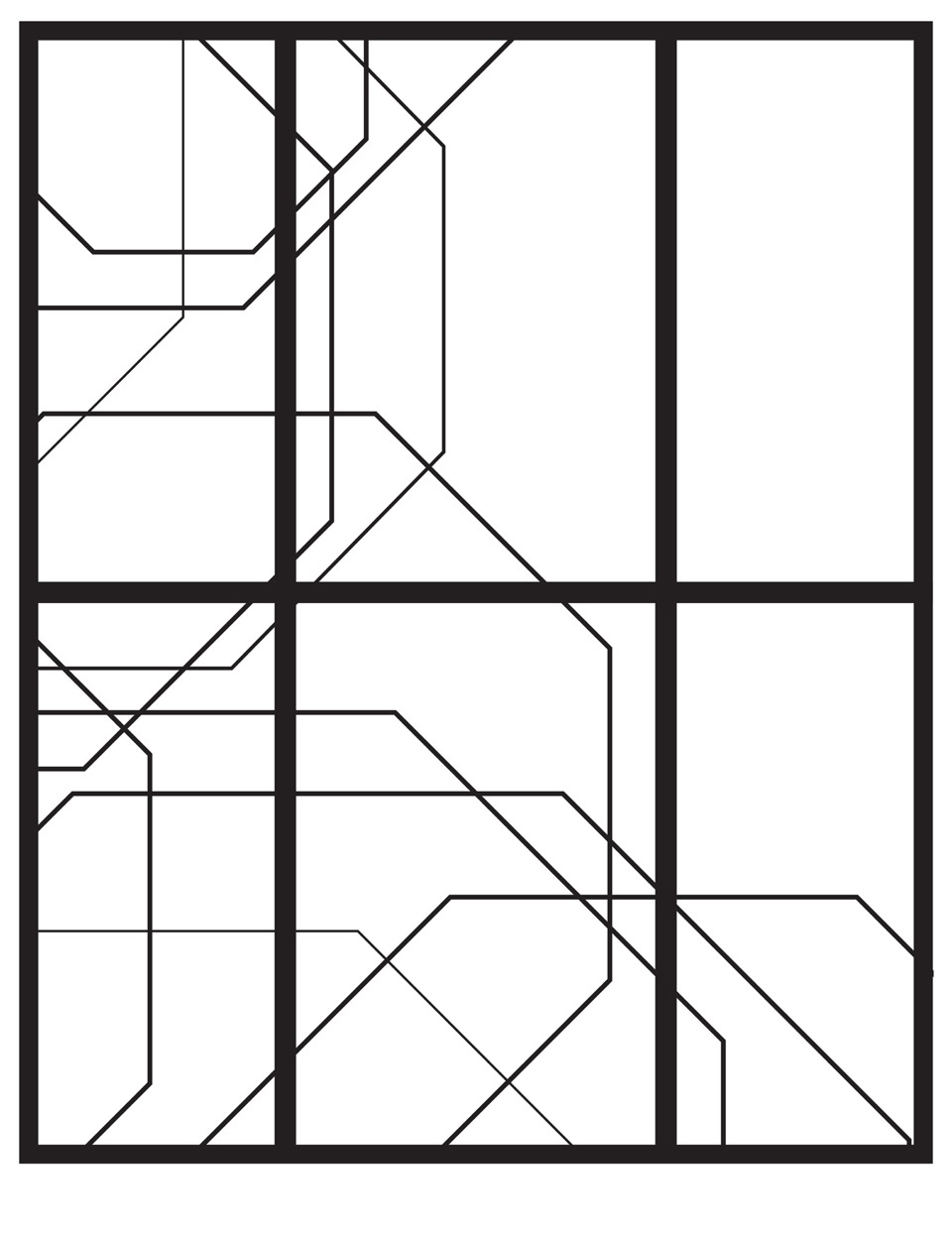 Yes yes yes yes yes. The thick verticals and horizontals were the window frame.  It was a 12′ window I believe so it had to have mullions help supporting it. Yes, I say fancy words like ‘mullions’ now. Hopefully I’m correct in the usage …

Next he printed it out, all life-size which was sooo fun to see. 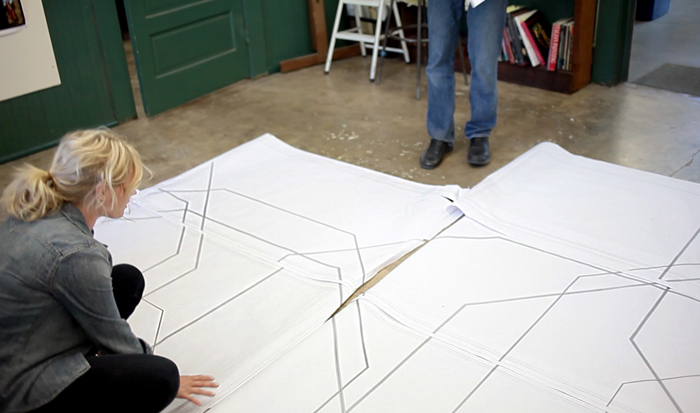 He took a first pass at color and sent us through this: 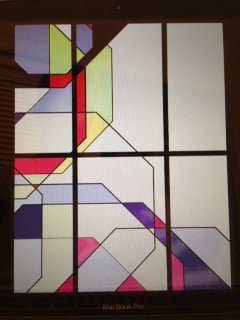 Sorry, its fuzzy. I think it was just a screenshot of his computer. We liked it but it wasn’t quite the colors that we were working with.  So we went in and played with the color combo for hours. 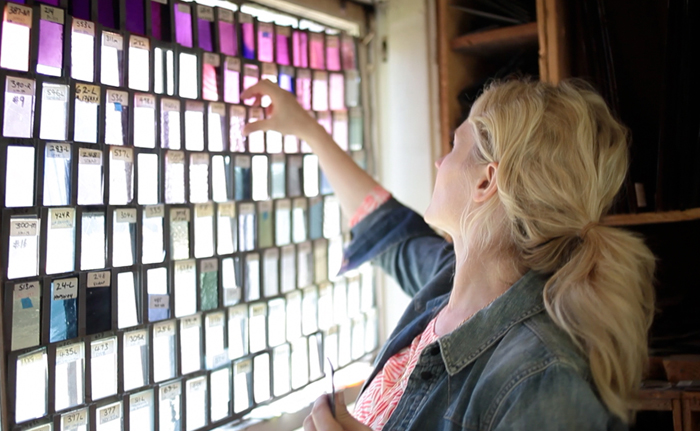 They had one million colors to choose from and they keep them all in the window which is pretty much the happiest thing I had ever seen. Now all I want is colors of stained glass in my windows. All of them. 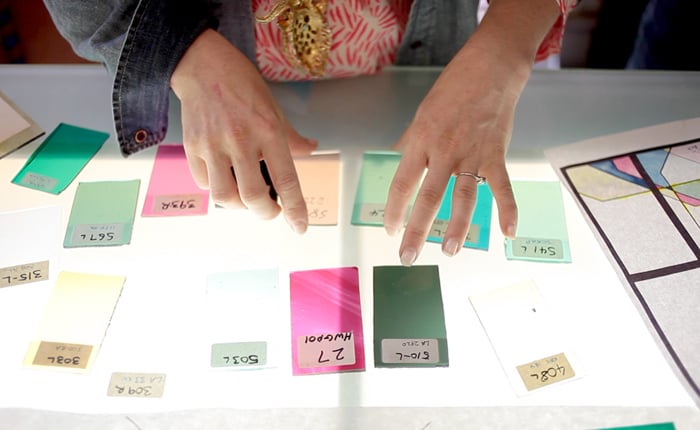 Ginny and Dean were there, too, helping every step of the way we just took these photos on a day that they weren’t. But there were three of us helping to make this very intense decision.  What we basically ended up doing is choosing 10 or so of our favorite colors and let Tim do his thing. We knew we wanted the more saturated colors (the hot pink and teal) to be more accents, but otherwise I just said go for it. 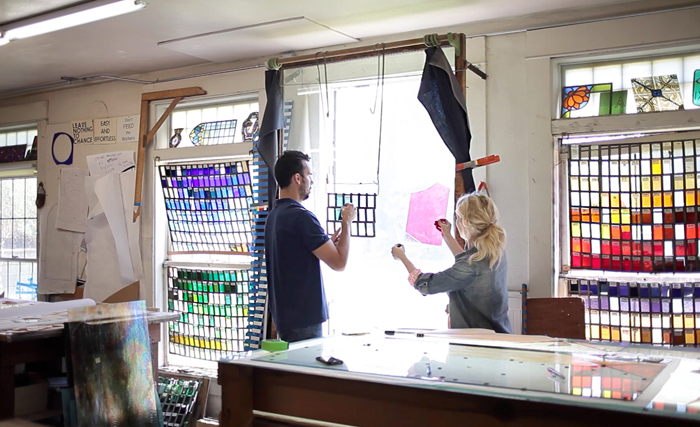 Also I was pregnant, clearly. So weird how I look at these photos and I’m nostalgic for pregnancy when I totally hated it at the time. Oh, Life. You are so funny. 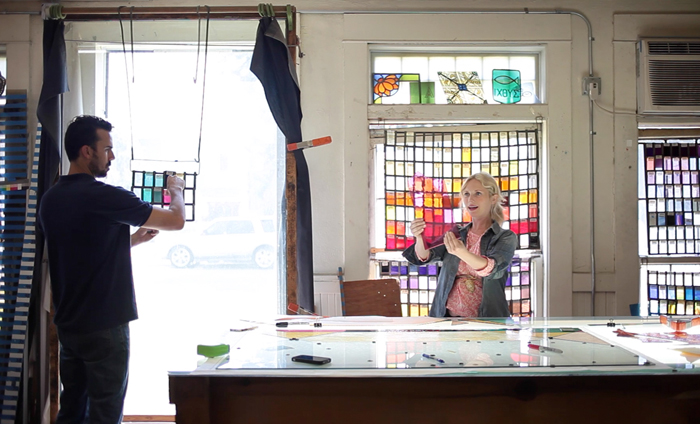 After I gave him my color selections he started plugging them into the rendering and playing with composition. 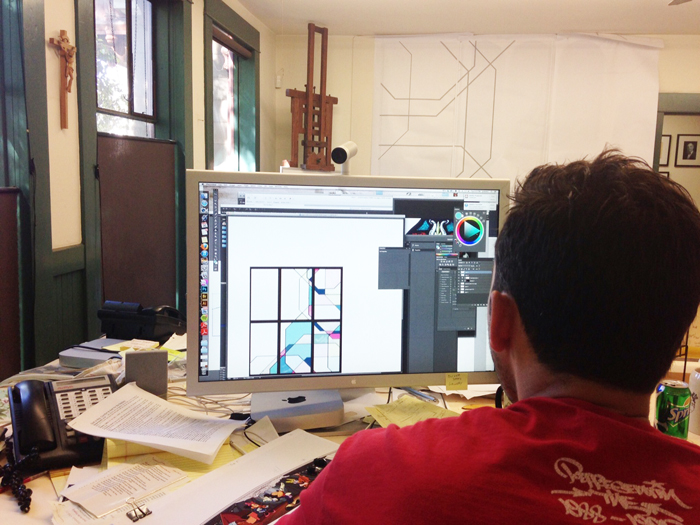 We went back and forth a few times can you move the dark blue here, can you balance out the light pink more over there and it was HONESTLY the best collaboration I’ve ever had with another artist or designer. He was just so enthusiastic, passionate and amicable. 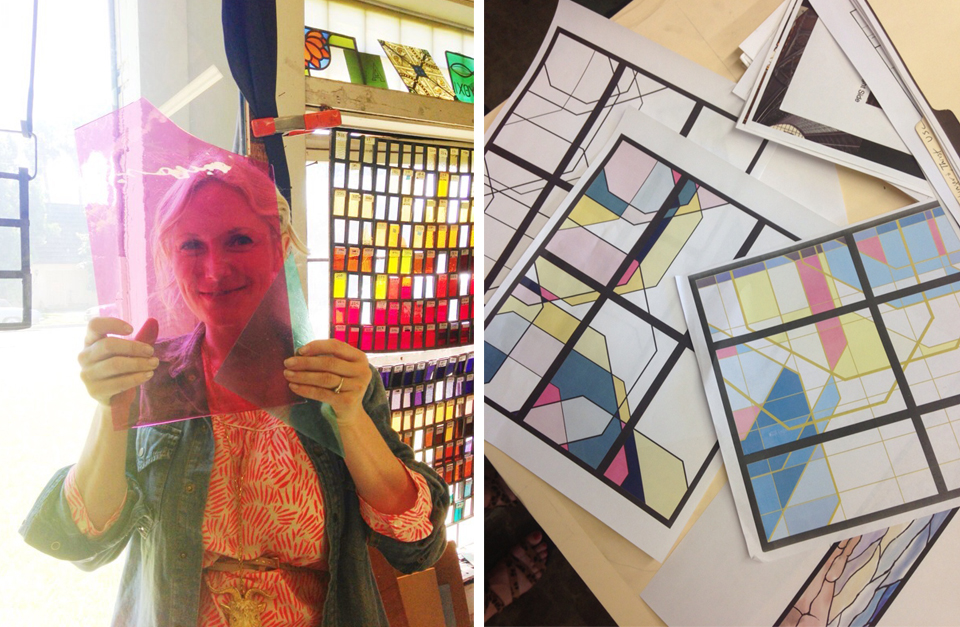 After colors were decided and the pattern was finished they started actually making these doors. And, friends, it is QUITE a process. It’s so skilled. So particular. So nuanced. Its nothing something you just pick up as a hobby (I mean, you can but … you know).

They cut out the pattern in paper and use the paper to trace and cut the glass. 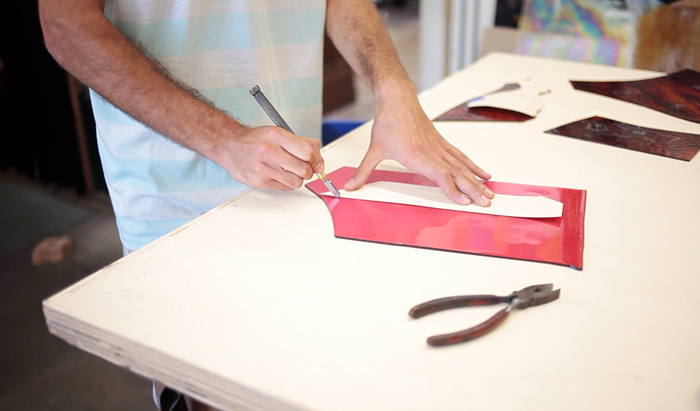 Then they lay it out on the table and start assembling it together. 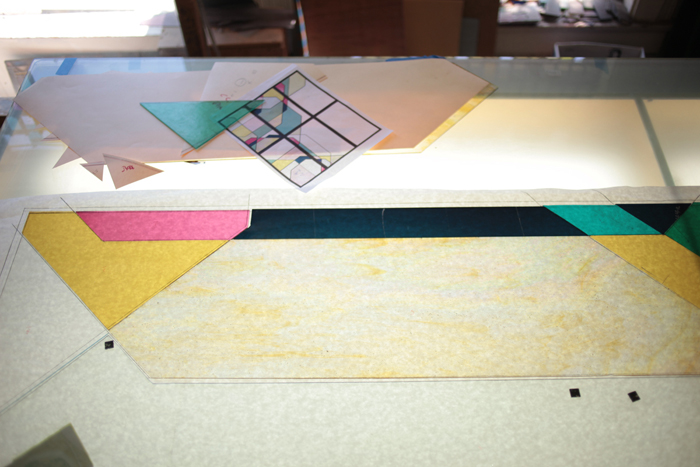 We did something different, something they hadn’t done before in decades with our stained glass: brass leading, or the technical work is brass ‘came’. Normally its silver, but we asked if they could do brass and they were all ‘uh, why? is it 1987?’ and I assured them that it’s what we wanted. Just look at it: 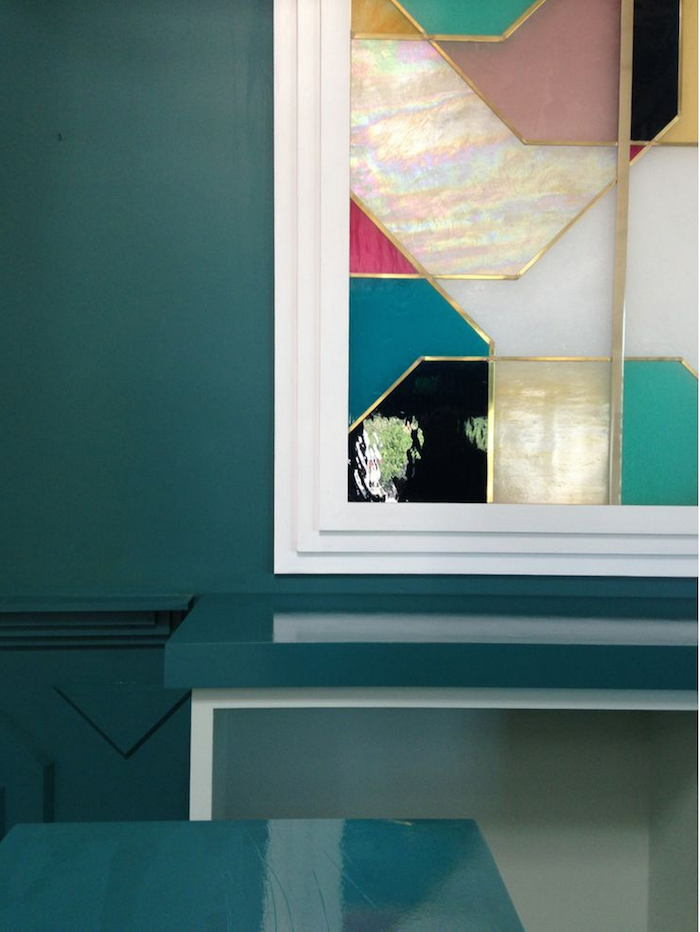 That is the detail of the glass above the bar. It has a light box behind it and is just so beautiful:

Those are the Pharmacie dudes, mixing some the most delicious cocktails at the opening party.

There’s pretty much no happier place during the day than The Fig House with those stained glass doors. The colors of the glass are so beautiful. The space is so bright with so much natural light. It’s a photographers dream (and yes, you can rent it out for daytime shoots). 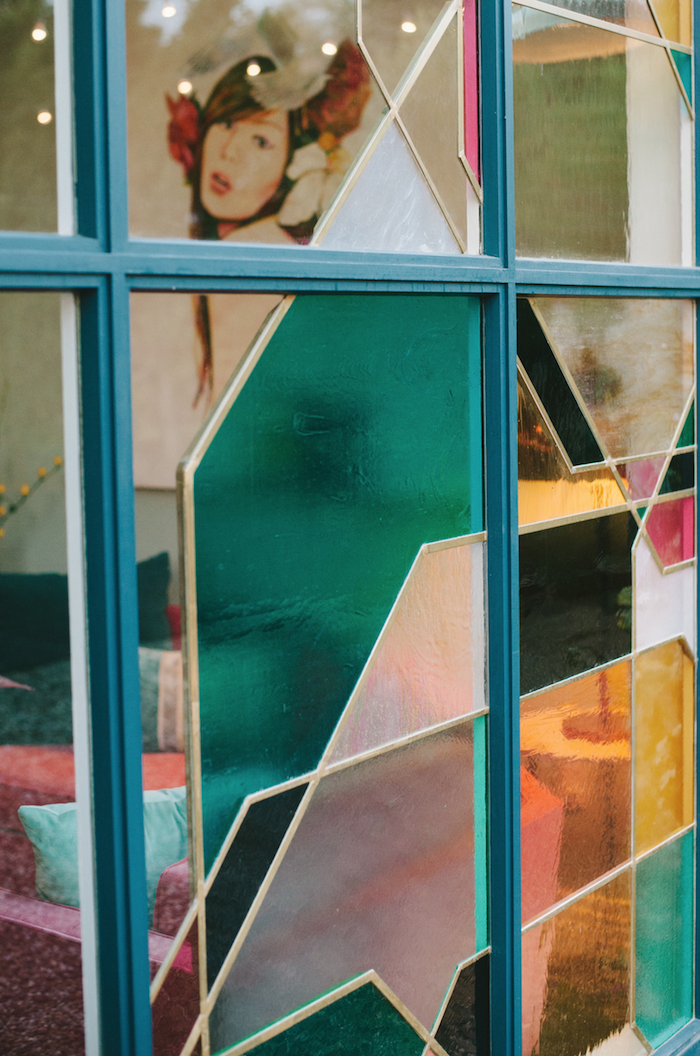 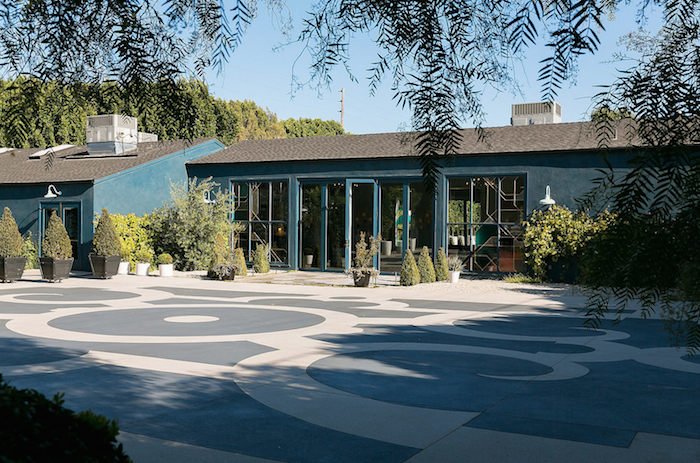 Landscape design was by the Allen Compton, of Salt Landscape Architects who was also amazing to work with. Don’t worry, you’ll get a landscape process post soon, too.

So want to see the whole project in action? My friend Tessa Neustadt made a video documenting the whole process.  Check it out and you know, share it if you are into it:

A huge thank you to Judson Studios  and Tim Carey for working with us so hard to come up with designs for what is undoubtedly the anchor of the design of The Fig House project. Tim, you are a lovely human with an extreme amount of talent. Please keep making beautiful stained glass.

If you are new to the project check out the progress posts here,  here and here.  The mood board here, and the opening party here. Also watch the makeover of the lounge, man-cave (called The Fort) and the event space. More to come – I mean, this project will be the most documented project in all of mankind 🙂

For more of The Fig House Reveals: The Bridal Suite | The VIP Man Cave | The Lounge | The House Tour | The Oh Joy Party