Hey guys, Its Emily, real quick. In case you are new to the blog and are wondering who the hell is this dude,  Orlando, here’s a recap of our relationship: Orlando was my assistant/sidekick on Secrets From a Stylist (RIP) and then became an associate designer that worked with me on design projects for close to 4 wonderful years where we became very close (like sleep in the same bed while traveling, close). He used to write posts on the blog but then HE LEFT ME to become the West Coast Creative Director of Homepolish, a design startup that’s a huge game changer, making design more accessible, streamlined, and enjoyable to clients all over the USA. Anyway, onto his post!

Have you ever realized you were obsessed with something you didn’t even know you were obsessed with? This is kind of how I’m feeling about lighting at Orcondo (yes, I am actually calling it that in real life because I am the world’s worst person). I never really knew how much I cared about lighting until I started designing this place from the ground up, realizing that if I made a bad lighting choice it might render the remaineder of my life meaningless. It might lead me to see life in a terrible light.

You know what I’m talking about. Have you ever been to a party where you’re not having a great time and then you realize it’s because there’s fluorescent lighting and everyone looks like Walter Matthau in ‘Grumpy Old Men’? And then you’re like “WHY DON’T YOU HAVE A DIMMER SOMEBODY DO SOMETHING!!!” And everyone looks at you and is all “oh my god thank you.” And then you all leave and the person who hosted the bad lighting party is devastated and you yell at them out your car “THIS IS WHY YOU NEED GOOD LIGHTING!”

Making a lighting plan actually comes way earlier than you’d think in the process of designing or renovating a home. Mainly because if you’re thinking of doing any kind of sconces, chandeliers, pendants, or any other kind of built-in lighting, you need to make decisions about them before electrical inspections and before drywall go up. It’s kind of insane, because you’re making these decisions when you haven’t even seen what the place looks like yet (except for in handy Photoshop renderings). In the condo, we’re moving a lot of lighting and also re-texturing the walls everywhere (they’re a crazy orange peel texture that makes me want to peel my eyes off).

As with everything else, I’m going pretty modern with lighting. Unlike most of the other foundational stuff which I’m staying pretty neutral on, I’m kinda having more fun with the lighting because I figure anyone who moves in after us can always change it out pretty easily. Not that we’re planning on moving anytime soon, I just don’t wanna do anything crazy that makes the place look insane in case I lose my mind one day in traffic and demand that we move to Ojai to live in peace like actual human beings instead of languishing in a city like animals (sidenote: I spend most of my life daydreaming about moving to a quiet place in the country while staring at the picture of Edouard that I keep in my heart-shaped-locket).

Okay, onto what I’m doing with lighting. And I’m sorry this post is so long. I had no idea I had so many feelings about lighting. 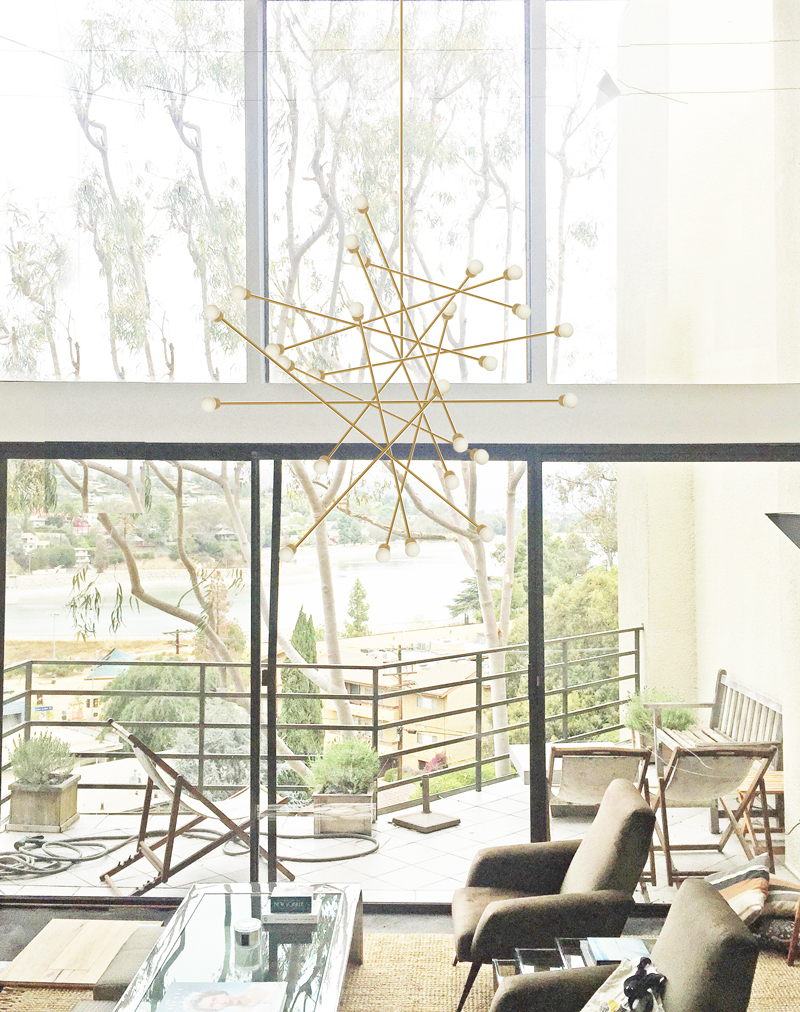 The pièce de résistance (that phrase is ridiculous but I’m allowed to use it now that I’m dating a French person) of the whole lighting plan is this collaboration I’m doing with Park Studio. It’s very unlikely that it’s going to look exactly like this, but this was my initial idea for what I wanted in the living room. The living room overlooks the Silver Lake Reservoir and we have beautiful eucalyptus trees outside that I love staring at. I wanted to make sure the chandelier in there was open and airy enough not to block too much light, but sculptural and beautiful enough to be the centerpiece of the space. I met with J0lene and Ben (Park Studio owners/adorable couple/people who I’d want to adopt if I could adopt adult humans and raise them as my children) this week and went over ideas, but we still have lots of work to do before we figure out what’s going in here once the construction dust settles. 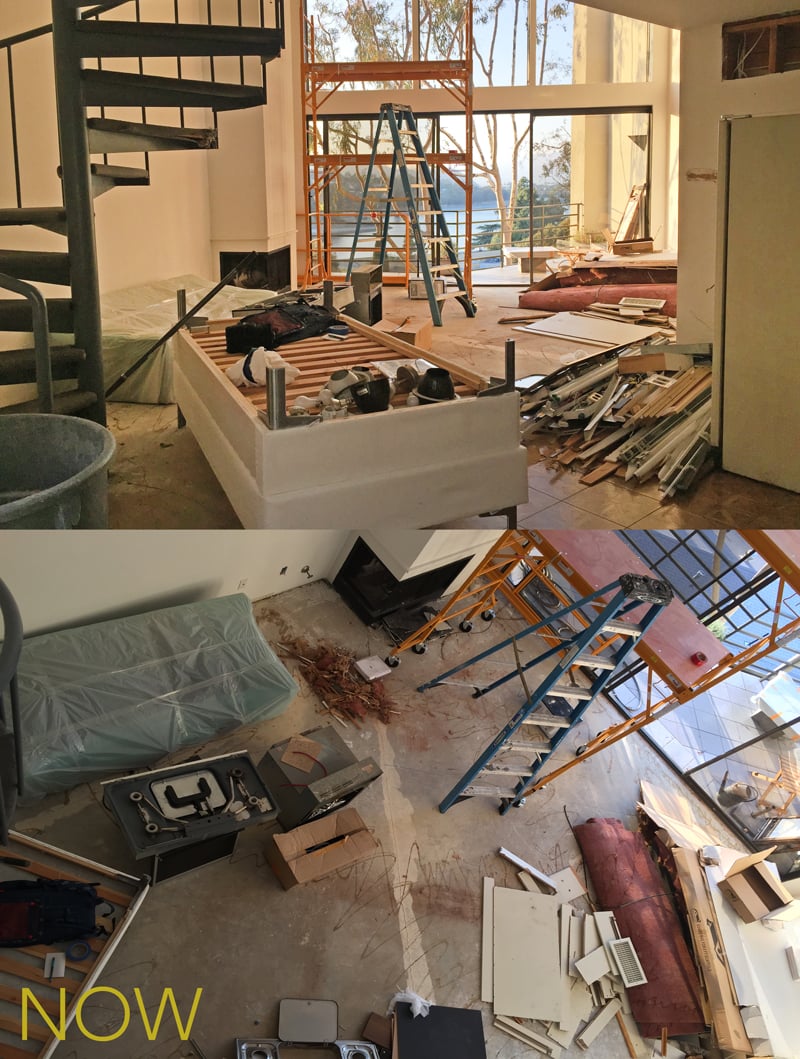 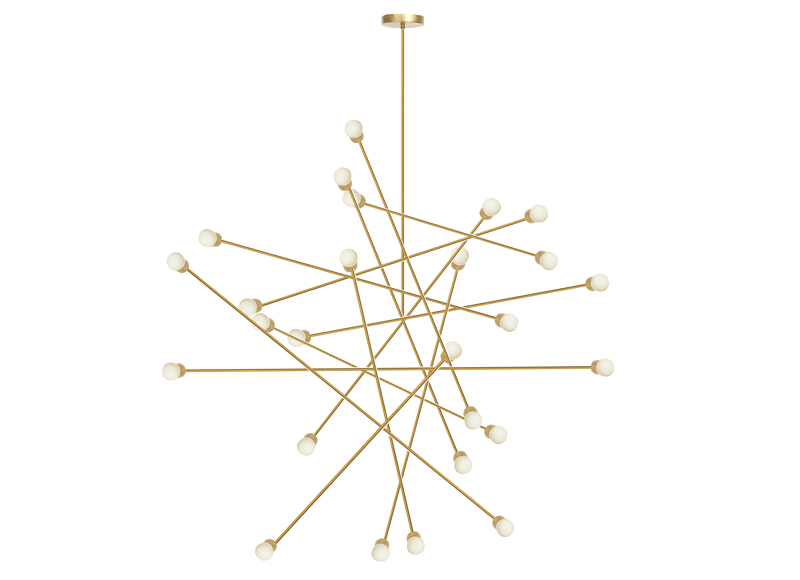 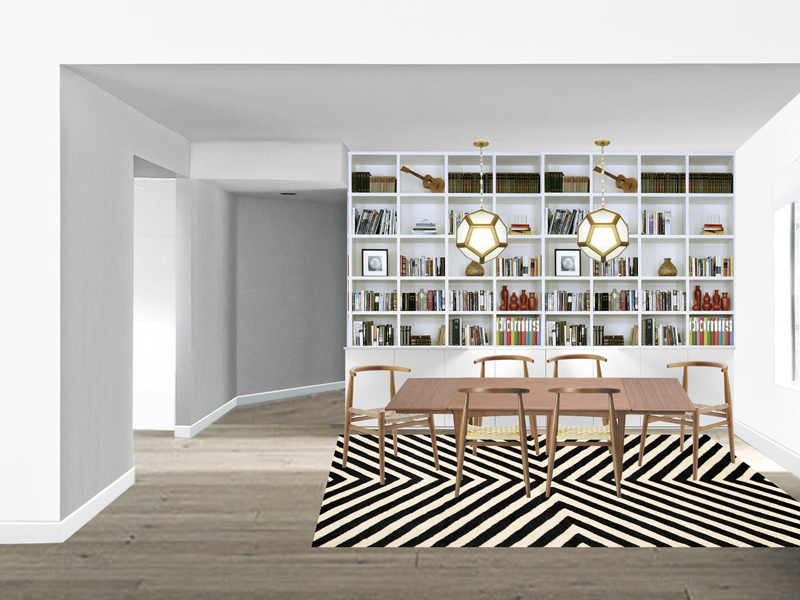 Nothing much has changed since I first designed the dining room. Planning on doing these awesome Mary McDonald hanging pendants from Lamps Plus. I love how geometric and modern they are, small-scale enough so they won’t detract too much from the awesome custom built-in we’re putting in the dining room. 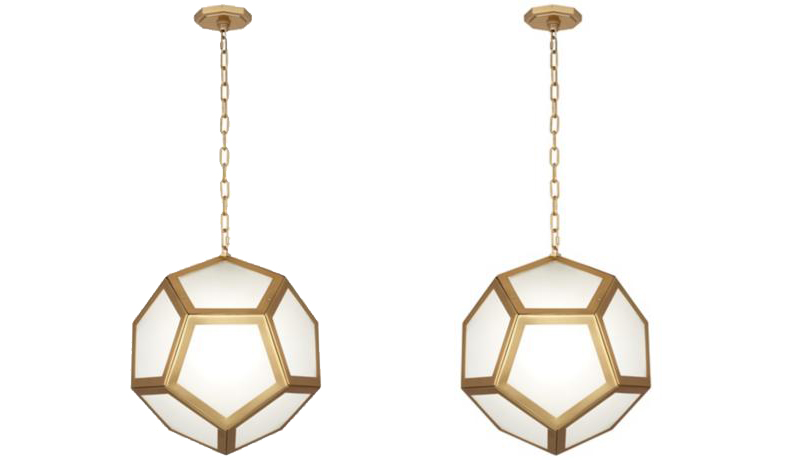 The dining room in its current state (I put that blue tape up to plan the built-in shelving that’s going in there): 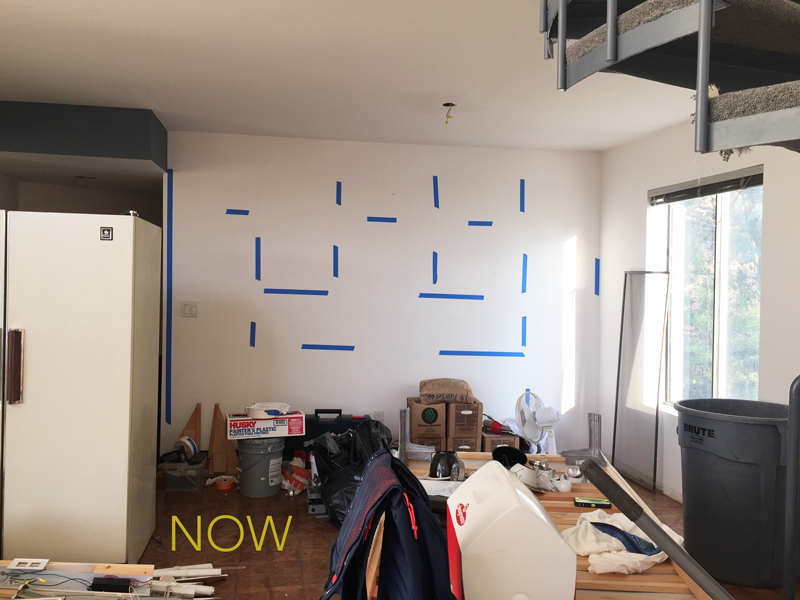 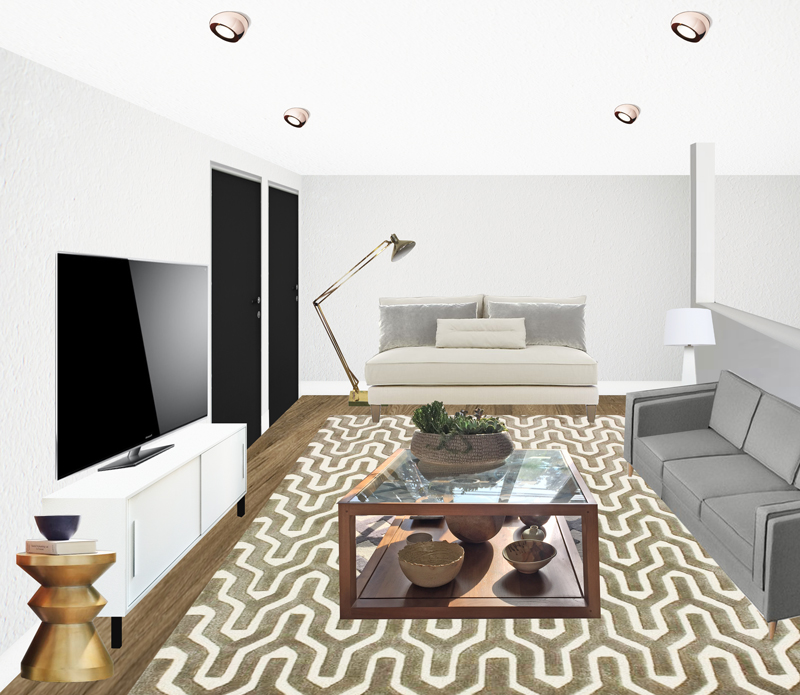 This is one of the more unusual spaces in the condo is the loft. I guess it could be a third bedroom if you walled off that window, but we’re using it for a little television lounge. It’s strangely bigger than it looks and is the perfect size for loveseat and a sofa. The one bummer about this space is that there’s not really a good place to do a chandelier or pendant because the ceiling isn’t high enough. Also, you can see a portion of this space from the living room so I didn’t want to do another chandelier that would compete with our living room show-stopper. So I decided it was probably best just to do recessed lighting in there with a few lamps.

I’ve been looking all over for fun/attractive recessed lighting and, you guys, it’s really bleak out there. After looking at about 7000 white/boring recessed lights, I came across these beauties on the internetz:

They’re from YLighting and they’re the only reason I haven’t declared war on the recessed lighting industry. I love that they have a low profile but still have some visual interest. Their shape references a lot of the mid-century lighting I like and I want to  put them everywhere. Not only in my house in other peoples’ houses. Like I’d break in at night and install them in the dead of night and the people whose house I broke into would be like “OH MY GOD WE’VE BEEN ROBBED. OF UGLINESS. THANK YOU ORLANDY.” In other news, I’m also using Edouard’s cool vintage standing lamp and some great simple/white lamps from Target in the loft for soft, ambient light. 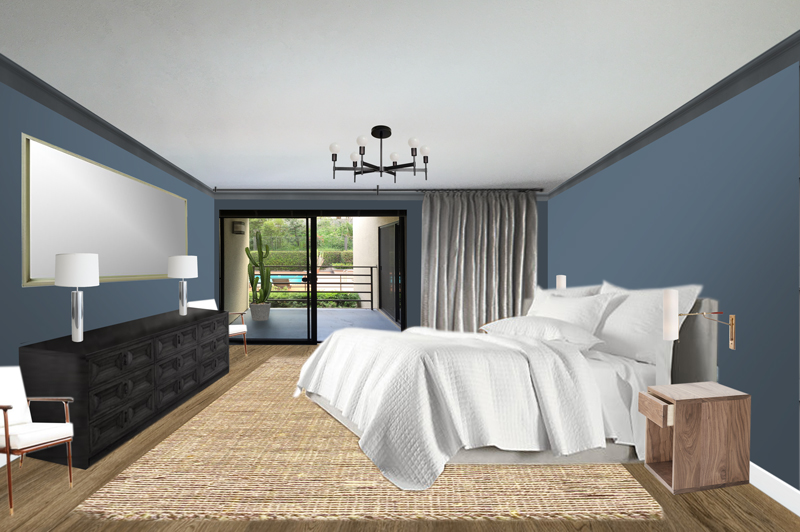 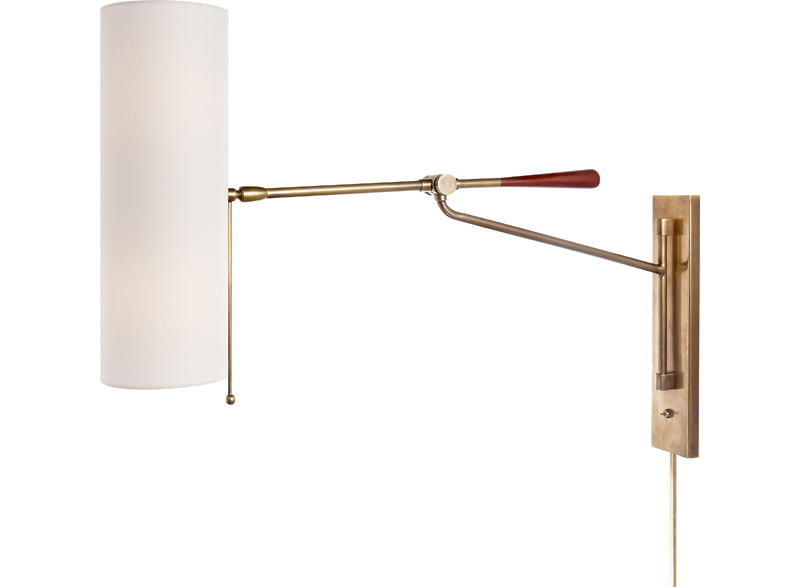 Articulating Wall Light from Circa Lighting

I actually saw these in a magazine and was so excited by them that I threw the magazine across the room and started yelling. After I composed myself I looked into them. They’re pretty redonk and I think I’m going to put one on each side of the bed. Speaking of redonk, the only good pic I could get of the bedroom (because it’s filled with garbage) looks like this: 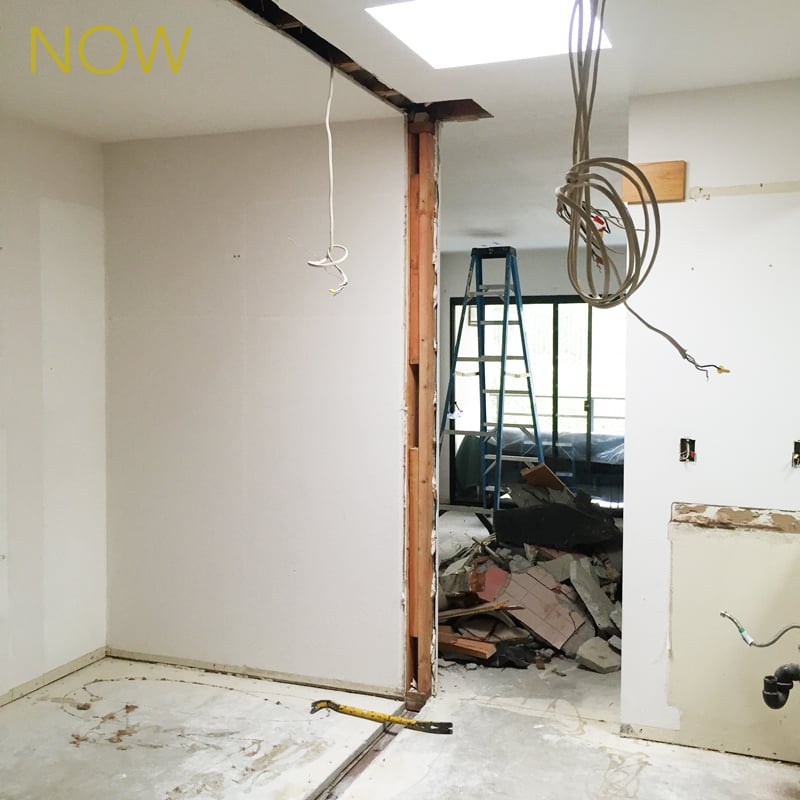 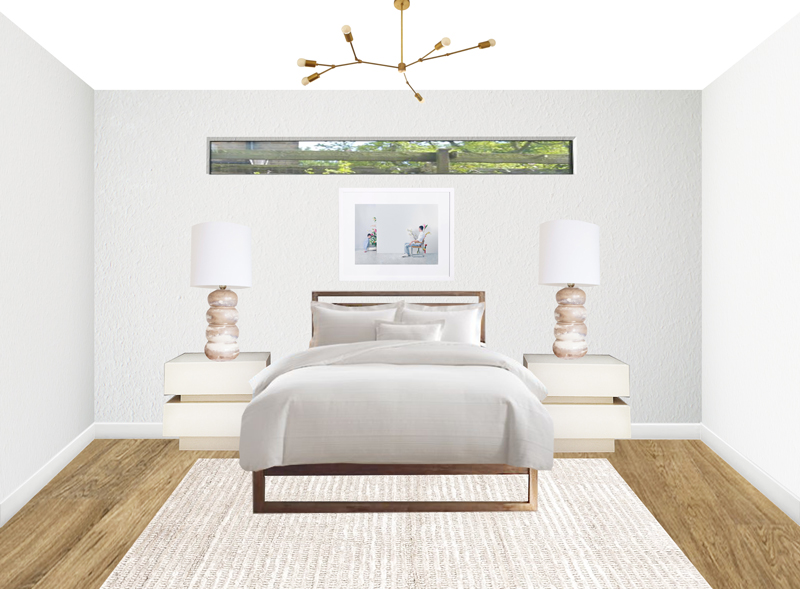 The guest bedroom is actually getting all the castoff lighting that I already have. But I don’t feel that sorry for it because love those pieces. I found the chandelier at the flea market with Emily a long time ago. The dude who sold it to us was all “it’s vintage, mid-century.” And I was like “really because it looks like new DIY?” And he was like “Yes, it’s an original light sculpture from the 50s. With brand new wiring.” Long story short, I took it home and asked a handyman to install it but he refused because he said it was dangerous and almost killed him so I looked up how to install a chandelier online and I installed it myself. Let this be a lesson to all of us to be wary of basically anything anyone says at the flea market. 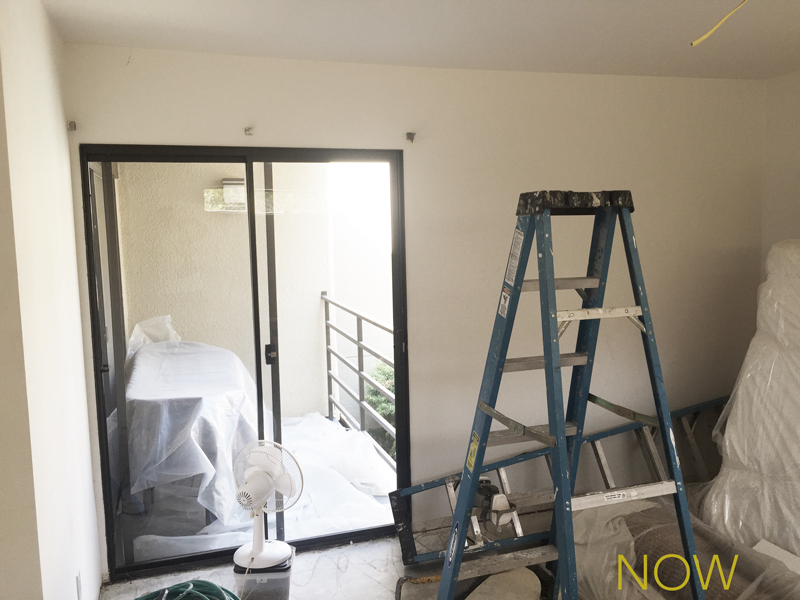 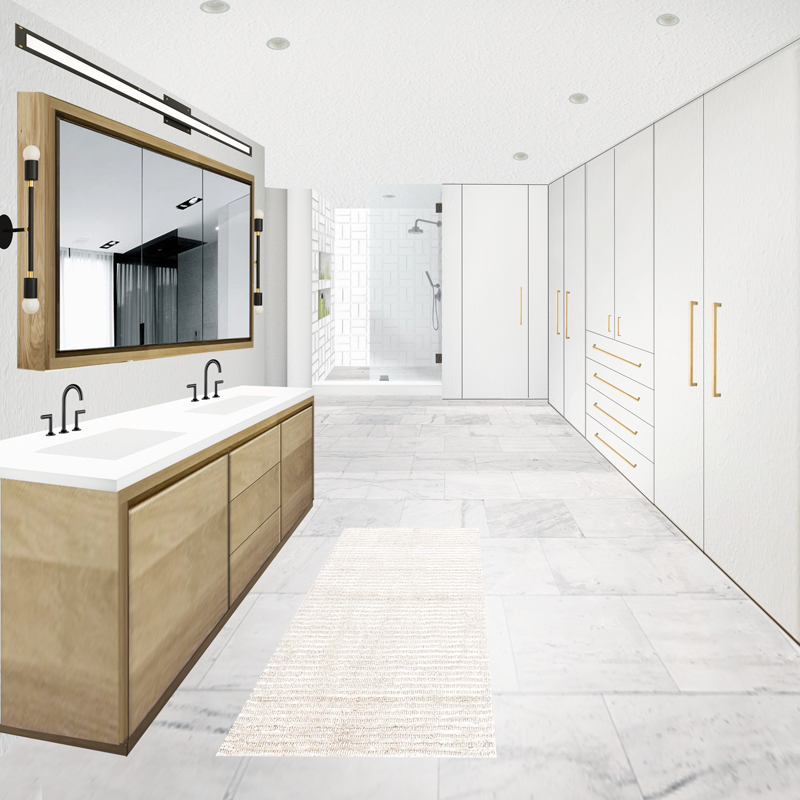 I loved the simplicity of this light bar from AllModern for the master bathroom. I also love that it pairs perfectly with these delightfully plucky sconces from Park Studio. Right now the bathroom pretty much looks like a scene from a horror movie where a demon pops out of the mirror and drags you back into it. We ripped out a wall that used to be a closet to open up the space and now there’s just live wires hanging everywhere, waiting to electrocute us to death every time we go in there. 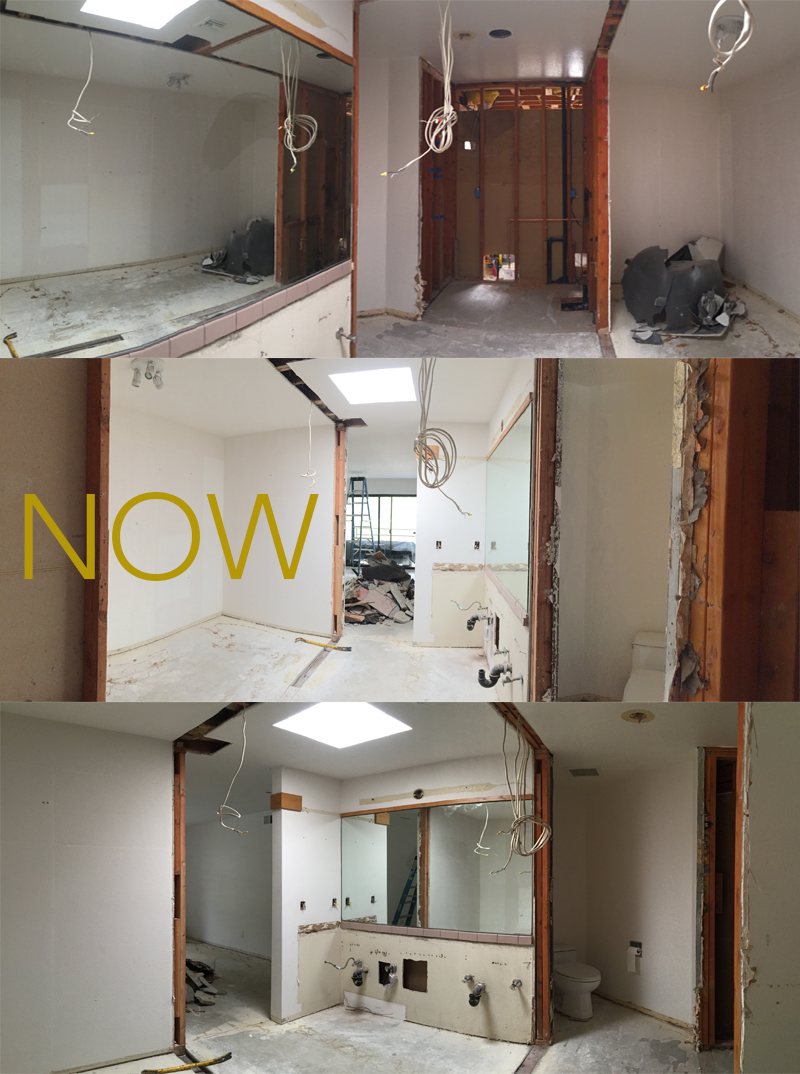 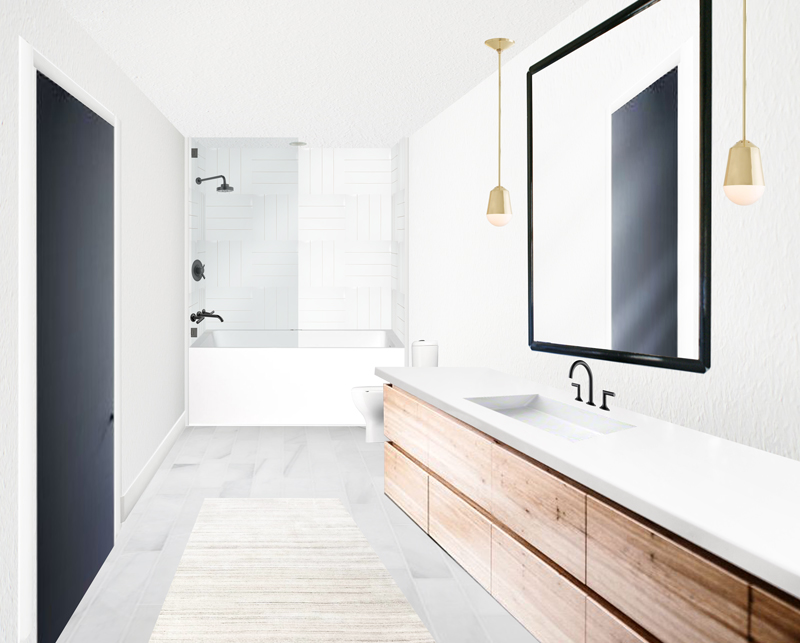 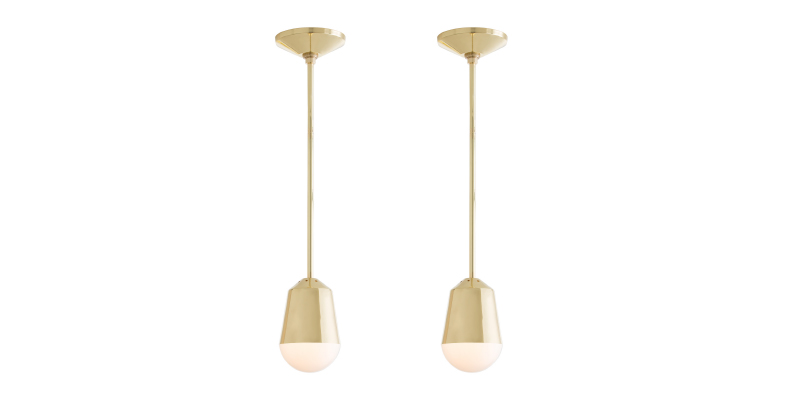 Going pretty simple in the guest bath. Using a giant black mirror I found at Goodwill flanked by these amazing Arteriors Sconces from AllModern. You know what’s not simple? GETTING EVERYTHING YOU WANT ALL THE TIME.

Let me explain. We wanted to rip out that whole wall next to the toilet. But unfortunately, due to some plumbing/pipe issue that my contractor tried to explain to me and I totally stopped listening once the explanation got boring, we can’t take the whole wall down. We have to leave a dumb little portion of it there. A pony wall. It’s not my favorite thing that’s ever happened but it’s better than that whole wall staying there. THAT PONY WALL MAY TAKE AWAY MY UNOBSTRUCTED VIEW OF THE TUB BUT IT CANNOT TAKE MY FREEDOM. 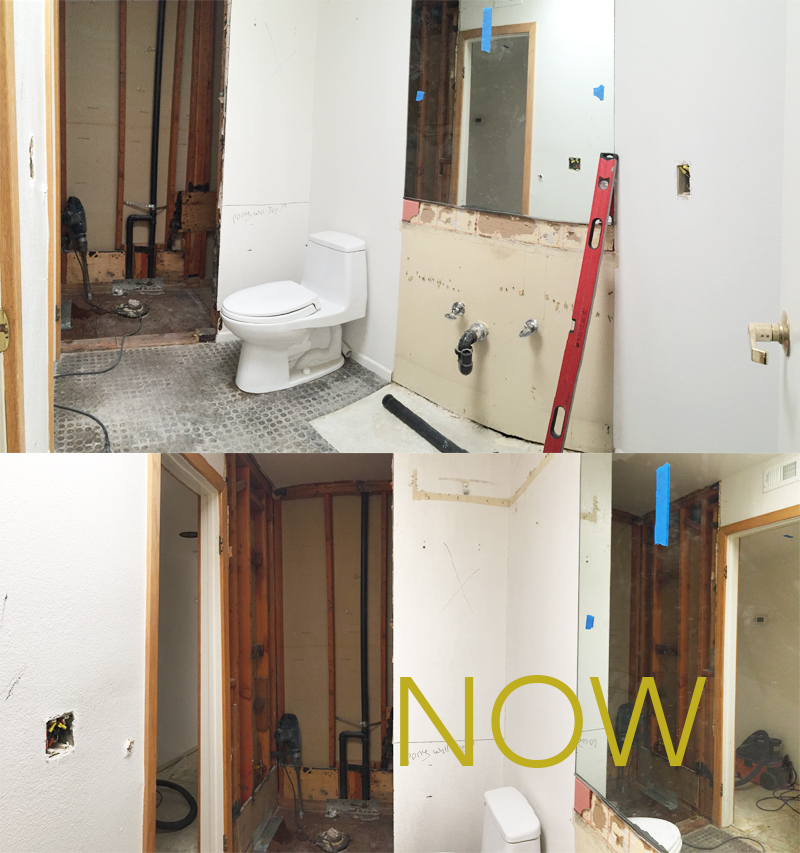 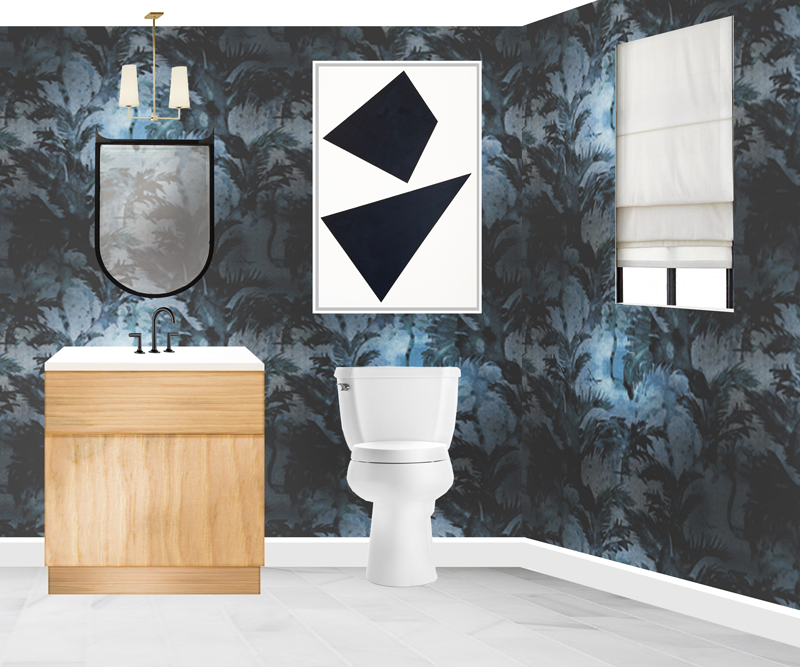 Not sure if I’m using this wallpaper from Eskayel or not, but I’m deeply attracted to it. It mixes the three best things on earth: watercolor,  palm trees, and indigo blue. 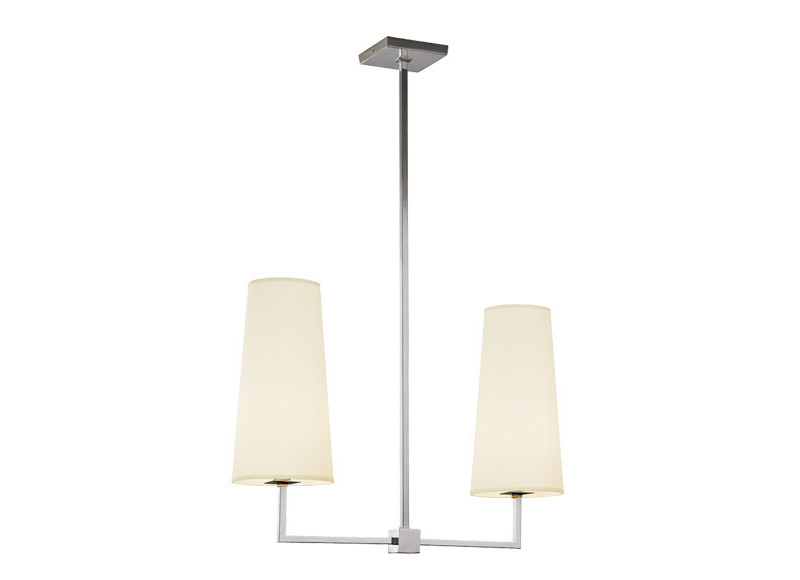 I love this simple pendant from AllModern. You know what’s not all modern? The loft bathroom, which looks like an 80s explosion of Legos from hell. 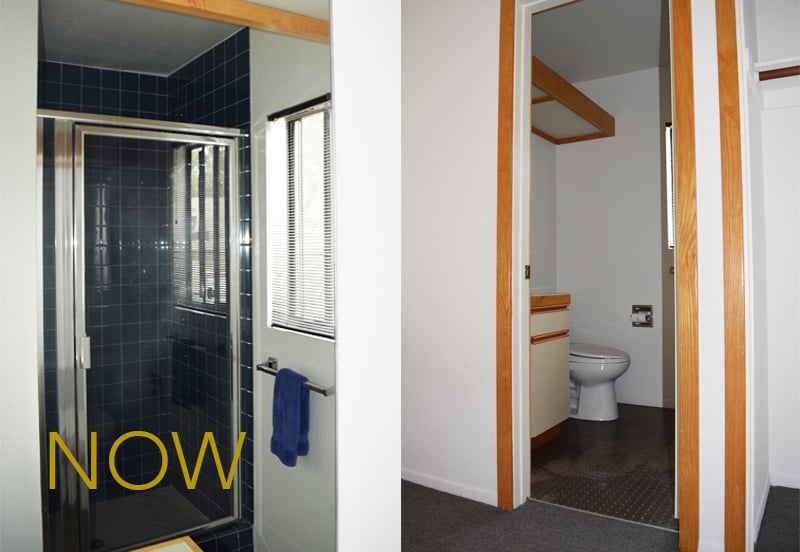 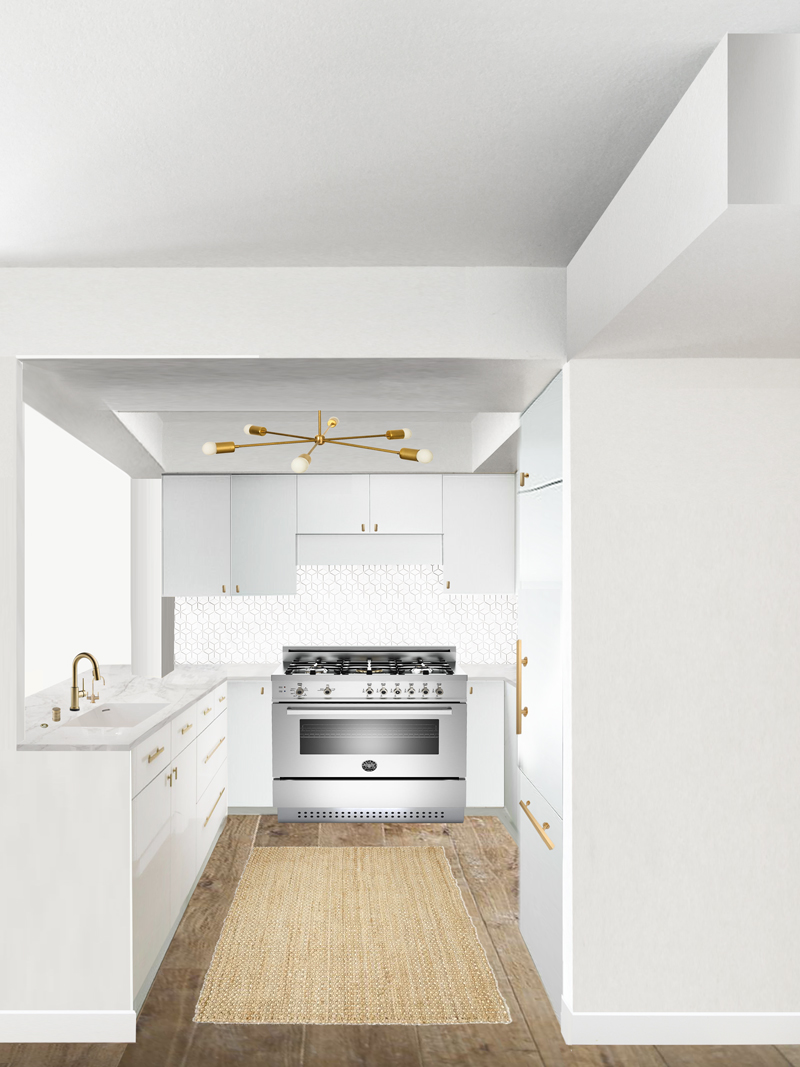 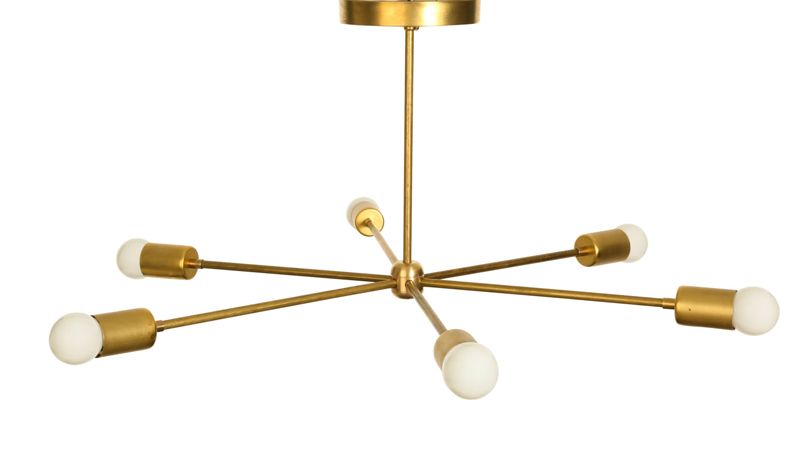 In the kitchen, I wanted as much light as possible so I’m opting for this Park Studio starburst ceiling mount fixture. Probably going to do it in simple black so it doesn’t compete with the brass chandelier in the living room. Obviez, also doing under-counter lighting in there to illuminate the counters so I don’t chop my fingers off while chopping carrots. 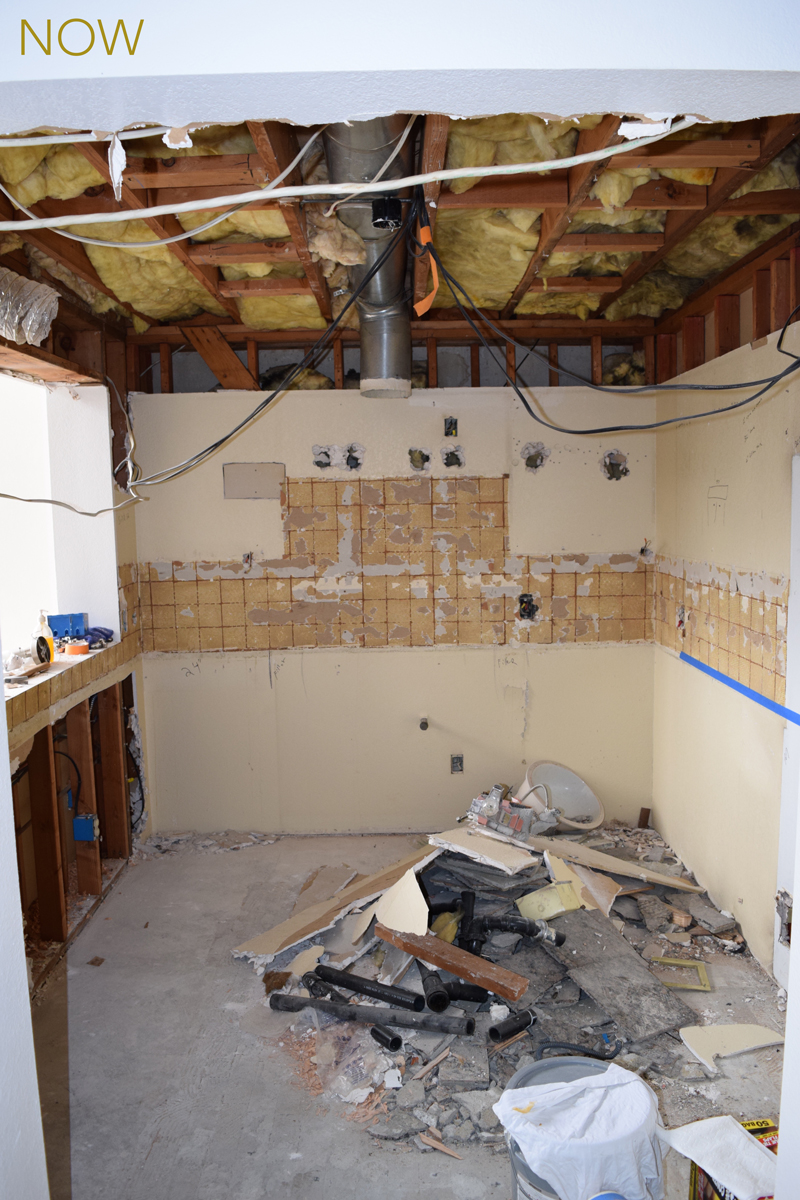 The kitchen is going to be one of the bigger transformations. We were able to knock out a lot of the ceiling soffits and blow out the wall between the kitchen and dining room. There’s a support beam in there so we can’t get rid of it completely, but it’s going to be way more open than it is  right now.

Okay, wow. That was a lot. I have a lot of feelings about lighting and apparently I’m not afraid to express them. If you want to see the other five million lighting ideas (along with ideas for furniture, finishes, etc), check out my Pinterest page for the project. It’s kind of one-stop-shopping if you’re looking to decorate or update your place. I’ll be back soon with updates from the magical world of Orcondo.