Ian Brennan wears polyester wranglers and white v-neck tee-shirts everyday – but in a good way. He’s like a Hollywood cowboy.  He is a co-creator of Glee and has a black belt, but is obsessed with history.  So doing his style diagnostic took a few days to figure out. What i came up with was a mix of masculine antiques, global pieces, and 60’s mid-century.  He loves FDR, Mexico, and the Beatles. But he’s still a dude and at the time he was a single dude so i needed it to be layered and styled and full (because hes NOT a minimalist and didn’t want it to be cold and modern) but still masculine.

I purchased the coffee table at HD Buttercup and it was  a splurge at $1200, but i’m still so glad we paid it because it’s the most functional table ever – it’s huge but indestructable so when people come over everyone throws all their food and drink on it and not a mark is left. It also grounds the living room, plus it’s edgy so it brings an immediate ‘cool dude’ vibe. Remind me to never say cool dude again. 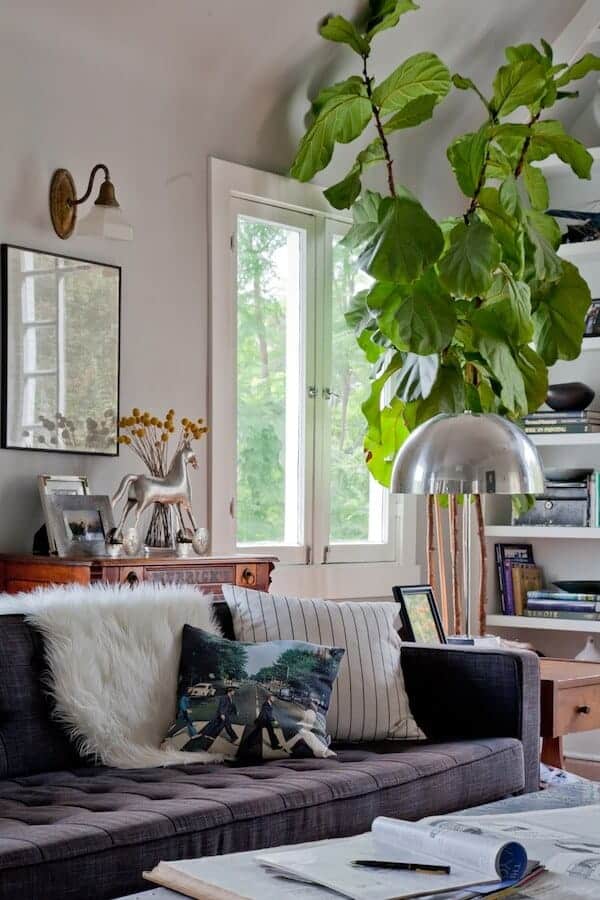 The sofa is from HD Buttercup as well and it wasn’t expensive ($1100) but as you’ll see 2 years later it has faded a lot. That’s a good lesson, folks, – if you have a really bright room, don’t get a really dark sofa.  The fabric didn’t seem cheap to me so it wasn’t that – i think ultimately dark fabrics will fade unless they are leather, full of poly or sunbrella (outdoor) fabric.  I brought in that silver dome lamp recently that i got at the flea market (and strangely it didn’t sell on One kings Lane).  The Beatles pillow is an addition that he made and i think it works – as long as there is just one (there are 3 and i always hide the other two when i go over – i’m VERY annoying like that).  The black and white pillow i made myself during the show. 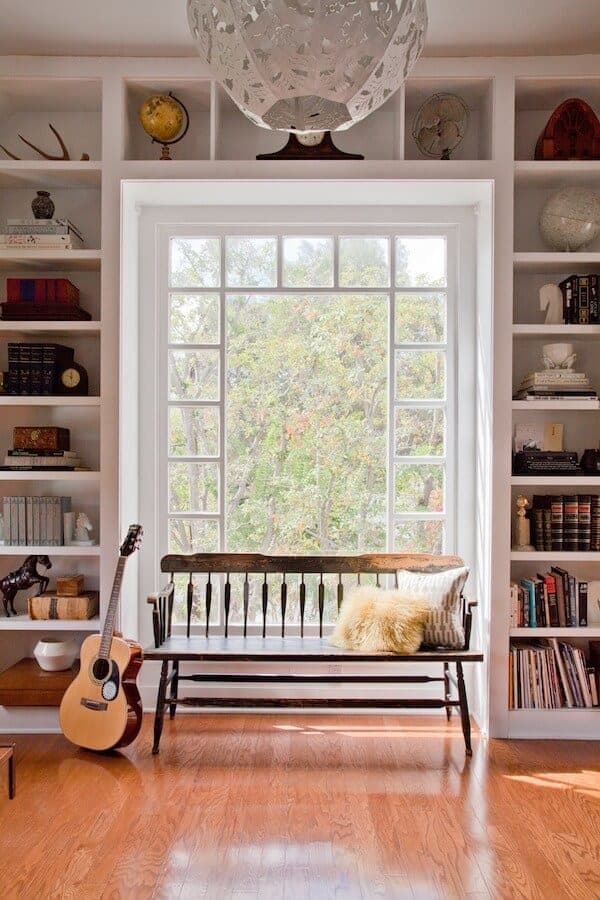 The shelves are propped with what i call ‘dude accessories.’  These tend to be globes, encyclopedias, leather objects, boxes, weird books, antlers and vintage fans.  Some of them up top are kinda ‘proppy’ but you can’t get to them because they are up so high so i needed objects that were graphic, not too busy and popped out of the shelves.   The pendant is from MIX on La Brea but it was in black so i spray painted it white.  There are two of them in the space and they are awesome, and were each $300 which is not bad considering how much impact they have. 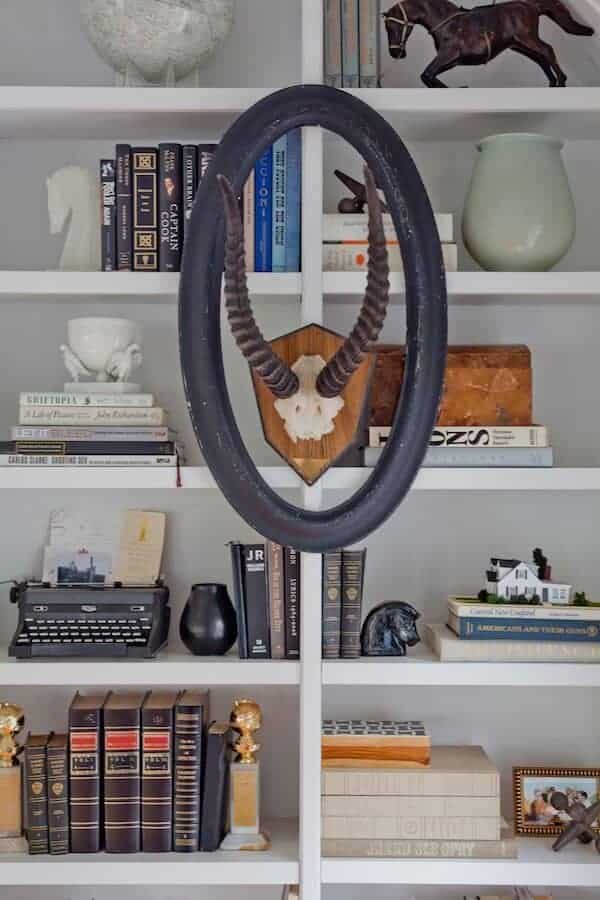 Here’s a question i get all the time, ‘How do i style my Golden Globes in my home decor?’  Ugh, i totally understand. Golden Globes are the worst.  Actually to be honest these are beautiful. I work with a lot of writers and very often the trophy awards are purple triangle things and actually hard to make look cool, but these golden globes are 1. GOLD and 2. simple and classic looking.  (He won for creating and writing Glee – he’s the shit). 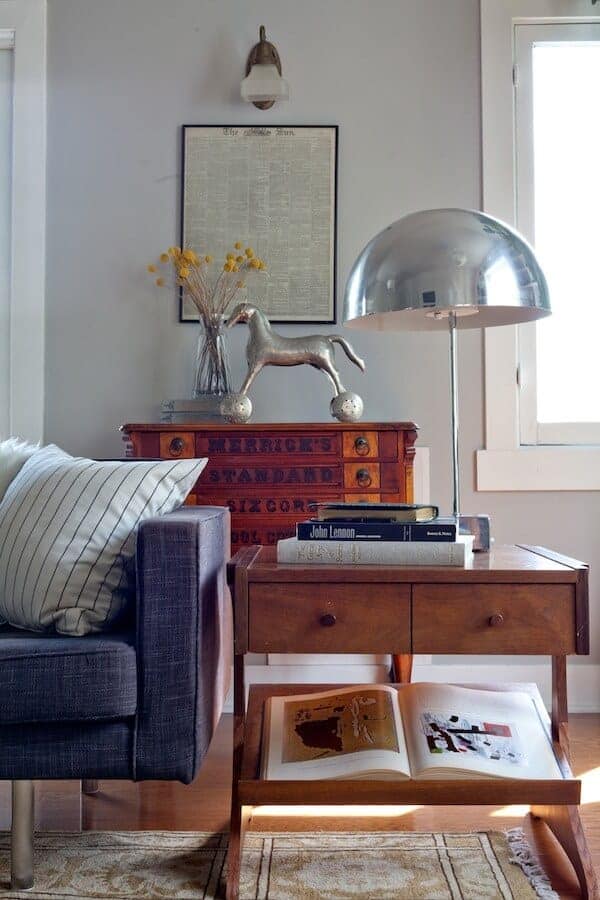 The side table is from TINI, i believe. The Rug is from Stark Carpets and was $1800, which isn’t pennies but i love it. It’s the perfect golden, ochre-y contrast to all the grays.  Plus it really pulls in the Golden Globes. 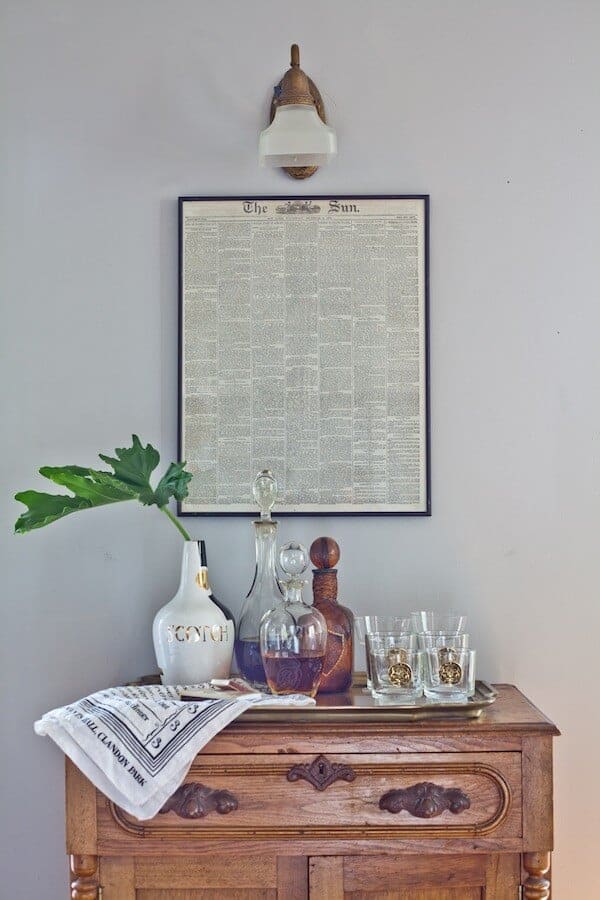 How can you entertain Steven Spielberg without a proper bar? You can’t. It’s social suicide in Hollywood. I got the table at the flea market, the vintage tea towel is from Etsy, the glasses are from an antique mall upstate New York (those are mine, though, i brought them in for the shoot, i’m obsessed with them and their little gold crests on them).  And the ‘Scotch’ Vase and leather decanter are also mine.  Above the bar is a page from the Chicago Sun Newspaper from 1887 or something and it’s TERRIBLY fun to read.  I mean, people talked about their horses, hangings and yes, guns.  Also people were very racist, its totally fascinating to read how we have changed in the last 150 years.  There used to be vintage photographs of The Who, but we moved those downstairs and replaced them with these newspapers which we got at the flea market for $80 each.

You might remember that during the show i put edison bulbs in the sconces and left them bare – all hipster like. Well that didn’t last too long.  A. i got over that trend really fast and B. they give off terrible light that pierces your eyeballs even when you aren’t looking at them. So i replaced them with these glass shades about a year ago. 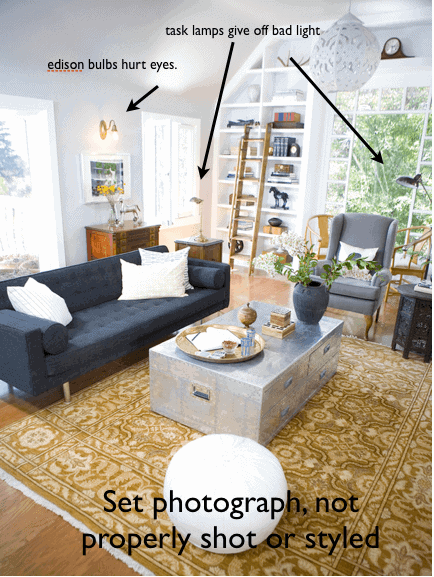 That’s how it was when i finished the show.  In general it hasn’t changed too much, but per usual after living in a space (he moved in the day that we finished) you realize your actual needs and things get shifted. Also when you are doing things for TV you kinda have to commit to something that has been approved even if you know you’d change it.

AGAIN THAT IS A SET PHOTO.  For instance those chairs in the background, i had to leave them there because i was supposed to be mixing more ‘global’ pieces in, when ultimately the bench looks wildly better there. 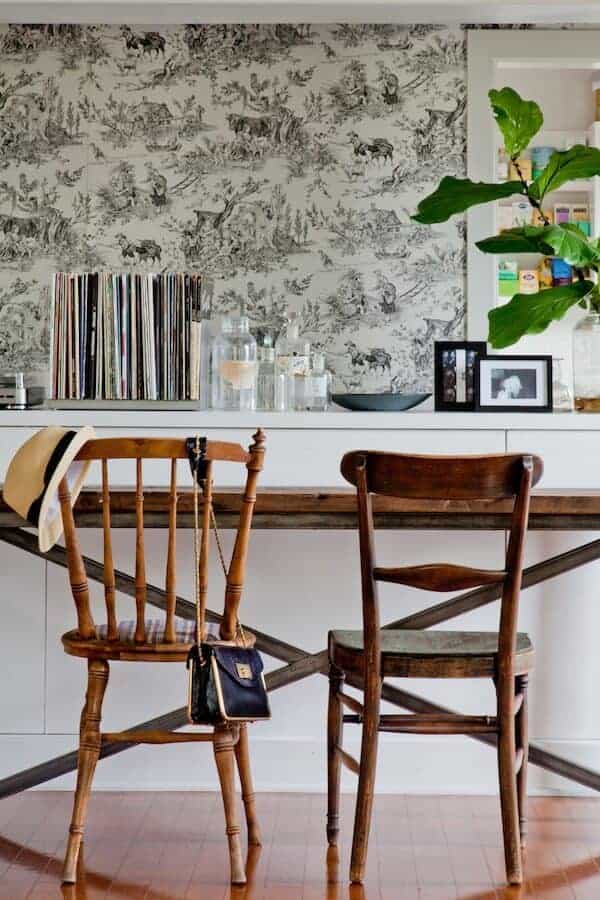 If you turn around in the room, you see the dining area with this black and white toile wallpaper going up the wall in the stairway, creating an accent wall.  It’s awesome.  The chairs are thrifted and the dining/console table is from HD Buttercup.  The pharmacy trend was still pretty big when i decorated this place so there are a bunch of bottles styled up here, and i still really like them. I’m not into the fake repro’s but these guys are real and have a lot of age to them so i’m cool with it.  No, that is not Ian’s purse.  He prefers vintage airline bags. 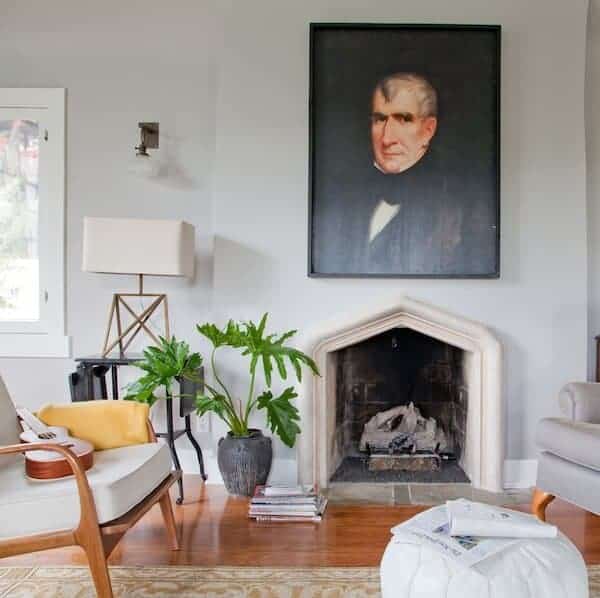 The chair is from the flea market but i had it upholstered in new belgium linen. The pouf is from Mosaic on Beverly, but you can get them HERE online. The lamp is from West Elm and i think it looks super expensive so i wish they still sold it.  When i first designed his house i had a lot of awesome task lighting, meaning lighting with metal shades (like the chrome dome lamp) but ultimatley these give off terrible ambient light since they have harsh light that only spotlights down. Lesson learned.  So a couple months later after i was at a party at his house i changed it up and made a big West Elm order.

For more of Ian Brennan’s Home: The Bedroom | The TV Room | The Vintage Desk