Name drop much? Emily? Whatever do you mean?

Here’s the 2nd to last installment of my friend Ian Brennan’s house.  Yes, co-creator of Glee and yes, i want people to google ‘Glee’ and for this post to come up, i’m kinda shameless and transparent like that. But don’t worry, I’ve also given him permission to drop my name in gross ways as well, perhaps even on an episode of Glee, in his Emmy thank you speech, or even on The Ellen Show, if need be.  I mean, whatever is best for him and the show, that’s really all i think about.  In fact that’s really why i’m doing this, to get more people to watch Glee. It’s grass roots marketing, people, but i’m pretty sure that this blog is why 11 million people watch the show, Glee. You are welcome, Ryan Murphy.

For those just tuning in, Ian is a good friend of mine and when he moved into his new bungalow a couple years ago i designed it for the pilot episode of Secrets from a Stylist. But i never took proper, well styled photos of it, which bummed me out every time i was over there.  So photographer Bethany Nauert and i went back and she shot it and I styled it all up a couple weeks ago.  Check out the Living/dining room, and a sneak into the master bedroom, plus here is the episode itself if you want some vintage SFAS.

But some rooms REALLY changed since the show.  Like the Den, for instance: 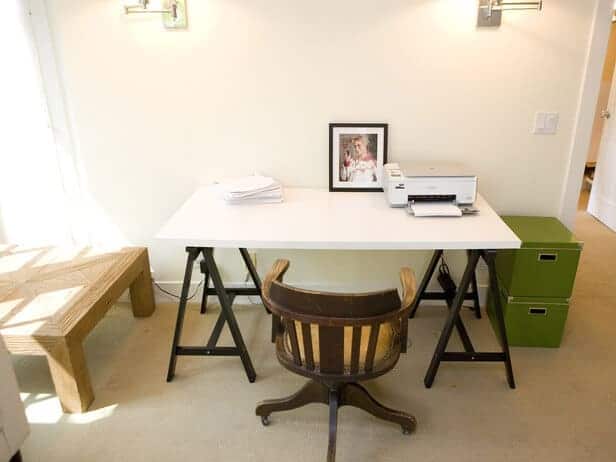 When he first moved into the house he didn’t really have anything to put in this room. So we had to stage the before look.  I think we even bought him this furniture so that there was something actually in the room to show on camera and to give the viewers a proper ‘before’ and ‘after’.  There’s a secret from a stylist for you.  This is the only picture i can find, sadly, but it gives you an idea of what the space was like before.

THEN, when i redid it on the show i turned it into this: 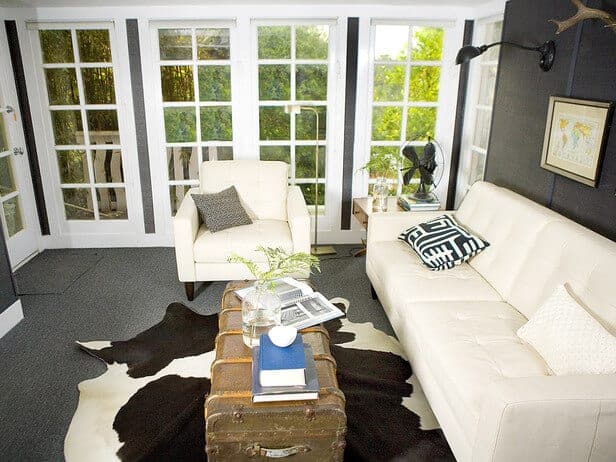 Its obviously widly better, although that photo looks so sad.  But here is some behind the scenes info – some real riveting stuff:

Ian and i really didn’t like this white furniture. It was his old furniture from his starter apartment in Los Angeles. It was faux leather and just way too ‘contemporary’ for him (and me). Plus not nearly comfortable enough for the tv room. 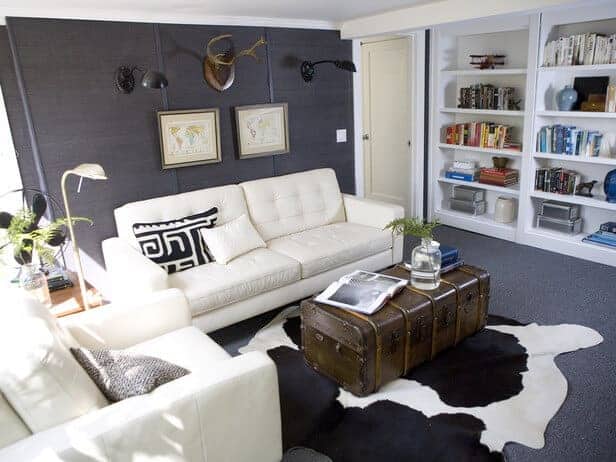 They look nice in these photos, i admit. But ultimately we wanted something better.

So before the show we went to HD Buttercup and bought a very comfortable sectional.  The plan was to use these in the first look and then to bring the sectional in for the second look. But the producers thought that these looked nice enough, and that it would look silly to the viewers to replace them and we would get criticism for being wasteful.  I think they were right.  So we left these for the final look and kept the sectional in storage til after the show.  Then we sold these on craigslist.

I like this room. Its masculine and ‘dude’.  I like the gray grasscloth a lot, and as you can see we replaced the carpet to simple gray commercial grade carpet, added a hyde, vintage trunk for a coffee table and installed goose neck lamps on the wall as sconces.

But then a couple bad things happened:

1. The grasscloth installer for the show (that we never used again) was NOT up to par and thats putting it real nicely.  The seams in grasscloth are always going to show more than in wallpaper and normally it doesn’t bother me, but it was really bad and uneven and messy.  Then he got a lot of the wallpaper paste on the front of the grasscloth so there were these huge stains all over the front of it. Awesome.  We shot around it and vowed to Ian that we would fix it afterwards with a better installer, one that knew how to YOU KNOW, install it properly. Luckily grasscloth is cheap compared to wallpaper so it wasn’t that big of a pain.  I buy my grasscloth at Designyourwalls.com.  It can be as cheap as $35 a roll (wallpaper starts at $60 – $150 a roll, to give you a comparison).

2. We replaced the grasscloth just in time for Ian’s basement to flood. The entire basement was practically underwater and had to be gutted.  MASSIVE bummer. I felt SOOO terrible for him.  This was his first year into home ownership so needless to say it sucked. Everything had to be replaced and i tried to help as much as i could.  I’ve always felt slightly responsible for his house because he bought it really quickly just so he could be on the show which obviously was great for him, but also so good for me. So i do feel slighly emotionally tied to it.

ANYWAYS, this room did feel a bit masculine and cold for him (and me) so when we had to opportunity/were forced to replace the grasscloth AGAIN i swatched new colors and we realized that a really warm dark ochre would make the room WAY more inviting. This space doesn’t get a lot of light and its sole purpose is for cuddling, so it needed to be more inviting. If the floors were wood it might have helped, but i always knew deep down that the charcoal walls and the heather gray carpet wasn’t the best idea.  But it was approved by me, him, the producers and HGTV so I stuck with it.  This is the main difference between designing for TV and designing for real life – you have to make decisions really fast and you have to stick to them even though you might change your mind. Too many people are involved, and the ball gets rolling too fast so its hard to change your mind in so many ways.

But look at her now: 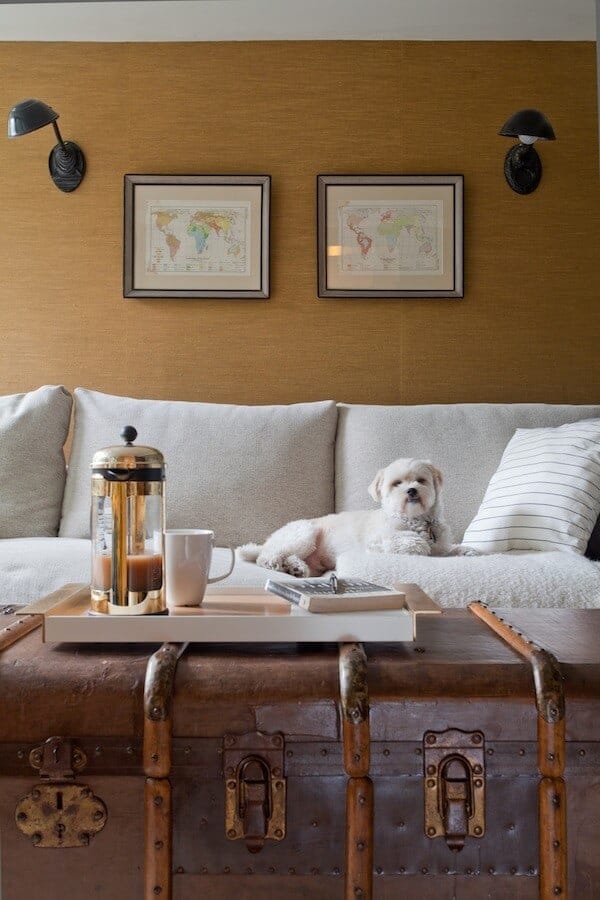 The room is now WAY more cozy and inviting. The beautiful ochre grasscloth made all the difference in the world. Plus there is a cute dog, and people love pinning cute pictures of dogs, right? 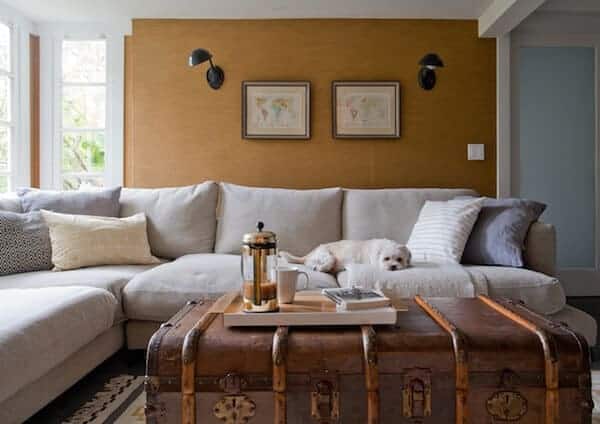 So here is one of the first lessons i learned as a designer (rather than just a stylist):

A room with too many cool tones will just feel COLD.  Gray walls, gray sofa and gray floor = masculine, but cold. 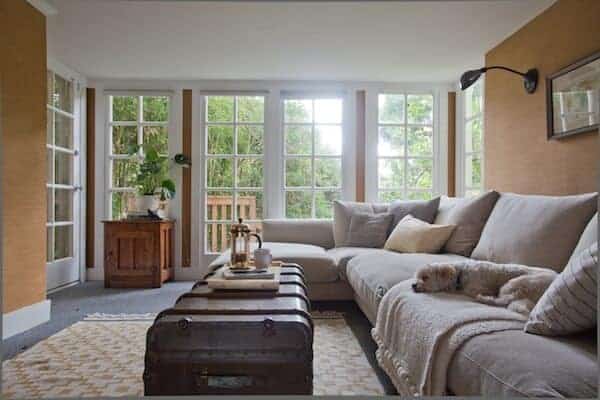 Now we have warm ochre grasscloth walls, a warm wood coffee table/trunk, an ochre and cream patterned rug (from Ikea), BUT the sofa is still a warm gray and the carpet is still gray so it feels balanced. Sometimes  a room with too many warm neutrals can look dated and kinda 90’s, so it needs to have some cooler tones.  But i love that there isn’t a lot of high contrast in this room – its tonal and quiet which makes it feel bigger, calmer and more inviting.

Again, thanks to Bethany Nauert for shooting the real AFTERS, she did an awesome job.  Again check out his living room and mini-office here.

So which do you prefer – the gray grasscloth or the ochre grasscloth?  Be honest folks and let er rip.

For more of Ian Brennan’s Home: The Bedroom | The Vintage Desk | The Living Room