Welcome to a special guest post by my dear friend Orlando Soria of Hommemaker blog and now the creative director of the L.A. Homepolish team. We don’t work together every day anymore but our addiction to each other hasn’t waned. So, every now and again we simply must collaborate even if its just a guest post by him here on the blog. Take it away, Landy.

Remember when we met each other and we were, like, not yet fully formed adults? Like I always accidentally called Brian your boyfriend because I forgot sometimes grownup people get married and you lived in a cute little apartment instead of a giant glamourhouse? Well strangely over the past few years we’ve grown from playful party animals to people who are starting to look more and more like actual grown humans. Which is scary and BORING but fun because HAY NEW GROWN UP SPACES.

Recently, I awoke abruptly from a terrifying nightmare (about a terribly styled coffee table) and realized my bedroom needed some tweaking. First of all, the slightly blue hue of the wall was was a bit colder than I wanted (it was Pale Smoke by Benjamin Moore) and it was making me depressed and annoyed. Second, because I move my art on a daily basis my walls looked like swiss cheese. Finally, I felt the space could do with a bit more structure, a bit more sophistication. So before my bedroom was like Kesha, I wanted it to be more like Taylor Swift, freshly emerging from the gym, perfectly coiffed.

My bedroom was still pretty much the way I had it with my ex and not very different from when I moved in so this was the first time I’d really tried to reconfigure everything to make it my own. Now that I’m dating someone new I thought it was definitely time for a change. As the old adage goes, NEW BOYFRIEND, NEW BEDROOM! I actually don’t think that’s an old adage. But it should be. Which means that I would have decorated my bedroom like two times because I am virgin who can’t drive. 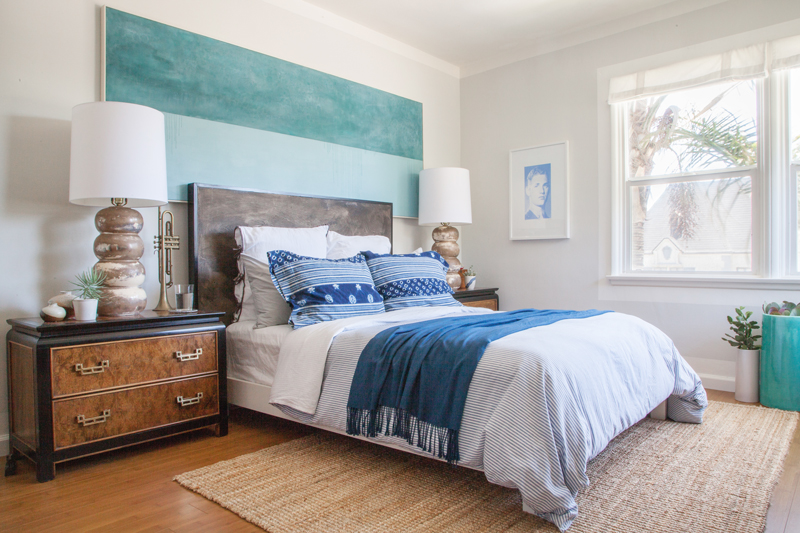 So here’s my new bedspace. I know, I know! You’re probably like “WHY DID YOU GET RID OF THAT AWESOME SEASCAPE?” And I get it, it was really fun to have it. But, I found it kind of busy for a bedroom and wanted my updated space to be much calmer and more relaxing because I tend to wiggle around in my bed instead of sleeping in it. So I was all “SHHHH PAINTING YOUR WAVES CRASHING IS KEEPING ME AWAKE IF I DON’T SLEEP I’M GOING TO DIE!” 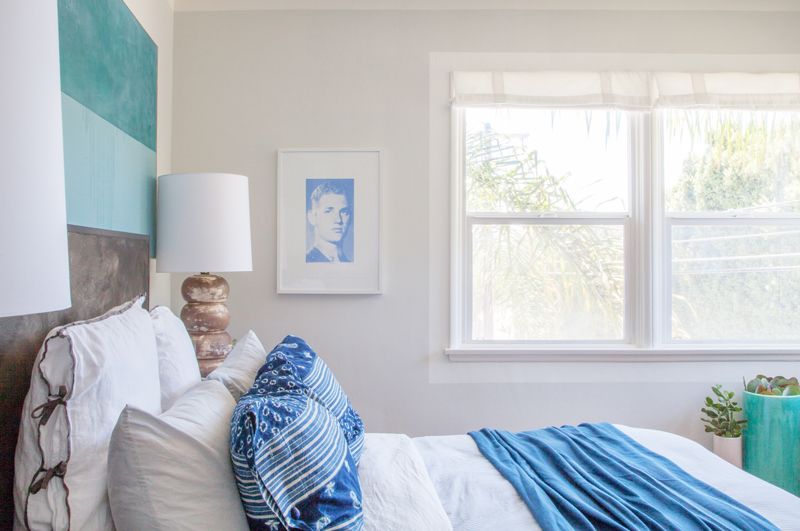 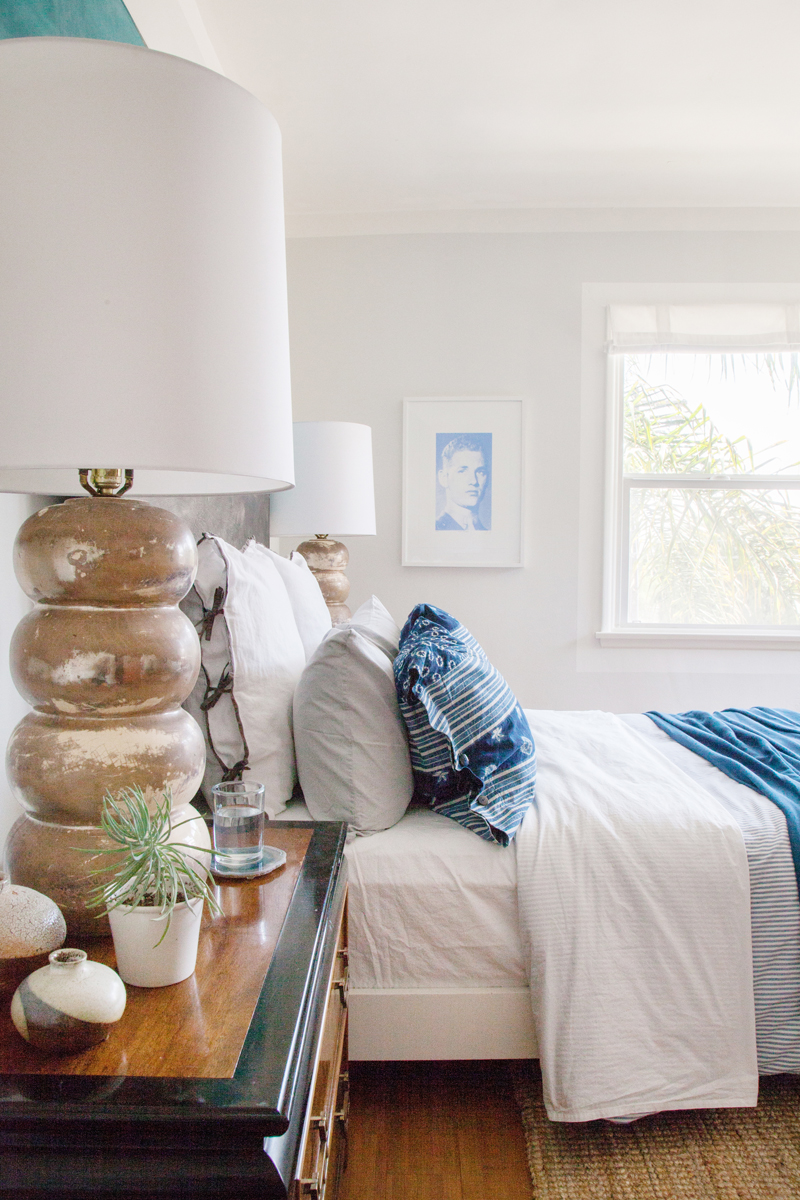 One of my favorite additions are these ticking stripe and shibori quilted pillows my mom made. They give the room a little pop of navy while also being organic and nautical, which was kind of my goal for the whole room. (For full resources see Orlando’s how to/resource guide here). 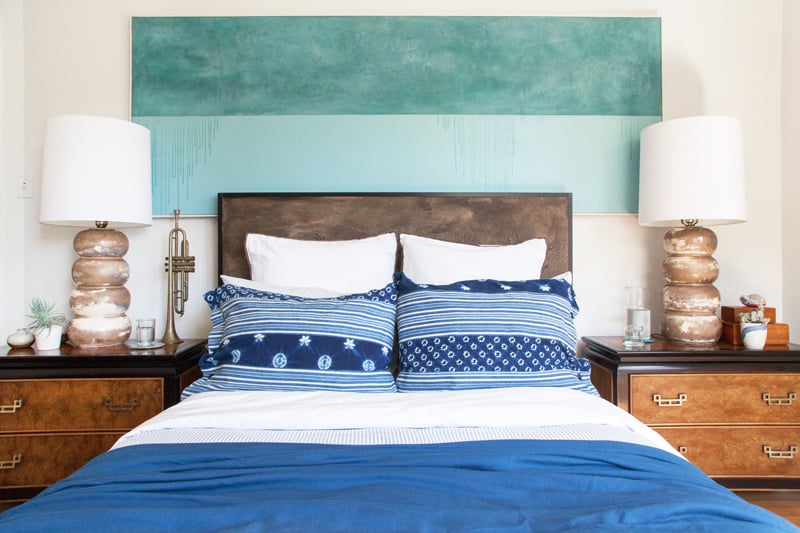 I made myself a simple organic wash painting for above the bed. I wanted it to be an abstract version of a seascape that also looked a bit like a Rothko painting. I framed it in a super cheap DIY frame (check out my how-to post) which makes it look much more finished and considered. The headboard was also a DIY project and cost practically nothing. Check the Homepolish Magazine site for that step-by-step soon… 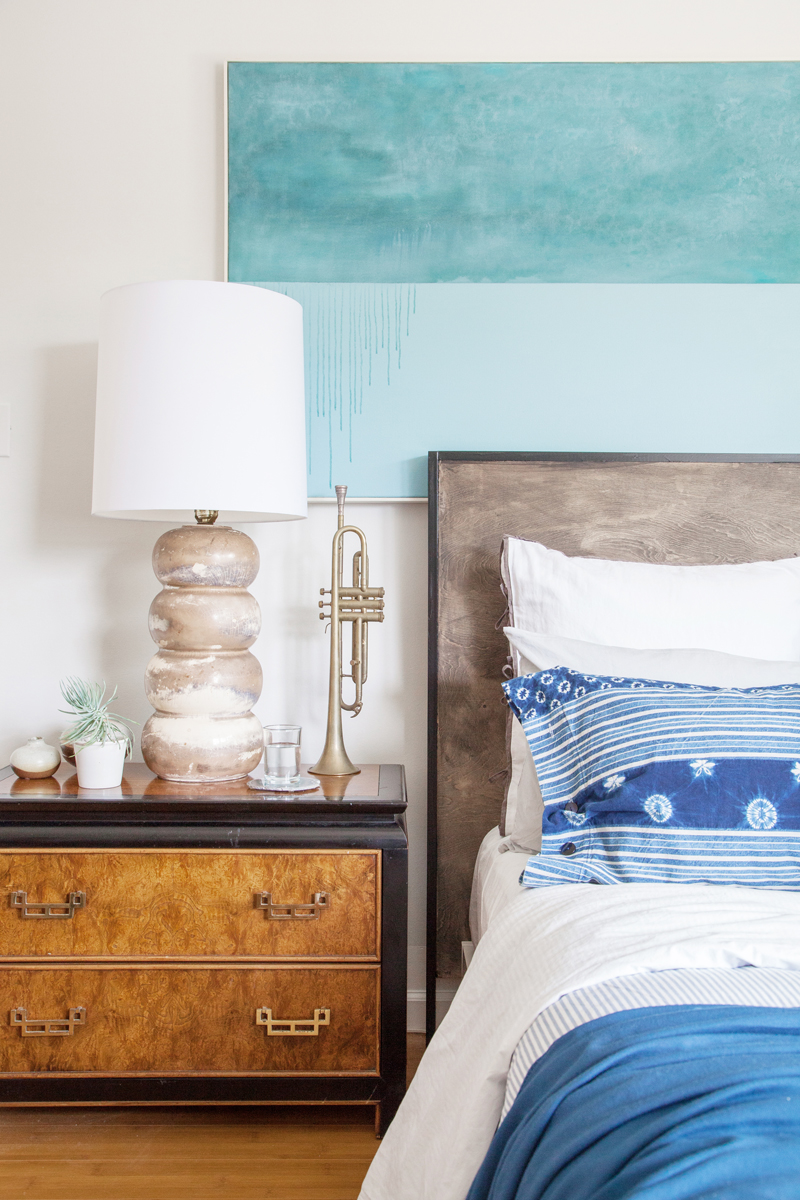 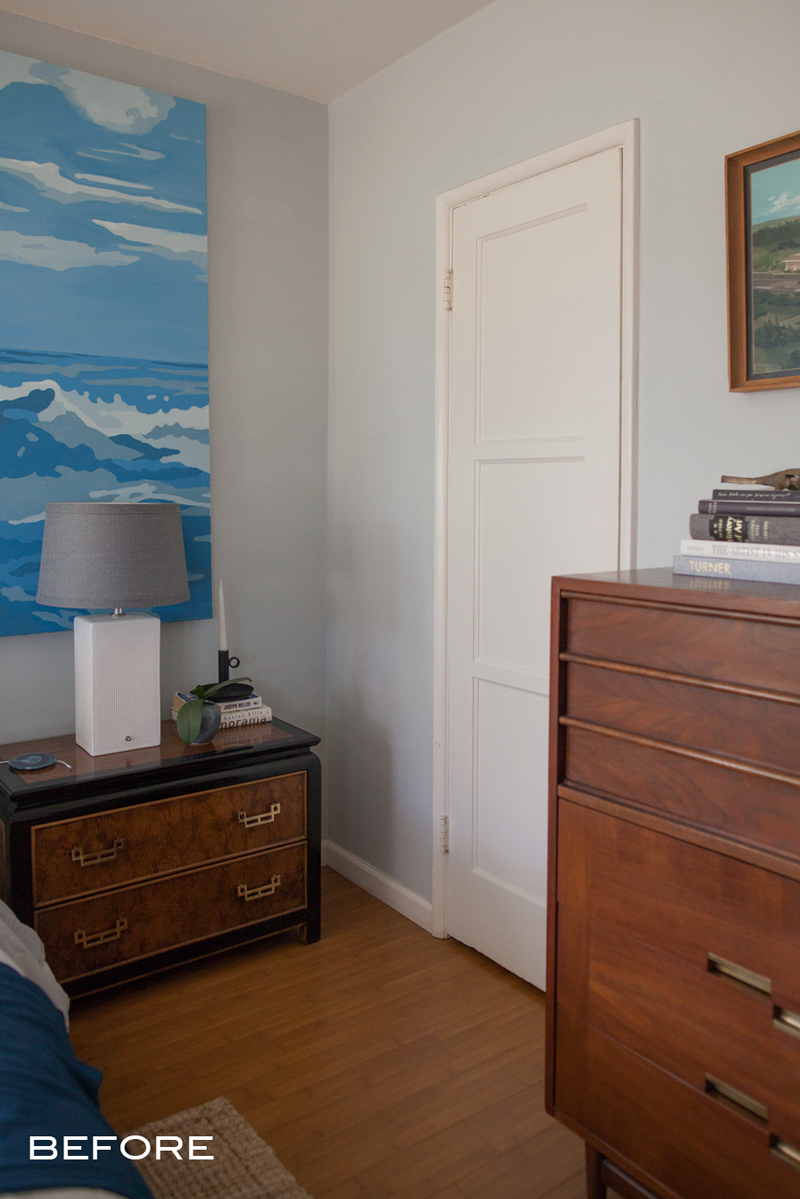 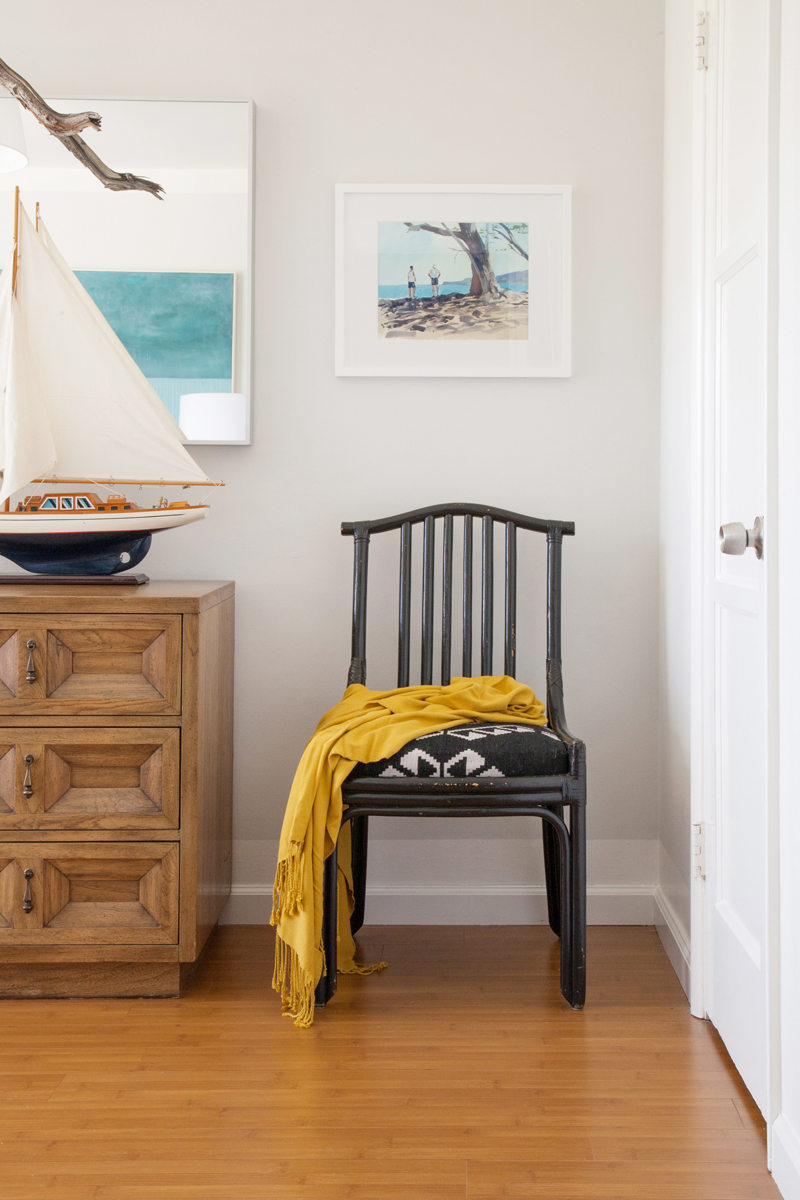 Pretty much everything in this picture came from a flea market, aside from the mirror from Ikea which is a total steal. Like it’s so cheap everyone should have one. I tell everyone. And so should you. 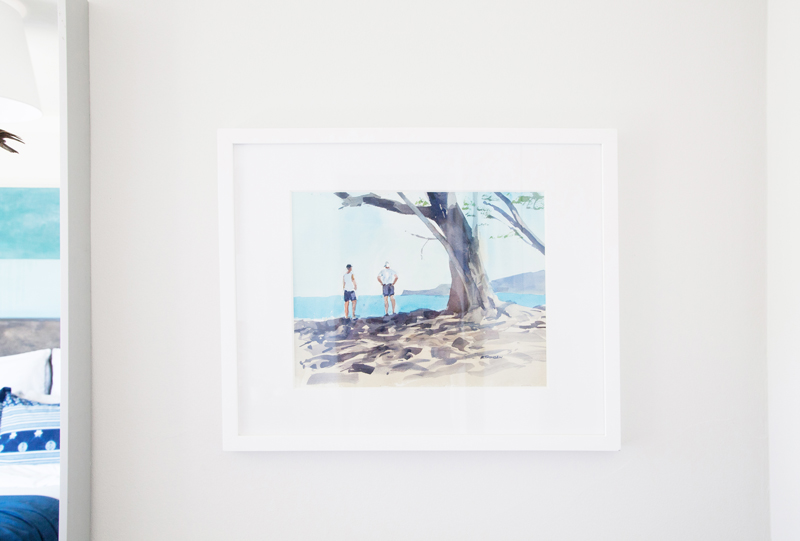 I’m obsessed with this little watercolor. I found it at Rose Bowl last time I ventured there and it makes me so happy to stare at it every day. 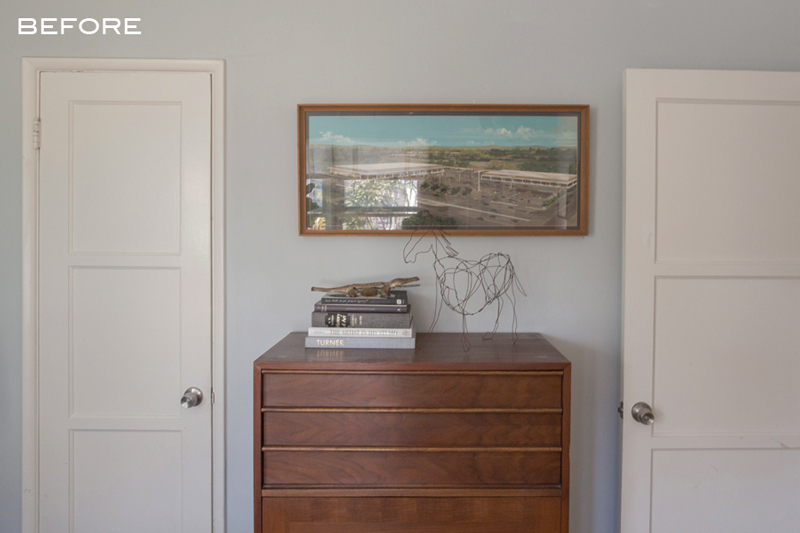 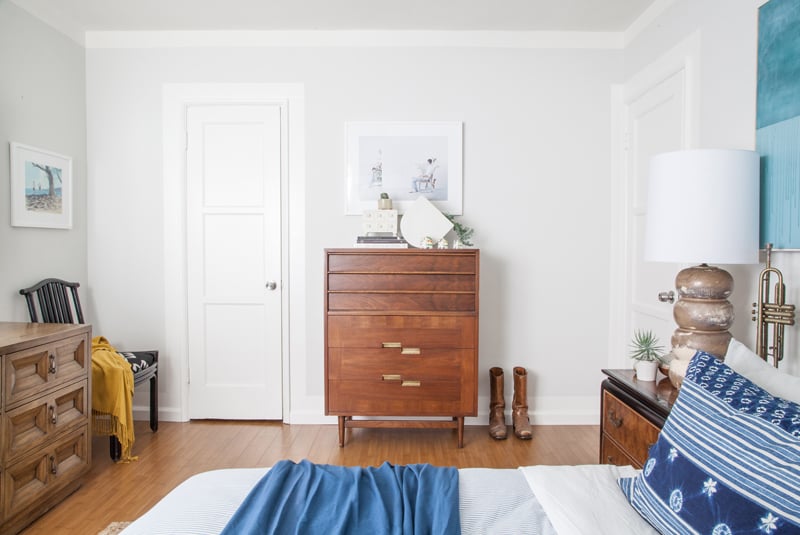 I had fun with my paint job, using oversized borders to help define the space and make it look a little more formal. Because my apartment lacks crown moulding and I didn’t feel like adding any, I added a 4″ border around the top of the wall and it thrills me in an irrational, almost scary way when I look at it every day. It’s a great solution for anyone who wants to paint their ceiling a different color than the wall but also wants to do something a little unique. 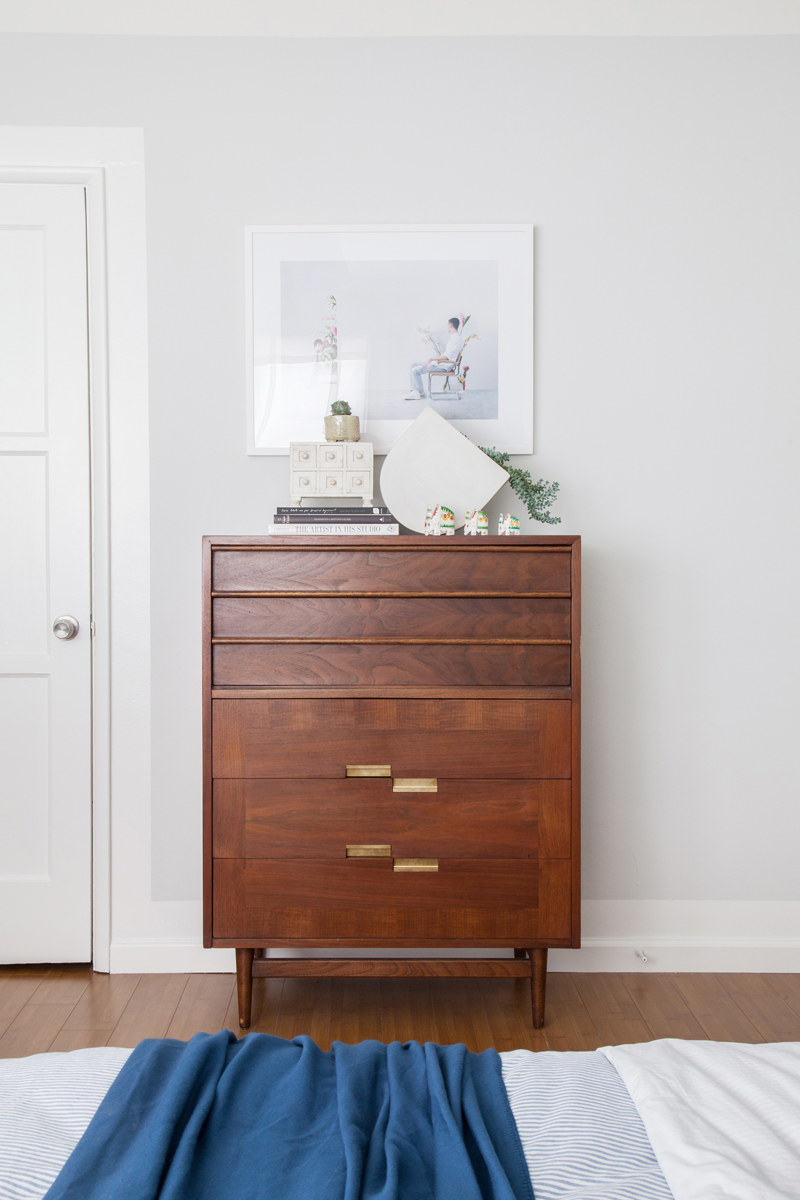 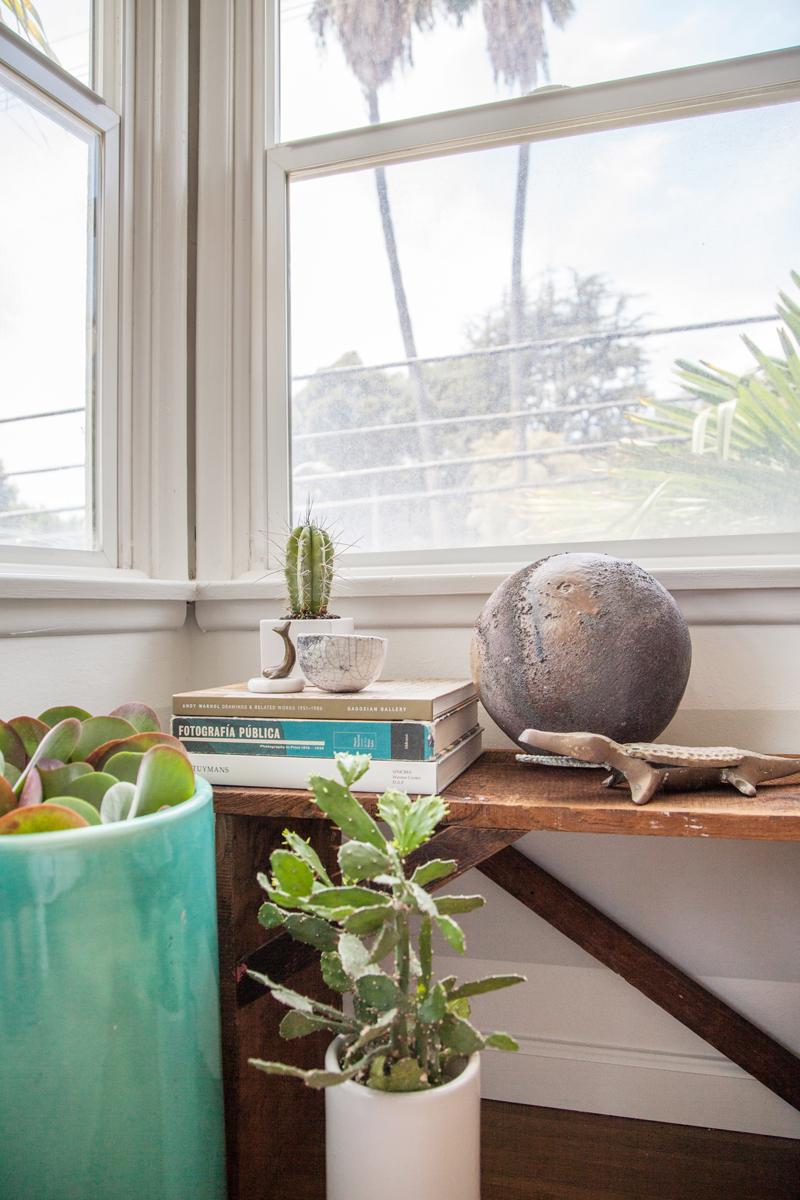 The best thing I did in the room is flip the orientation so the bed now faces the windows and looks out onto palm trees, power lines, and fancy Hollywood Hills houses. Speaking of Hollywood Hills houses, there’s an open air tour bus that passes by my apartment like 30 times a day. The guide is always screaming that Katy Perry lives across the street in a spanish revival house with a giant picture window. Sometimes, when I’m home alone watching “Katy Perry: Part of Me” on Netflix, I look out the window hoping that Katy will look down and we will lock eyes. Then, she will fall in love with me and buy me, forcing me to live in the chicken barn behind her house. 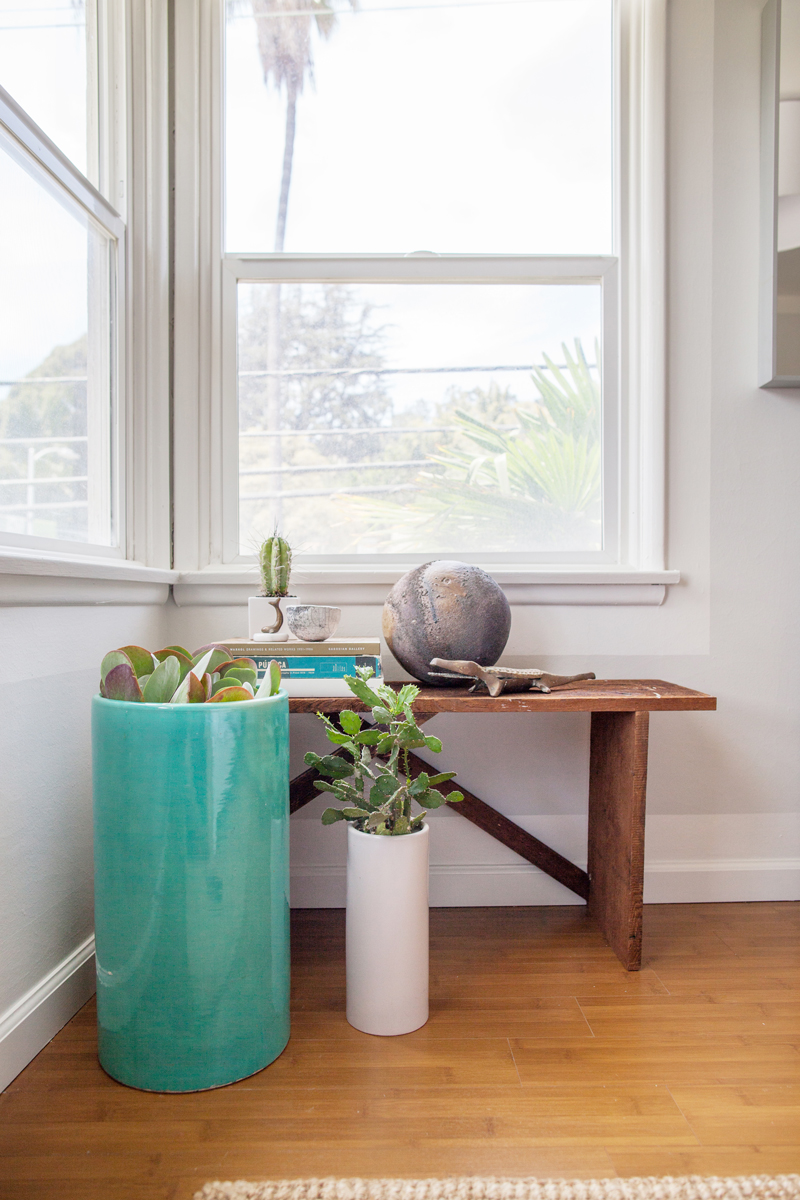 Emily gave me this bench a long time ago, I’m don’t really remember where she found it but I love how it’s rustic and outdoorsy, just like I pretend to be! 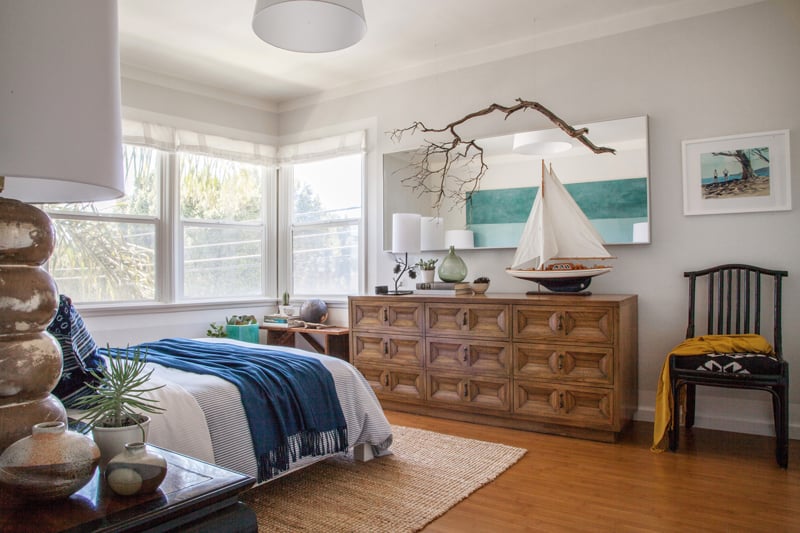 My parents moved out of our house in Yosemite recently and they had an old manzanita branch that fell off a manzanita bush that was in our back yard. It’s old and aged and I love it so I decided to hang it from the ceiling above my dresser. It’s one of the more controversial elements of my makeover but I have to say I love it. Sometimes, with design, you have to allow yourself something super weird. Even if it terrifies all your neighbors as they pass by, looking in your window, gasping loudly as they clutch their pearls. 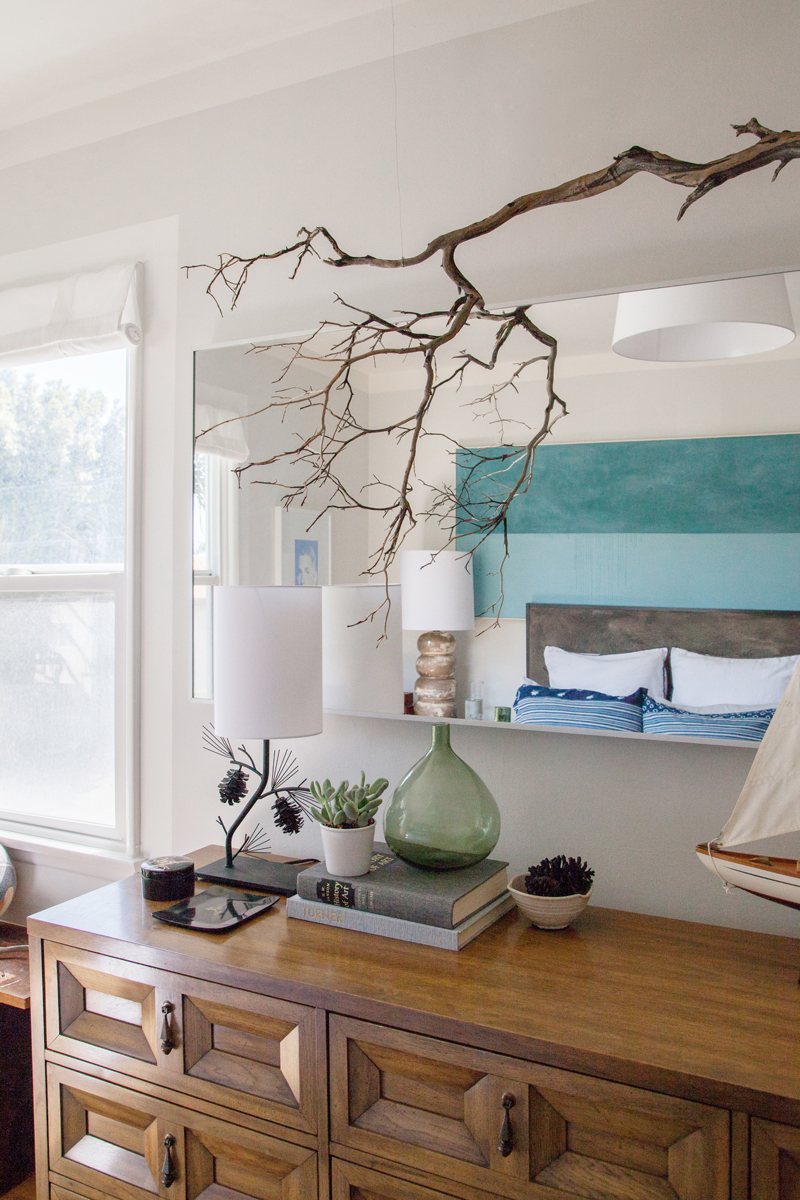 So yeah, that’s it. My whole goal with this makeover was to make it as elegant as possible without getting too fancy. I’d say I spent around $500 and now feel like my bedroom is a lot more grown up and elegant (like Emily and me). Finally!

PS: Wanna see more process shots and get the resources? Check out Orlando’s full DIY Write up on Homepolish Magazine!