Shelter posts are back! The L.A. Times ran a story on The San Fernando Rescue Mission makeover in the weekend edition (Thank you so much, Lisa Boone!) freeing us up to reveal all the rest of the rooms. First up is the playroom. Let’s play!

There are times when I think I could just exclusively design kids’ rooms. The reasons are pretty obvious – you can go nuts with color and pattern, not worry about trends, run far with a theme, and the client (although immature at times) generally is psyched about anything. Plus, you get paid in hugs, and while money is lovely, hugs from a child trumps that dough any day. This playroom was even more fun because it was for the family shelter that we designed. As you can imagine the kids of the families had probably never had a playroom before, let alone one that was fully thought out and designed. 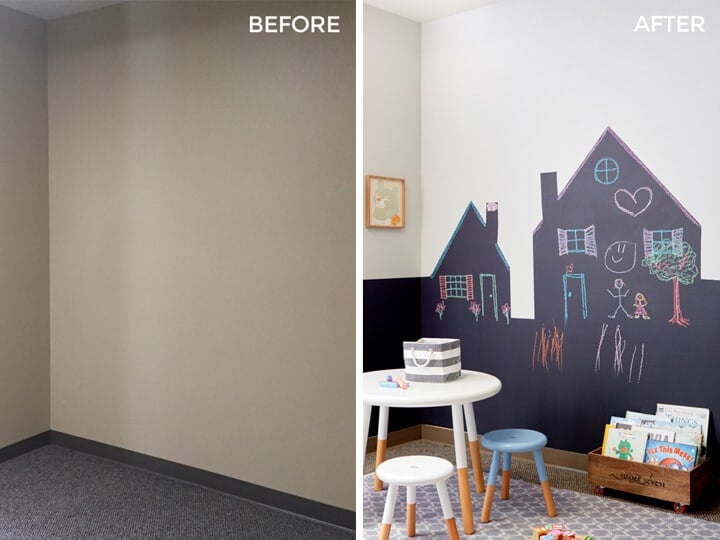 As you can see the “before” was just a blank room – not exactly a space to provoke a child’s imagination. The thing about playrooms is that you don’t need anything fancy. While some of the pieces that Serena and Lily donated weren’t cheap, you don’t need to spend a lot, I promise. You really just need to pick a color palette and then choose some low seating, a kids table, some storage, and do something weird to the walls (that you can do yourself). You don’t need to worry about a big comfortable/chic sofa that costs $3k or getting 8 matching dining chairs. 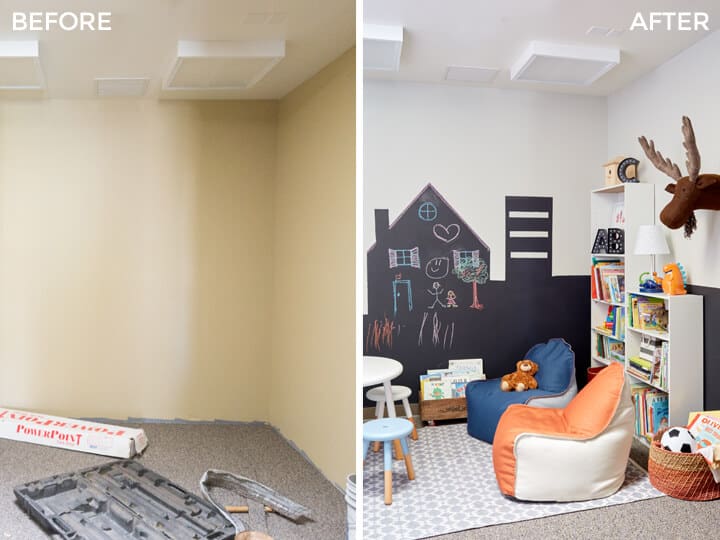 ‘Playful’ is the easiest style there is, and it always looks good. That is, until you buy all those plastic toys that inevitably break, but your child REFUSES to let you throw away. Charlie and I recently went through all his trunks/bins, and I gave him the option of ‘keep’ or ‘donate’. He was so great and generous about it. All the toys that I suggested we give away, he agreed with . . . until I packed up the box of ‘donate’ and took them outside and he gave me a look of utter confusion and horror. Clearly, ‘donate’ wasn’t in his vocabulary. I have a new rule that I’m not buying anything that needs multiple parts to work – parts that will get lost immediately. It just becomes all garbage at a certain point. Now all I want to keep are fake food (he makes DELICIOUS ketchup and banana stew), blocks, cars, balls, crayons and books – all the classics.

The point is, playrooms are cute but it’s hard to keep them looking clean, so enjoy these clean/styled photos of this playroom. Who knows how long it will remain as such. 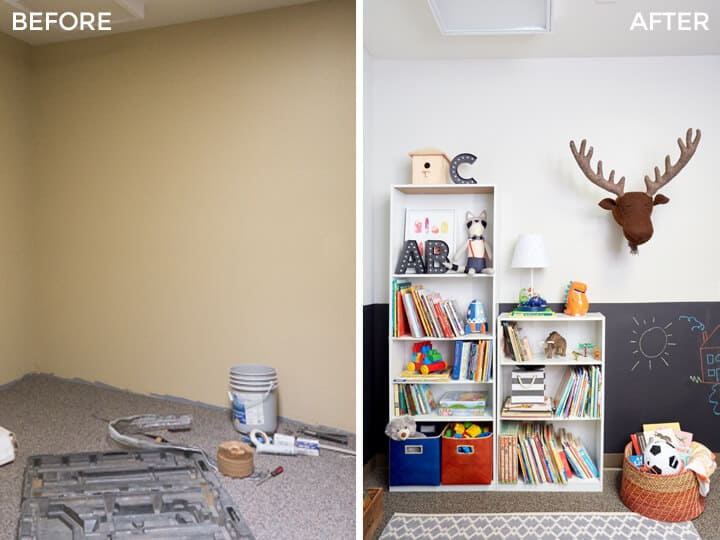 As much as I love wallpaper in a kids playroom, it can be real ‘spensive, plus you have to make sure that it’s kid friendly, meaning a kid can draw on it and nobody will notice. But this room was small and dark, so it needed something special on the walls. I did the mountainscape at Joy’s, which was so easy and cheap, so I figured I’d do a different version of it here. This time it’s a neighborhood-scape.

I taped it off (by eyeing it and just going for it) and painted it REALLY quick. There are one million imperfections, which you can see in the photos, but now you can’t really tell. After I finished painting the chalkboard paint, I was worried because, well, it was just a collection of big black houses that looked rather depressing. I wanted to do windows in the skyscraper but somehow it ended up looking like a prison. Whoops. But the second we got everything else in there and drew on the wall, it instantly looked happy and great. If I could do it over again, I would get a custom color mixed (maybe a light blue to match the stools), which is what we wanted to do but we ran out of time and thought that the black would look nice anyway. 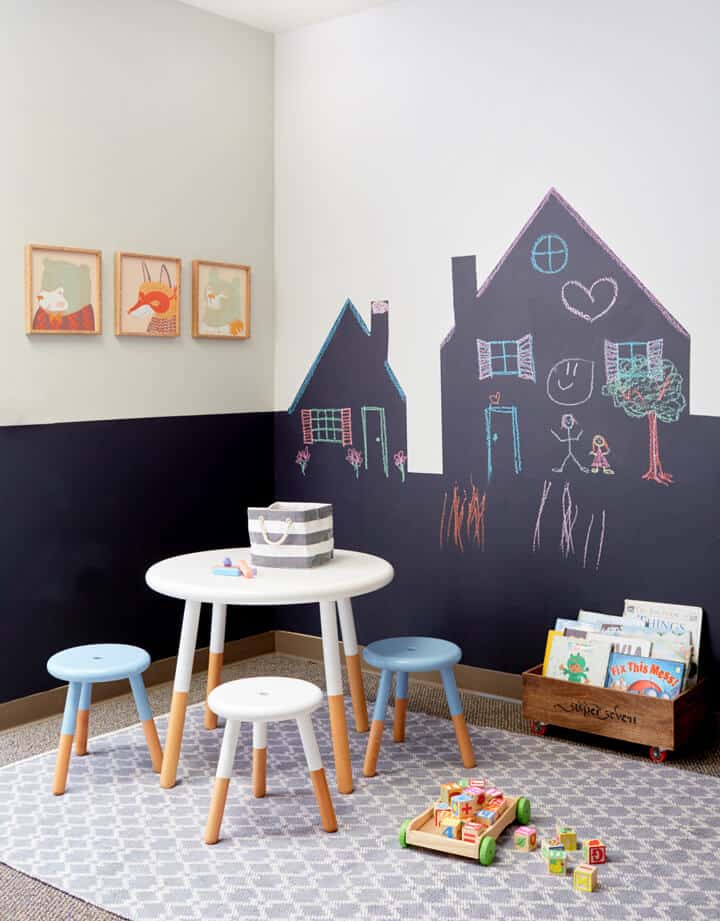 I love that kids’ table set so much. I ended up borrowing it for the Good Housekeeping shoot (and to see if maybe we should buy it), but I soon realized it was way too tall for a 1 1/2 year old. Perfect for a 4 – 8 year old, but the stools came up to Charlie’s chest. 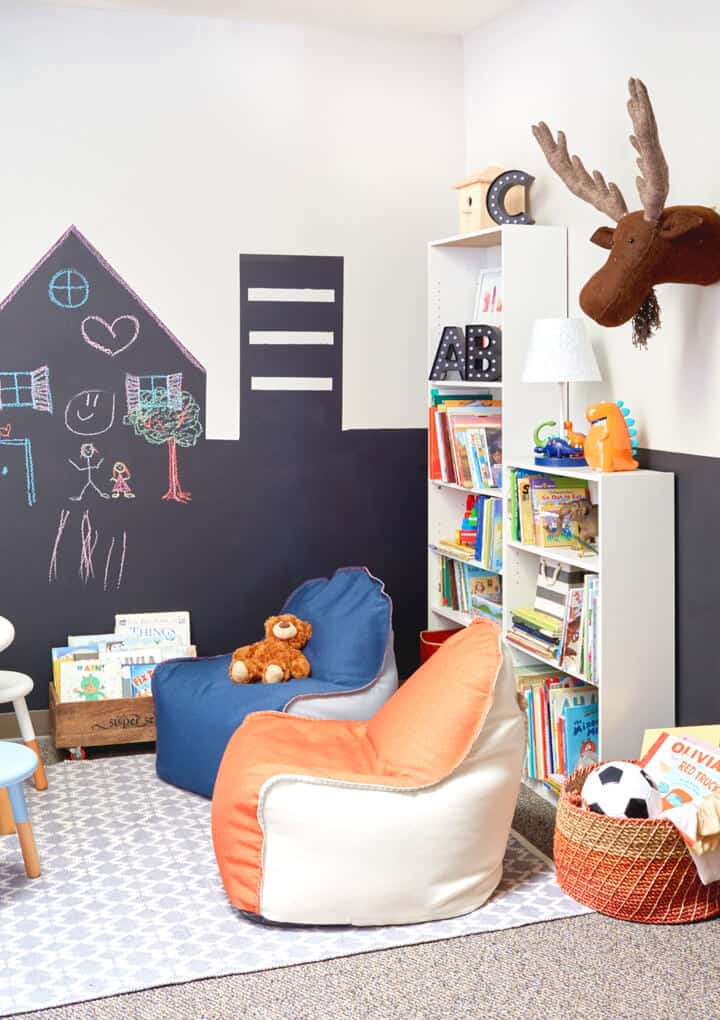 Here’s a challenge: Try to sit in those bean bag chairs and then resist from building an additional room in your house to house 10 of these in front of a big projector screen. They are crazy comfortable. The 70’s and 80’s did many things right, the most important being the bean bag chair. Then add a back to them like these have, and forget about it. Your weekend is gone. You just passed out in your bean bag chair, watching Crazy Ex Girlfriend or The Affair. Oh, to have the time to marathon a TV show again . . . 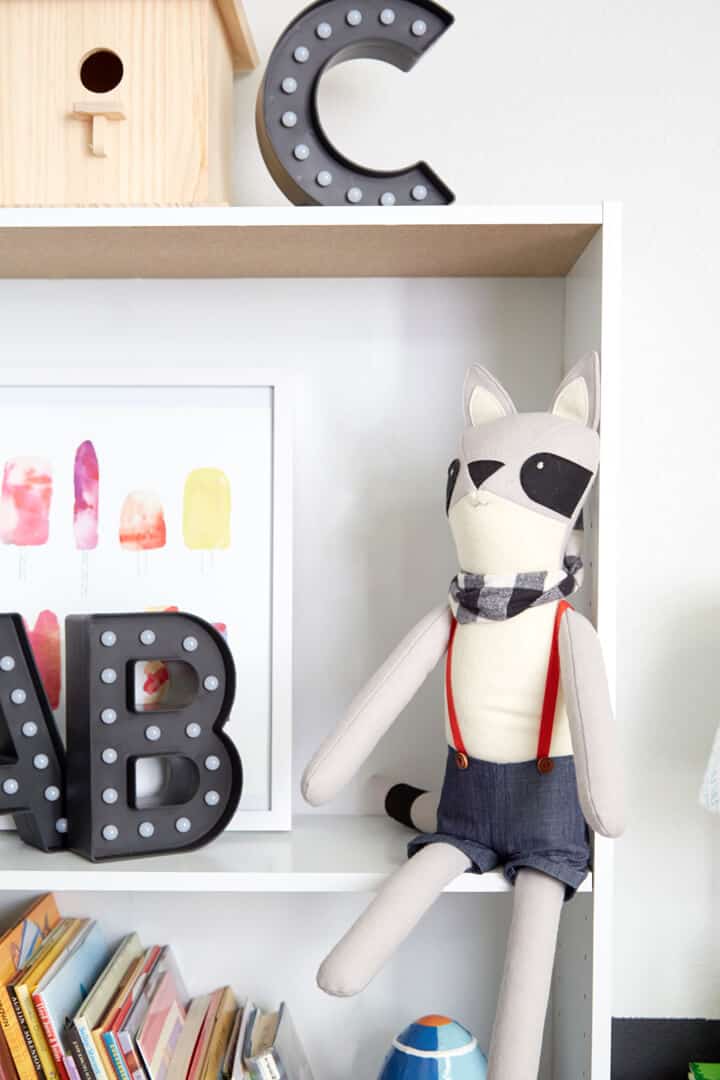 The Walnut Animal Society was generous, per usual, and donated their beautifully handmade stuffed animals. How incredibly cute are those guys and such good heirloom gifts for new babies, too. Thanks, ladies. 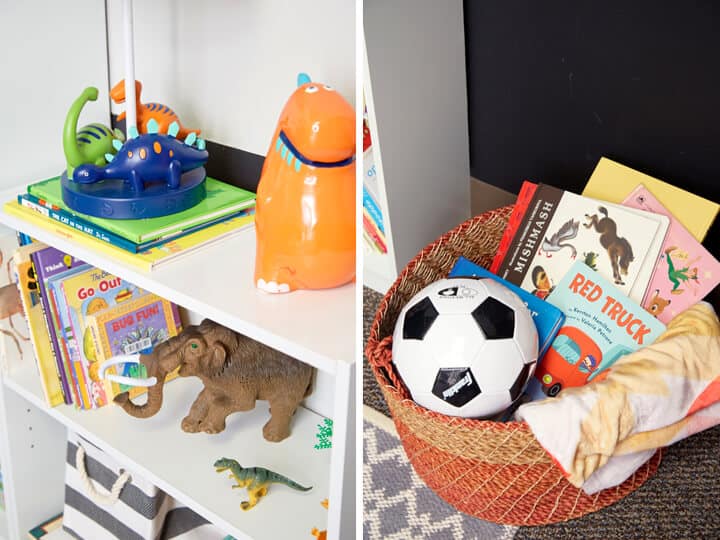 Target was also a big player in donating to this project (the rug, the bookshelves, the toys, etc). A playroom without toys is VERY sad.

But you know what is sadder? A playroom without books. Probably the most unexpected donor to this project is Strand Bookstore from New York. They reached out to us and donated so many books, and not just leftovers, like really good books for all the different rooms. They even took the time to curate them by color (for the living room). They don’t have the marketing budget of Barnes and Noble or Amazon – it’s a small company in New York that went out of their way to donate. THANK YOU, Strand. 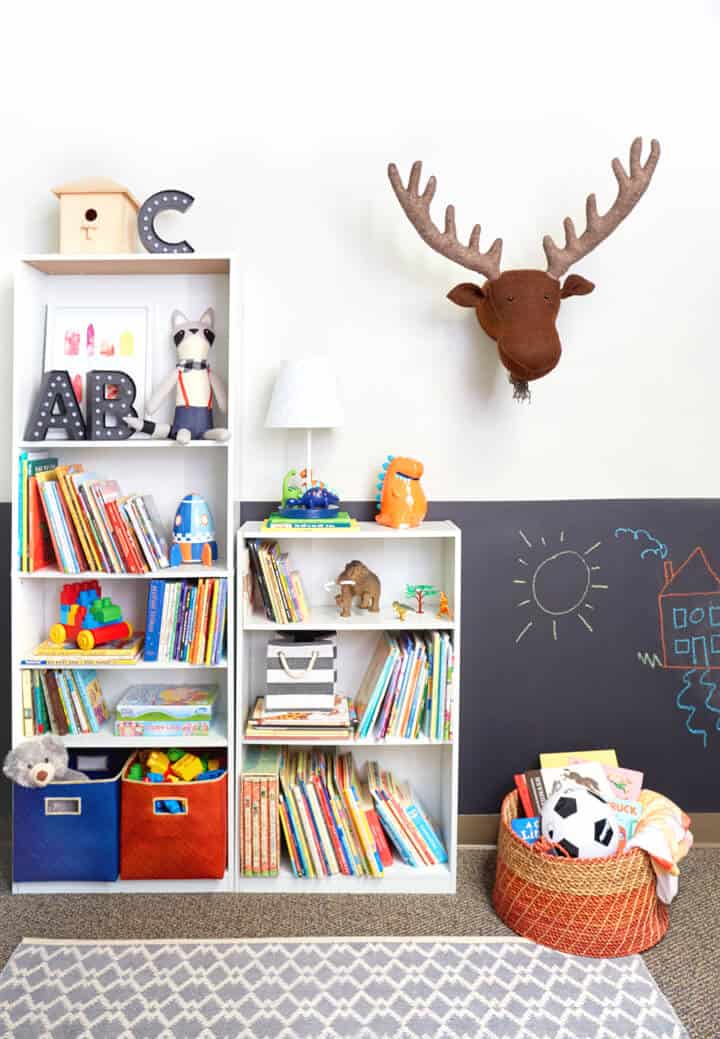 The playroom was a quick little makeover; A room that we didn’t give too much thought because so many of the others were so much more high maintenance. But it came together so fast and strangely well. Kids are an easy client, I guess. And some of them even pay in kisses. 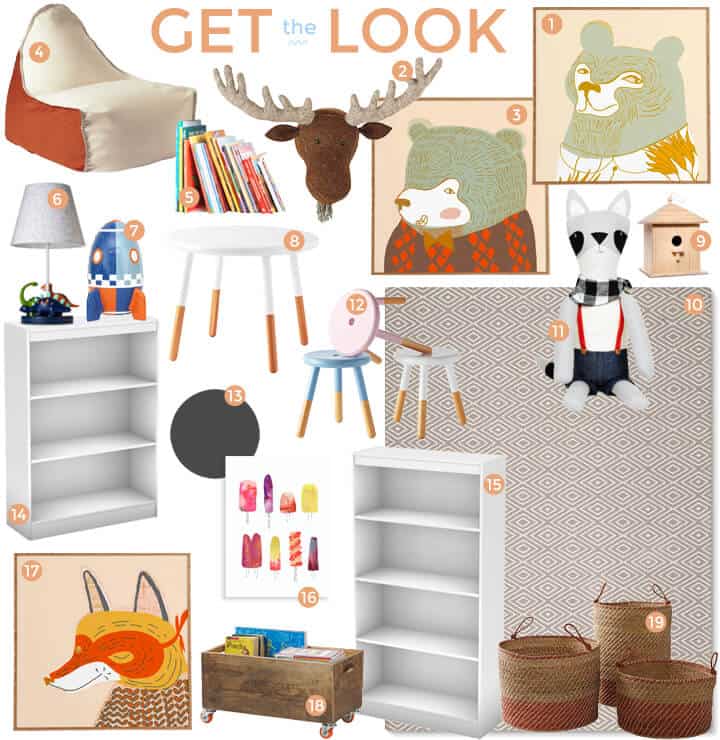 *Before photos by Jessica Isaac for EHD. After photos by David Tsay styled by Ginny MacDonald.

A quick word about David Tsay. He volunteered to shoot this shelter without pay which I was obviously PSYCHED about. It’s a tricky place to shoot with a lot of overhead commercial-style lighting, and frankly, we needed someone really good to capture the space. Thank you once again,  David, for far exceeding my expectations. This was shot when I was in Spain, and it was the first project of mine EVER that I let my team style without me. They did SUCH a great job. Thanks, everyone.

See the beginning post here, the first update post here,  a last little nudge to our indiegogo campaign here, an art roundup of our favorite work from the artists that have donated here, a big thank you to those who donated here, and the family room reveal here. And check out our feature in the Los Angeles Times!

For more Shelter Reveals: The Nursery | The Bedrooms | The Family Room

Lauren from Walnut Animal Society was my student advisor when I was in college. My mom and I loved her, and seeing that she’s moved on to way bigger and better things makes me so happy for her! I get so excited seeing her stuffed animals, and this playroom is so charming, especially the chalk landscape.

0
Lauren at Walnut
Reply to  Kaycee

bravo! your work here has been truly inspirational emily! it’s my genuine dream to one day be able to do similar work for similar clients…

Love This Play Room. My favorite was Mrs. Bear and the Fox art piece! Would love to donate bookcases or tiny chairs for the next project in LA

Entire EHD team and David you made/brought it to us in photos such a wonderful space it made me teary going through the post. The chalk outline is great, the room is so up lifting in design and style. What a delight for the families.

What a great little area! Love the chalkboard cityscape. The black is great – any lighter and I think the effect might be lost. So wonderful of the bookstore to donate an amazing collection of books. I hear you about the toy battle at home! Wood blocks (and lots of them) were absolutely favorites at our house until the kids were around 7 or 8. Along with some matchbox cars and little animal figurines, it kept them busy better than anything!

This is so wonderful! I love how cheerful it all is. As a parent of now two (almost exactly the ages of Charlie and Elliott, in fact) I’d like to offer a PSA – you may have already done this in some entirely invisible way, but please make sure those bookshelves are wall-anchored (it would look nice, and be sturdier, if you bolted them together as well)! I cannot tell you how many really awful accidents we’ve avoided by wall-anchoring all our large furniture pieces. My curious two-year-old would be a pancake without it.

What a cute playroom!

So happy to contribute to such a wonderful project. Looks so good as always, and I love that cityscape! xo

That news article about the shelter made me tear up. What a beautiful project.

I love your voice, I love what you have to say on your blog.I am amazed at what you accomplish. I hate to complain but Is there anyway you can decrease the size of the blog “header” it is so distracting to read, it takes up too much of the page and the post itself is cut off.

It looks awesome! I can’t wait to see the other rooms!

Emily, are these bean bag chairs the mini or full size version? I love them for our playroom!

ooh my god very good.
thanks