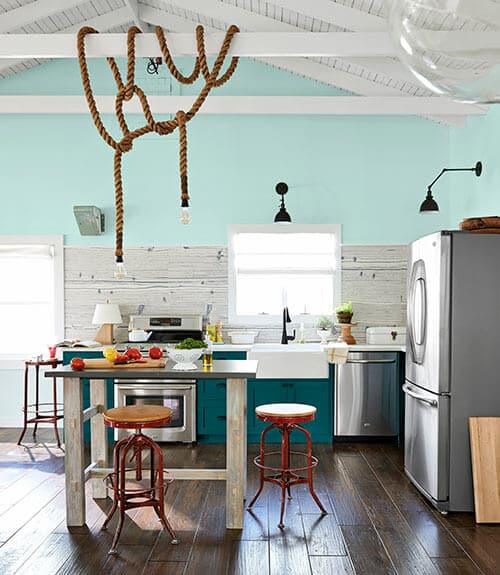 'House of the Year' Kitchen makeover

I would cook so hard in this kitchen. My life would be like one of those lifestyle mafia members who is constantly Instagramming the most beautiful rainbow kale and turnips. If only I had this kitchen, I too could Instagram those slightly undesirable but beautiful root vegetables.

If you are just catching up, I’m documenting the makeover of a house I did with Country Living Magazine. It’s called their “House of the Year, ” which makes it sound like it won some sort of award for being the best house of the year, but it’s actually a house that CL does every year. It showcases some design elements that they are excited about in country design. Regardless, it sounds very important and that’s really all that matters. Check out the whole concept and the bedroom makeover that I already posted about.

Originally the kitchen had walls and was separated from the rest of the house. One of the first things the crew did was take down the walls so it was an open concept, which isn’t as difficult as you think. Remember that walls are rarely structural. Usually columns are that are at the beginning and end of walls are often structural, but walls themselves are normally just studs, drywall, and paint, and can be kinda easily taken out. So that’s what we did.

And here you go:

Oh she is a happy happy kitchen now, isn’t she? Again the walls were painted “Spring Mint” by Benjamin Moore, which is just so pretty and joyful without being annoying or “baby” at all.  A new favorite, for sure. Jami found this tile from StoneSource that I think is a pretty awesome modern take on faux bois. I wouldn’t like it if it were in brown (but when’s the last time I liked anything in brown except for my leather shoes?) because it would be trying to look like wood, but in this gray (and the other blues it comes in) it’s pretty great.

Semi-handmade, an AWESOME company, made the cabinet door and drawer fronts and used Ikea frames. They specialize in basically taking the structure of the Ikea cabinets and customizing the fronts so they look, well, dope. They are painted Benjamin Moore “Oasis Blue” (the same come in the bedroom).

That rope pendant situation (that you can kinda arrange however you want) came from Atelier 688, and I love how it screams nautical but it in a total badass way.

We decided not to do upper cabinets because we wanted to keep it feeling light and airy, and frankly she just didn’t need the storage. You know how I feel about open shelving (I want to lick it) so this makes me happy.

We chose white Caesarstone for the tops,  which is a pretty simple, modern choice. (I prefer the Caesarstone that has NO flecks in it, by the way.) The island is from Cost Plus (a sponsor) but the tone of the wood was wrong with the flooring so we whitewashed it, which basically consisted of watered down white paint thrown on with a rag, rubbed in, with multiple coats ’til we were happy. I was pretty sceptical about doing it at all, but once they finished doing it (I believe a design intern took that challenge on, on the back porch) I liked it much better. We accented with black to give it a bit of an edge and tie all the black notes throughout the space, like the sconces, draw pulls and faucet.