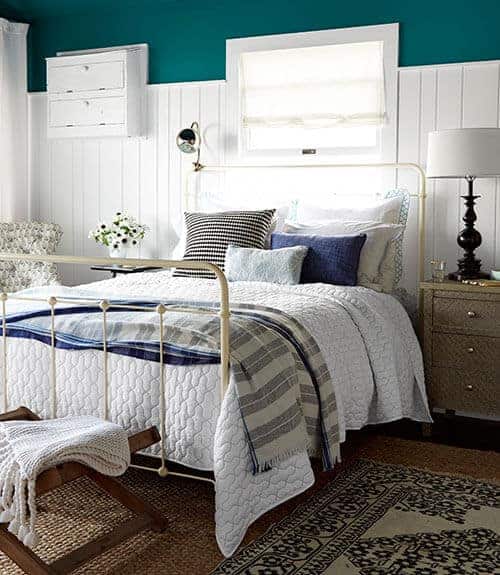 'House of the Year' Bedroom makeover

This bedroom had quite the makeover, folks. It was totally destroyed by Hurricane Sandy to where the drywall had to be removed, the flooring redone, in addition to (obviously) a redecorating job.

The before is, well, totally in pieces. Also there is a toilet in there that shouldn’t be.

And here’s the after:

Oh hey, happy bedroom. The first thing we did was add beadboard to give it some warmth and architectural interest, plus this is Country Living Magazine, so we wanted to bring in an element to help it feel more traditional. The ceilings are high so instead of doing the beadboard chair rail height we decided to take it up to picture rail height to help the room feel taller. We knew we wanted to use this dark paint color but it was so dark that we had to make sure it was used sparingly and that it wouldn’t make the room look top heavy. By using the chair rail up to about six feet we only had to paint around four feet and it added drama without adding too much energy since it was up so high. I hadn’t done that before but will again, for sure. It was a total success.

That box on the left was a custom made box to hide the wall unit air conditioner. You just open the panels when it’s on. It’s wildly better than seeing the actual unit, which is painful to my little ojos.

We mixed a roman shade and a curtain, which I do more often that I realize. People feel like you can’t but you can, especially if the windows are really different and the fabric is the same.

We added a storage space above the bathroom door (it’s a pocket door) and then naturally, it needed a pretty old ladder to get to said door.

But most importantly, and to celebrate Shark Week, there is now an awesome plastic (yet strangely heavy) shark hanging above the door that adds soooo much quirk.

Instead of doing two nightstands, we mixed a dresser on one side and a tall table/chair on the other to  help it feel more eclectic and casual. And by using a large sisal rug and then layering on vintage Persian rug (from ABC Carpet and Home), we got the boho vibe across and saved some dough since that black and white rug acts more like a throw rug and can be small.

All in all, a happy bedroom, friends. What do you think?