This job was a total dream job. Rachna and Dave were young, cool, stylish, had great taste, good imagination, and were flexible with my crazy schedule (aka, patient as hell). Plus, they had very inappropriate senses of humor and a very cute child, which is a prerequisite. I think from beginning to end it took a year, but that included a ton of travel on my part so it was slow to finish … but totally fun every single second. I’m not kidding. 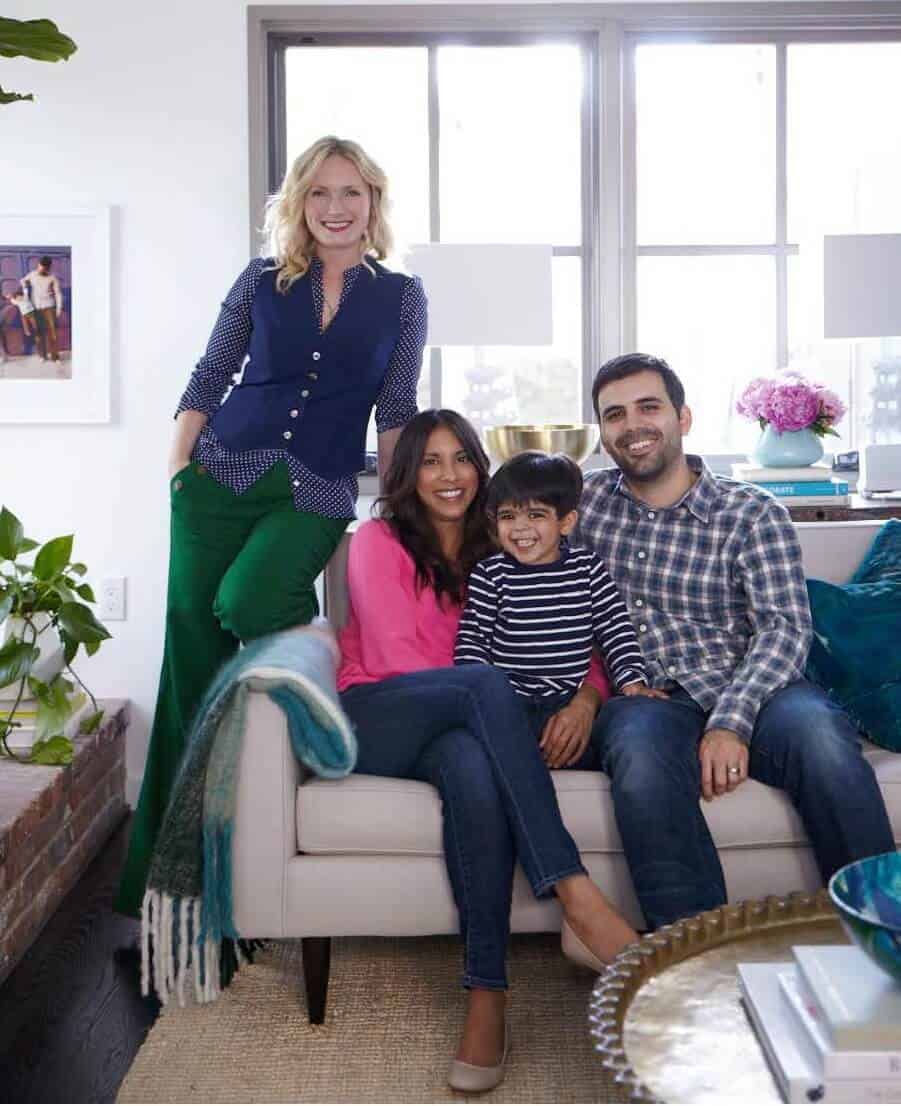 I mean, look at them. I only have attractive clients. Let’s get to some before and afters, shall we?

The living room … BEFORE: 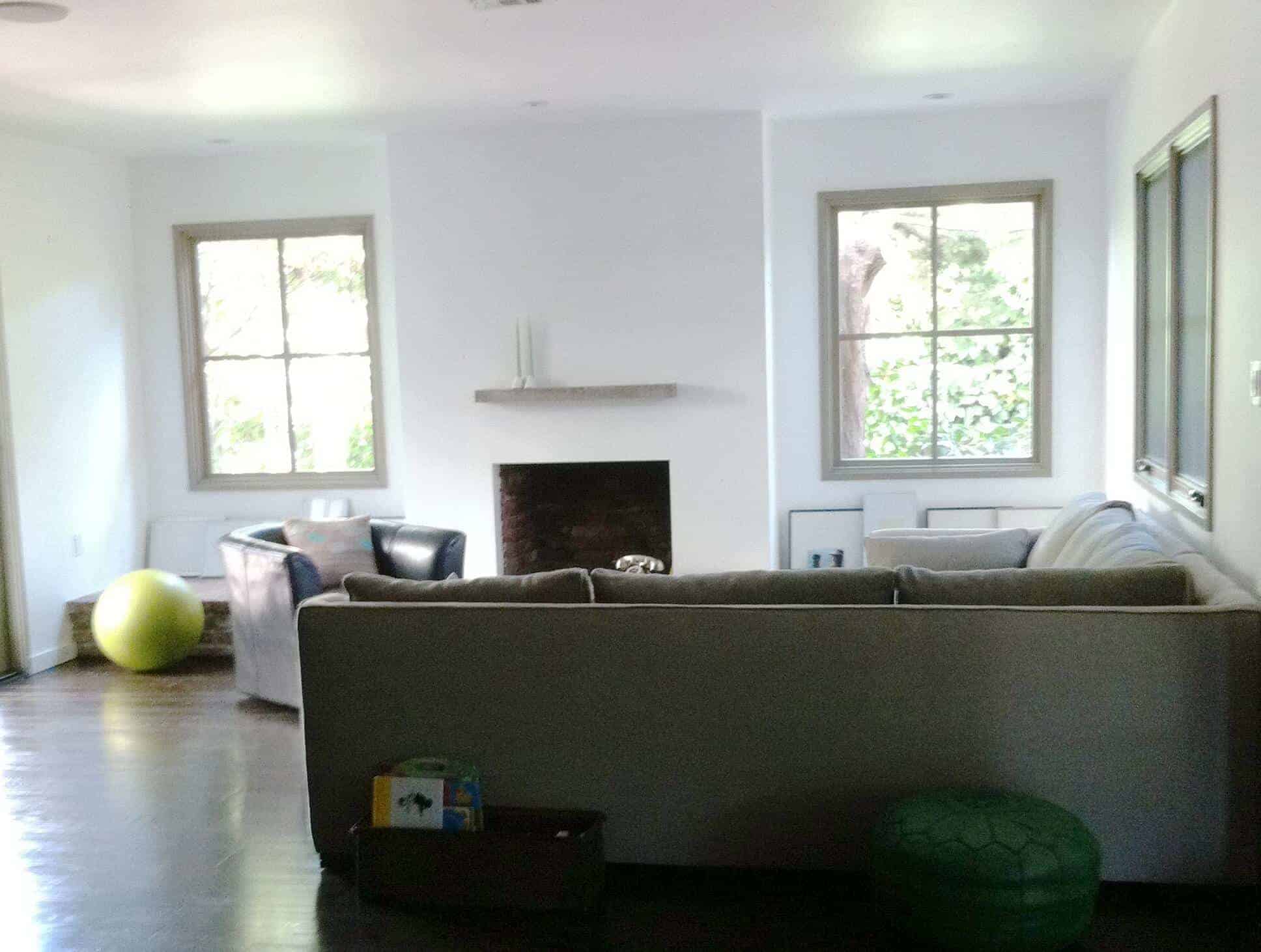 Hopefully Rachna doesn’t kill me for posting that. They had spent six months with an incredible architect, Eric Olsen, renovating this house, and it looks beautiful. It’s part of the reason we took the job — the budget wasn’t huge, but we knew that we would get amazing portfolio pics out of it (you’ll see what I mean later).

The sectional was super comfortable, but it wasn’t actually their TV room/lounging area, so it really cut off the flow of the whole main floor without being that functional. Eli’s play room is where the camera is therefore no one could sit there and watch him at the same time. So we sold the sectional (from Cisco home, which was awesome) to another client of ours (which was a friend of theirs, strangely) and bought this sofa from Room and Board instead.

AHHHH. Indeed. Bright, airy, vintage, kid-friendly. I love it. Here’s what we did: Instead of a sectional, we did the old “sofa facing almost matching chairs” trick (flea market chairs + upholstery = $600 for both) and stuck a very kid-friendly (brass doesn’t damage, round is safe) Moroccan coffee table in between. They already had that console in another room but we stuck it behind the sofa with some matching lamps on it and engaged that space, which would have been left empty and totally awkward. (Yes, think about floating your sofa and putting a sofa table behind it; it’s a fabulous underrated trick).

In case you are asking, “Why are all the props different in this photo?, ” the answer is that I had it shot (by Bethany Nauert) when I finished the house (eight months ago) to pitch it to HGTV mag. Then HGTV normally has their own photographers (like Victoria Pearson) who come in to shoot it for the magazine. In that three months we shifted some things around styled it differently for each photo. But I figured just having this perspective would help you understand the space.

The pouf was theirs already (always kid friendly, Garnet Hill sells that color) and the drum table was bought at a vintage store. The only two things we brought in for the shoot, but weren’t left were the West elm yellow lamp (because it was low and breakable, so instead they put it in their guest room), and the painting on the mantel (it’s not his style so much so they are currently still in search of that piece — and meanwhile it’s on my mantel).

Next up is Eli’s playroom, otherwise known as the coolest playroom on the West coast.

But here it is BEFORE: 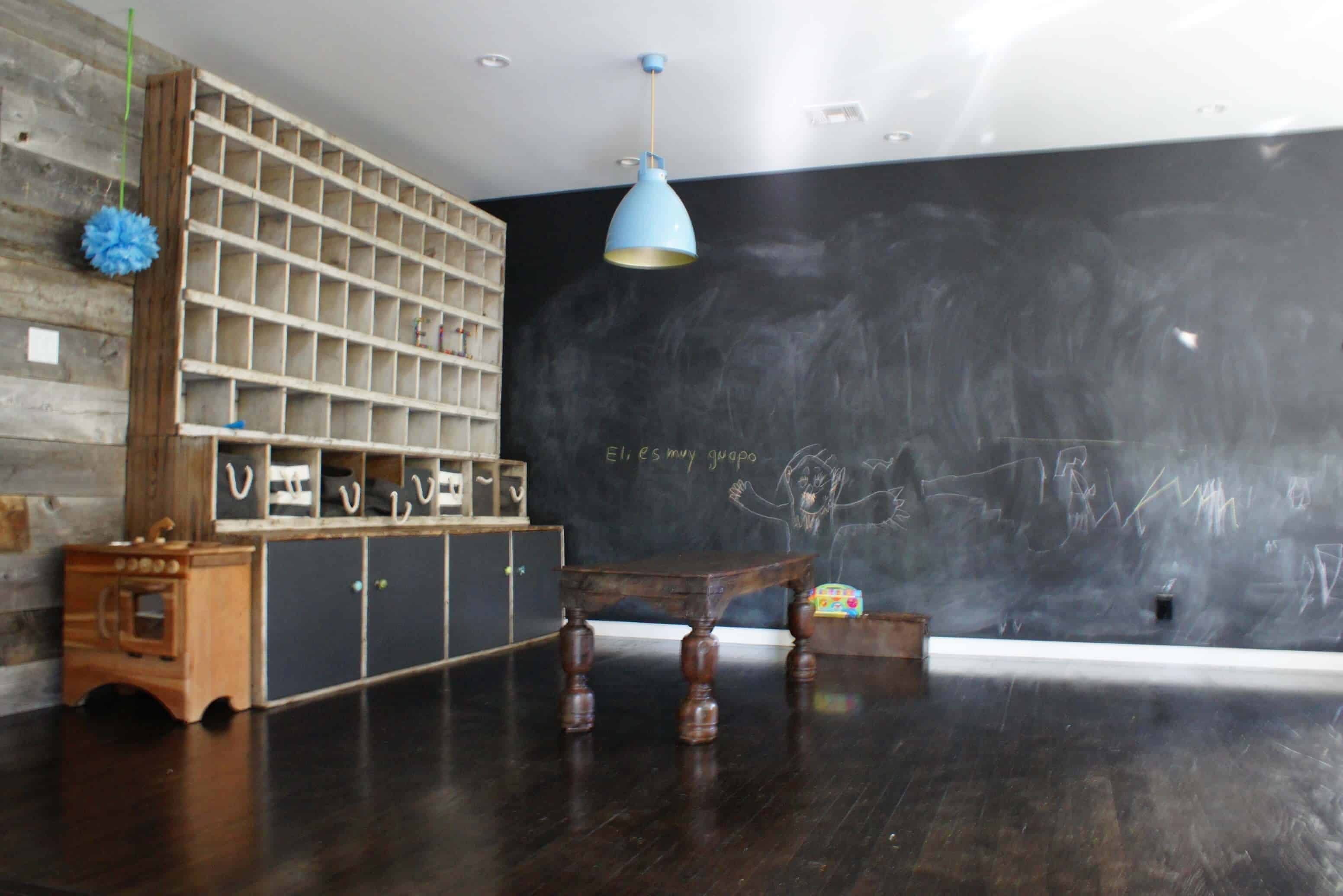 Obviously a VERY good place to start. The architect (Eric Olsen) had helped them make the decision to paint the back wall with chalkboard, bought them that awesome pendant light and the vintage store shelving unit. You can see some of the rustic wood cladding he did all over the house, which is sadly kinda edited from the story … don’t worry I’m doing a separate post of the missing rooms where you’ll see a lot of that.

The challenges: Mainly just lack of color, furniture, fun, and figuring out what to do with that shelving unit.

I now regret my childhood for I wasn’t playing in such a room. Kidding, Ma and Pa. We knew we needed color, so color is what we went for. They had that teal chest that was in their closet and we unearthed it, and put it on that wall. As much as we loved the chalkboard wall, it was a big black box. Eli is turning three this year so he is still little and can’t really draw on the top half so we knew we had to engage it somehow. We figured it would be a great place to display his other art and it could rotate as they saw fit.

The frames you ask? We bought them (new, shiny, and bad, but good shape and scale) from Aaron Brothers during their buy one get one for one cent sale and then painted them gold and white. We figured it was a good opportunity to make a statement instead of just painting them all white or getting all wood — this pops off the wall, and really elevated the amateurism (sorry, Eli!) of the artwork.

The rug is a Dwell Studio classic — the Draper Rug and it’s awesome. (I can’t find the yellow one on the site, but I found this yellow one instead.)  The white poufs you can get, well, a lot of places now and that gold lamp was a boring orange lamp that we spray-painted gold and put a fresh shade on.

But what about that monster of an amazing shelving unit. What do you put in that thing that is A. inexpensive, B. functional, and C. looks good. Nothing. There is nothing functional that looks good that we had the budget for. All the pockets are different sizes, and before you say “A collection of … vintage cameras/spools of thread/stuffed animals/wooden blocks, ” I harken you to think of anything that is cool, that is worth collecting, and less than $10 a piece. We needed 65 of these bad boys. Someday it will be wine storage, but for now it’s in the playroom, so obviously that would be strange. 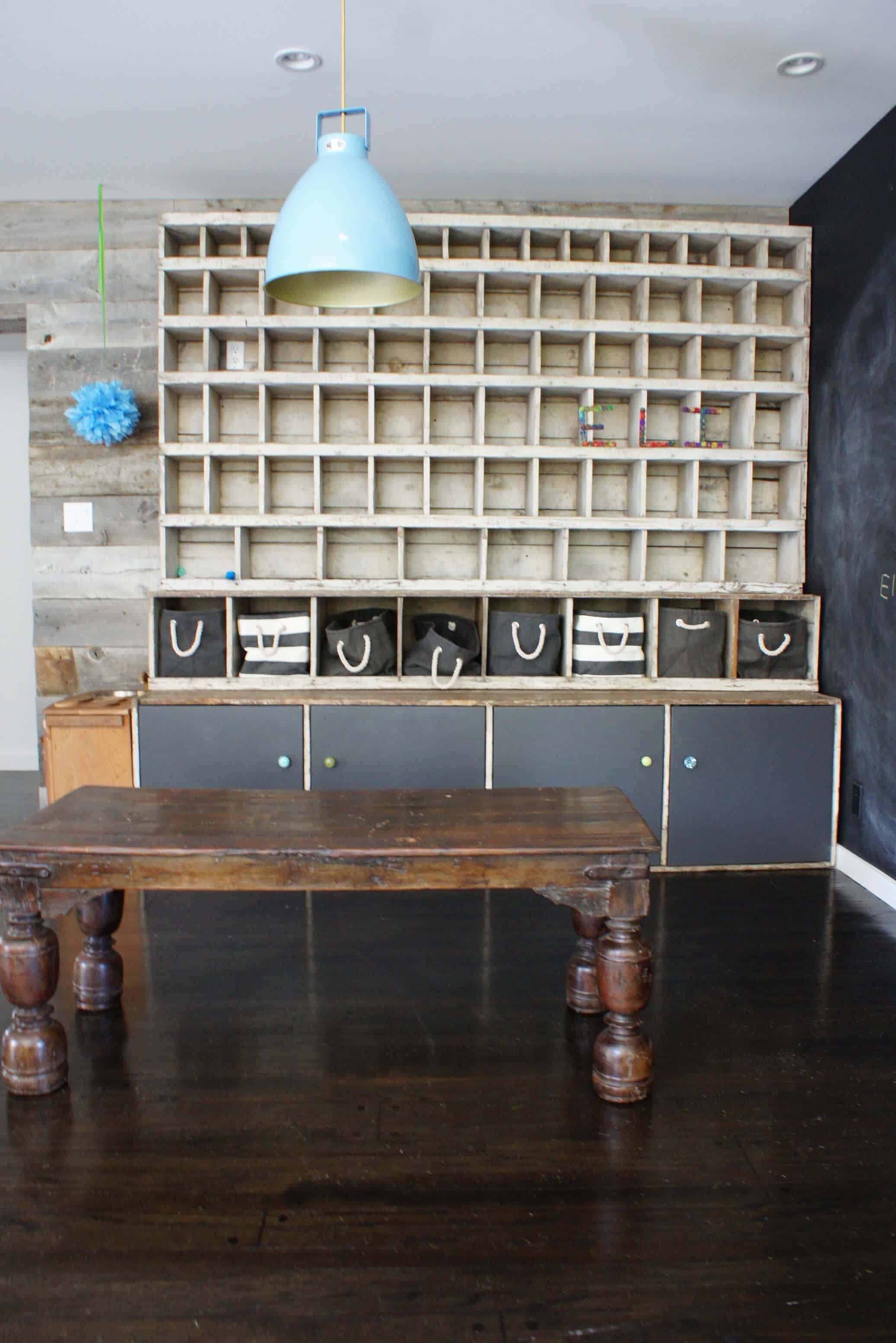 Drum-roll please … the AFTER:

Yep. Painted the inside of standard mason jars. About $1 – $2 a piece. The whole job costs $500 in materials (and yes, while we did spend around 15 hours on it, it was before our hourly business model so it was included in the original design fee + we enjoyed doing it :)) 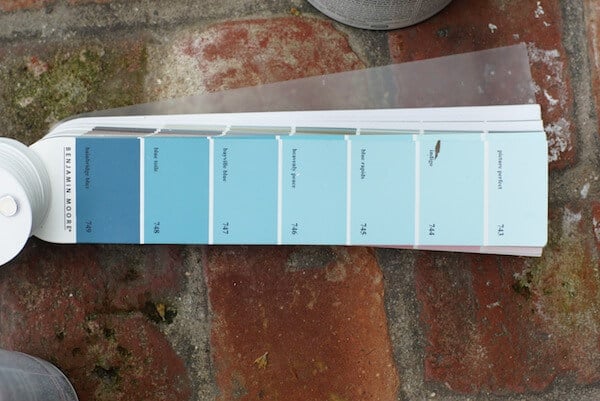 There were a million different ways to do this — stripes, random pattern, but we ultimately settled on shades of the same color and just took this Benjamin Moore paint deck, and had a quart of each color on that page of the fan deck mixed.  We started with dark on the bottom so it didn’t feel top heavy. Like ma body. 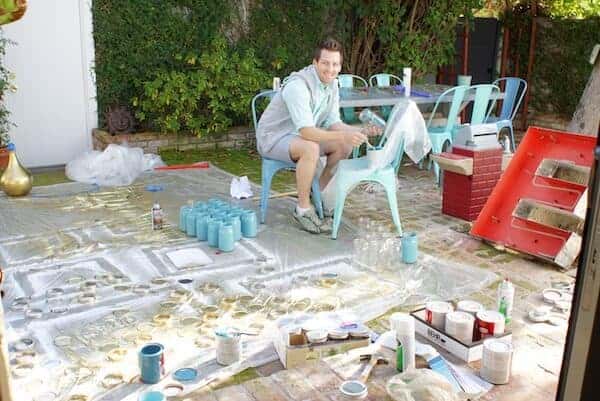 Oh hey, Landy. I love how your shirt matches the task at hand. Now that’s a good, properly brainwashed, employee. 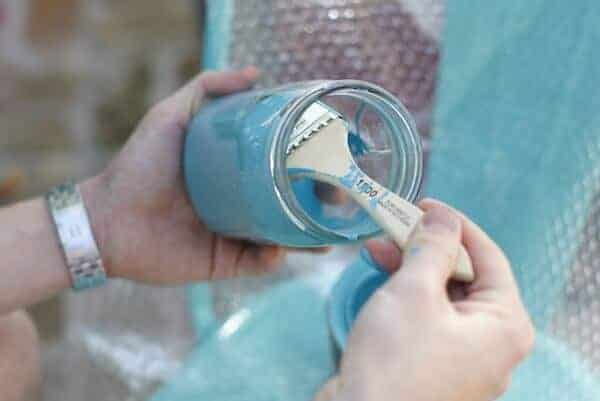 It’s common house paint; water-based. Nothing special. Swirl it around with a cheap brush, let it dry, do two coats … at least. 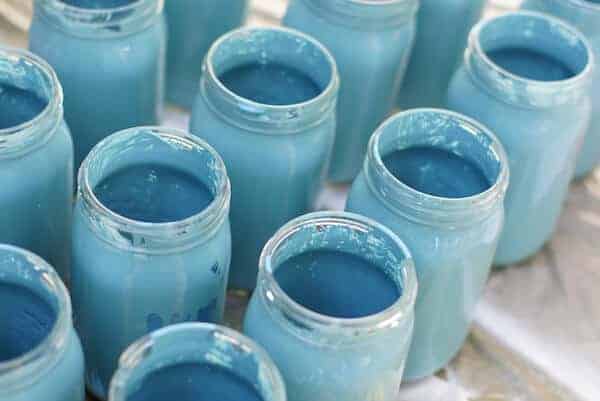 After the first coat. 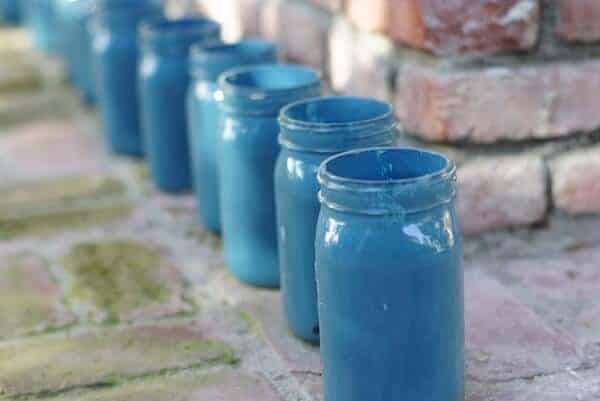 We didn’t even clean off the brushed in between colors — we liked how they kinda mixed and marbled around.

DUDE. I just searched for about an hour in my files for the drawing I made to determine all the sizing of the jars for each pocket because you know what I had to do to figure it out?? F&@KING MATH!!!! that’s what. It took me hours to figure out that the bottom row needed to be quarts (or whatever they are), then pints, then pints stacked on top of each other, then 1/2 quarts, etc. Wait. I just noticed one is missing the top right corner. I swear it was being touched up when we shot this (not for the magazine, but for scouting shots with Bethany).

Anyway, it was a very inexpensive (relatively) project that anybody could do — we didn’t have to hire anyone, we didn’t have to spend a ton of money, and it brought color but also reflection into the shelves (and reflection  = light and life). If we had just a piece of color (we thought about doing colored paper boxes) it would have still left it feeling dead. The glass reflected so much light (which is why we chose to paint the inside and not the outside of the jars).

Whew. Up next, the family room … 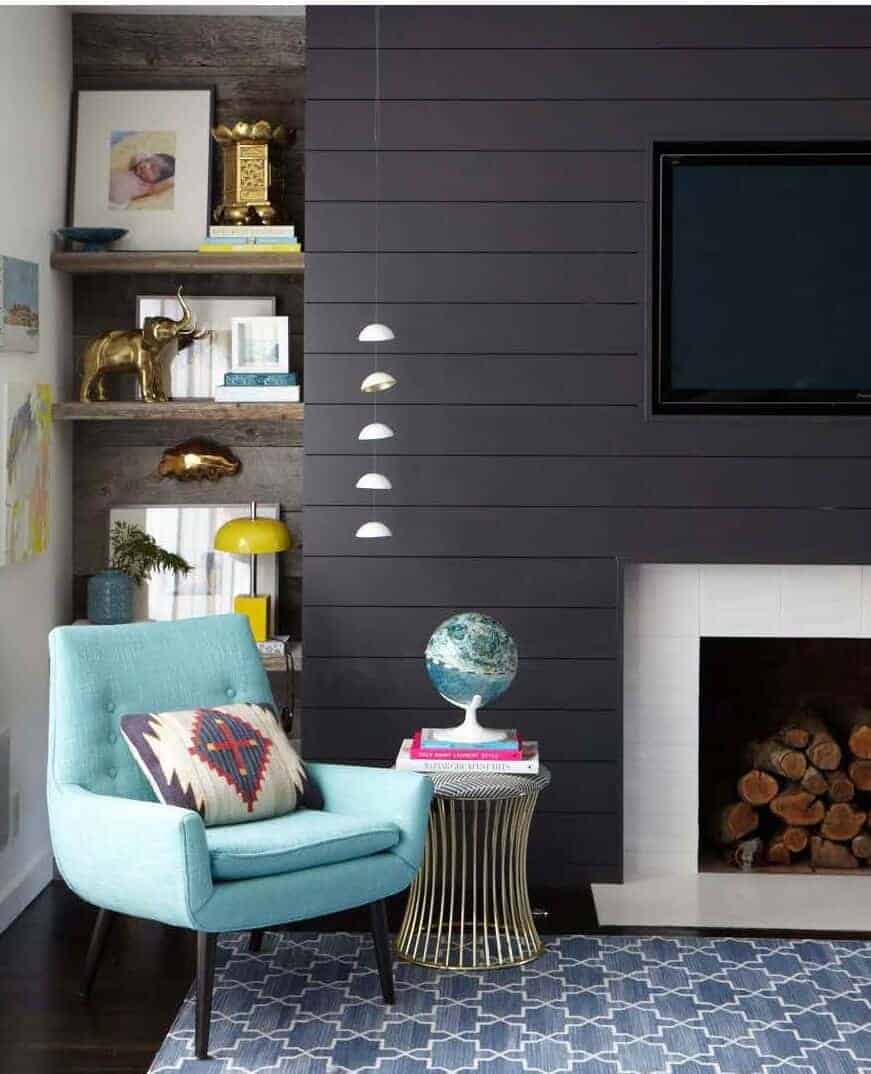 Except I just realized that I literally have ten more rooms to go, which would make this officially the longest post in the history of long blog posts. Yes, longer than most Young House Love posts (which I read every word of:)). So I’m going to spread this house out over a few posts, a couple rooms at a time so your eyes don’t glaze over, and I’m not spending 16 hours on one post.

Come back tomorrow for the family room and some cute vignettes, then later the kitchen, dining nook, and dining room, and lastly, the master bedroom, bathroom, and office. I already posted the guest room, so check that out HERE.

It’s a house tour, but the old fashioned way. Meanwhile ask any and all questions you have in the comments about the spaces above, and I’ll get to them and answer all your questions after my 19 meetings tomorrow.  🙂

36 Comments
Oldest
Newest Most Voted
Inline Feedbacks
View all comments
Our sites use cookies to improve your experience. Learn more