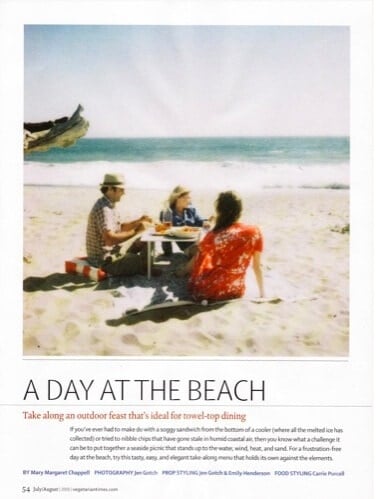 wait, i'm sorry. you didn't realize i model, too? so weird.

In honor of our upcoming holiday weekend here is a story from last year (wait, maybe two years ago, i forget) that my friend Jen shot (from ban-do. yes that Jen) for a Veggie times fourth of July picnic.  You might notice that i’m also a model.  Not sure if you knew that.  I don’t go around bragging, nor do I so much get paid to do it, but most of the best models in the world don’t get paid very much for editorial either.  (that’s actually true, they do it for exposure/tear sheets and like $250/day).

Anyhoo i first started my modeling career when i was in the background of a garnet hill catalogue, holding an umbrella.  Oh my god, you’ve seen it?  thank you so much.  I was ‘magical’ they said.  and blurry, actually.  but it takes natural talent to look blurry, have you ever seen Kate Moss be blurry in the background of a bedding catalogue? thought so.

Then Martha had me playing a ‘mom’ (when I was like 24) for an advertorial about some backache medicine. I had to look like i was in pain while i put together this wooden toybox in the most awkward position where i actually was in pain.  ‘oy, my back.  hurry Martha get me some pantone chip #256 color blue pain pills that happen to perfectly match my blouse, eyeshadow, toybox and rug.’
oh yeah, and there were a lot of ‘Emily and Brian’s have fancy romantic dinner’ shots during the summers where Cindy and I did the Martha Stewart for Kmart outdoor furniture catalogue.  Those were hilarious, i’ll see if I can find them.  We would shoot at the most amazing houses all along the east coast, set up the furniture, prop it like a romantic dinner (or picnic, or dinner party, etc) and Brian and I would sit in it, cheers, laugh and look like the smug owners of mansions.  We were 26 and had 14 dollars in the bank, but apparently we invested that money well and bought this house in cape cod where we eat lobsters daily with huge bowls of lemons.
(yes I have read the catalogue Living blog, and LOVE it – i’m going to do a ‘in defense of catalogue stylist’ post next week.  stay tuned.)
Actually the last two i got paid for, come to think of it.  And for Garnet Hill I got a free Eileen fisher 100% linen duvet, which lasted me until last year – highly recommend.
Just in case you think i’m bragging, basically what happens is they realize the shot needs some ‘life’, aka a person.  or a dog. or a kite.  But we’ve shot too many dogs already and they didn’t book any real models, so a stylist assistant might do.  i’m not kidding.  It makes sense that an assistant gets asked first (it would be kinda insulting if they asked the prop stylist to get in there).  They often don’t want people that really look like models, just normal people that aren’t totally disfigured.  So i fit the bill. The client wouldn’t have to pay for travel or lodging when I was already assisting on set so they got a good deal and I got a double day rate.  Not bad for holding a plate of cupcakes while I sway back and forth for fifteen minutes way in the background.  (Subsequently Cindy kinda had to assist herself, sorry Cind – and she was the one that insisted i get paid).
Anyway, for Veggie times (the story above) there was no budget for models.  And that was a problem.
You can’t have a beach picnic without people.  It will look like the people drowned in the ocean or got kidnapped.  And that’s not a very celebratory July 4th.
Yes, that’s Brian, wearing the hipster hat. its not his, i promise.