Yes, it’s a total coincidence that both yesterday and today’s post are child-centric, although yes, I do love me some miniature humans — and we are hoping and excited for a miniature Henderson too.

You know. Get ’em hooked.

So, for all the Apartment Therapy readers and my loyals alike, here is a nursery makeover. Here’s what the room looked like before:

It’s pretty much a fact that every nursery was once the guest room where people put leftover stuff. And this one was no exception. They actually already had a great guest room that was well put together (and now looks even better thanks to Orlando and I) so this was basically just the leftover room. Also they had just moved in so that’s why it’s kinda thrown together.

That’s enough of that. You get it. We started with a blank slate — a white room with lots of light and tons of north facing light. So I created the plan: 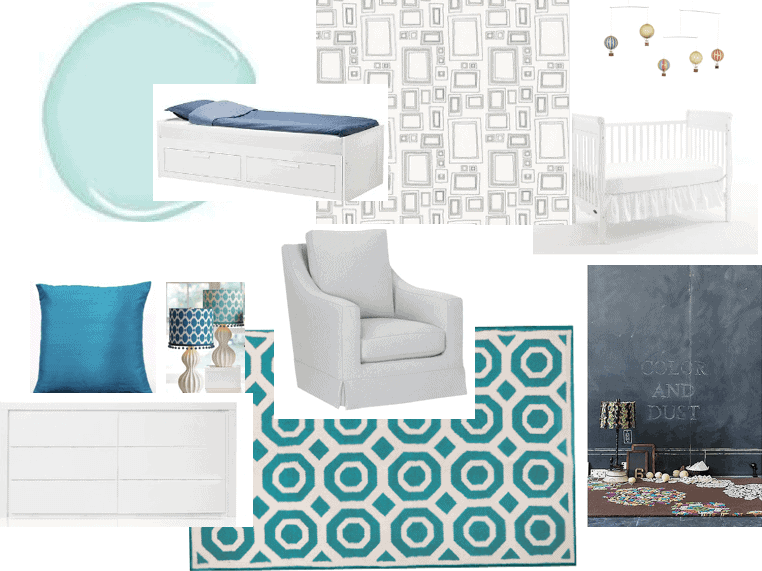 Here’s the mood board I made for the space. Normally what I do after meeting with the client is create a mood board for each room with tear sheets, color palettes, and collage boards like these. Each mood board takes about eight hours to do — playing with rugs, colors, accessories, furniture — making sure it looks good together, but that I like each individual piece … even if it’s just “stand in” pieces. As much as I want these pieces to be the real pieces, often budget or availability stands in the way and the rooms turns out different, but normally the same “vibe” … like in this case.

Overall, the goal was for it to feel young, happy, fresh, and playful, but still sophisticated.

The homeowners wanted this aqua color on the walls and I was totally down with it. I don’t use it very much, but Orlando is a MASSIVE fan of it. His blood runs aqua, and he was even more on board so I went with it. They live by the ocean and this was called “Ocean Spray” by Benjamin Moore so it seemed very serendipitous. (Remind me to tell you the one about how nervous I was about choosing an ochre paint for the walls of a client, and then I pointed to one and it was called, literally, “Leap of Faith” by BM … I mean, hello).

We decided to bring in grey to counteract the pastel-y nature of the aqua, and then give it some shots of peacock (see, there I am) and bright yellow to amp up the playfulness.

We wanted to do a wallpaper wall behind the crib and the homeowners LOVED this frames wallpaper by Graham and Brown. While I had seen it a lot before, I also think it’s a pretty great paper for a kids or family room. It’s neutral on its own, but then you can color it in or add photos, forever making it a living memorial to your family and the kids’ childhood. It’s funny that sometimes when something is so great it is EVERYWHERE and you get sick of it, but once it surpasses that ubiquity I normally get back into it because good is always good no matter how often you see it. 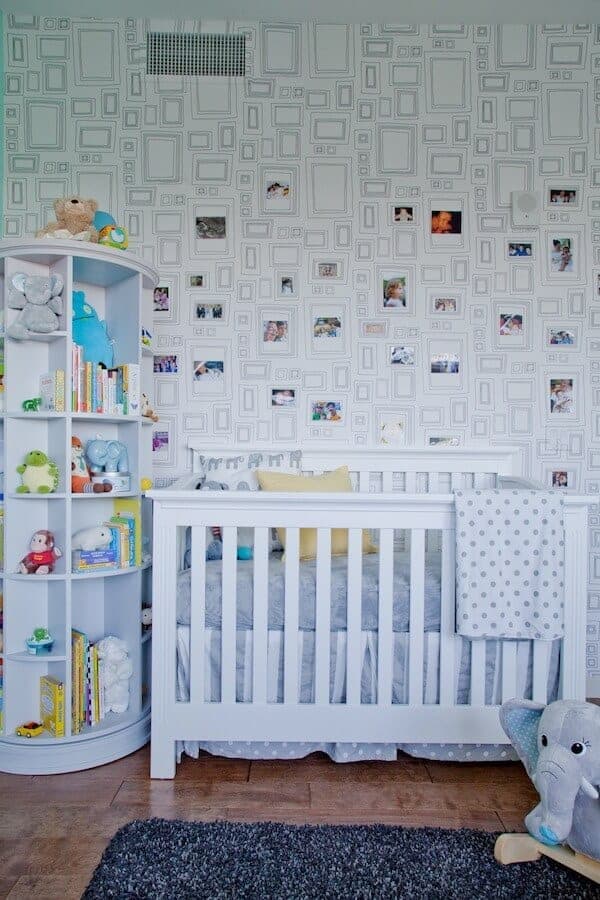 Oh, yes. It’s VERY cute. And that wallpaper is awesome. The crib was the homeowners already, but it worked in the space.

The rotating bookshelf is from PotteryBarn Teen, but we had it painted to work better in the space. We had a painter come over one day and paint, like five pieces of furniture, so I think this piece was like $250 to paint. Orlando spearheaded that whole thing and really did so much more than I did in this nursery.

The baby bedding was custom from Etsy and the homeowner picked it out so I have to give her credit for that. 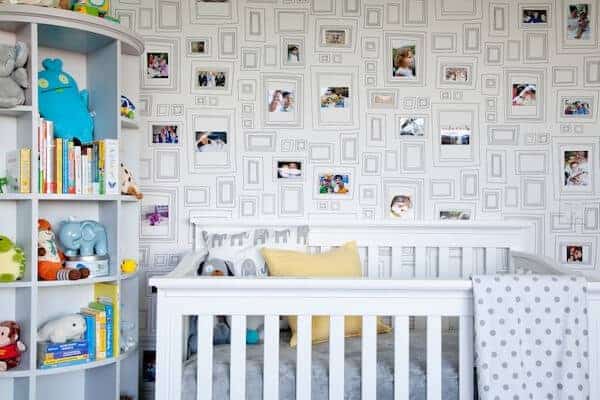 Orlando also had this dresser painted to match the bookshelf, and let me be clear Orlando did A LOT of implementing the design of this room and house. I did the art direction, but he made it all happen. Hire him. 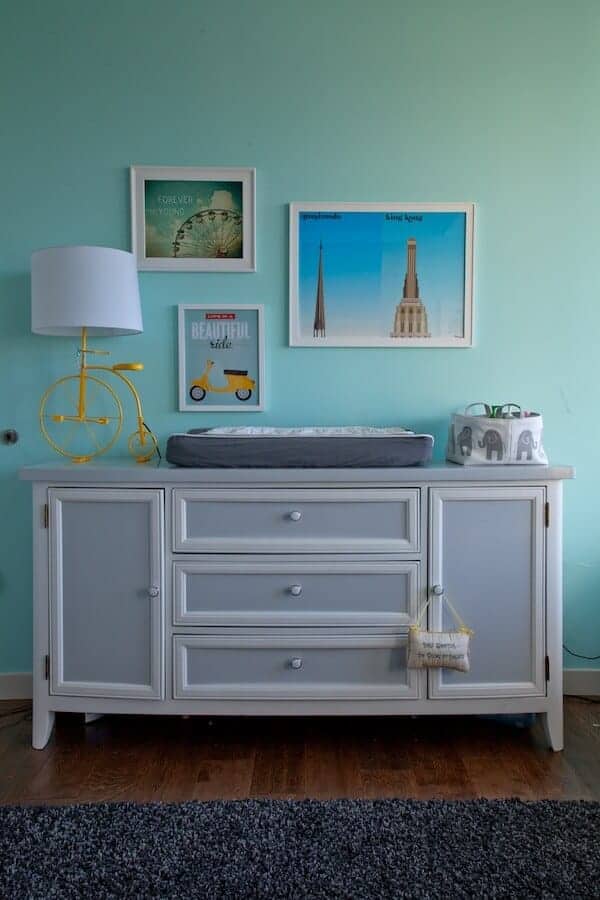 It was vintage, I think $180, then painted two tones. Nice job Orlando, it looks great. My contribution to this space was the yellow bicycle lamp, of course. I found it at a thrift store for like $23 bucks or something, and then we just spray painted it and added a shade for $40. It might be my favorite thing in the room. The artwork was picked out by the homeowner, all from Etsy, but we framed them with inexpensive frames and hung them up. 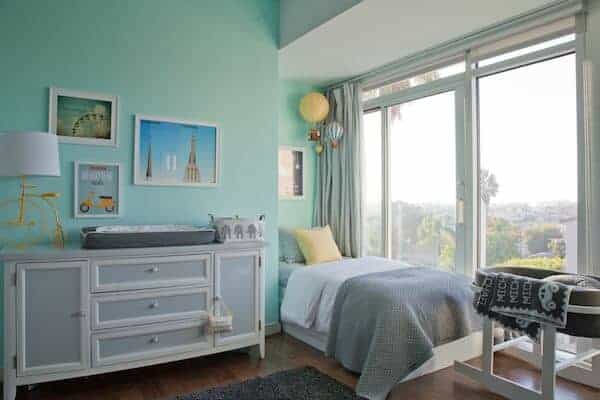 The twin storage bed is from Ikea and the hot air balloons are from Authentic Models (although it’s a wholesale company so I’m not sure who sells them to non-designers — but I see them around a lot so they shouldn’t be too hard to find. In fact HERE.) The bedding is a West Elm blanket and their striped sheets. Then we bought Aina linen curtains from Ikea and the homeowner had them lined with blackout lining and hung them on an Ikea hospital track across the ceiling. 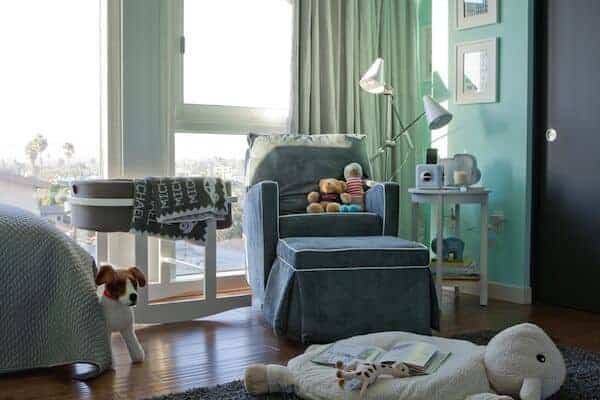 The nursing chair is from Little Castle  which the homeowner chose. I really wanted to get the one from PotteryBarn that you see in the moodboard, but they had none in the LA area to sit on to try out before customizing. And there was no return policy because each one was custom. Not exactly a smart business move. So the homeowner went with this one because her friend has it so she could try it out — and it’s crazy comfortable.

The charcoal closet doors is chalkboard paint, which he is way too young to utilize now as he is only six-weeks-old, but later he will.

Pics of the rest of their loft later, but what do you think of the nursery? When you are in the space it feels so happy and fresh, which is pretty much what we were going for.