I love a bright and airy bedroom. Mine isn’t — it’s more like a big warm cave that I love sleeping in — but there is nothing more inviting than a bedroom that feels like you are sleeping up in the clouds. This room is wall to wall, floor to ceiling, east facing windows. They had just moved in, although they had all these pieces of furniture to work with. They wanted it to feel really fresh and clean, but with a “modern traditional” bent. They like things that are traditional but with an updated feel, less granny.

Here we are before:

It’s one of those cases where they had the major pieces, but wanted me to bring the “style.” The “pizazz, ” may I never use that word again. Do you think that “pizazz” and “funky” are best friends? Because if so, shall I never be invited to that party. Although word on the street is that I’m “preternaturally perky, ” so that pretty much means I’m going to be the host of that funky party. Perhaps I’ll even be bubbly, if you are unlucky. 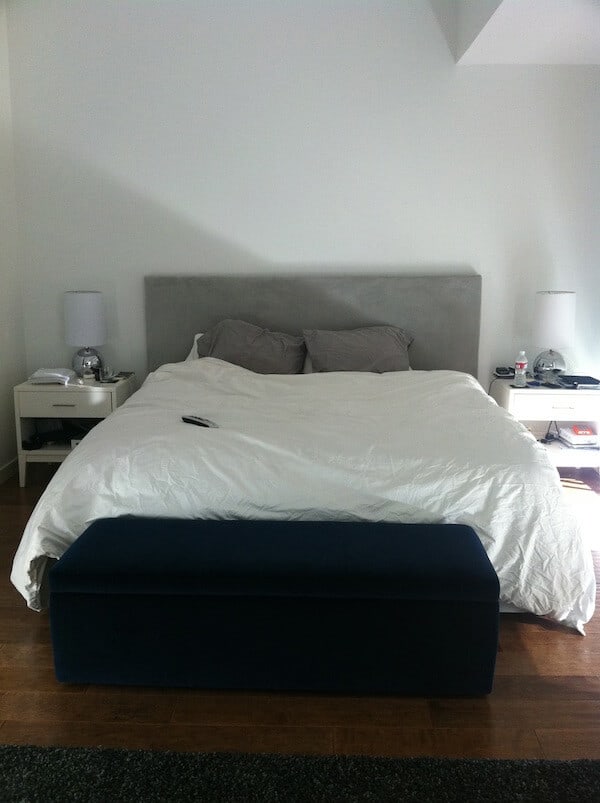 On the other side of the room, opposite the bed, there was a dresser with a TV above it and an unaddressed window nook next to that. It’s dying for one to read a romantic novel involving vampires and paranormal teens on it. But instead it’s full of random things. Clearly a need for storage. 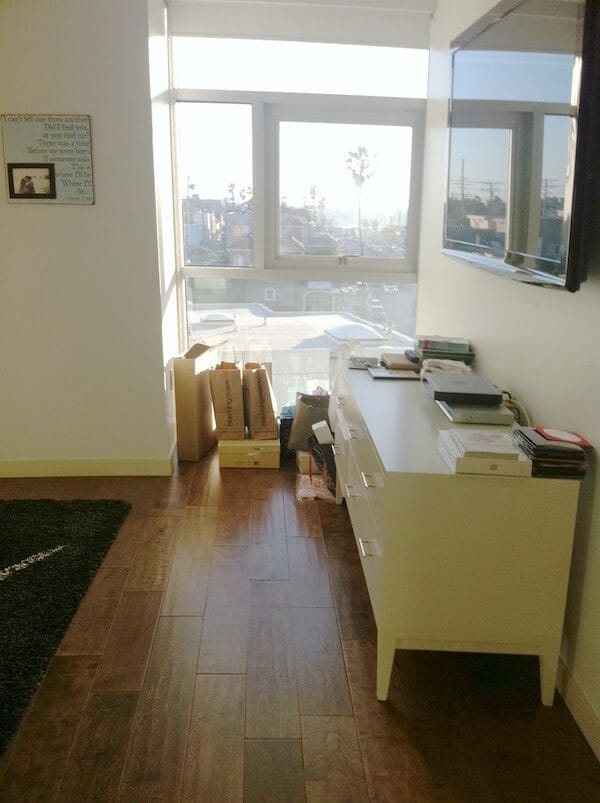 So I made this mood-board: 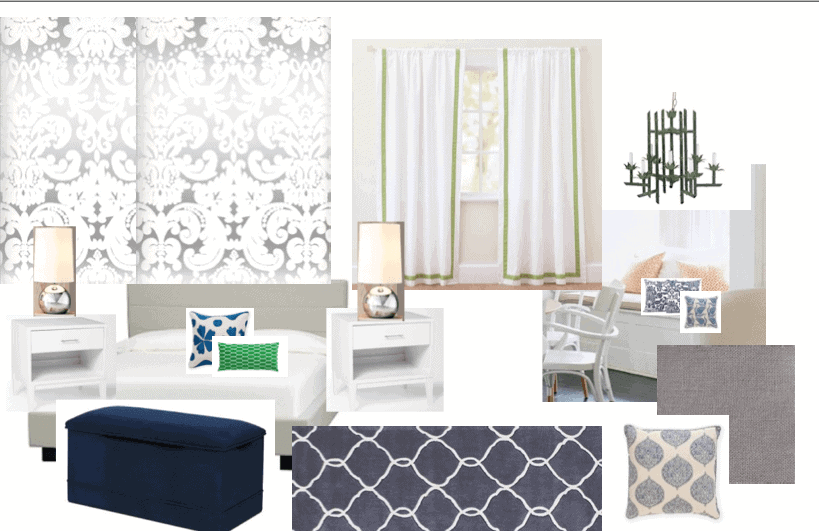 We wanted to keep it quiet, so not a lot of color, instead using more textural contrast and some pattern mixing. I obviously kept their headboard, two nightstands, two lamps, the bench at the end of the bed, and the dresser. Basically all we needed was wallpaper, a rug, some pillows, a window seat, and curtains to add softness, and dare I say, “romance.” 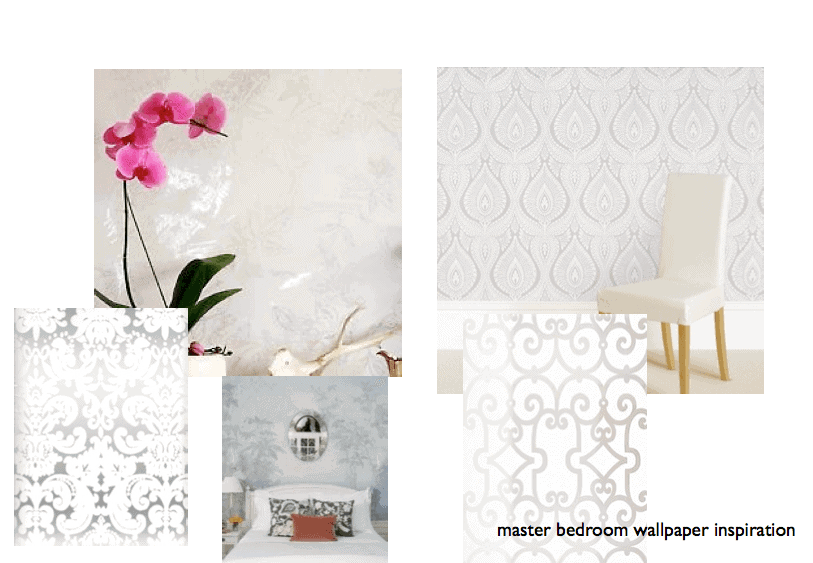 I figured a metallic wallpaper on the headboard wall would be the perfect way to bring interest and texture and pattern, but SHHHHH, be very quiet. That’s the thing about metallics — they are actually just neutrals. They aren’t really a color. Instead, they warm things up (gold/brass) or cool things down (silver/chrome). We decided to bring in a wallpaper that was more gold than silver, but it wasn’t crazy gold — much quieter. 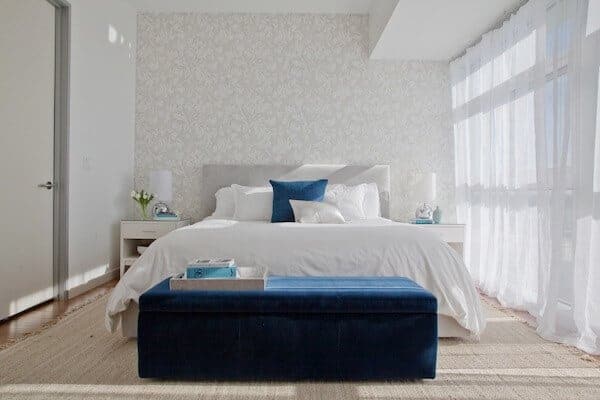 Ahhh. It’s crazy relaxing. Every time I walk into this bedroom I just want to get rid of every beloved tchocke and knick knack I have and just relax in the sunlight that is California.

Yes, it’s pretty different than the mood-board, but that happens sometimes just based on taste and budget. In general it still “feels” the same, but even quieter.

– bench at end of bed,   Room and Board, custom color.

– Rug, Rugsusa, sisal. We loved the fringe on this, and the bleached out color was still so light and beachy (since we were near the beach).

– linen sheers, West Elm.  And don’t worry, we kept the blackout shades, just added the sheers for softness and a light/privacy filter during the day.

Yes, that is a lot of West Elm. And while I love West Elm, it’s better to mix it up. But I know what happens when you move into an old space; you get rid of all the furniture you don’t like so you kinda have nothing to actually sit on when you move in. So you go to West Elm and buy everything. I totally get it. All of these pieces were easy to work with, but in a perfect world those lamps would be large table lamps that were really unique, to kinda shake things up a bit. 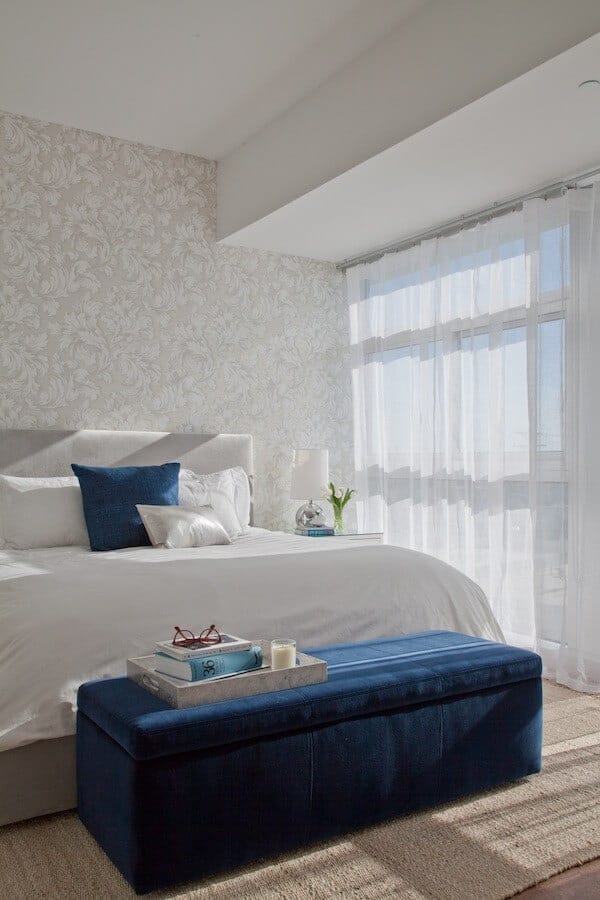 Wallpaper: I got it from Astek, but sadly it is only to the trade and I couldn’t figure out where else one can buy it. If you are a designer, you can order from them and it’s item #ET30003. It was very affordable at $60 a roll, which came to $300 total. This picture simply doesn’t do it justice:

I really wanted to do the wallpaper in this silver peacock wallpaper by Genevieve Carter, but it was a bit feminine for him, which I totally understood. But, man it’s beautiful: 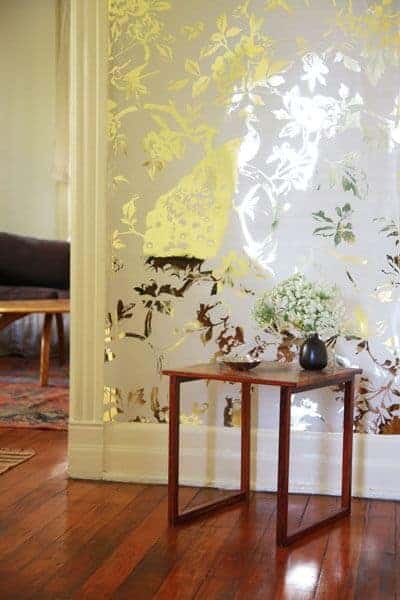 This side of the room turned out so pretty and quiet, as well: 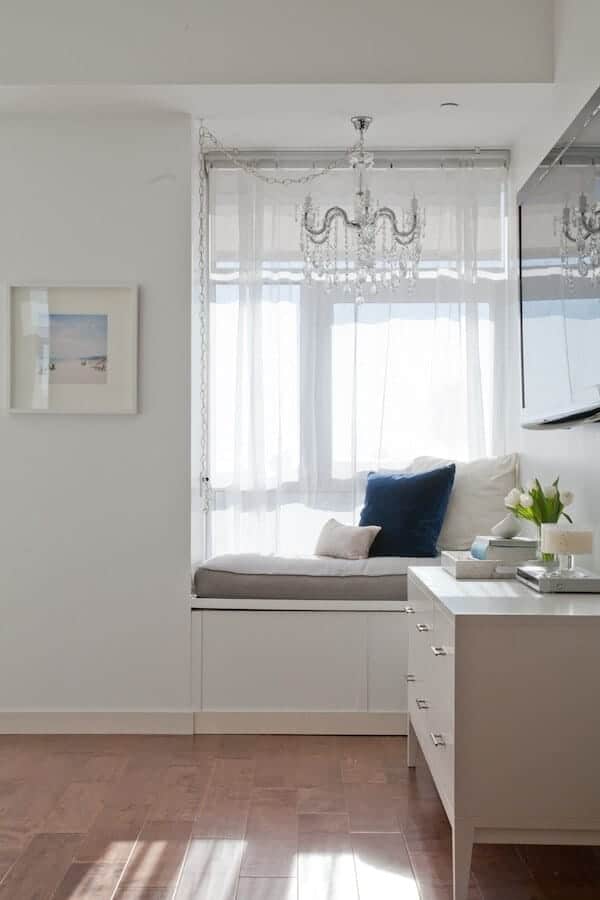 We had the window seat custom made for around $1000 (including labor) and it has hidden storage so it lifts up and you can shove all of your unsightlies in it. The cushion was custom made for $200. We gave my upholsterer the dimensions of the seat, three yards of linen and he sewed it right up. It’s simple grey linen with piping. We chose a light color because, yes, it’s going to fade over time. Then the homeowner went to Room and Board and got a pillow made of the same fabric as the bench to tie everything together.

That pretty footed candle with the gold polka dots is from Illume. They sent it to me and normally I’m anti-scented candles, but this one is just so pretty and smells so good that I’m addicted to it. 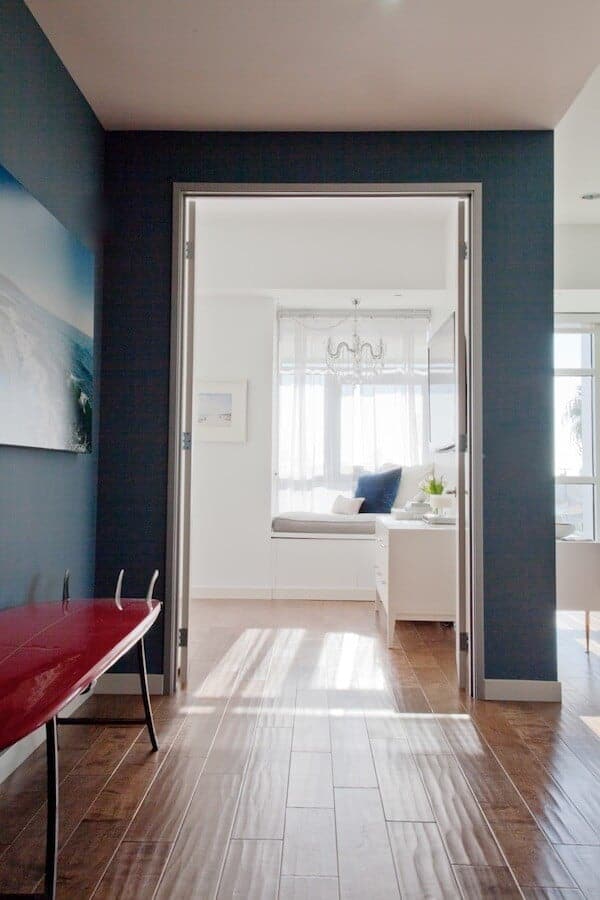 They bought the chandelier on their trip to Venice (yes, they live in Venice CA, and they only vacation to Venice, Italy) and we decided to swag it instead of installing it to take the seriousness away. Just as a general note, men don’t like swags, women do. It’s hilarious. Every time I propose it or a woman proposes it, the husband quickly responds as if we just said that she’ll forever wear a muumuu to bed. It’s not that big of a deal, it’s just a swag, gentlemen. It created such a pretty reading nook.

I’ll have more on that entrance shot next week.

All those lovely “after” photos are by the lovely Bethany Nauert.

Well, what do you think? Are you more “simple, white, hotel style bedroom” or “eclectic, interesting, dramatic bedroom?”