One more room makeover folks, from the Curbly house. I’m actually kinda sad that this is the last post because its just been so satisfying to design/hangout/see/post about. Sometimes I wonder how interior designers live without properly photographing their work – meaning, it would be such a bummer not be able to look at and share photos of work after you are done with a space. It just makes it so satisfying.

This room was not originally part of the plan (see the living room, dining room and master bedroom makeovers) but then it just had SOOOOO much potential that of course I threw it in because I wanted the content – 4 room makeovers is better than 3, no? I get greedy with my portfolio so the more I can add bright sunny rooms to it the more I end up just saying, sure .. i’ll do it …

Here is the before, way before I got involved. 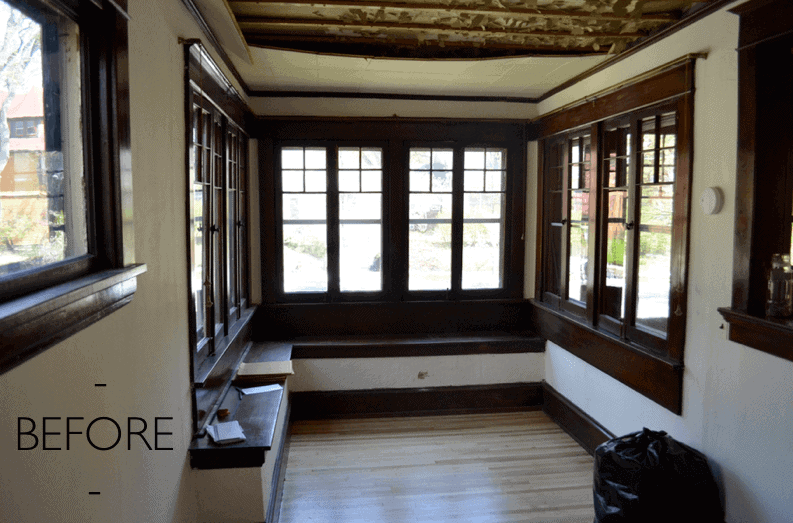 Now, before all you wood lovers freak out too hard (because you know what is about to happen) know a couple of things:

– Any and all painting was done before I was involved BUT I would have recommended painting the wood based on the clients needs/wants and style.

– While this kind of moulding/millwork can be really beautiful it is VERY dark and only lends itself to a few specific kinds of designs and styles. Its not for everyone. I LOVE the idea of it in restaurants or houses where you want to feel cozy, dark and warm (my Aspen house, my Alaska house, an English pub, etc). Its really masculine and really strong, just not for everyone. For a family who wanted their home to feel bright and happy, airy and visually calm – painting them white just made sense to them. Let the opinionated comments commence – I actually love this debate, but just remember its not your house, its not your family, its not your style, its theirs …

So the Curbly family got to town painting: 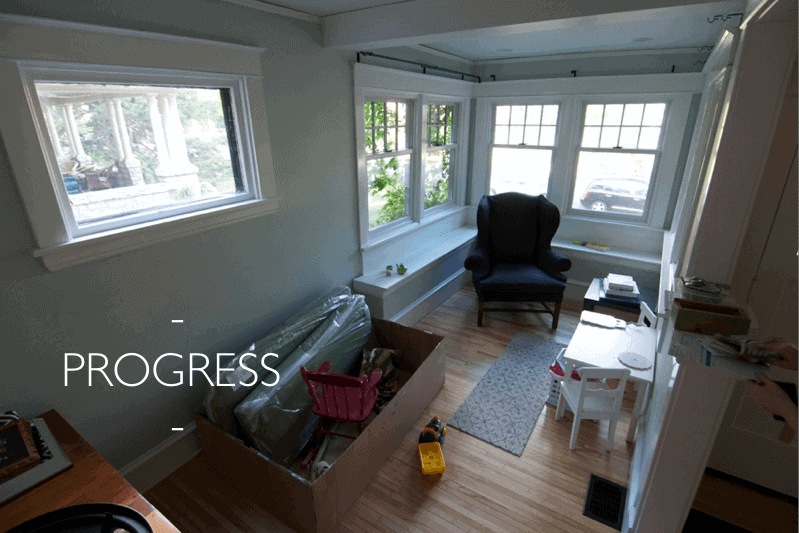 That’s when I got involved and my grubby little hands were dying to go to work on this room since it has such potential. When I arrived in Minneapolis, Orlando and I turned it into this: 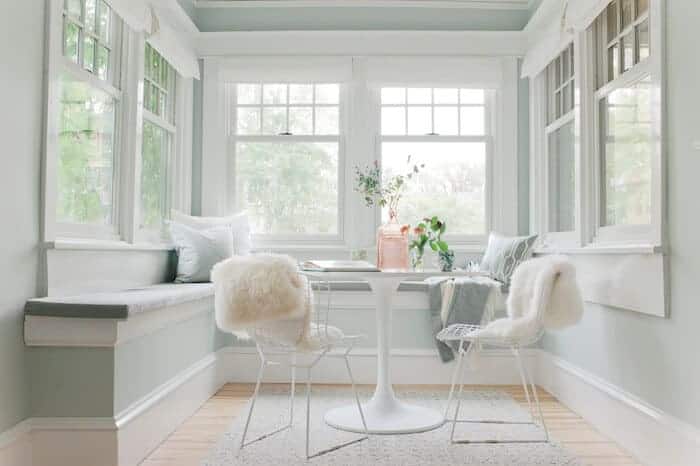 Only the brightest, simplest, happiest little sunroom ever. NBD. They had it first painted Sherwin-Williams Sea Salt SW 6204 on the walls, with the trim being Sherwin-Williams Pure White.  We made very few major changes – it was way more about the styling. We chose these great roman shades from Blinds.com  (Laura Ashley Soft Fold Roman shades in Casualle Milk from Blinds.com, ) that make the windows feel more finished and control the light – plus curtains wouldn’t have worked in here because there would have been so many of them, they would have blocked off the light and then landed strangely on the bench or on the floor; just too much fabric, too much happening. So romans, rollers or blinds were the only way to go. The style of the house is more classic/traditional so roman shades seemed the most appropriate. 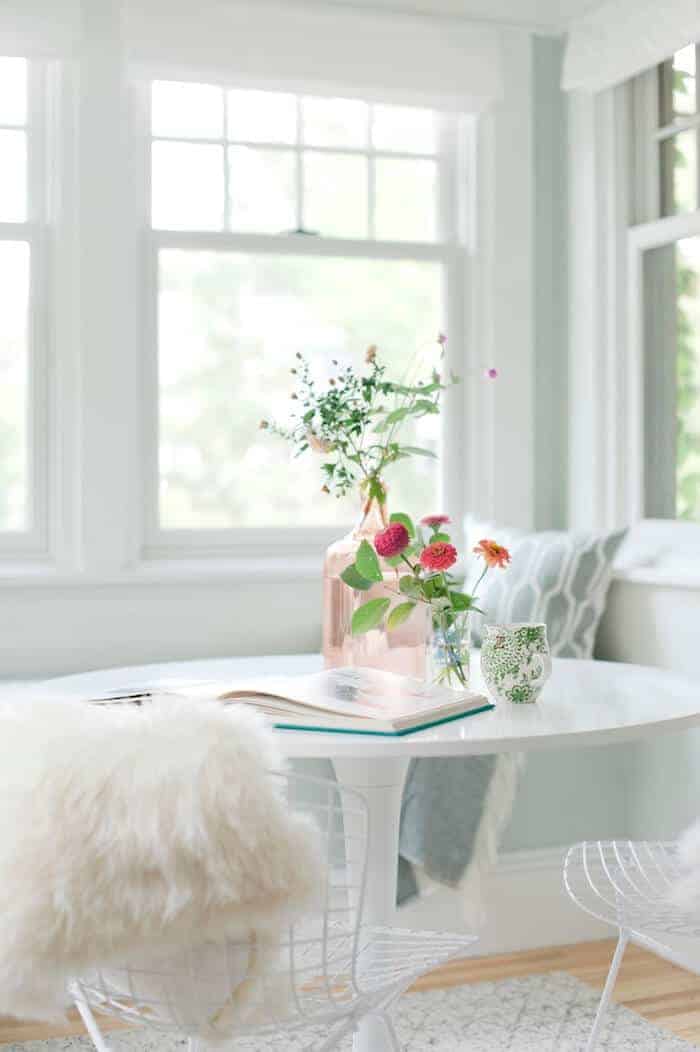 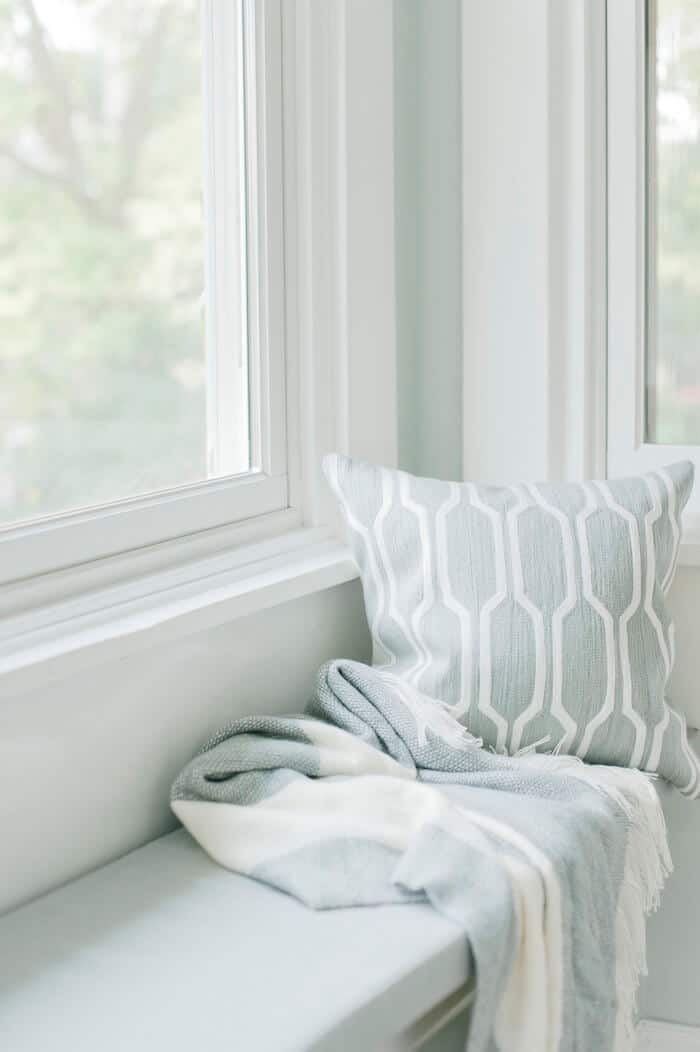 They had cushions made for the benches so it became more of a built in window seat – although its strangely high so its probably going to be more for kids to climb on and play around. The pillow is the Honeycomb Crewel Pillow from West Elm, and the throw is their Favorite Throw, which i’ve probably bought like 15 times now. For $30 its kinda hard not to keep buying.

They found these vintage bertoiia chairs on Craigslist ($200 for the pair) and then had them powder-coated (I think for another $200). 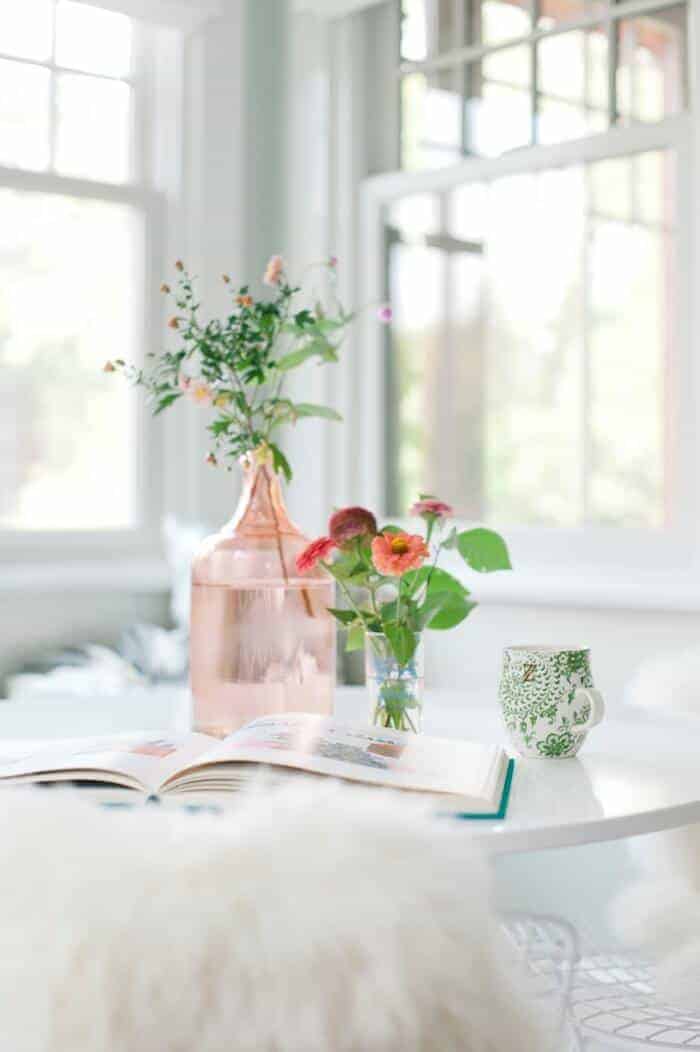 The flowers actually came from their babysitters back yard in St. Paul and were just so pretty and happy. I want to be sitting in that chair so bad, reading that design book, drinking that tea – its just all so calm and relaxing.

On the other side of the room became more of the play area because its attached to the living room and feels separate enough that the kids can make a mess without encroaching too much on the adult space. Before we got involved it looked like this: 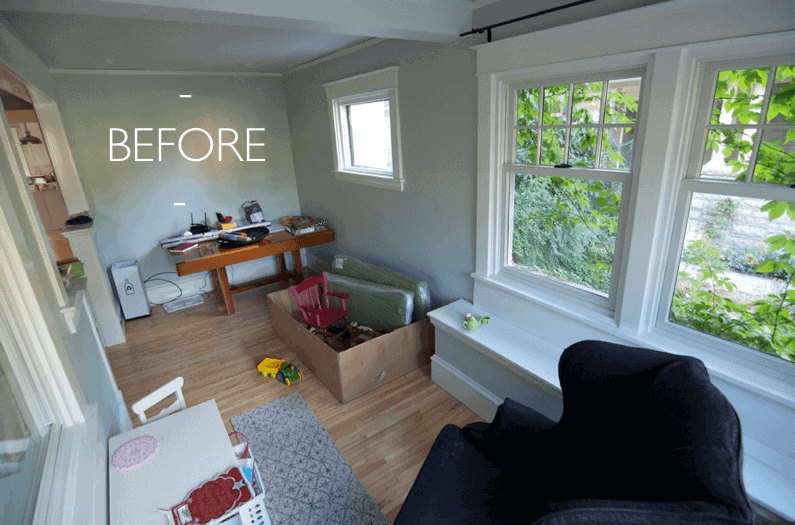 Its such a tricky room because its long and skinny and real furniture (like a sofa) wouldn’t fit in there in a way that makes sense. So we divided it in two different usable spaces – the little breakfast/reading nook and more of a play area. We added a fun grown up but kid friendly table (and no, we didn’t just use the same one from the living room – we bought two), a storage piece for toys and somewhere for them to hang their artwork. 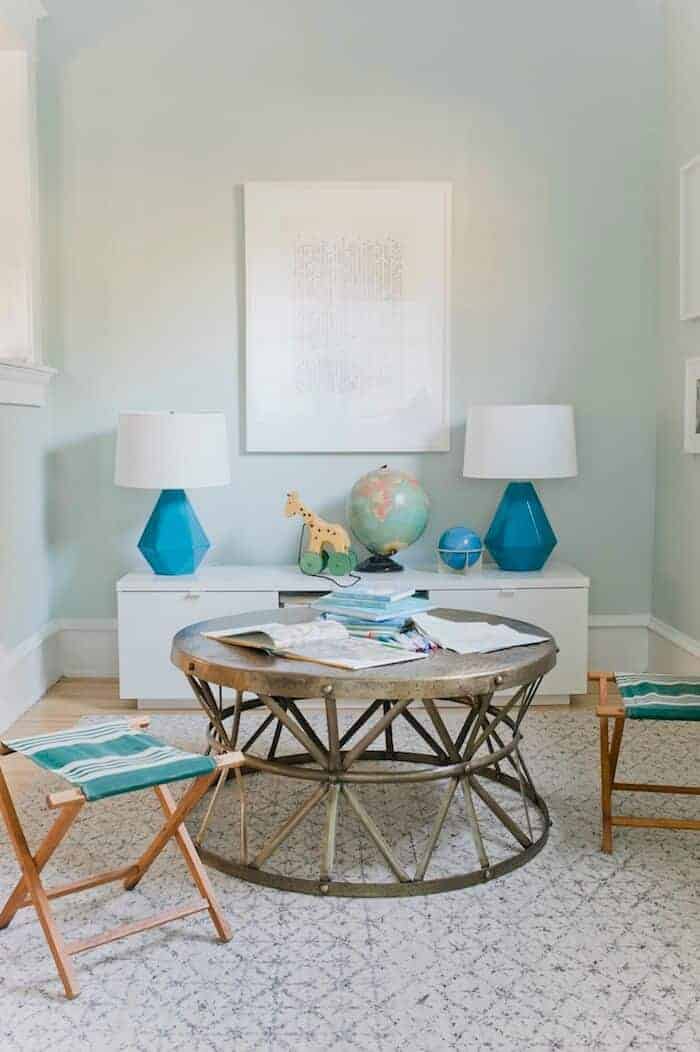 And of course we threw in some prop kids from the street, just to test how much fun this space is. The Curbly family kids are CRAZY cute and it was super fun spending the week with them. I kept telling the baby to talk to my baby and tell him what its like out here – and then also to be really really nice to his mom – specifically in labor, during whatever sleep method we use and through the teenage years. They agreed on a painless birth and thanking me during every speech he ever makes. 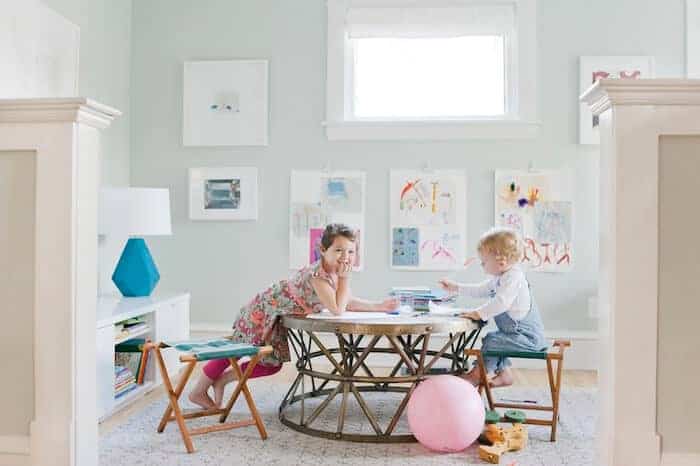 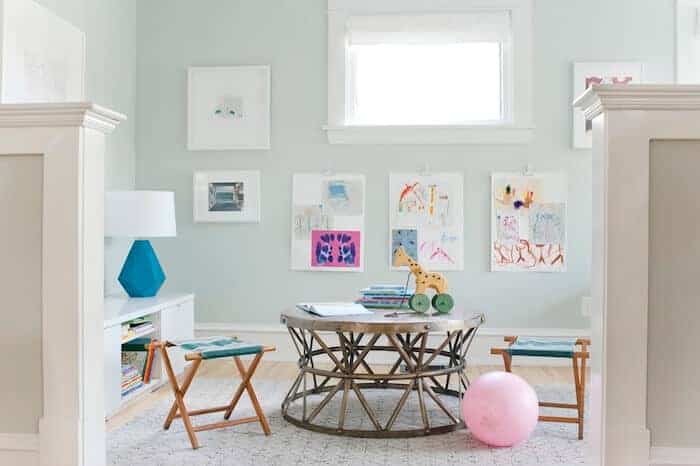 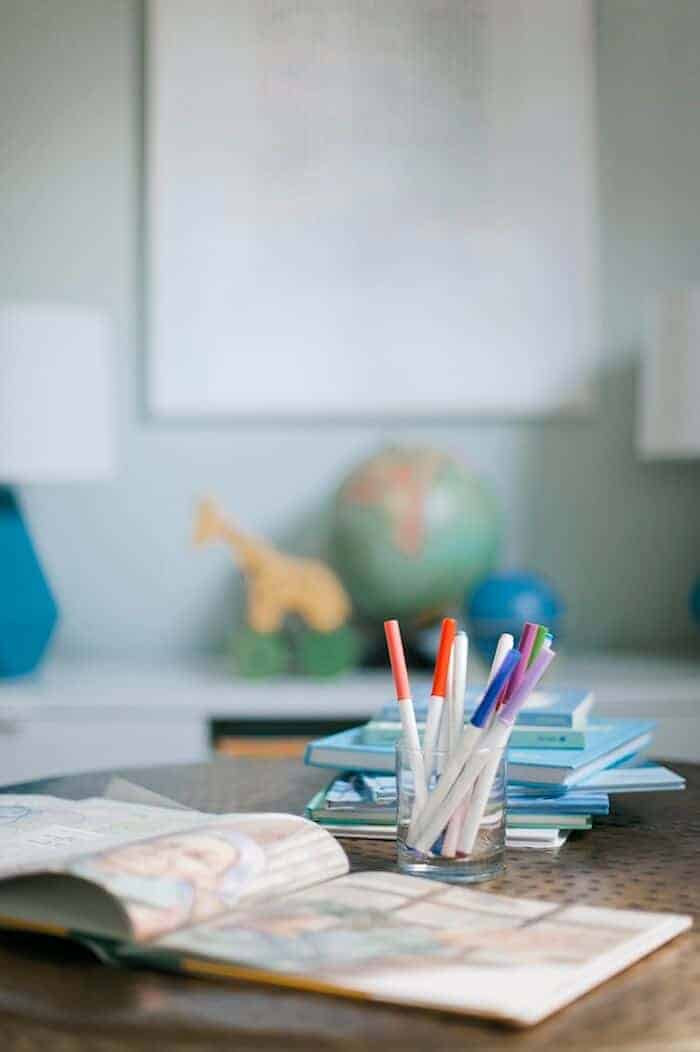 I’m actually dying to go to that room right now. Its just so clean, bright, soft and easy. Sometimes I just wish I could go back in time, have not read the Hunger Games or Gone Girl and curl up for a whole day in a room like this, drinking herbal tea that probably has some sort of woman looking VERY relaxed on the packaging, and just read an addictive, if not totally trashy, novel.

Must get me a sun room immediately.

For more of the Curbly’s Traditional Craftsman: The Bedroom | The Dining Room | The Living Room