There wasn’t a lot that we needed to do structurally to the house. No walls to knock out or rooms to build – just flooring, painting and changing out all the finishes and fixtures. But it lacked any storage for books, or built-ins, etc, and I have books and pots and vessels galore over here and I want to show them off. I didn’t want to just have a bunch of random bookcases all over the house, because I promised that I wouldn’t over clutter this house. So I decided to do one big built-in bookcase in the main space. Behind that black gate above is the walkway to the family room/kitchen area and that wall seemed like the perfect place to put it. Besides then it would be the massive, beautiful focal point when you walk in. I could style them out to my hearts content every day.

So I started trolling for inspiration. 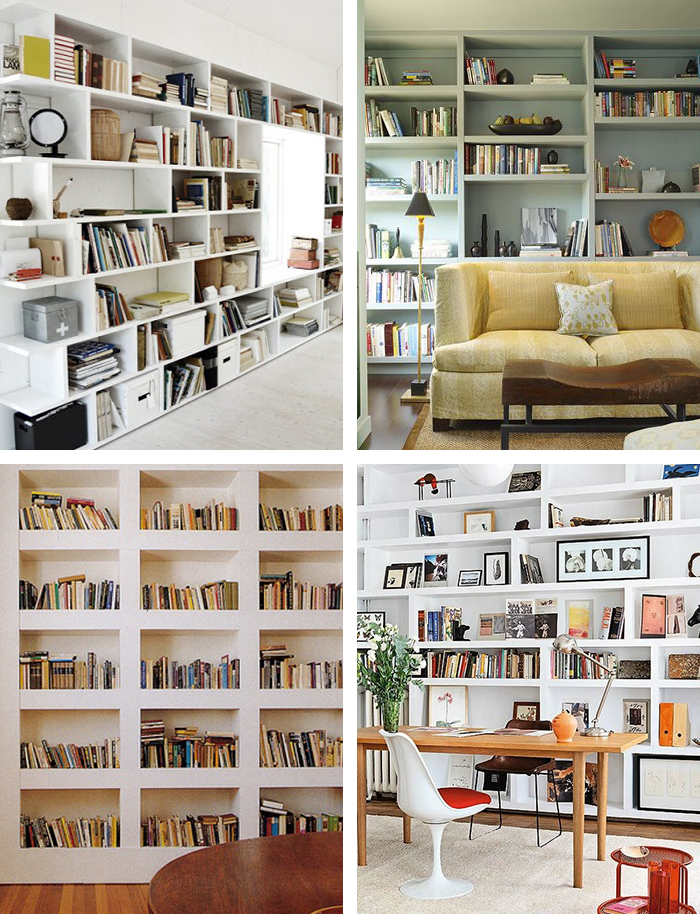 I knew I wanted something that looked original to the house. I wanted the shelves to be tall enough to house art and lamps inside as well as books. And I wanted it to be an interesting/fresh design. So then I found the inspiration, y’all. This dude:

Ah yeah. We had the beams in the ceiling to make it make sense. It was functional, and interesting without being trendy. Now we just needed to actually design it … which involves measuring, numbers, drawing … I just fell asleep between measuring and drawing ….

Here was the space that we were living with: 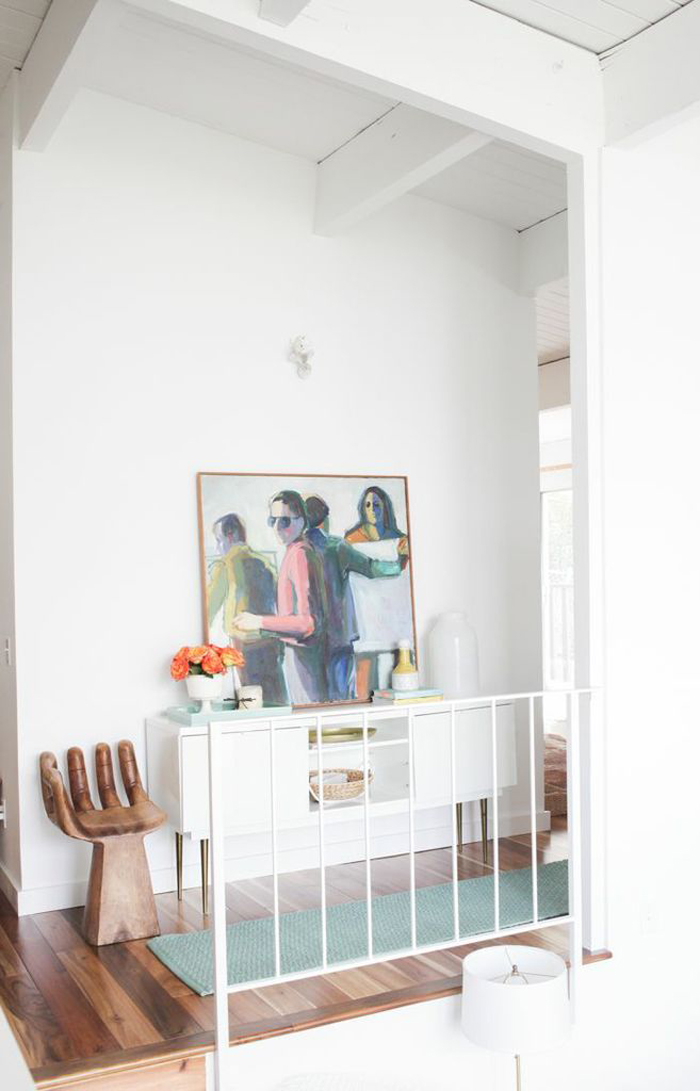 And in case you thought it was easy to design these things it ain’t. It’s just hours and hours of work, playing with numbers, making sure you’ve thought about everything you can, and making sure that it looked as amazing as it could. Ginny started jumping into it and she did a bang up job. It was tricky figuring out what the widths of the fronts should be  – should they be the thickness of the beam? thinner? how much thinner? thin enough that it looks intentional, but thick enough that it holds the space – that wall was big and tall, so It needed to feel proportioned. And then you’ll notice the top left had a weird indention that was just lovely to work with that we didn’t account for at first. Anyway, click through to read the whole process and see the result. 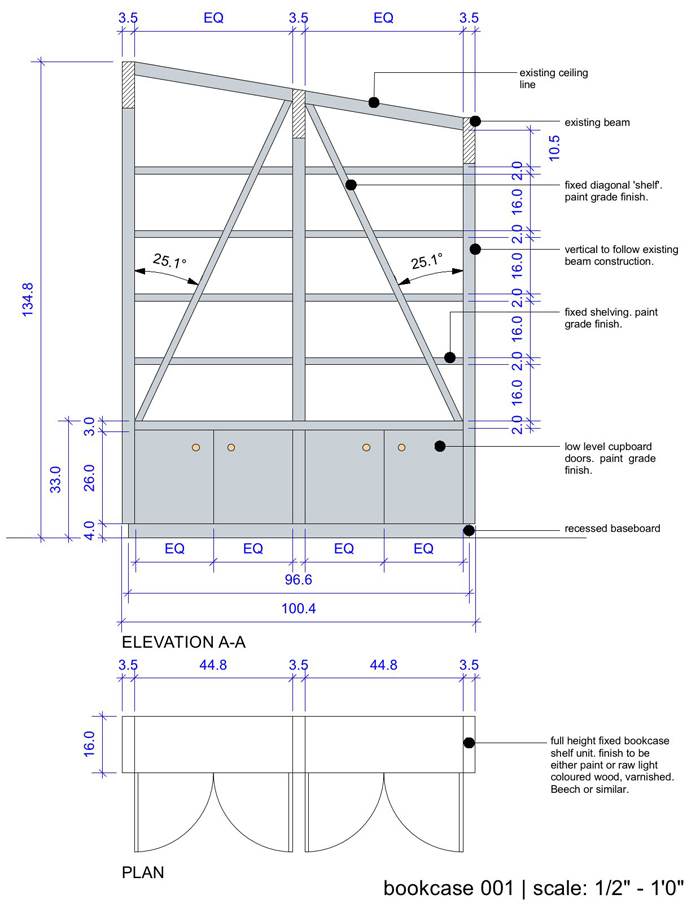 I wanted to do closed storage on the bottom to break it up and of course so little Charlie doesn’t break all my beautiful objects. Once we had that drawing we called up the designer/builder Ramone who does any custom cabinetry/finishes, etc. He came over and did his own measurements, his own drawings and helped us problem solve. 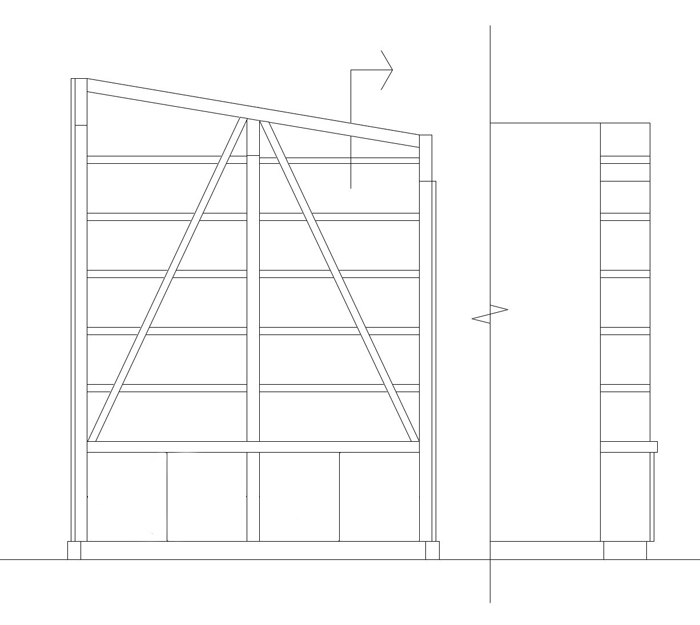 He also did this as an alternative design which was interesting to see but not really what we wanted. 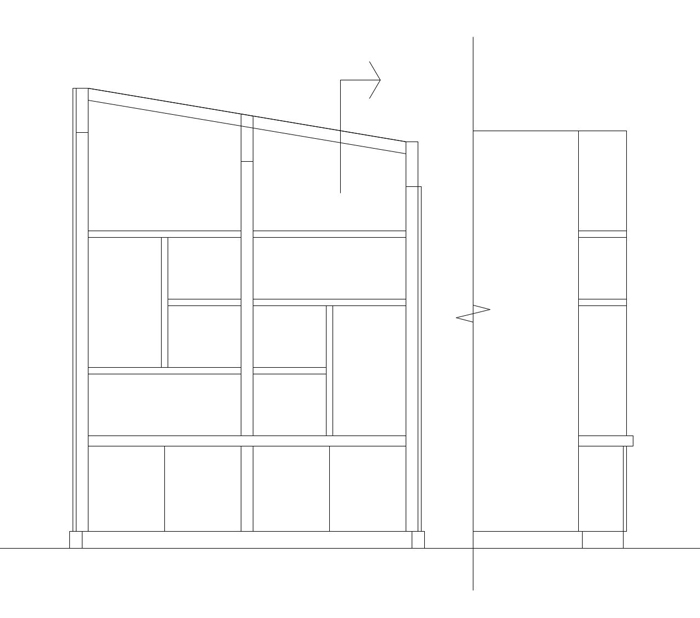 Of course we didn’t realize that the beam actually didn’t intersect exactly in the middle and instead one side was about a foot larger than the other side. So he adjusted the drawings to reflect that and it looks great anyway. Thank goodness. This is one of the first times I’ve hired a REAL professional for myself. Like the real deal. Normally for myself I go the cheap route, but I had worked with Ramone on The Fig House and he did such a great job on the bar there that I felt confidant enough to proceed and I wanted to make sure that it looked BEAUTIFUL. He quoted 5K, which wasn’t surprising to me but you know, a decent amount of dough. Oh and that was the cost before painting it – which he doesn’t do. He’s just the designer/builder. 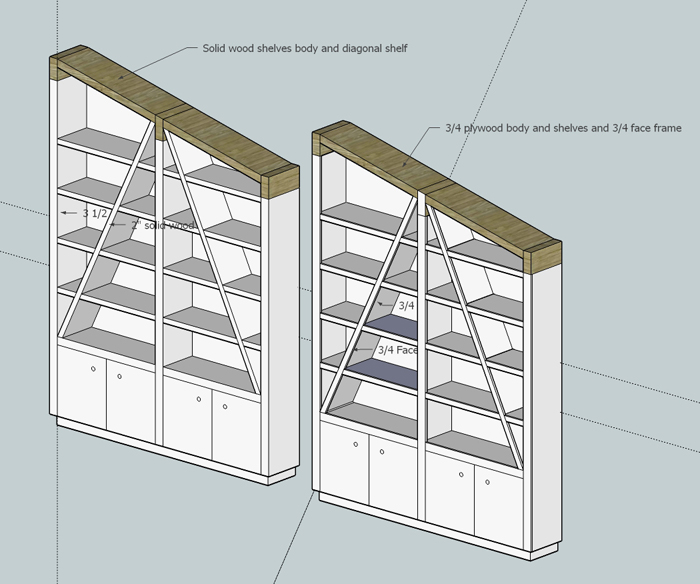 Figuring out the depth of all the wood was the trickiest part. Did we want them all flush on the front? Did we want the outside of the structure and the vertical piece in the middle to be the same and then the shelves recessed? And then did we want the diagonal pieces to come out more than the shelves? It took forever to figure out and what we ended up doing made it look way more custom and high-end. You can see it better in the photos below – but the outside is flush, the shelves are the shallowest and the diagonals come out a big more.

Then there was the question of lighting which of course we needed to figure out before the shelves go up. I thought about sconces but without knowing which sconces they are i couldn’t put them in to the plan as they might not work with where we put the junction box. In a perfect world we would have architectural sconces coming out, lighting up everything in there, but since we were in a rush I just couldn’t pull the trigger. And we could put LED under cabinet lights on every one, but that sounded too contemporary for the house. So instead we created a channel on both sides that chords could run down and get hidden so we can have lamps in the shelves. We will drill a hole that can be hidden in that little triangle and then we put outlets in the cabinets.  That way we have flexibility with the lamps.

Every little measurement had to be thought about  – he even gave us these two options which took me way to long to figure out how they are different: 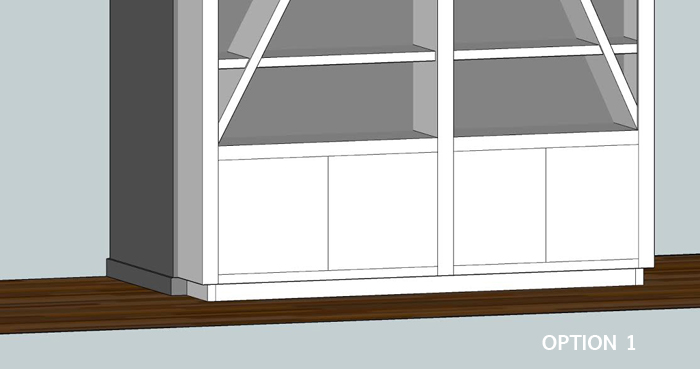 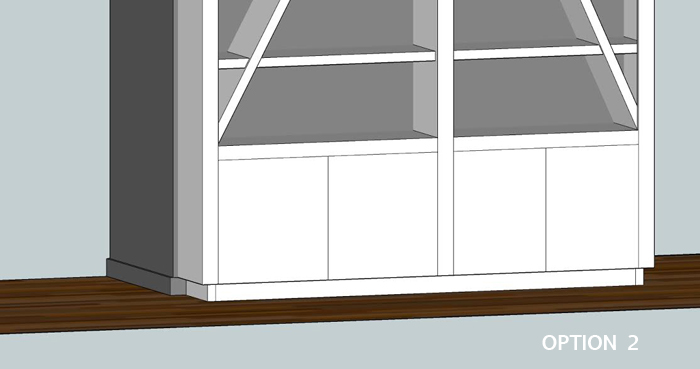 We chose option 2 because its cleaner. So the installation began. They had made most of the cuts in their studio, but not all of them because there are things you can’t account for while installing. Our wall, I guess, bowed out in the middle so the wood wouldn’t sit flush to it. Most cheap carpenters would probably not notice that and then be totally screwed, but Ramone actually carved the same shape out of the wood so that it was FLUSH against the wall. Amazing. 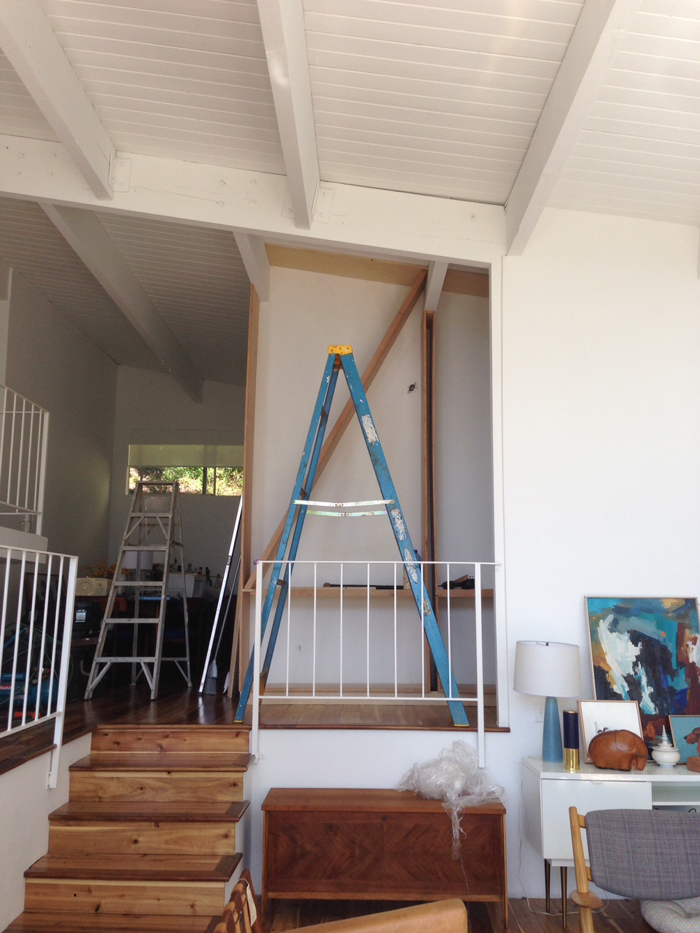 He started building it and it was just very exciting. It was solid wood – I thought it was going to be more plain and ugly paint grade wood but it wasn’t. 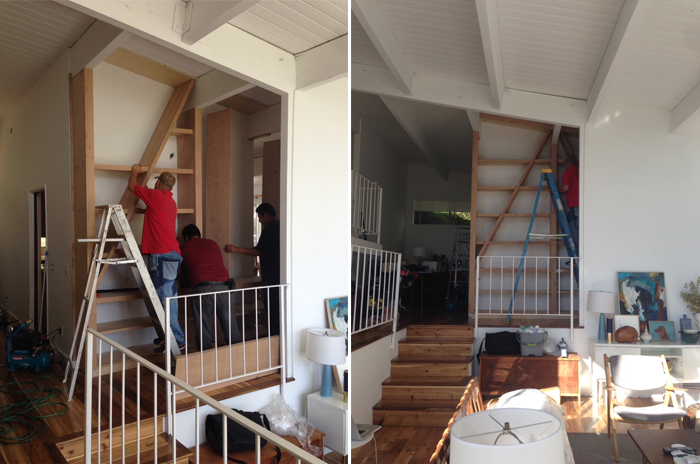 Here it was all finished in the pretty wood. I was EXTREMELY happy about it. So happy in fact that everyone thought we should leave it wood and not paint it white. Yes, you can see the architecture of the shelves really well like this and that’s lovely, but I was really on the fence. Brian (not to blame him at all) REALLY loved all the wood and when Brian really responds to something I try to keep it. So they started the refinishing process.And I was vulnerable, making too many decisions too fast and feeling a bit week in my convictions. It sounds like I just got pressured to lose my virginity. It wasn’t that bad, but If I had a gun to my head and had to choose ‘white’ or ‘stain’ it would have been white. 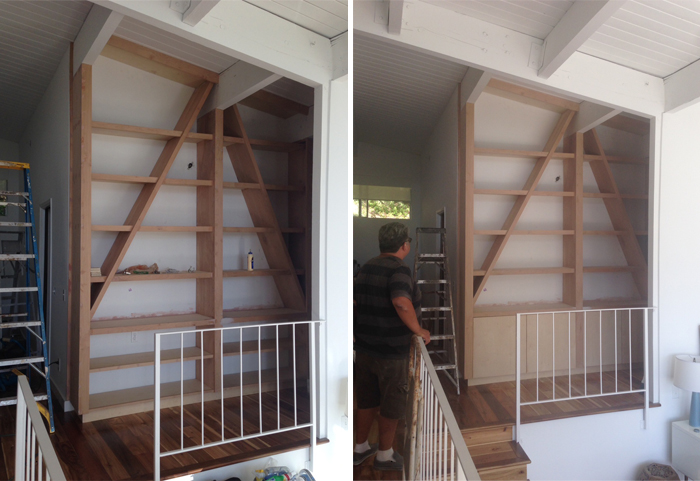 The big problem was that it was prepped for painting not staining meaning that the seams, nail holes, etc were all filled with bando (because its smoother than wood filler) which doesn’t take stain so there would be these spots everywhere that were really light. And you can sand it off, but it was a big job. So it was going to have to be a very expensive refinishing job. I got a quote from my refinisher at $1500 and they started the next day. AHH!! It was tuesday, 6 days before the shoot. Just insane. 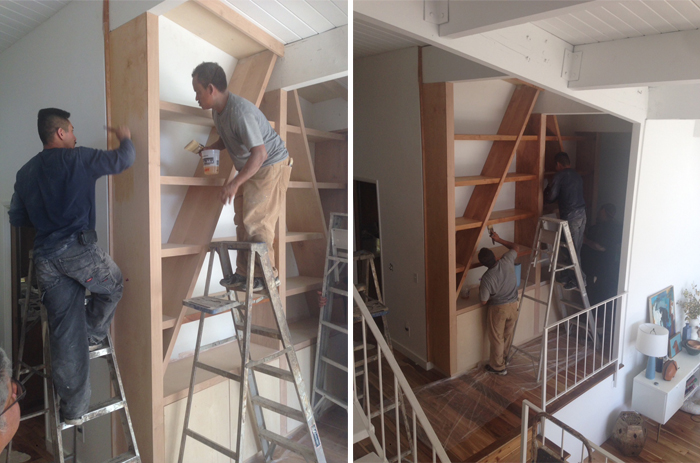 I was very nervous about the decision and started doubting. Hard. It was so beautiful as raw wood but we couldn’t leave it as that because a. there was bando filler all over it and b, they could easily get stained, etc because it was unprotected. So it had to have a sealant and go a tiny big darker to mask all the paint grade finish choices. Ughhhhhhhhhh.

So I came home that night (I think it was 10pm) walked through the door and was like, ‘yah, no, it has to be white.’ I HATE THIS. This was thursday by the way and we had the shoot on monday. I was so annoyed with myself I can’t even tell you, but I KNEW that it just needed to change. It was too heavy. I put some props on it (below) and they got totally lost and I have soooo many pieces that I want to showcase that were going to get lost in this monster of a shelf. Monster. I kept going back to my original intent for the house which is light, airy, open, NOT busy, definitely not ‘heavy’. Heavy was the opposite of what we wanted. So I did a bunch of middle of the night emailing to find a painter because our refinisher doesn’t paint (which I found strange, but he’s a total pro at refinishing and says they are two totally different things). 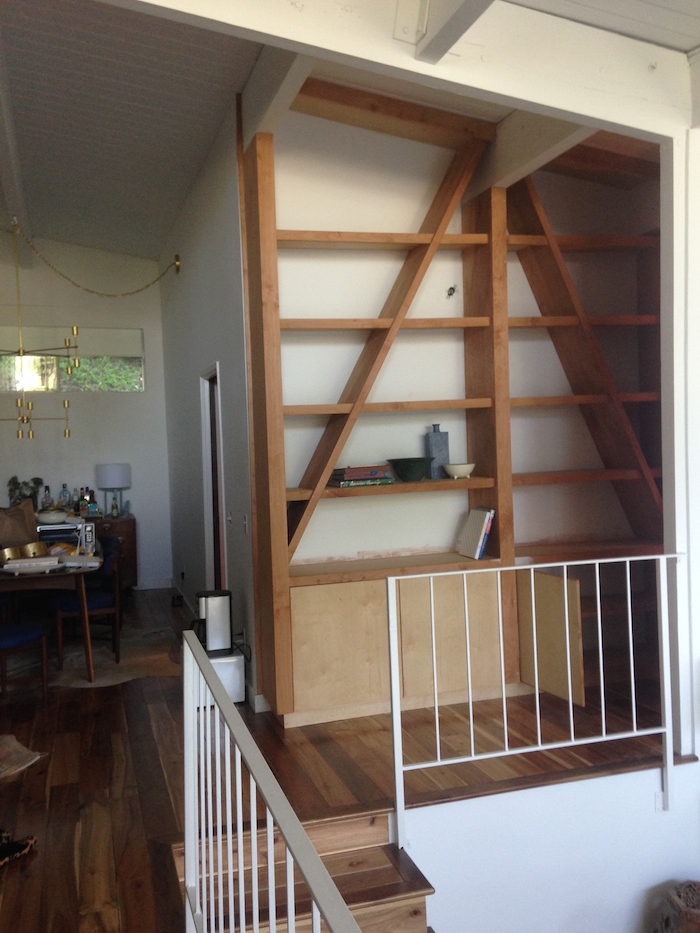 So, I found a couple of dudes that bid on the job. One said $1200 and would take 3 days and one said $300 and would take 1 day. I had worked with both of them before and actually preferred the cheaper dude so I was like SWEET!!! WHEN CAN YOU START????? Especially since I just wasted $1500 on the refinishing that we are painting over. In fact they charged me to sand them down to take off the finish and prep them for painting. It was all a total last-minute nightmare but completely worth it and it only caused everybody in my life hours of anxiety. They couldn’t believe I was changing my mind, they were so annoyed at me. I mean I was so annoyed at me. 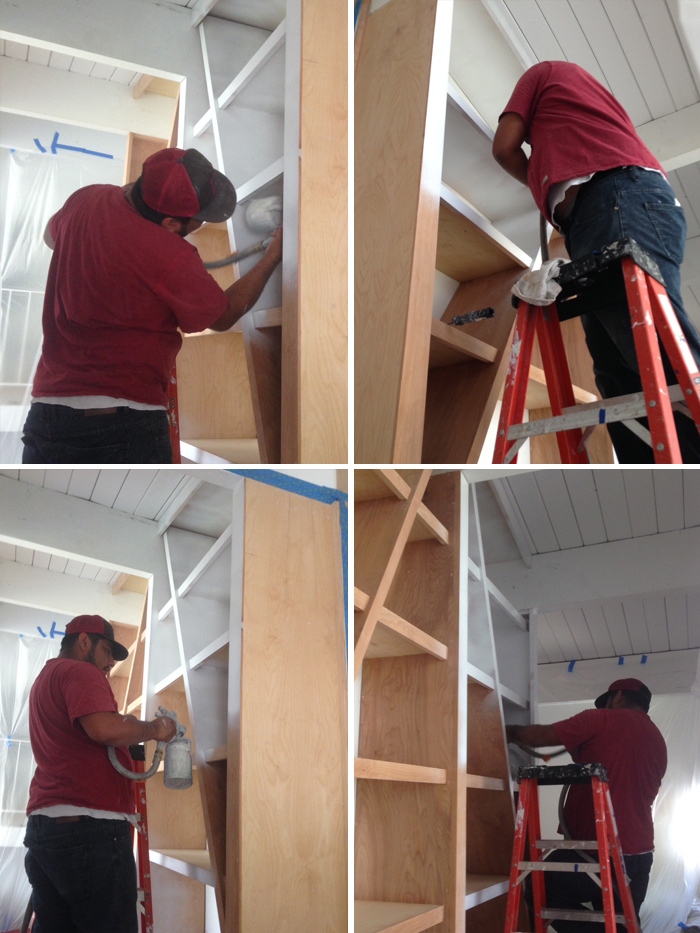 AHHHHH!!!!! So, much better. I was VERY, VERY, VERY excited, relieved, happy, proud … just all positive feeling. Here is the lesson learned –

Be flexible with results, but just make sure that the choices you make don’t stray too far from the original intent. The intent was open, light and airy – and this shelf just really made it feel heavy. I shouldn’t have doubted myself but I did and that cost me $1800. That sucks, folks, obviously but I’m very glad I painted them white.

So want to see it start to almost finish? Here you go folks!

And seeing it white and empty makes my heart so happy. 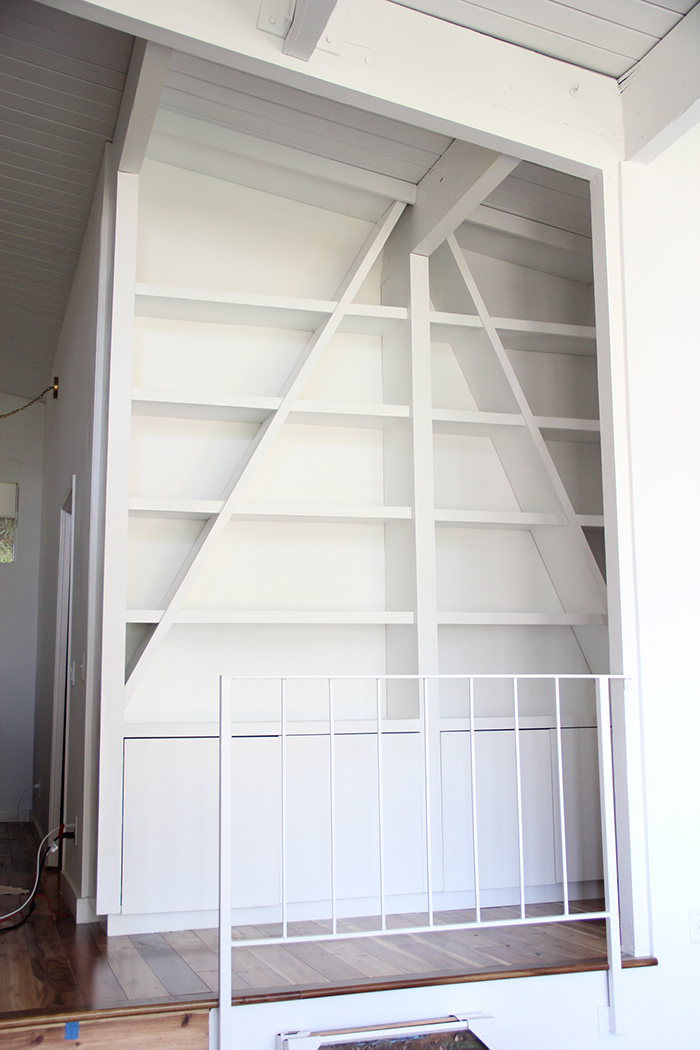 I’m just so into this bookshelf and I’m so happy that I forced us to do it. It was expensive, but I think worth every penny. And now that we have everything on it, it just makes the house so much more inviting and warm – and YET not too cluttered since most of the accessories and contained up there.

WHEW. What do you guys think?

If you guys are in LA and need a great cabinet builder, check out Ramon’s workshop. I was totally impressed with him and no, he didn’t give me a discount for saying that, he was just that impressive.