Snookie is a mother. “Friday Night Lights” is not coming back. Roman shades are expensive. These are all universal truths we just have to accept as a person in this world, and it’s hard. Why, oh why are roman shades so flipping expensive you ask? Yeah, I’ve asked that question a million times and the answer is always this:

“To make a roman shade precisely and long-lasting, pull after pull for years, is VERY detail oriented and labor intensive” … and therefore expensive.

Once you accept that fact, life gets way easier, your daily stress level will go down, and you’ll save a lot of money on your psychiatrist’s bill because like me I’m sure you are sitting in your shrink’s office shaking your head and mumbling ‘Why, Doc, oh why are roman shades so expensive? WHY?”

But the thing is that Roman shades are kinda the best because they are modern and sophisticated and super functional. They keep the room feeling light. So here are your options:

1. Ready-made Roman shades from big box stores or online. I highly recommend that you don’t order from somewhere random because you’ll have no recourse for returning if and when they break. Because with Roman shades, you get what you pay for and often the cheaper ones break with a lot of use. BUT at the same time, sometimes buying that $70 shade makes you happy for the two years it lasts, so it might be worth the purchase even if it’s not going to last forever. 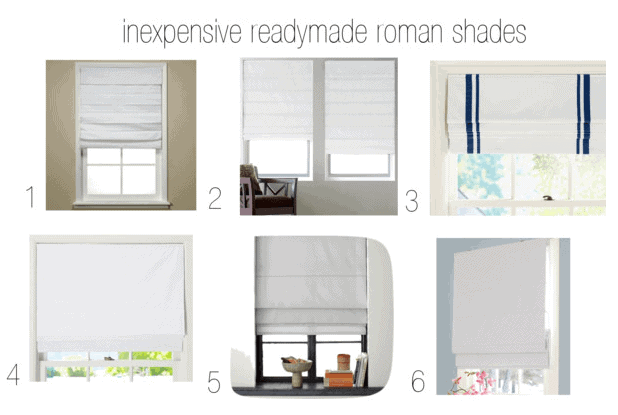 1. Bed Bath and Beyond. Even the picture kinda looks shoddy, but they could be good in person. I haven’t tried them, but the good news is that BBB has a very flexible return policy so if it looks not so awesome or breaks quickly, at least you can return it. Meanwhile, you’ll have only spent $49 – $99 so that’s not a crazy investment and might be a good risk if that’s within your budget. But I wouldn’t use them anywhere “high use.” For instance, in my office I pull the shades up in the morning, down at 3pm when the sun is blaring, up after sunset, and down for night time. That’s a lot of use. So if these were cheap, they would break pretty quickly unless you are a very ginger puller.

2. JCPenny. Again, I haven’t purchased these myself, but they are a very inexpensive ready-made option with the return option. They range from $30 – $55. This is a pretty good option for a bathroom or a window that won’t have a ton of use. Think guest room or kitchen — somewhere where it is normally up or down because at this price I can’t imagine it will last for seven years.

3 and 4. Pottery Barn Kids. I used these at the lake house and they are pretty great. They have blackout lining so that’s awesome, and are mid-range in price ($149 – $229) with lots of fabric options. I liked these when I used them AND if they break you can take them back to Pottery Barn. I would think they would at least replace them for you.

6. Country Curtains.  I’ve used these now for three clients. I like them. They are a good, simple mid-range option. They aren’t super beautiful, but they’re functional and quiet. Out of the 13 that I’ve ordered, we’ve only had to send back one of them to be replaced, and they replaced them pretty quickly. They range from $69 – $199. The main bummer is that the white is the only good color option — the other two are sage and brown. But for white ones, I do recommend them.

So the next option you have is custom Roman shades, which will start to run you about $300 – $1, 000 a piece. Yes, that is a pretty 14-carat gold penny. But custom anything is expensive, and again, you get what you pay for. My philosophy is if you are going to go custom, go with a company that is reputable, has great custom service, and is lifetime guaranteed. You might have some local decorator resource in your town that can come out, measure, and advise you, which I highly recommend. For my office I went with The Shade Store, and I was very happy with them. They had a ton of beautiful fabrics to choose from, tons of options to choose from, and it came fast and was super easy to install. 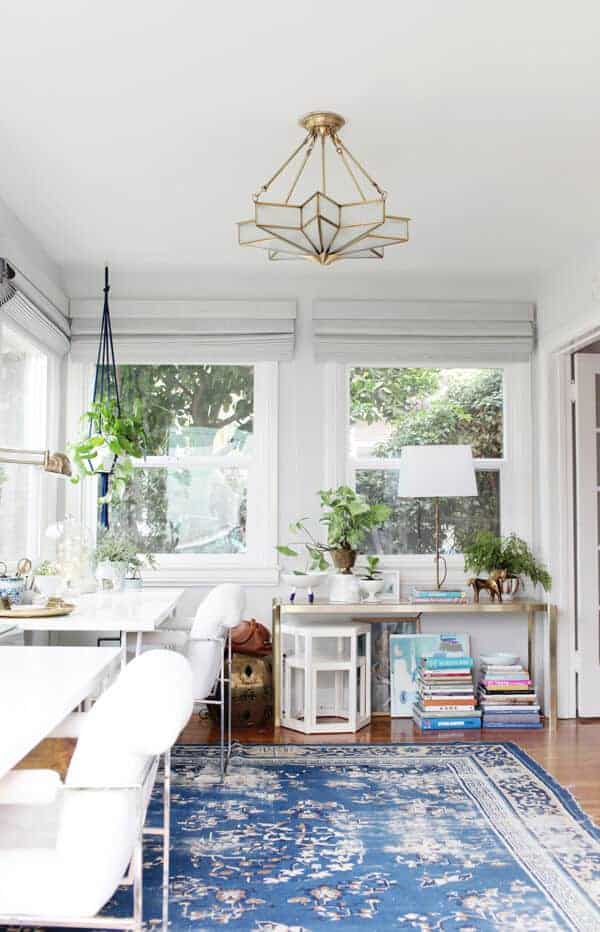 I chose the box valance at the top to make them look more high end. I chose an outside mount so it didn’t block any of the window and instead make the windows look even taller. I chose flat panel so when they are down they are totally flat, which looks more modern, less traditional than one that is pleated.

So below are all the different popular styles you can choose from: 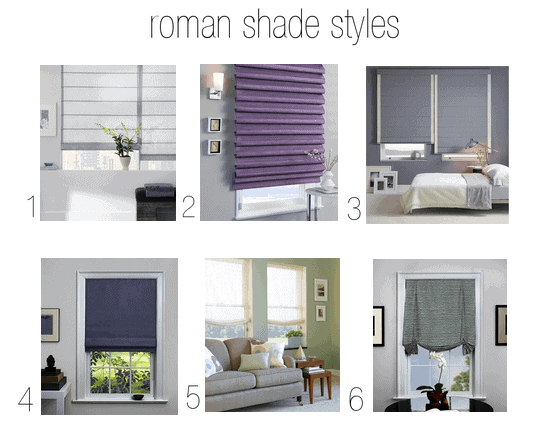 1. Aventura Roman Shade. I like these, I do. They kinda have a Japanese feel to them. The horizontal stripes add texture, just make sure your room can handle that extra busy-ness.

2. Pleated Roman Shade. I love these for a more traditional look. I used these in a client’s house, and they look beautiful, elegant, and romantic, but not dowdy — if you keep the fabric more modern and simple. AKA, a frilly pattern in these shades can go more grandma, so stick to a simple linen or raw silk.

3. Cascade Roman Shade. This style is a mix between the Aventura and the flat panel, which a softer horizontal seam.

4. Flat Panel Roman Shade. This is the most modern and simple. I prefer these as outside mounts so they don’t disappear so much at the top of the window. Instead, they make a statement above the top of the window. Otherwise, it’s too simple for the amount of money you’ll pay. If you go custom, stay away from anything that looks too ready-made.

5. Relaxed Roman Shade. For the romantic or the Tuscan villa.

6. Tulip Roman Shade. Can be so cute in a girl’s bedroom or pretty powder room, but it’s definitely not for the bachelor pad.  I want it for my cabin in South Carolina, in navy linen. And just because it’s frilly doesn’t mean it’s old fashioned.

Now before you get all “what about Etsy” on me, I’ll just say that I’ve ordered from Etsy twice and both times I’ve been kinda unsatisfied with what I got. One time I had to get rid of the shades and eat the cost of the fabric ($140), although I got the cost of the labor returned to me. The lines weren’t straight and the seams were crooked. If you have your own fabric and it’s a pattern and it’s for yourself on a window you don’t use that much, then it might be OK and a good way to save money. But if you want a standard fabric, it’s for a client, on a high use window, then know you’re taking a risk.

I would LOVE some Etsy recommendations, though. If there is an Etsy company that is selling good quality Romans at a reasonable cost, then please tell me, I’d love to know. Until then I’m going with a lifetime guarantee like The Shade Store or ready-made for my less important rooms.

Ultimately, here is my Roman shade philosophy: Pay for what you can afford. I’m not going to sit here and tell you that $500 a shade is where you should splurge in your life. Don’t save up five years to get Roman shades in your family room; it’s simply not a very sexy $2, 000 purchase. But I will say that if that’s what you can afford, then it will be worth it and you won’t regret it.  Don’t pay for it you can’t afford it, but do if you can. Sounds obvious, I know, but it’s the only way it really makes sense.

Any and all Roman recommendations are welcome. I can only vouch for what I’ve used before, but I’m sure the world would be grateful for even more secrets, resources, and tips. Let ‘er rip.

64 Comments
Oldest
Newest Most Voted
Inline Feedbacks
View all comments
Our sites use cookies to improve your experience. Learn more