Let’s go behind the scenes of a magazine shoot, shall we? Last week when I posted the Studio City Makeover shoot for HGTV Magazine a reader asked, “What happens to the props that you bring to the house for a shoot? Do they stay there or do you take everything back?” Excellent question. Ready for a 1300 word answer?

Or maybe just a two word answer: it depends.

If it’s for a magazine where we are featuring a house designed by someone else (not me or the stylist) normally the magazine wants to art direct it and make it, say, “less serious, ” “more colorful, ” or “not so designed.” So even if the homeowner/designer has great stuff, the magazine might want to change it out a bit just for the shoot. Most of the time designers don’t fully have the budget (or clients don’t want to pay them for their time) to do “the final layer” as I put it and yes, it just needs accessories and styling. It needs that layer of personality through accessories and art.

Often we’ll replace club chairs, rugs, or art if it’s not the right vibe. For magazines you bring in A TON of books, plants, art, lighting, vessels, objects, pillows, throws, frames, and yes, even food. The amount of pretty glass (and often French) water bottles that I’ve purchased is uncountable. Or lemons — but not just any lemons. Lemons with leaves on them. Learn this, future stylists, everything in a more natural state looks better — chunky rustic loafs of bread, a bowl of fruit with their leaves on, when the leaves ever so naturally fall over the lip of the beautifully hand-thrown bowl. Hell, you even want the water carafe or jug of juice to be either 1/3 full or 2/3 full, NOT 1/2 full (HA) and certainly not all the way full. That’s not “natural.”  2/3 is my personal favorite, so yes, I’ll pour it out to be that full. Totally nuts.

Stylists rent most of the props from prop houses or design stores. If you are shooting in New York you’ll rent from amazing prop houses (Lost and Found, The Prop Company) that charge what seems like a lot, but the service they provide is priceless (which I didn’t realize until I moved to LA and there are just buildings full of garbage calling themselves “prop houses”). How much exactly? Often close to the retail price, which seems crazy, right? But think about doing an entertaining story and renting six glasses, six plates, six bowls, etc, and then three different sets as options of those things.

Not only is it crazy convenient and saves you hours, nay, DAYS, to get them all from the same place, but you can also see how they look together, edit them, add to them, take photos, etc, but the rental places have to wrap everything VERY carefully and then unwrap them when they come back (often one week rental) and store them year round. So yes, they are crazy expensive, but worth it because they are taking the financial risk of inventory and they provide that service. I’m not sure why I am all of a sudden a major advocate for prop houses, but since I’ve started selling, I realize how much more goes into having a furniture/prop business. 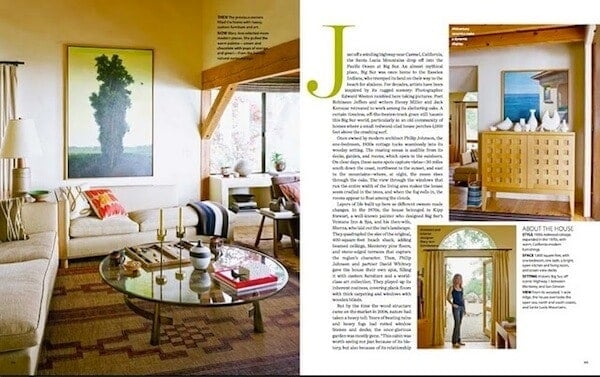 There are pretty much no prop houses anywhere but New York (I don’t know about SF). I mean, OF COURSE, LA has them, it’s Hollywood, but they are full of ’90s sofas or baroque (and bAroke) furniture, and drawers of “spoons” instead of spoons. It’s all props for movie sets where you aren’t necessarily needing that perfect hemstitched linen napkin, or that hand-blown slightly blue water glass. You want a mid-century sofa? Sure. But don’t expect it to be particularly special or cheap. A sofa is normally around $300 to rent, by the way.

But you can also rent from most home furnishing stores. In LA they are called “studio rentals, ” left over from Hollywood studio days. They are normally 15 percent to 30 percent of the retail price, and normally just for three days. The smart stores do this (it’s free money), the scared stores don’t because, yes things get damaged, and it causes a big old pain in the arse.

Of course you can’t rent from big box stores, so, uh … yeah … you buy and return, BUT BUT BUT BUT, A) they get credit in the publication and B) I ALWAYS try to keep at least 30 percent of the receipt total, even if I’m going out of pocket. Cindy taught me early on that it’s just kinda rude to use them just because they have good customer service. If I have time to plan (ha) I’ll email my PR contacts at the company and ask for pieces, and if they are interested they’ll send them and we’ll send back afterward (unless we open and use, say, dishes). But there are times when I’m just cruising by an Anthropologie or West Elm the night before a shoot and yeah, I buy $300 worth of things that no, I don’t intend on keeping, and YES I bring back $200 of them. I feel like I’m at some sort of confessional right now. Like I’m purging my styling sins. Please don’t take advantage of the system and instead try to keep something. PLEASE.

Often smaller design stores will let you borrow items for a shoot if it’s for a publication or a big blog. This is just for the shoot, you have to bring it right back and credit the hell out of them. For a company to get an item in a magazine or featured in a big blog is a big “get” for them and it’s so good for their marketing and PR. It’s free advertising, basically. In fact, I was at a local LA design store the other day and I asked to borrow a blanket for a few hours for a shoot to feature on my blog and they said “We don’t do that.” I wanted to get all Julia-Roberts-in-Pretty-Woman-Big-Mistake on them. But then I checked myself, slapped myself emotionally on the face, and chanted “Stay grounded you self important ‘blogger’, ” which tends to work. Anyway.

But that doesn’t answer your question: what happens to the props after a shoot?

Well, if they are rented or borrowed they are returned to the prop house or store. If they are purchased but can’t be returned, then the magazine and the stylist “take care of it” in which case the editors or stylist kinda divvy it up. Obviously this is a massive perk. The amount of times I’ve answer the question, “Where’d you get this?” with a “It was left over from a shoot” is countless. Some magazines (Martha Stewart) have a prop house and they are crazy anal about every single toothpick being inventoried, but many know that storing and maintaining that prop house is actually more expensive than the props themselves so most magazines don’t do it.

BUT, I’m in an interesting position where I’m designing the house, with real homeowners involved, and styling the shoots. So it’s my goal to style and shoot it with everything they like and with pieces they can keep. Then, essentially, they “shop the shoot” and kinda buy everything they want and it stays in the exact place that I styled it in. It’s not like I get them all their furniture, then for the shoot I bring in all these amazing accessories that they can’t actually have. That would be mean.

… Well, actually, I have. I had one client once that couldn’t spend one more dollar and needed so many accessories. I still needed to shoot their place for my blog so I brought in accessories, moved things from room to room so it felt “full” and “finished, ” and yes, took it all with me before they even saw them. That is not ideal. But I wasn’t going to shoot an unfinished space nor was I going to not shoot it because I made so little off of the project that at least I needed to get blog content. I digress. This glass of wine sure is making me chatty …

With Bri’s house, Ian’s house, Rachna’s house and well, most of the houses, they keep as much as they want and it’s normally 90 percent of the pieces. Rachna’s husband wasn’t psyched about a piece of art that I brought for the shoot so of course I took it with me instead of charging them for it. In a bedroom shoot last week (stay tuned) we could NOT find the right throw for the end of the bed so we borrowed a $500 blanket that we never had the intention of keeping. We accidentally left it styled on the bed and I went back that night to get it and the homeowners WHO LOVED IT were so bummed it was $500 and I felt terrible.

So there are cases when they are removed, but for the most part I try to buy things they love and can afford, and they buy them from me after the shoot. It is SOOO much easier than getting approval for each individual accessory, trying to tell them where it’s going to go, what it’s going to go next to, why it works, etc. I love to just style it how I love it and hopefully they love it too and buy everything.

I’m on word count #1257. That’s a lot of words to answer that question. But it’s clearly not a simple answer.