Time for another before and after post; master bedroom edition. The master bedroom was a huge sell for the house. Its big, bright, spacious with huge windows and access to a pretty massive deck. I was just so happy that it existed. Not a bad start, folks and not much to complain about. But naturally there was still a lot I wanted to do …

Here’s where we started: 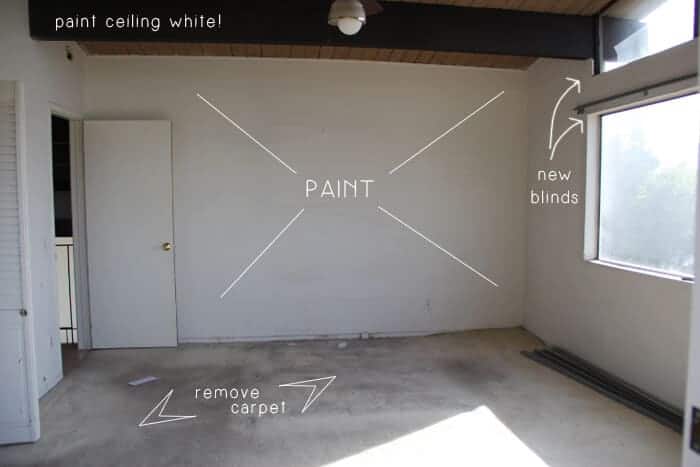 At this point you know that we replaced the carpet in the whole house with fresh wood flooring from Build Direct (Yes we are still working on writing how to choose hardwood flooring post, but for now check out what we bought HERE). That was a no brainer. And you probably remember that we had to skim coat all the walls in the whole house to get rid of this crazy texture:

I tried and tried to get my mind around why thick plaster walls and orange peel are a problem and I think it’s because they tend to be sloppily done where it looks really fake. And then obviously this house is a mid-century modern house, so it’s just so inappropriate. This house, like my neglected legs, wants to be smooth. We aren’t in a spanish castle. 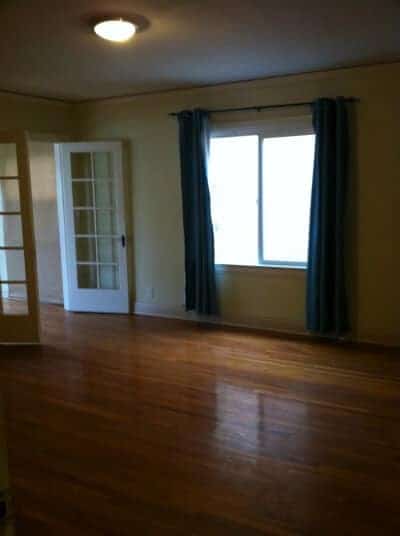 The fan is ugly but I have to say that I might be pro-ceiling fan these days. I apologize to all of those who live in the rest of the country with “seasons” where its “cold” and “snows” but here in La la land, we still have 70 – 80 degree January days and it gets HOT up in here. It doesn’t help that we removed the window film, but I’m a sucker for natural light and I insisted that it flood in. But to combat the heat I’ve ordered blackout romans from Decorview that have a duel function so that during the day, when the sun is streaking through, it can filter that light, too. They are being installed in a couple of weeks and I’m VERY excited. For now we are using temper paper to combat the early morning light, which is so beautiful but so tortuous these days.

You are probably going to ask what we are going to do for the top windows which are angled and therefore the options for them are not awesome. After debating for HOURS what to do we decided on these hunter douglas sheer honeycomb shades that can be made in that shape. It’s not 100% ideal, but that sun must be blocked and there were no other options. I actually think its going to look fine, quiet and modern, but it was a hard decision. I promise I’ll give you more on that, but I it needs its own post. 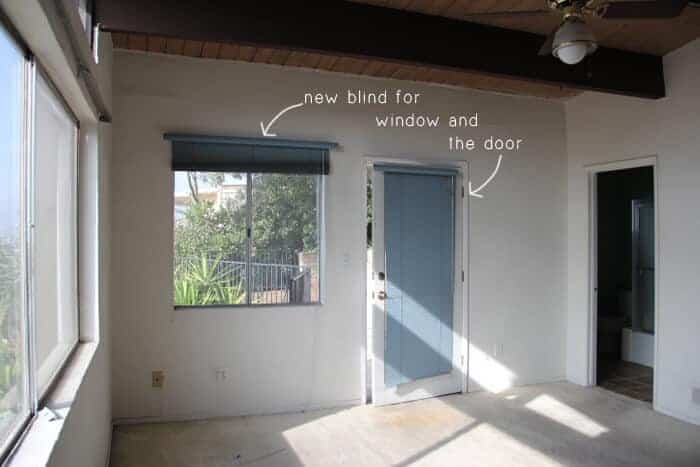 New window treatments all around coming at you. And by you I mean me. The dresser will go under the window and my summer parties will go on out that door (deck info coming up soon). 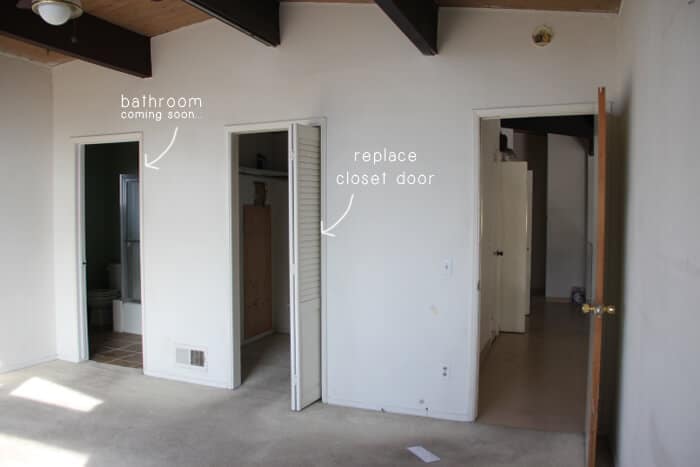 The bathroom redo is yet to come – meeting with my contractor tomorrow actually to start the process. And the closet needs help but thank god I’ve hired Beth from BNeato to do it all up – post to come. 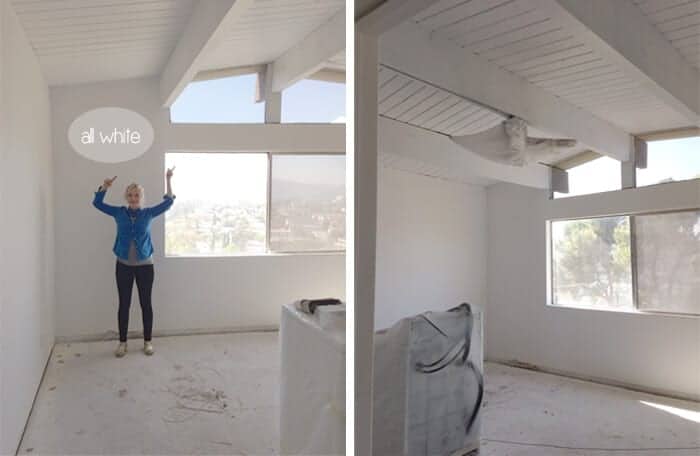 Painting the walls and ceilings made a MASSIVE difference. We used Benjamin Moore Super White which is basically the whitest white you can get without going cold. Behr ‘ultra bright white’ is good, too, and honestly most paint companies have one really bright white that has no pigment at all in it. So while I do love Benjamin Moore, I think that many less expensive brands could work for such a simple color, too.

I about wept with joy when I walked into that space. There are times, my friends, when this room is almost too bright and that makes me VERY happy to write. Seems impossible, I know. (which is why we ordered the dual shades – black outs and day time filter). Meanwhile in that photo above you can see the difference between the window that has the film still on it (on the right) and the one that doesn’t (on the left). Crazy, right? Again to have it all removed and all those windows washed it was $600, which took two full days. 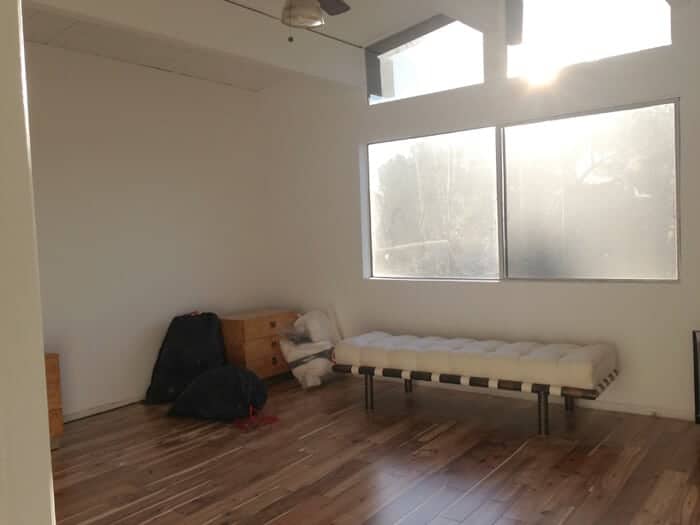 Here we are with the flooring replaced, and it’s just so beautiful. We have yet to put backboards in this photo (and right now we have only done them 1/2 the house … silly baby kinda halted those nail gun plans). 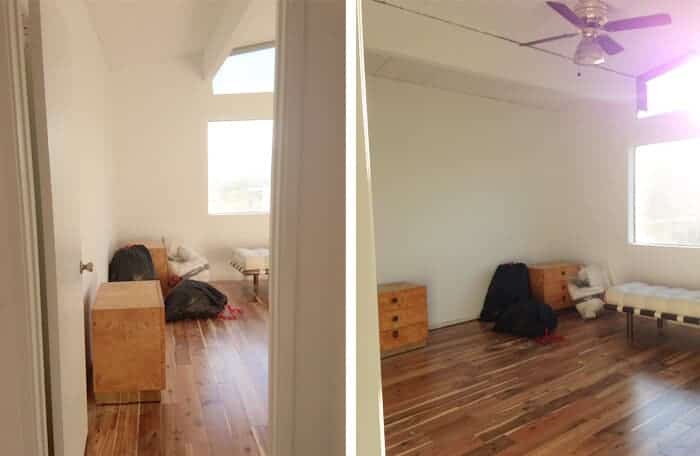 This was the day that we moved in. I can’t tell you what happiness I felt moving into a clean white box. I’ve never had a bedroom I’ve been psyched about going into. NEVER. But I tell you, with this pretty light and my crazy blue headboard, all I need is some white bedding and we could call it a day.

Here are some sneak peeks into the bedroom a month ago. Since these shots I’ve gotten new night stands and lamps, but it hasn’t changed too much beyond that. This room is actually probably the easiest room to do because I don’t want too much. I’m searching for the right piece of art above the bed, and can’t wait for the window treatments but really Its going to be a very simple room. 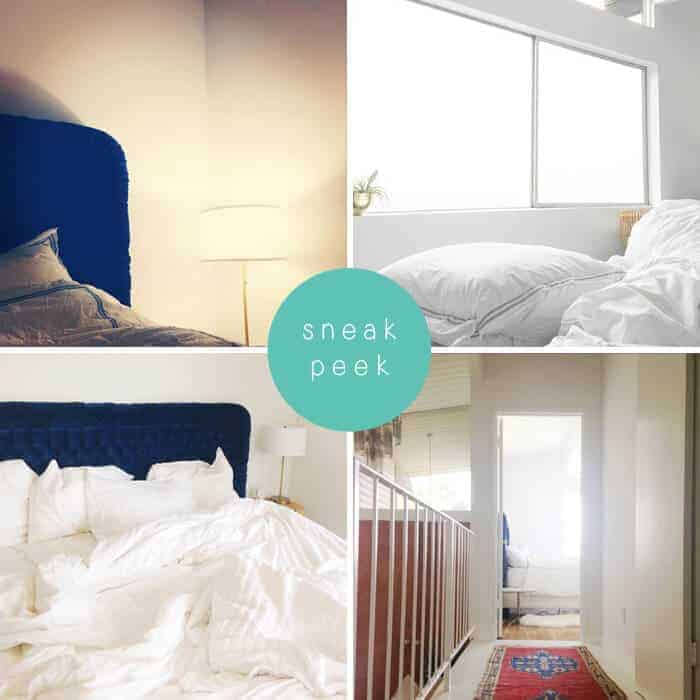 For the bedroom, like the rest of the house, I want it to be that combo between calm, quiet and relaxed and yet with enough style that I’m not living in a white box. ‘Relaxed with a side of weird’. Here are some of my inspiration pics that we threw together. It’s not there yet, but I’m loving the direction it’s headed in. 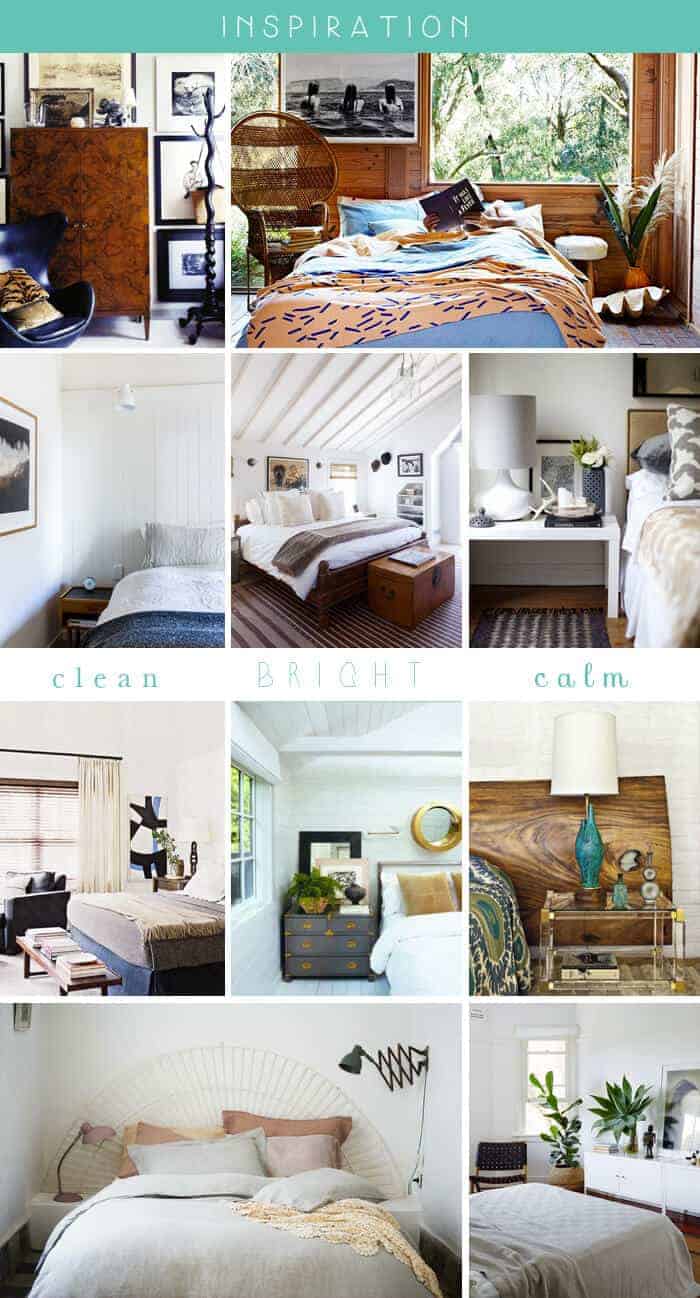 I’m on the search for bedding that doesn’t wrinkle really bad but is really soft (and no, i don’t really care if its 100% cotton, i’m so sick of my pillows sham flanges being so wrinkled that you can’t even iron them flat. They look dirty and used even when they aren’t. Unacceptable. I might go back to my favorite linen duvets but Brian isn’t the biggest fan of linen (even though I am). Can anybody recommend some decent soft white sheets that don’t wrinkle too much?

That’s my linen rant for the day.

Oh and i’m getting this rug  (the white quilted hyde rug in the middle below) which I’ve been obsessed with ever since I used it in The Lake House. You literally can’t believe how pretty it is in person. It reflects the light so beautifully AND its indestructable. I mean, if I tried I of all people could probably do some damage but I figured since its the only doorway to the outside patio we needed a rug that could withstand some wear

Meanwhile, going to sleep in this here bed is just a dream. Pun intended.