When I first walked into this house I thought, ‘No way. We’ll never get it’.  Obviously it wasn’t this amazing case study house from the 60’s or some sort of architectural gem, but the amount of light and how spacious it felt (because of the layout and the high ceilings) was exactly what I had dreamt of and thought was impossible for our budget. I think that most people didn’t want it because it looked like this (below) and there was a lot to do, but I made the big list of ‘what we would need to do before we can live here’ in my head and it wasn’t that daunting, so we put in an offer.

If you want a trick to actually buying a house in this insane ‘cash-only-100k-over-asking’ market – go for a neighborhood slightly less sexy (Glendale) and a fixer upper house that is slightly more expensive than what the stupid real estate investors want to pay cash for because they worry they won’t make enough dough after flipping it (Also you should work with my husband, Brian, who can find strangely good deals). Those real estate investors didn’t have the vision, but we did.

So, here were the things we needed to do before we moved in (to see the entire house before and general design plan go HERE): 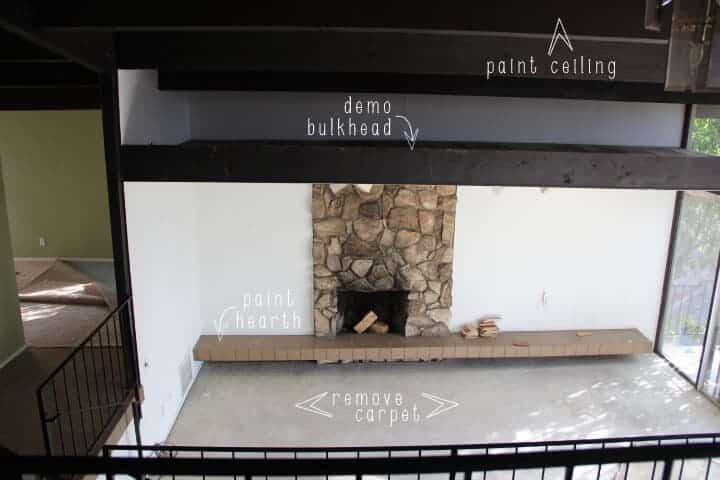 The house, built in 1964, had clearly never been updated. And frankly it’s not a super expensive house in the first place – the finishes were ok, but not expensive, so these finishings + 50 years is extra not awesome. Disgusting, actually.

1. The carpet had to go – Which Brian and friends did himself so cost zero.

2. The hearth and fireplace are not the worst I’ve ever seen but it was a missed opportunity for something amazing. So we decided to paint the bench part of it and sit with the rest of it til we figure out the perfect plan.

4. The ceiling was painted brown, not stained wood. So before you turn me into the house integrity police, know that had the wood on the ceiling been beautiful and rich, we would have absolutely kept it. In fact this was the only thing that Brian and I actually got into a fight about. And you know who you shouldn’t fight with about design decisions? A 6 month pregnant, 34-year-old interior designer who finally gets to design her first house. He didn’t stand an icebergs’ chance in a vintage fireplace. He was going to lose and he did. 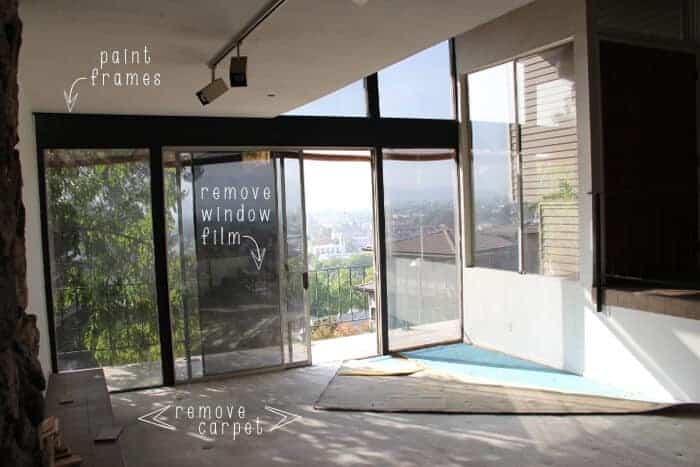 5. Film on windows: The windows are amazing and the light was good … when we opened the sliding glass doors. But the previous owners (or maybe the original owners, I’m not sure) put a film on them that basically took the amount of light down by at least 20 percent. I didn’t realize it until one day when I started picking at something on the windows and I realized it was a film and I about wept with excitement – and that was the PG rated version. I thought that someday I was going to have replace all the windows, but no, all I had to do was hire a dude to spend about 16 hours to remove two layers of film and wash all the windows ($600). 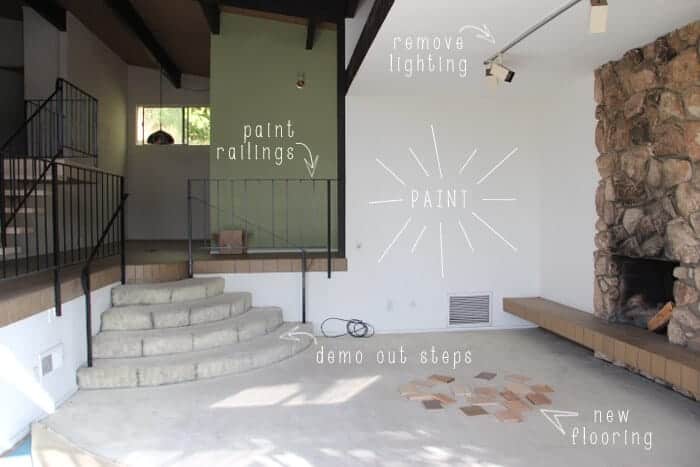 6. Paint the railings and cement floor: The railing was black and prison-like, and just so busy, so that had to go white as well. All the painting was done by the same contractor and was quoted together, but I think just painting the railing was $1500.

7. Demo Stairs. The stairs were going to not be carpeting anymore, obviously so they needed to get demoed out (trying to configure wood flooring in that round shape was not going to happen in an attractive way. Demo + new stairs = $1200

8. Skim coat and paint walls: The walls in the entire house had a HUGE coat of the thickest most disgusting layer of orange peel that was also cracking and peeling and just overall falling apart. It was so textured, but also so damaged. So we had to skim coat the entire house which was such a bummer. It was sooo expensive (13K including skim coat, patching and painting of all walls, ceilings, railings, cement floor and bench) and took 3 weeks. But as you may or may not see in the after pics it was absolutely 100% worth it. In a perfect world we would have done it ourselves, but I was 8 months pregnant and Brian was working a ton so that wasn’t an option. Plus we don’t really know how to do a great job – so it would have been just a really bad situation. Putting it off wasn’t really an option either because we would have to move out completely for weeks, so it was now or never. And I knew that It would have driven me crazy for years and years if we didn’t do it. The texture on those walls was nightmare inducing.

So here’s the progress: 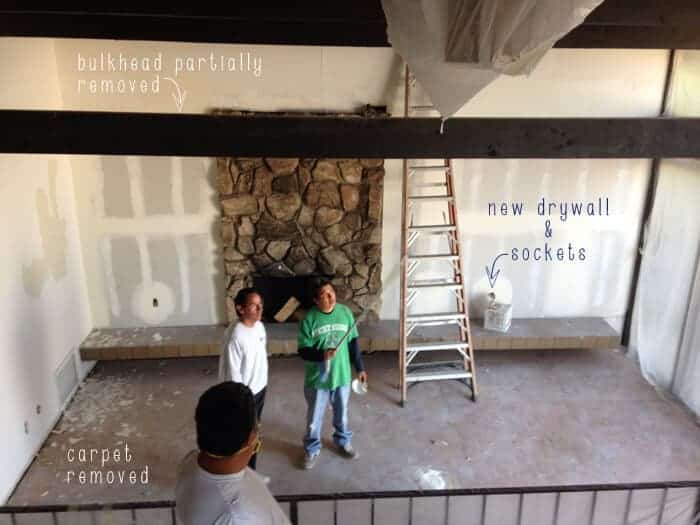 The false ceiling was removed, but the beam was still there. The walls had been skim-coated and new drywall (with junction boxes behind it just in case we want sconces at some point) with new sockets (there were none previously on that wall) and carpet removed. By the way you know what is a big hidden cost of a renovation? Removal of garbage. I think we’ve spent now around $1200 getting the carpet, the demoed out tile, dry wall, etc. We had to hire two different crews, two times, to come and schlep everything from this floor down to a dump truck. 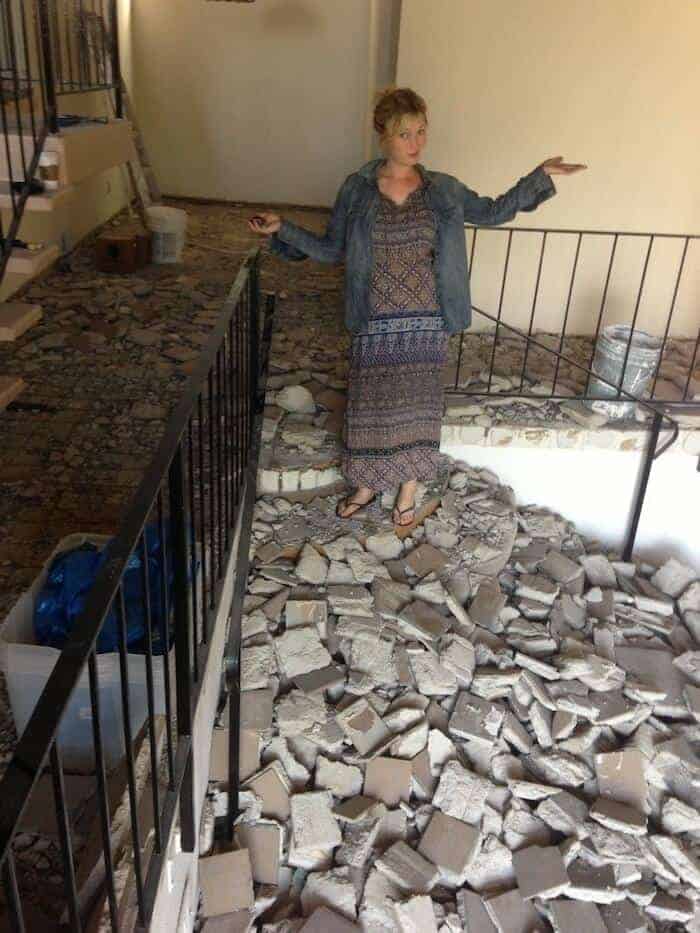 You wanna know my favorite thing in the world that ever happened? More favorite than when Juan Pablo told crazy Victoria to go home last night? 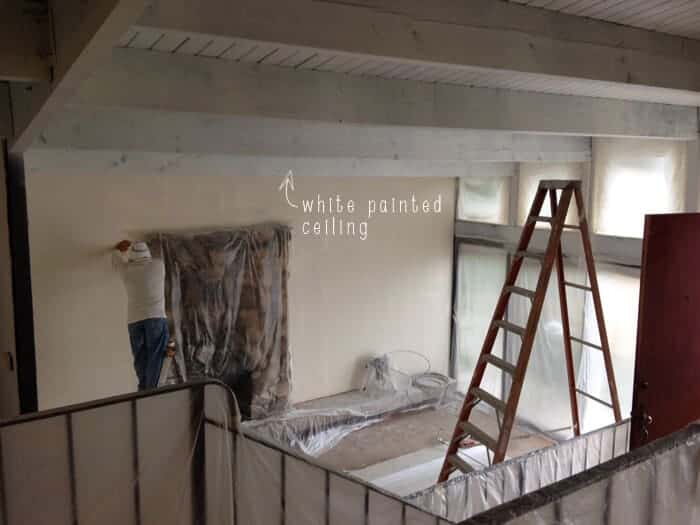 When we painted the ceiling white. My god, that was a satisfying fix. It took a long time (like 4 coats) and it was expensive, but nothing makes a space look bigger more than painting a dark ceiling white. I highly recommend it. We received many quotes and went with the paint contractor who had never failed me and I have to say, even though he was slightly more expensive he did SUCH A good job (the cheaper quote we got was only $500 less and seemed like could be more than a $500 risk). We had that cheaper paint my office ceilings because he quoted $800 and my more expensive guy quoted $1200 so we took that risk. They were meant to be painted a bright white and they are beige at best – he clearly didn’t use the right primer to cover up the dark wood. Don’t go cheap, you’ll regret it. I’m so glad that I went with the more experienced contractor for the house itself. 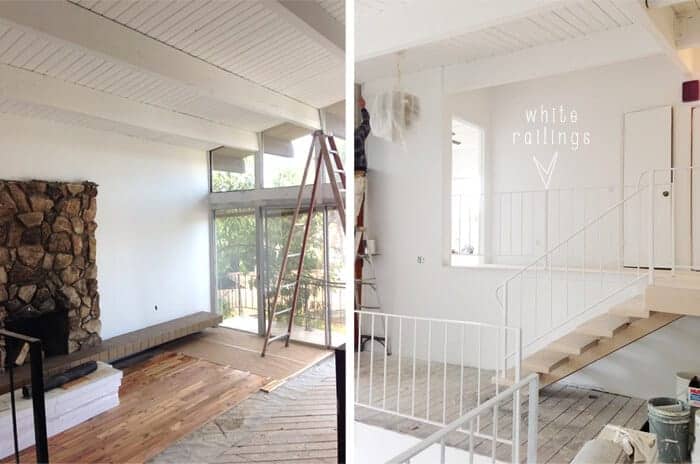 The second I walked in and saw the newly painted ceiling I felt a rush of serotonin, a wave of happiness, a surge of ecstasy. Our house was finally looking and feeling how I had dreamt it to be.

I am writing a huge post, nay ARTICLE, about how to choose wood flooring so that will come later, possibly next week. But for now we chose Acacia Hardwood from Build Direct. It’s absolutely beautiful and I loved working with them. It’s the perfect mid-century flooring – organic and natural and yet smooth and refined … with a Japanese bent. 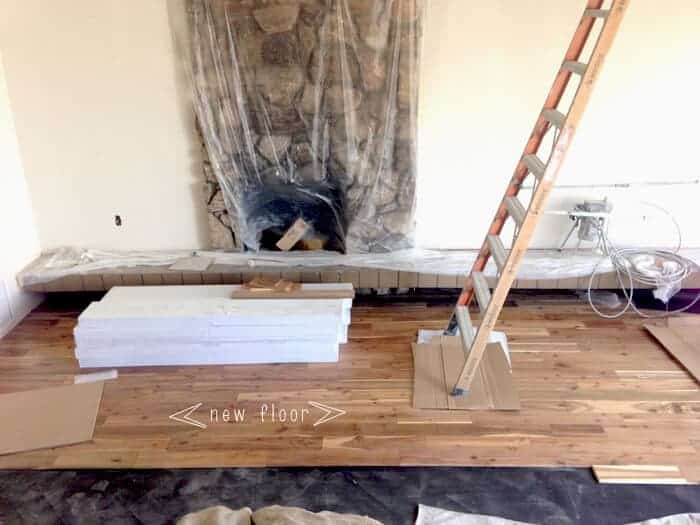 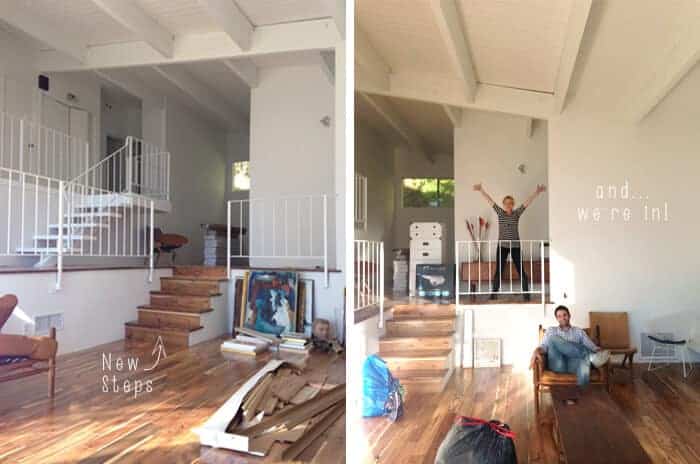 As you can see we redid the steps to be more modern and simple. It made the room look bigger, was the cheapest option ($1200 all in) and only took 1 day to demo and build. I can’t believe we stressed about those stairs so much, trying hard to figure out how to mimic the shape that was built already. I just had no idea how easy it was to redo completely. Lesson learned.

So, four weeks after we closed on the house we had finished all these major updates and we were able to move in. Five days after the move I gave birth to Charlie so the timing was perfect. We were settled enough to not go insane and coming home from the hospital to this brand new white and wood open house felt so amazing. 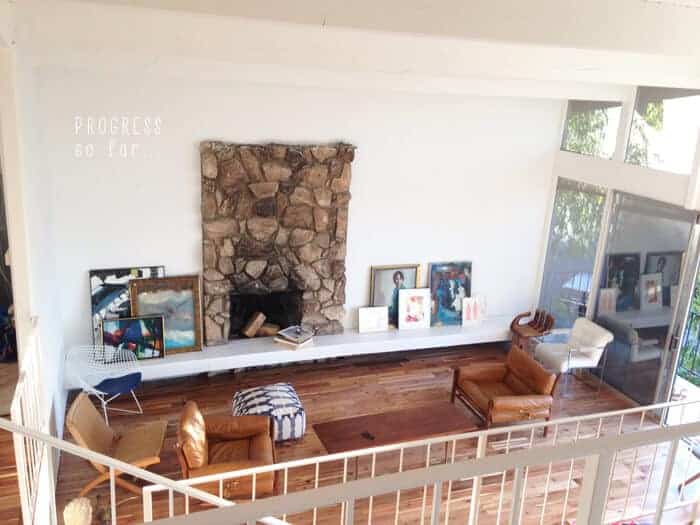 That was the day we moved in and there is more progress now, but I’m working on that post separately – design decisions are being made … 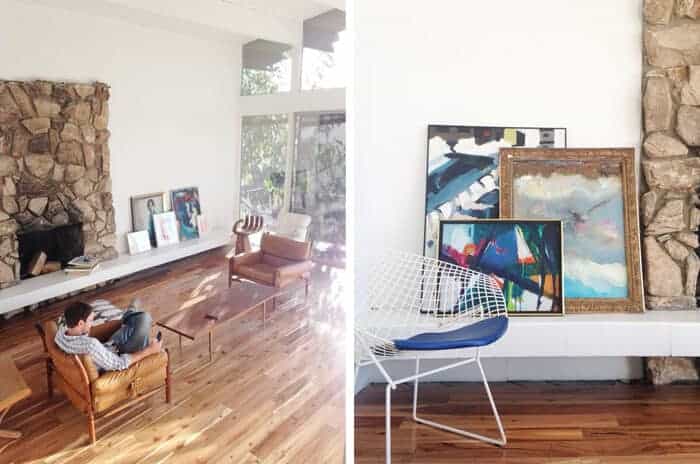 The only mistake I made so far was not putting electrical sockets in the middle of the floor before the flooring went down (for lamps). Thank god there is a bonus room (our studio) underneath with exposed ceilings so we can go through the ceiling into the floor and still do it, but for a few seconds I was like ‘EMILY, YOU IDIOT!’. Things just happened fast, decisions were rattled off and sometimes mistakes are made when you are working too fast.

All in all though, the room is wildly transformed already. I still want to demo out the fireplace surround and add something amazing instead (and yes, take it all the way up to the ceiling), but until I figure out what that amazing feature is going to be, its more than live-able.

There you have it, our living room progress. Any questions?  And if you want my painter’s information, email me and i’m happy to share it.

7 Comments
Oldest
Newest Most Voted
Inline Feedbacks
View all comments
Our sites use cookies to improve your experience. Learn more