Let’s just make it official: My days of being conservative in my house are over.

At this point I’m just using it for design experiments — a testing ground to try out weird stuff and a place to push myself creatively. It’s hard to convince clients to do crazy stuff; most don’t want to do anything that is too far out there, which I understand.

But for me? I’m no longer scared of doing something totally nuts in my more temporary rooms in my house (aka guest room, hallways, bathrooms, dining rooms — less so in bedroom and the main living spaces). I’ve gotten very dramatic in the last year and it’s not letting up anytime soon.

When we moved into the house I had to pick the paint colors in like two hours and I wasn’t ready to commit to really saturated colors. I had no idea what direction I wanted to go in. So I chose a pretty neutral for this guest room that ultimately isn’t doing it for me. It looked like this:

No, drug addicts do not live here.  Obviously there was bedding on the bed and a lamp or two, but we cleared it out to paint, m’kay? 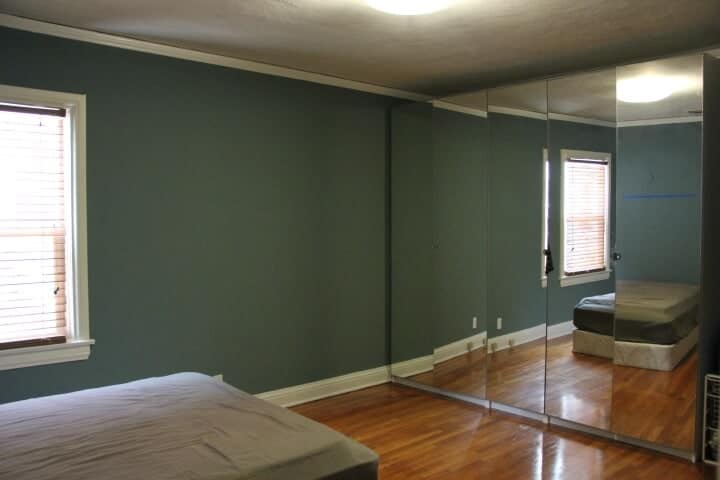 I have a whole wall of closets with mirrored fronts from Ikea on the other side of the room (we had a serious lack of storage) so this room is like 1/2 guest room and 1/2 my closet/parlour. And when we make a baby then it’s probably going to be the baby room, so I wanted to do something fun for that little one to start brainwashing bright colors into his/her little penetrable brain as early as possible.

I’ve been crazy inspired by Miles Redd lately and his totally insane use of color. He takes risks that I’ve previously been scared to. See? 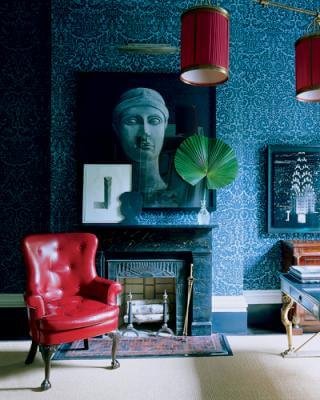 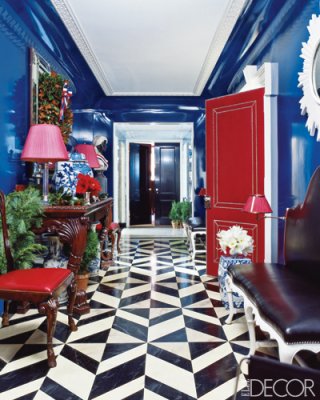 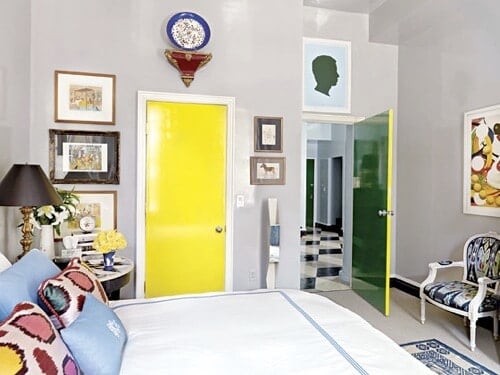 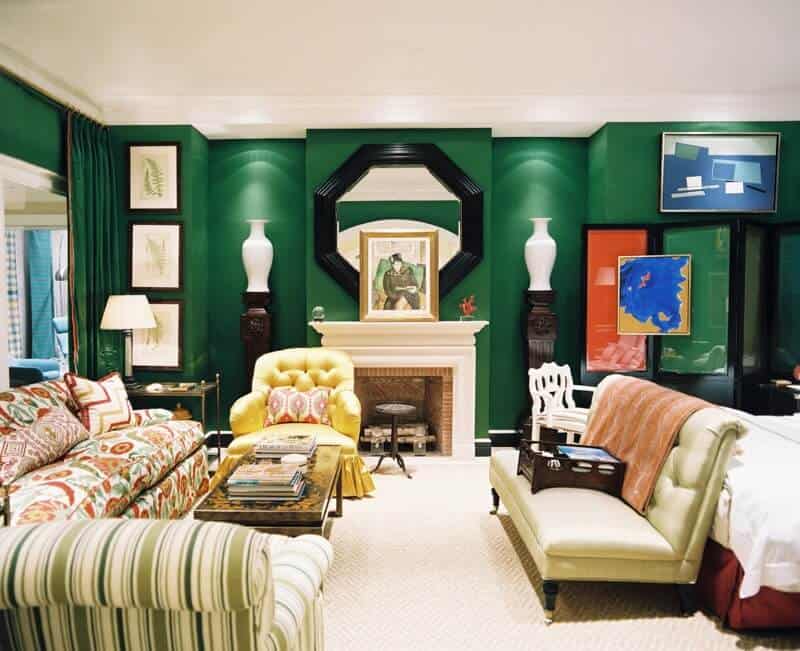 So exciting and bold, pushing all color boundaries.

But it’s kinda terrifying to put such bold colors on the wall, so when Valspar told me about their “Love your color guarantee, ” I was interested. Right now they have this thing where if you don’t love your first color, then you can get your second color for free (up to two gallons) until Oct 8th. This is the time to take the risks, friends. Besides your labor, there is nothing to risk. Just go for it.

I chose Valspar “Four Leaf Clover” and “Deep Sea Diving.” They are both super saturated (meaning full of pigment). There is nothing neutral about these two colors. 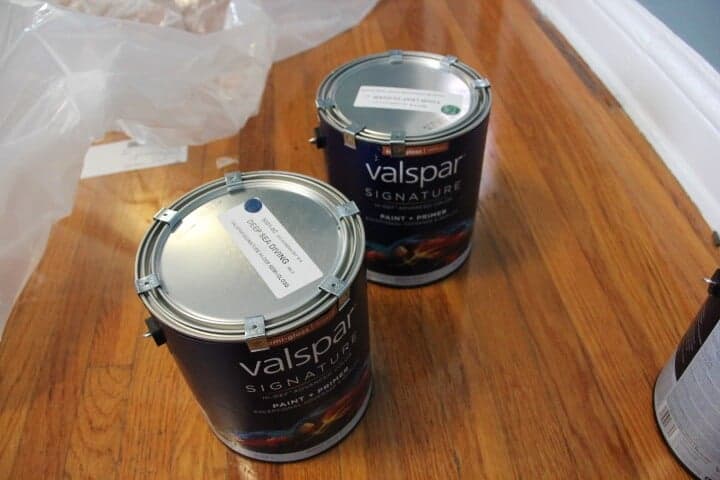 I decided that I wanted to try the two-tone-wall-painting-thing that I’ve been loving everywhere, and play with painting the door and moldings. So I taped the wall like so: 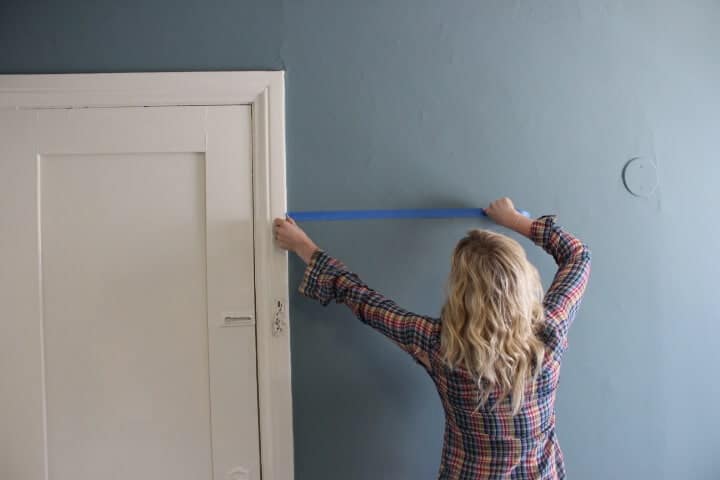 I knew I wanted to do the room mainly in the green, but I wasn’t sure if the blue would be on top or if I should just do white. I kinda played it by ear. The height I chose was fairly arbitrary — I knew I didn’t want it to be low enough that it looked like a chair rail, BUT, I didn’t want just a stripe around the top, so I chose something in between. It’s around 5’7″ — slightly taller than I am. 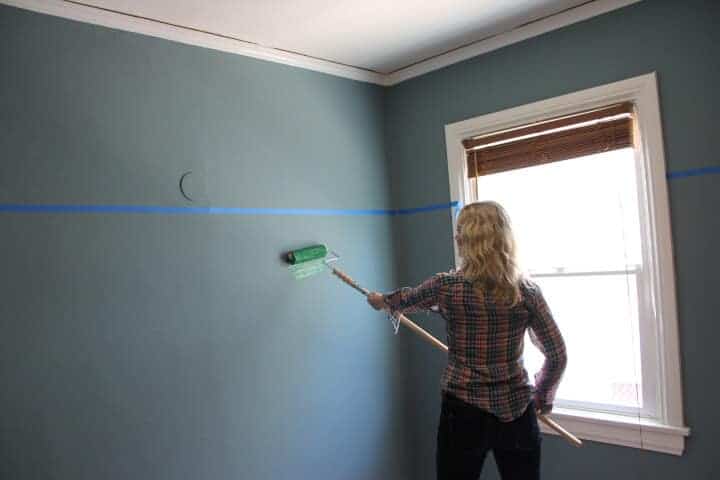 And then I started painting. I can’t stress this enough — painting is actually super easy, and the easiest and fastest way to change the look of your room if you are bored. Two gallons cost around $40 and even if you are slow at it, it MIGHT take one day. This project took a full day because we had three colors and we were working with semi-gloss, which takes longer to dry. 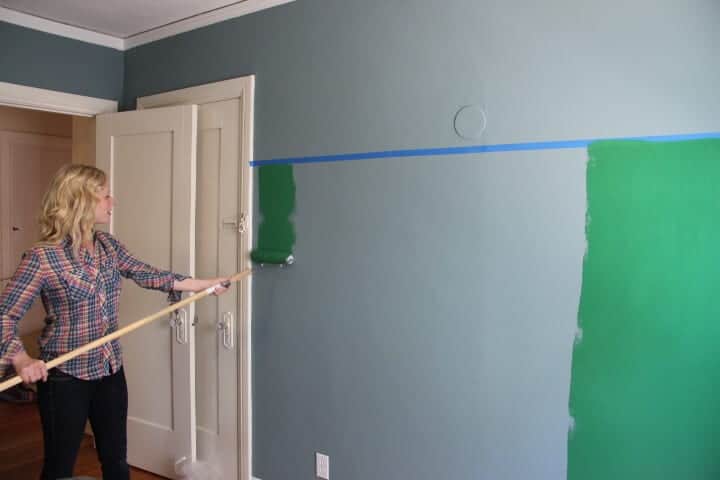 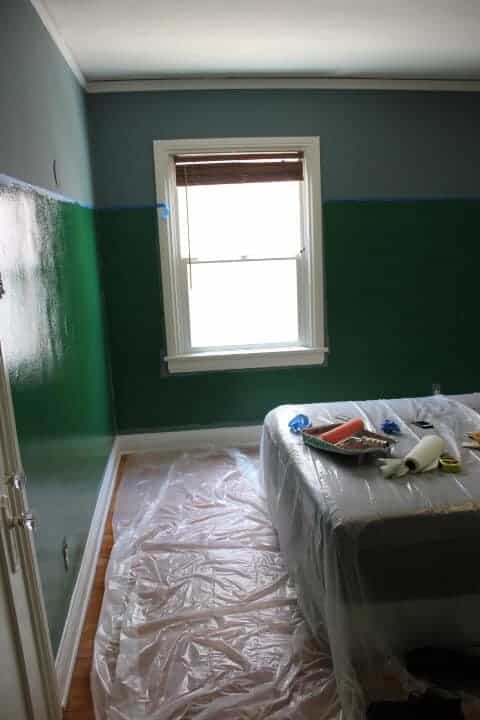 OK, the green was up. And boy was it up. It was GREEEEEEEEEEN, and I was happy. But if you aren’t, just buy a different color because for the next two months they have the whole www.loveyourcolor.com guarantee thing, which is awesome.

At this point I realized I definitely wanted to do the top white to brighten the space and use the blue on all the doors and moldings. You heard me. I chose semi-gloss because the room is kinda dark and I wanted to brighten it up and bounce some light around. Plus, I’m loving the look of glossy walls right now. I’m not sure if that was the right choice — in person it looks pretty great but it was sooo hard to shoot because of the reflection. You’ll see. 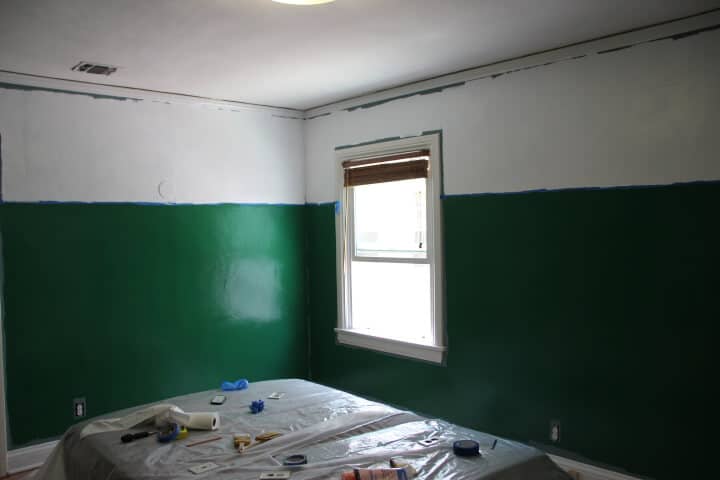 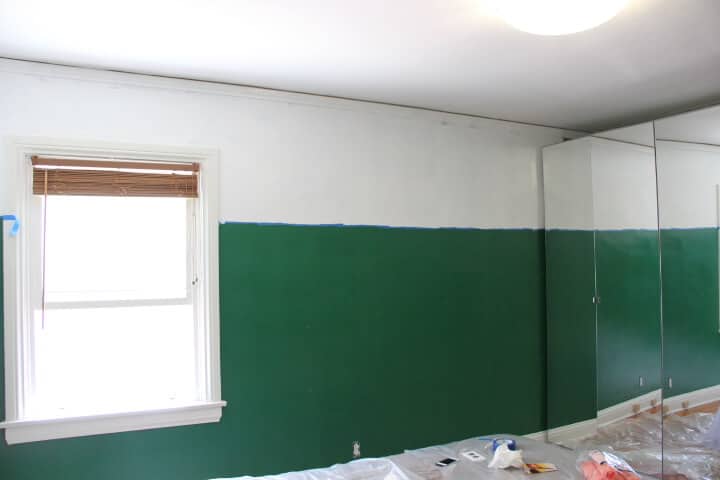 After playing around with the styling (I’ll show you the out-takes next week), I finally finished the design and decor. 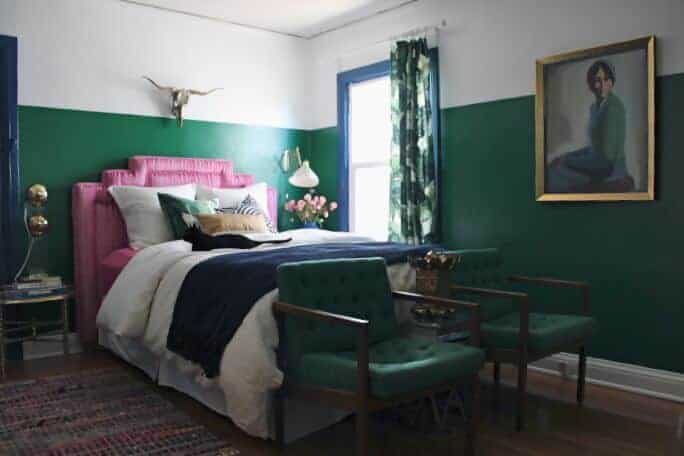 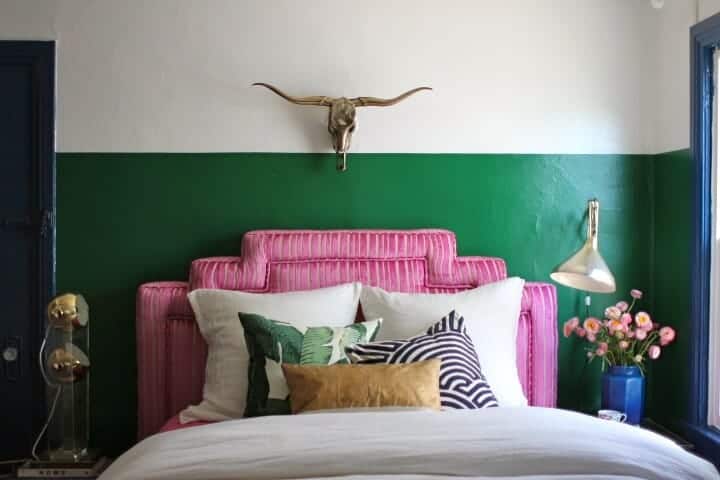 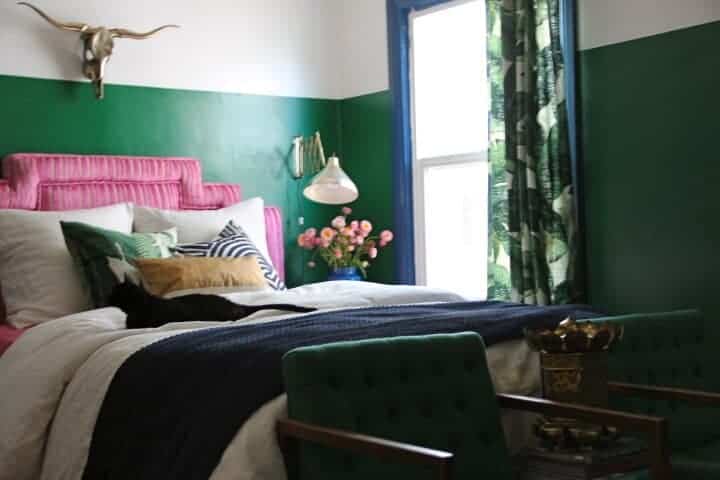 Bearcat is totally in love with this room, too. Although, man, with only one window it was super hard to shoot. This is why people hire professional photographers, but I like the challenge (and splurged on a camera so there is no going back now). 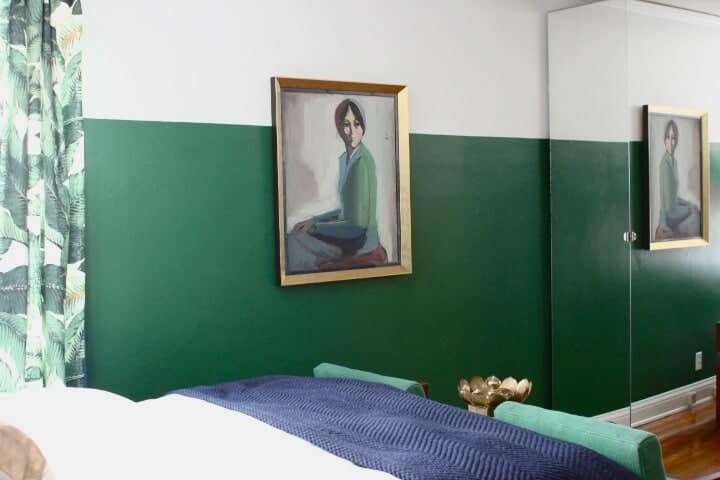 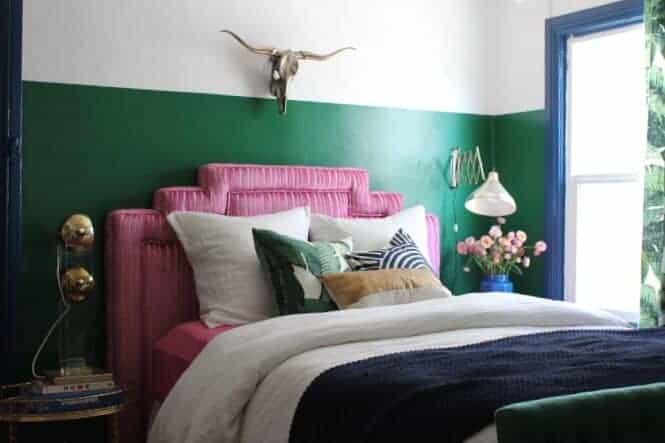 1. Headboard: I found the fabric at Michael Levine and gave my upholsterer a drawing with the dimensions. I wanted something more custom than just straight across, but I didn’t want anything too feminine because it’s in pink already, for god’s sake. The making of the headboard was $250 (I know, super cheap. I went into the valley to find a new upholsterer whose prices are ridiculous). There are some places where the fabric pulls weird because it’s kinda stretchy. It would bum me out if it were for a client, but since it’s for me, I’m kinda fine with it. Lesson learned — don’t try stretchy fabric in a tricky shape, especially with a language barrier. But I’m OK with it; it was cheap, and it’s for my guest room.

I love pink and green together, and wanted to take a risk with this bad boy and I love it. I put it on a standard metal frame with a bed skirt. Upholstering the whole bed would have cost wayyy more and it wasn’t a priority. 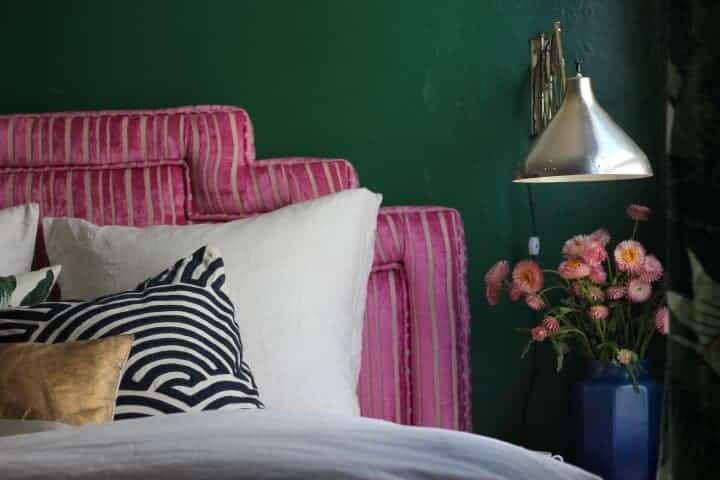 2. Lamps: All lamps are vintage, from the flea market, but stay tuned in September for my One Kings Lane Tastemaker sale because I’ve been collecting, nay, hoarding, a ton of regency and ’70s Palm Springs lighting to sell in the sale. 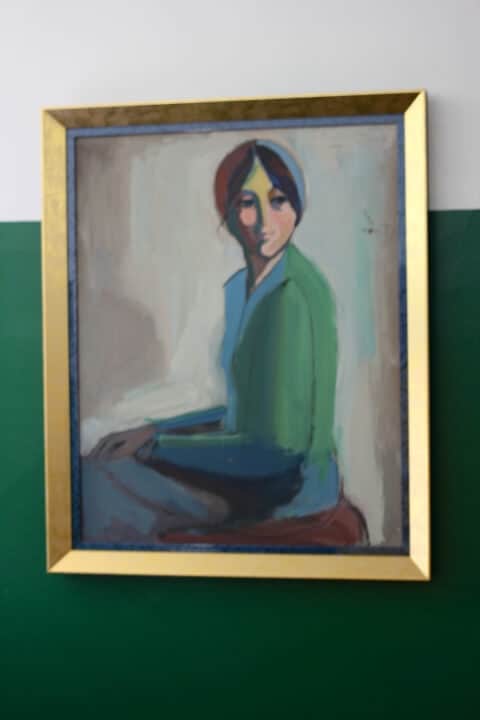 3. This vintage painting is from the flea market for $70 and I absolutely love it. I don’t know who she is or anything about it, really, but those colors and the way that it’s abstract, but not, draws me in. I had it framed at Hotel De Ville in Echo Park and I’m obsessed with it. I think the framing cost $250. 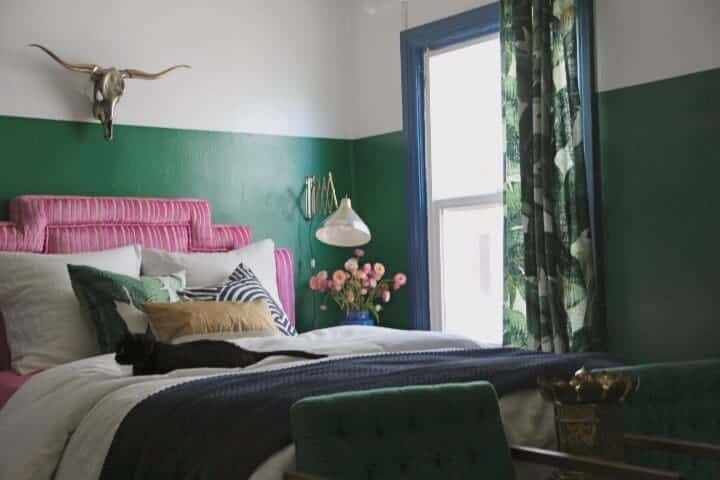 4. The drapery: I love this print and have wanted to use it for awhile, but Brian’s not on board with it so it was relegated to the guest room. It’s Tommy Bahama if you can believe that (once I saw that printed on the fabric I had a wave of regret, but then I was like, No, Emily, if you like it, you like it. And I love it.) It was $20 a yard and I could only find 3 yards (which is why there is only one panel, but I’m kinda OK with it.)

5. The pillows: Strangely enough HomeGoods had a pillow in the same fabric. I couldn’t tell if this was a great idea of a bad idea, but I took the risk and bought it. The blue pillow is from Lands End (as is that throw, which is my favorite — so chunky and warm and doesn’t shed) and the gold pillow is from West Elm.

6. The rug is from Cost Plus for $29.99. I’m on the fence about it and might move my other rug into here … I’ll never stop playing. But for now it works and was a good cheap option. 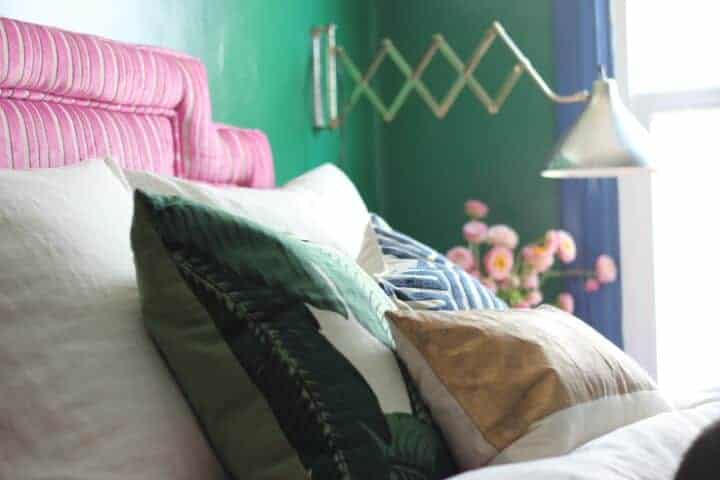 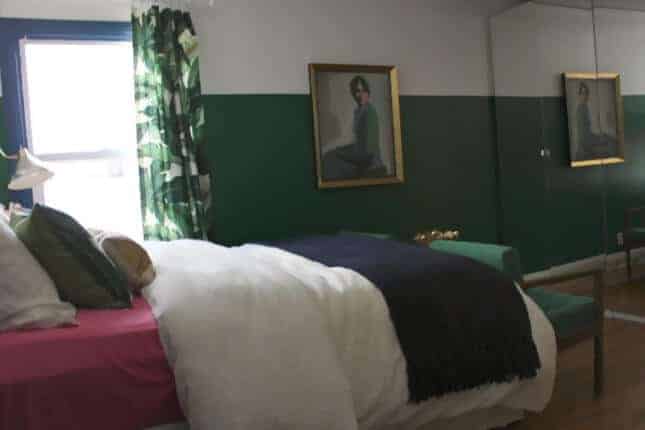 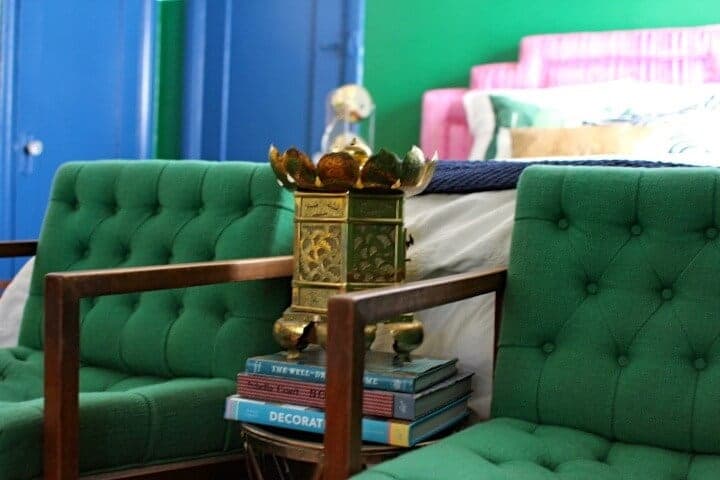 These chairs, you know I got at a thrift store for $60 each. Eat your vintage heart out. Yes, that button needs to be replaced but I’m too lazy to get around to it. The brass chinese lamp is from the flea market for $15. 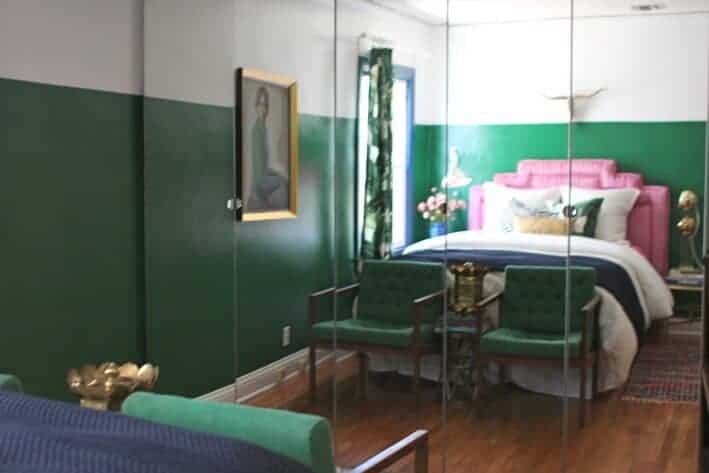 Weird shot, I know, but it was so hard to pull back and show you the context of the room, so I had to do this weird mirror shot. I love a pair of chairs at the end of the bed and these two were almost too perfect. The color is literally identical to the wall color — which I’m just kinda going with. It’s a crazy room, so why not have your chairs match your walls? Normally I’m a big fan of a bench at the end of the bed, but when you can find two matching chairs that are low enough, go for it. 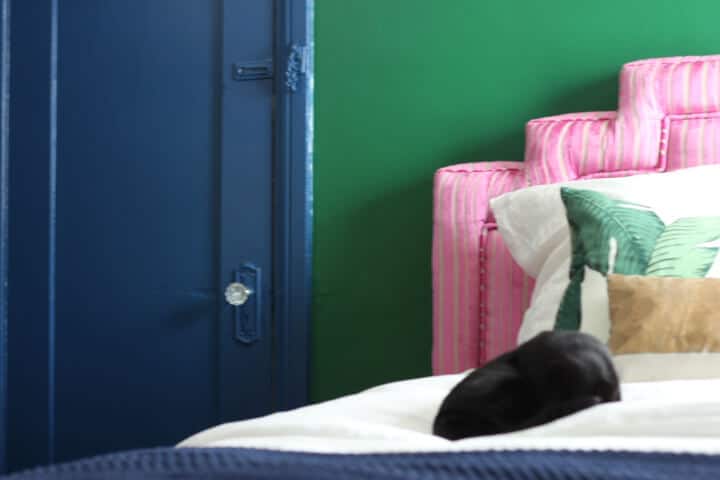 That door is non-functioning (it opens, but no need to), and the layout of the room was extremely limiting due to the wall of closets and the bathroom in the other corner, so I’m just kinda pretending that the door doesn’t exist. That lump of black is The Bear. 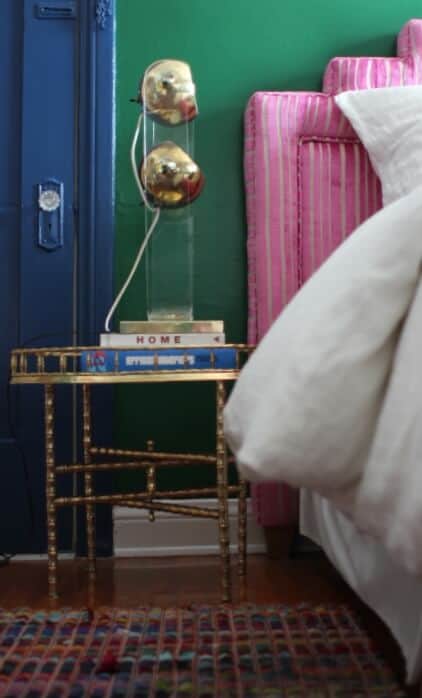 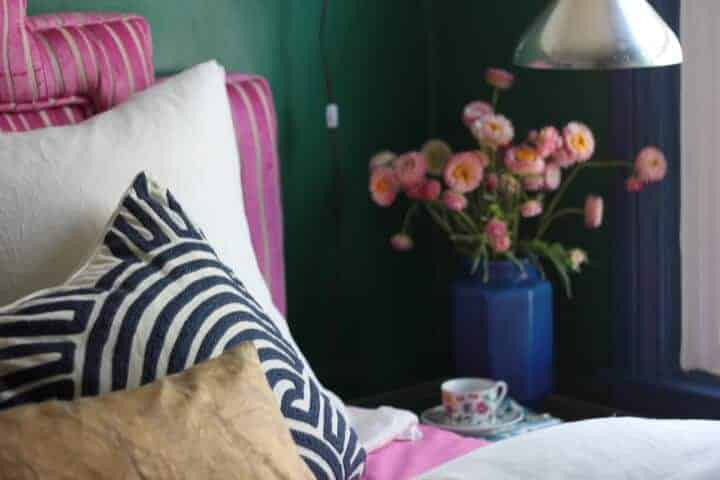 I love that pink and green combo.

Things I learned or general tips:

1. Using semi-gloss looks good in person, but if I were to do it again I would probably use flat. Miles Redd has all his walls professionally lacquered (not even sure how to do that) and that’s why they are sooooo high gloss, but the semi doesn’t really give off that look and it’s hard to shoot.

2. In darker rooms (like this one) you need to paint the room a color as opposed to a white or beige. It’s counter-intuitive, I know. But pretty white walls are only pretty if you have light bouncing around, otherwise they look dead. This room has so much life now, and it feels bigger in a way.

3. While I love the blue door, I’m not sure about the blue molding. It’s fun to shoot, but I’m going to live with it for a month and see how I feel, and then possibly paint it white. Because painting is just that easy.

4. At first I had yellow mixed in here (I’ll show the outtakes tomorrow) and it was cuckoo. When dealing with such bold (and kinda primary) colors, stick to three strong colors — anymore and it starts to look absolutely nuts, accidental, and really unsophisticated.

Again, the colors are “Four Leaf Clover” by Valspar and “Deep Sea Diving.” I love them both, a lot. I strongly encourage you to experiment more in your house with paint colors. Sure, maybe y’all aren’t as obsessed with decorating as I am and have other priorities (work, children, sleep), but it was so fun and satisfying to do … and it took one day of painting and one day of styling/decorating. Now every time I go in that room to change clothes, I get extremely happy. It’s bold and crazy, but pulled together enough (with the paired back color palette) to not actually scare anyone. It’s totally me.

So who wants to be my guest? And check out all the details at www.loveyourcolor.com

***This post was happily sponsored by Valspar Paint. And thank you for Valspar paints for sponsoring this because I never would have motivated to do it without some encouragement. Sponsored posts = better content, I promise.