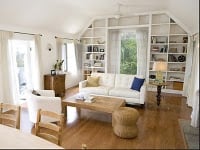 Ok. So I love that you guys want more info.
About the window treatments in the living room.  No, Ian didn’t want them, and I didn’t either.  Don’t get me wrong, I love drapery.  But in this case the views were spectacular (of the canyons) and the drapery is pretty feminine for a dude.  We did put very simple blinds in the den so he could shut them to watch tv if he needs them, but you can hardly see them (they roll up to be about an inch at the top of the frame and are white so you don’t really notice them.)

OH! here’s also why:  we all know that drapery hardware can be tricky (read: ugly)  – its often over-designed, when i just want it to disappear.  I love it best when its almost at the ceiling, but in the case of the living room you can’t have it at the ceiling because it is vaulted. So then the hardware adds so much busyness and distracts the eye from the bookshelves, that feature window and the views.  Also, the windows open in, so they fight with the drapery.  We could have done some sort of wood or bamboo rolling deal thing, but it just didn’t seem necessary – he doesn’t have privacy issues and would have added a lot of cost.  So no. no drapery here.
I did talk about this on the show, but some of the things have to get edited out, so this must have been one of them.
Ok, so lets go through some other pics.
Sorry, this is kinda  a blurry pic.  This is the tablescape from the 2nd look, and I think i like it the best.    I’m not normally a ‘set your table 24 hours a day’ kinda girl – i think it can be fussy and strangely creepy (like, did you almost have dinner and they you killed everyone?), but it did photograph really nicely.  I’m a ‘big-vessel-with-branches-and-maybe-a-few-candles-or-candlesticks-tablescape’ kinda girl

We actually have now put the bench back in the window at the back (where it truly belongs, just perfectly, from the first look) and used the ming chairs in his 2nd guest bedroom that wasn’t on the show (due to time/budget).  I bought 6 mismatchy farm chairs (ranging from $5 to $50) for around the table.  and i lurve them.  They bring so much character and history into the room, and were super cheap.
OH and bells of ireland flowers – so easy to style (they pretty much just style themselves), simple, cheap, beautiful, last a long time and a great pop-o-green.
Here what it the final tablescape looked like (below). And I like it, but Ian really didn’t like the indigo runner (in fact he said it made him want to kill himself, now, now, Ian, dramatic much?) – i actually preferred it without the runner, but it needed color for TV.   And i wish the lanterns were closer together.   It’s such a learning curve figuring out what looks good on camera versus in person.  And again, i know i have a leg up due to prop styling, but video is different – the light is different and the angles are different and you have less control because you are busy doing shopping segments and interviews, you really have to trust the people you work with.

But I LOVE the toile.  And so does Ian. It’s Thibault (I know, i know kinda old school decorator-y in a good way, right?)  Here’s the link
And to the guest bedroom:
Here it was before as a tv room, which would be fine left as a tv room, but due to the fact that we plan on watching hours and hours of tv there in big groups, this no worky for our needs.  The ‘office’ was unused and so much bigger and more inviting. So it only made sense that this be turned into a temporary use room.

I actually really love this little room. Brian and I stay over there a lot and its like a little happy nook (of nooky).  It’s super cozy and has a beautiful view, although ***WAY too bright in the mornings, so i have little blinds coming (ones you can barely see).  Ian doesn’t want them, he loves the view, but its hard to sleep in past 7.

OK Sources:  The duvet is West Elm, the wallpaper is Katie Ridder ‘Leaves’ in grey (I bought it from Harbinger in LA, to the public).  It was kinda expensive I think $250 for that wall, but its really beautiful and interesting – a masculine color in a feminine pattern.  The pillows were just sourced fabric from Michael Levines ( a toile to keep that theme going, and a silk grey and white stripe), and we sewed them to save some money.
Oh and I do wish I had been there when they took this pic – the bed is messy in a bad way.  It’s so hard
giving up responsibility, i never thought I was a control freak, but turns out I might have to be.

The trunk was a thrift store find for $100 (its big and old and sturdy as hell). Everything else was flea market (chandy was $20, lamp was $15, mirror $30, little bud vase from CB2 and buttterflies/wall ephermera was random flea market/thrift store 1 and 2 dollar stuff). The bed is an ikea platform base and their cheapest mattress which i DO NOT recommend – way too hard, i’m buying a pillow top to help out.
The paint on the wall is Gray Owl (BM) and was beautiful. It’s slightly warmer than the one in the living room and mimicked the color of the leaves.  I painted the ceiling gray as well, which i feel like keeps your eye moving instead of stopping at 8 feet high.
Finally i got rid of the terrible sconce and moved the j box (well, I didn’t, come now) to the ceiling.  I decided not to put the little shades on the chandy bulbs (because a. they are hard to find pretty ones, and b. they add about $100 to the cost of the chandy, and c. they are slightly suburban). So instead i bought little round globe bulbs which are awesome, but need to be dimmed (which we did). I think it makes this antique chandelier look more modern.   I found a matching black iron sconce (flea market, $5) that goes on the other side of the room (not-pictured), and did the same bulb-no-shade treatment to it.
I think with guest rooms you can go a bit quirkier.  People are only in them temporarily and every time i walk into this room i get happy, it’s a fun little surprise.   It still feels like the rest of the house, but just a bit more feminine and quirkier.  I could have oriented the bed to come out of the wallpaper wall, but it would have made this room teeny tiny, whereas there is still a chair/seating area in the other corner and room for guests to walk.  There is a lot of Emily in this room, fo shizzle.
Alright folks.  unfortunately i have to run because The RHONJ reunion just came on and its getting ugly really fast.  and I have my unfortunate priorities.  ‘We are in the ok corale? ‘.
wtf does that mean???