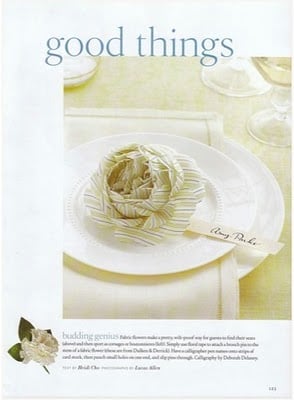 Martha and Mormons; why there are so many mormon bloggers

I agree with the commenters that suggested to keep the personal stuff still design related.  I definitely don’t want this to be some sort of journal where i tell you things like, oh say, how happy I was last night when Ali chose Roberto (and how hilarious it was that Brian showed up to the finale party dressed as Chris Harrison, carrying red roses and did mock interviews with everyone in attendance).
I’m sprinkling in some photos from a Martha Stewart Wedding shoot i did like 4 years ago.  It was one of my first jobs on my own.  Shot by Lucas Allen, i think.  Wondering why i chose these photos from this shoot? i’ll give you a two word clue – Martha Stewart and Mormons. (er. 4 words)
Where to start, where to start…
I’ll start with a frequent and lovely commenter ‘Lashley”s astute observation/question that still fascinates me, too.
Why are there so many Mormon or Ex-Mormon Design bloggers?
I knew there were some, but it wasn’t until I got a drink (i got a real drink, she got a non-drink, first clue) with one of them. We talked about blogs and design and after a couple of real drinks and non-drinks it came out that I was raised mormon.  She said, ‘I knew it!’ and i was like, huh?  from my blog?  Then she came out as an ex-mormon, too.  Then she went down the list of all the mormon or ex-mormon blogs that blew my mind and made me want to purchase a new mormon-dar because clearly i’ve spent too much time out of the game and can’t detect anyone anymore.
(i’ve been a heather armstrong fan for years and an often checker of the Neinie dialogues, but they are out and obvious, it was all the in the closet design blogs that surprised me)

So i did me a lot of thinkings.  hmmm…(tap finger to temple) Why Mormons?  and why blogs?
and here is what I came up with (i’m sure i’m not the first person to have these theories, but we all like to fancy ourselves astute, no?)
I’m about to speak in stereotypes for sake of well, making my point.  Sorry if I offend anyone.
God invented stereotypes for a reason, right?
Its no secret that Mormon’s are productive (and reproductive) people.  I mean they built a HUGE religion (and is still the fastest growing) in less than 200 years.  Growing up Mormon I only saw my parents relax and rest on sundays – they were always working, playing, cooking, journaling, teaching piano lessons, doing yard work, yes, refinishing furniture, just a constant flow of ‘getting things done’.
Likewise, I can’t just watch a movie, i’ll be sewing or mating socks or cleaning at the same time.  It’s like if you have free hands you should be doing something with them. Being productive can be a bit of an addiction and it definitely creeps into the rest of our lives, so blogging makes total sense to me.
In my early twenties at one point I had 4 jobs – walking dogs on the upper east side 3 days a week, bar-tending on the LES 3 nights a week, working at Jonathan
Adler on the weekends and teaching piano lessons.
Don’t worry, i also prioritized plenty of time to get into trouble.
PLENTY.

And i’m not the only one who was raised like this.
So there are a lot of women out there who probably had kids early-ish (or me, who hasn’t yet) and well, blogging is something they/we can do that feels productive, can potentially make money for our families and can be done from the home at any time.  And there is nobody controlling it, no limitations, no bosses – its productive but totally independent and ‘ours’.
Oh, and heres’ the other reason – we are raised as big journal-ers.  I have 10 journals filled from my childhood, so the idea of documenting your life is not weird, it actually comes super natural.  My parents felt it was really important to have us do it, and i’m sooooo glad I did.  I mean, re-reading my junior high stuff is priceless.
(Dear diary, Casey (by accident or maybe not!) touched my hand at the basketball game today. i love him.  Dear diary, i’m so white that  somebody told me today that i look like powder.  do i?)
It’s awesome to be able to go back  and read what i wrote at certain ages, and potentially understand and feel empathy for my future kids about stuff that we kinda forget as adults. and yes, past Emily, you did kinda look like powder.  and still do. thank god pale is back in (or so i keep telling myself). my teen years were R.O.U.G.H.

But why design blogs?
Hold on to your special underwear people, i’m about to rock your world.
Mormons, in general have a lot of kids, and kids are expensive.  Continuing with the ‘over-productive’ story, there is a ‘why buy when you can make’ philosophy going on as well.  So while mormons in more urban settings may not have been like this, I knew a lot who grew up yes, canning fruits and vegetables (and tuna in our case, we lived in a coastal town), sewing clothes or deconstructing hand-me downs, quilting, crafting, gardening and thrifting.  My parents had 6 kids and were both teachers so we weren’t billionaires.  We went to thrift stores LONG before it was cool.
And I swear on the Book of Mormon, that is where I got a lot of my creativity and style.  We could buy whatever we wanted because back in the day thrift stores in Coos Bay did the whole, ‘everything that fits in a brown paper bag for $5’ thing.  and thus my addiction for vintage clothing, furniture, jewelry, ANYTHING began.
Sure it was a secret, I didn’t tell my friends when they begged to find out where I got my clothes.
(ok, begged might be an exaggeration, they probably just casually asked because  they were curious why as a 12 year old I dressed like Audrey Hepburn in Breakfast at Tiffany’s or the kids from Sound of Music, oops still do)
So I was able to get creative with the clothes/tchochkes and furniture that I bought
and I started repurposing at a very early age.  badly, might I add.
I knew I wasn’t alone, but check this out:

Martha Stewart?  full of ’em.When I started styling in New York I worked a lot for Martha (Marty, i called her) and the first time the elevators opened onto her notorious 9th floor, i could smell it/them and   I knew I wasn’t alone.  It’s everything from the way they dressed to the way they spoke (you know, the funny mormon language where they say ‘feck’ or ‘fetch’ instead of, well, you know)  to the diet cokes littered on all the desks, to the complete lack of hangovers – and everyone was just so unbelievably effing nice.

Yes, folks, there are a lot of mormon and ex-mormons working for Martha Stewart.
Its like Home Ec Grad School.  It’s the best of the best of DIY-ers, crafters, sewers, etc.
Oh, me? I got my doctorate in decopauge.
And they/we all have blogs.
Hey Geraldo, check out that expose`.
BOOM.
So on the Design Star last week i talked about being raised Mormon while they showed me doing bad crafts.
Its almost as if how we are raised effects our lives forever, eh?
Next week on the show you’ll see A LOT of my craftiness.  It is my favorite challenge BY FAR.
Why? because it involves thrift store stuff that we can repurpose.
hello, comfort zone i haven’t seen you in a while.