Lets talk sofa for a little bit, shall we?  I got it at Room Service in LA.  It’s pretty awesome there because they can do anything in a few weeks.  A lot of their furniture is extremely high style and very on trend, which i love, but i want to be a little more timeless so i customized the sofa.  I thought that having it be wood would make it more family friendly because they couldn’t stain it, but the night before they delivered it i realized that perhaps that really hard wood wasn’t terribly kid head friendly.  I don’t have kids so i don’t totally know, but hopefully its not a problem for them.

I knew i wanted something not too light (for the kids) and something that is very tightly woven with a synthetic (to repel stains), and this color seemed so bright and fun, and yet not too bright or crazy.  I love how deep it is – you can completely curl up in it.  And i love how low it is so it doesn’t abstrcut the view.  The tufting is a bit out of control, but that’s high style, man.  I think it was around $2000 and i’m pretty sure they ship anywhere.  You can get it any color, with any stain on the wood, i chose ‘teak’.  Tell them i sent you so they might be inclined to hook a sista up.

Here are some more:

Standing lamp – Rose Bowl – $200, but in perfect mid-century condition, nothing cheap about this guy, its really beautiful.

Yellow vase (as well as the vases on the dining table in look 2) – Room and Board. They are expensive, like $100 a piece but great shapes and colors.

Plycraft chair aka mr. amazing:  Rose Bowl, $300 – and its what helped inspire the original color scheme, the upholstery is in perfect condition.  This one was hard to give up. I’m not terribly mid-century but i LOVE this chair 1/2 as much as i love bearcat.  Which is very very very much.

Accessories on the bookcase are either vintage pottery, cb2 or room and Board.

Ooh, lets talk bookcase.  It looked kinda dinky on that wall, but it wasn’t. Although it coulda been like 18″ wider.  I designed it and Chris the contractor built it.  Yes it only cost $200 in materials, but it was like 10 hours of labor.  He used wood blue, screws and brackets to keep it in place.  And he stained it an ‘english chestnut’ which he thinks looks the most like mid-century teak, and which i’m not totally convinced, yet i haven’t really found a stain that does, yet. But i like how it looks, for sure especially considering its medium grade plywood. 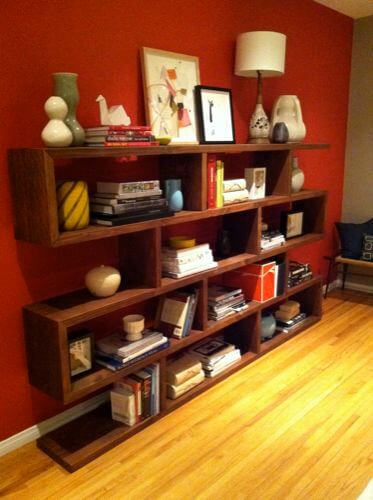 The artwork was Sage and Manesh’s friends, all super talented.  And the books were their’s, which shouldn’t be of note, but you’ll see, I end up bringing a lot of books to houses – dollar bins.  not proud of it, but must…style…room….

The woven folding chair is mine and remains mine.  Just loaned to them for first look, and yes if you are a blog follower you will notice that i just bought two at the rose bowl.  They will make it again in an episode. so sue me.  The credenza was not $200, i think it was $300, sorry my bad. I got it on craigslist, and its awesome.  Chris drilled a hole through the back and all the wires all through the wall into it.  But if you are in LA stop call Amsterdam Modern, Mod Crib LA, or Hernandez brothers, or the stores on Lankershim (Santiago’s, Cruz’s, Angels), or Pepe’s, or Sunset Bazaar – they all have constant rotating vintage credenzas and everything else you could ever need….and tell them i sent you, again with the hook ups, i need these people, people.  Speaking of resources, here’s my theory:  yes, it is a bummer if places start getting picked over so i understand why people don’t reveal some sources, BUT i also figure that the more business they get the more things they can buy and also its an effing recession so i want them to do well.  But do me a solid and tell them i sent you.  But no, you will not get the name of my reupholsterer, so don’t even bother.

That side table next to the sofa, the nesting tables and the woven bench in the corner all came from the Long Beach Antique Mall which is pretty great for mid-century stuff that isn’t a fortune. I think each of them were around $100.

That yellow lamp is from cb2. 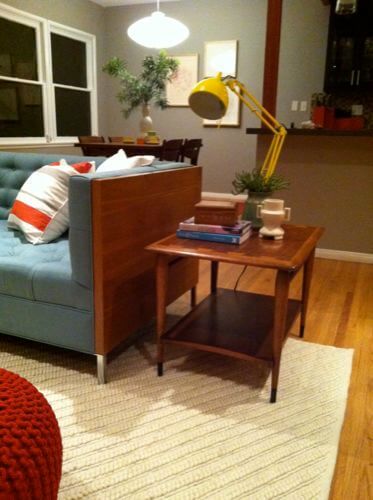 When we started structuring the show there were to be two ‘diy’ segments.  And as much as you all think i’m super DIY, i’m actually not. I like refinishing, painting, updating, but i’m not a big turn leftover straws  into your dining room table, chick.  But being agreeable i, well, agreed. So the painting of the pillow, while not being a bad idea and actually TOTALLY worked despite my suspicions, is not really something i would do.  Let me be clear, its not like they told me to do it, but it was last minute and i hadn’t thought of anything so my team suggested and i was like, yeah, totally why not?  I would find vintage fabric and have a pillow made, or I would take a vintage scarf and turn it into a pillow. But alas i painted a pillow. AGAIN, it turned out well and totally worked, just not exactly ‘me’.  (these DIY’s have since diminshed to only when its totally appropriate, instead its a lot of styling DIY’s)

And the orange wall? Also not me.  But I knew that Manesh loved orange and i new that Sage would want it changed (which she didn’t say, i just sensed) so it was a good ‘first look ‘maneauver. Also Orange is a super mid-century color.  But you couldn’t’ve paid me to leave it.  HOWEVER: it is perfect for an easy quick impact thing, and if i was in my early twenties a bright orange wall would’ve been fun (although i would’ve done turquoise).  Its just more ‘funky’ than sophisticated. ‘ 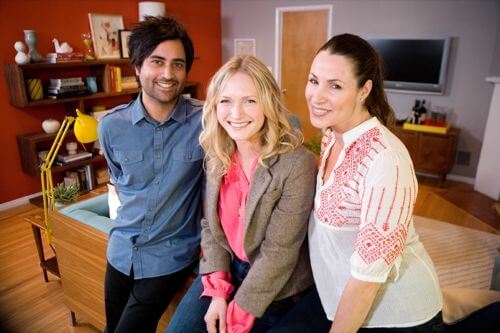 Also in case y’all are curious, my jacket is Emerson Made and is amazing. You’ll see it all season, i wear it like everyday, wearing it right now actually, and its worth every penny.  get it.

So that’s look one.  Any questions?  Also tweet me questions, because somehow they are easier for me to answer, i know i’m wayyyyyyy behind on answering emails, and i’m so so so so sorry. its just hard to prioritize right now.

154 Comments
Oldest
Newest Most Voted
Inline Feedbacks
View all comments
Our sites use cookies to improve your experience. Learn more