Thank you guys so much.  I can’t tell you how much the support means to me.  Again, its so easy to feel so vulnerable and exposed and you’d be effing shocked how cruel some people can be, but every single comment here makes me feel better and confirms that maybe i should be doing this.  And if you liked that episode, you are in for a treat because its my least favorite.  Yep.  It just gets better and better.

Alright, lets talk color inspiration.  I’ve been obsessed with this color palette for a while.  Ever since I saw this photo from House Beautiful:

I mean, that dark dark jade, that totally warm and inviting gold/ochre, and i didn’t even realize til this second that they used lavender roses too, i’m not kidding.  Its the perfect combination of warm and cool tones, its strangely unexpected and yet i want to be in that room so bad.  It feels so old world and yet totally modern at the same time.   It was the original color inspiration for the first episode.  Once i found the gold chairs, i decided to recover the sofa in that dark jade linen (almost a navy, but more turquoise).  Oh and let me break down the cost of the sofa:

I think it was $100 from the flea market (i said $50 on the show, and I actually don’t remember, but no more than that).  When I saw it i immediately bought it, it was massive and i knew it was going to be a pain in the arse to move around, but totally worth it. Those lines are ridiculous, the tufting is fabulous, it was long enough for that really narrow room, yet low enough to let the windows do their job. 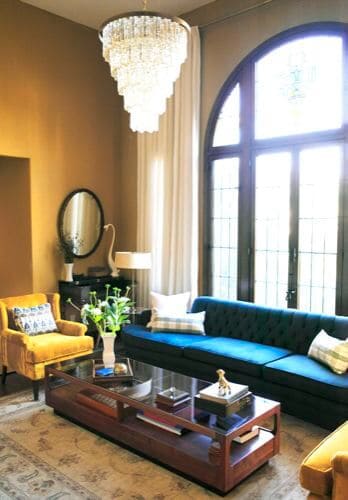 When reupholstering i really try to stick to fabric under $20 a yard or it starts to get insanely expensive – i needed like 15 yards for this sofa. Here’s a secret: i generally stick to linens, cotton velvets and denims for my upholstery.  Why?  they are all thick and durable (linen, less so) and they are all normally no more than $12/yard.  I splurge now and again on wools, but i don’t see the point in spending $30-$50 a yard on a solid color that will a. look the same on camera, and b. feel just as cozy.  Thats when it starts to get as expensive as buying a new great chair from like Room and Board or something, which starts to defeat the purpose.  Sure, i don’t just buy vintage because its cheaper (clearly i’m obsessed with updating the old) but it doesn’t totally make sense to me to make a chair end up costing $800.  Although, you’ll see that i do splurge here and there in the season on pieces that i have become emotionally obsessed with. 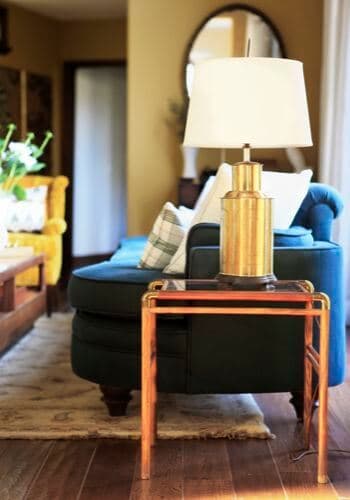 Here is an issue, however, if you don’t splurge on upholstery fabric don’t get it too dark because most likely its not treated to withstand the sun and will fade eventually.  I didn’t learn this until after i finished their sofa, and i was told it would take like 10 years and may not ever happen, but still, that’s a bummer.  They actually don’t have direct sunlight so it might be ok.  And who is to say that most fabric won’t, but if you feel like splurging on a piece ask around to make sure its treated to withstand that big ball o fire in the sky. 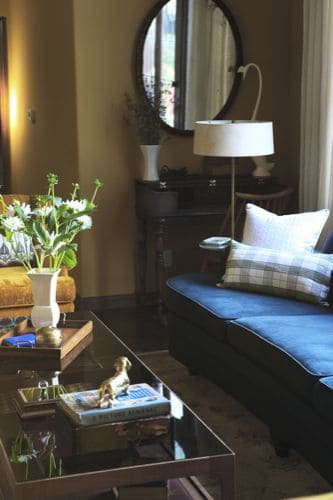 I shopped in LA for the fabric, but i couldn’t find thick enough linen for under $20/yard, so i went back to a crazy good source in New York, Gray Lines Linen (i have a swatch card and i had them ship it) and its $7 a yard.  They have a ton of different linens – metallic, hankerchief, upholstery weight all for around the same cost.  It’s where i got their drapery fabric, too – which you couldn’t tell but had silver metallic threads running through it, so pretty for $7 a yard, too.  i think the cost was $900 to recover the sofa – which includes all new foam (which you want to get). Yes, its a lot of money, but this is a pretty good price.  If you get a quote for $1200 then don’t be surprised, but if its much more than that, shop around.  Although, i live in LA and there is a massive market for this so i have no idea how expensive the cheapest place in a smaller city would be.  Now the guy i have is even cheaper because i give him MASSIVE amounts of business (probably 3-4 items a week), and he’s incredible.  Here’s my mistake:  i should have got the foam cushions with feathers on top – its probably $200 more, but those bottom cushions were crazy bouncy – they’ll get softer with time, but its not as comfy as it looks.  SO i think the sofa totaled:

plus delivery from flea market to reupholsterer:  $100 = $1205, 00.  Which is a pretty great price for a custom sofa that is total one of a kind, vintage and massive.

Anyhoo.  The gold chairs look dope with the blue sofa.  And the blue sofa looked awesome with the gold walls (benjamin Moore ‘Leaf of Faith), but my biggest regret is not recovering the chairs in an ivory linen.  Those walls were begging to be a warm tone, the room had such high ceilings and was so vacuous that it couldn’t handle a cold tone – the blue walls looked good on camera, but in the room it was cold and alienating, and it clashed with the woodwork, which was redder.   But the gold chairs with the gold walls didn’t look good on camera, in the space it still looks great, but had they been a creamy linen they would have popped so much more.  Ah, regrets.

A couple days ago a friend of mine sent me some sartorialist pics of my color palette, it confirmed it as my total favorite (right now). 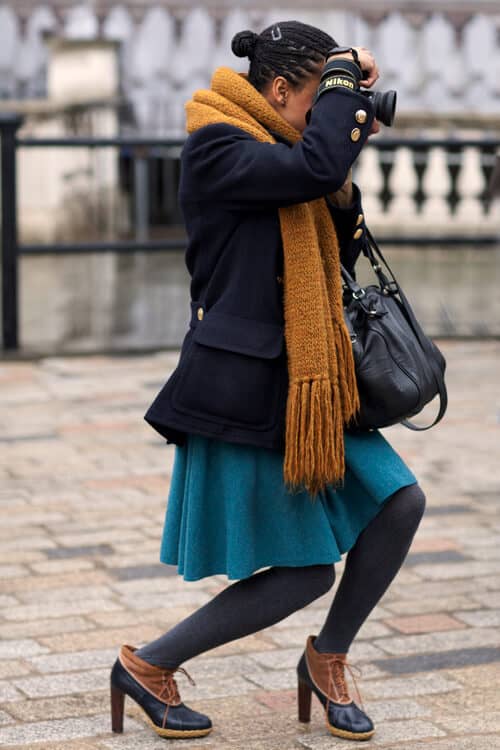 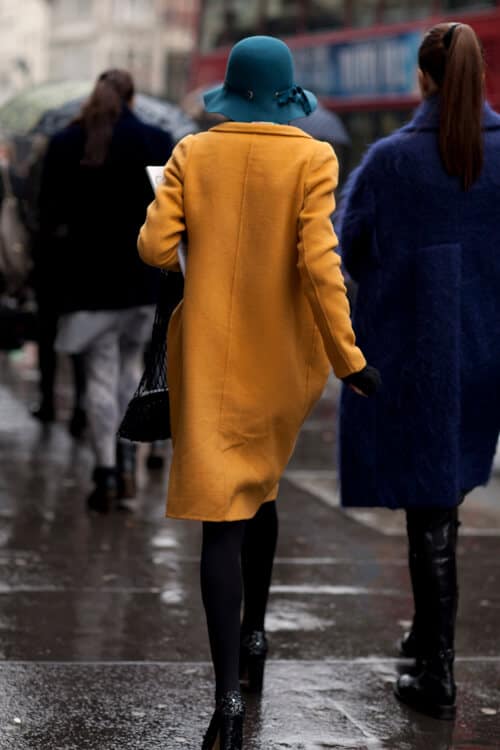 I would just want a pop of red.  that’s all.  But the ochre, dark turquoise, and light leather is totally perfect. 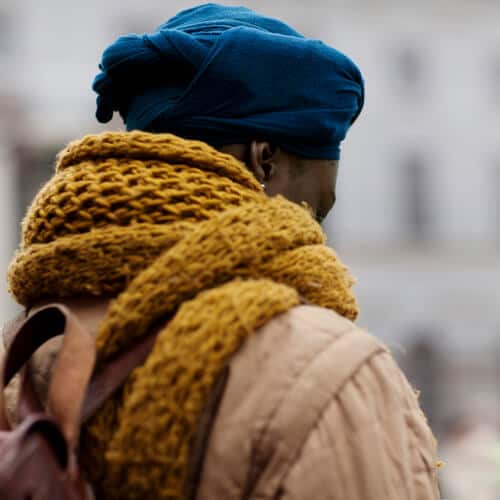 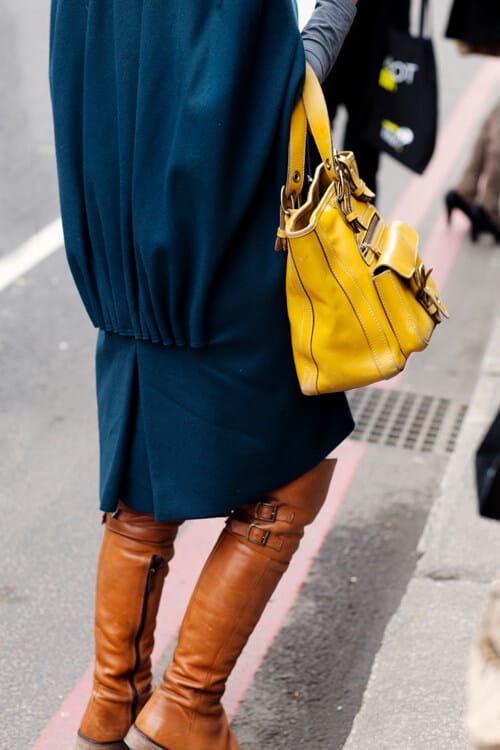 OH and if you guys want to post and repost pics, feel free, just PLEASE credit Laure Joliet (and myself).

872 Comments
Oldest
Newest Most Voted
Inline Feedbacks
View all comments
Our sites use cookies to improve your experience. Learn more