Alright, first of all i’m so psyched that in general yesterdays Mormon ‘Temple interior’s’ post wasn’t taken as offense and more as a design conversation. Secondly, after doing proper research that i probably shoulda done in the first place (I was sure that there weren’t going to be pics, but there are) I was wrong and that some of the temples are really beautiful inside, I just hadn’t seen them.  That makes me pretty ignorant.

So I found some to post, the one up top is really beautiful – the architecture is grand and detailed, the chandeliers are quite beautiful and for the purpose off this hallway it really does lead you down in a very very calming peaceful way.  There is balance without symmetry and the furniture feels substantial and pretty without being pretentious or impractical.  I love the color palette, too.  There is more contract in this one, than the others which I like. 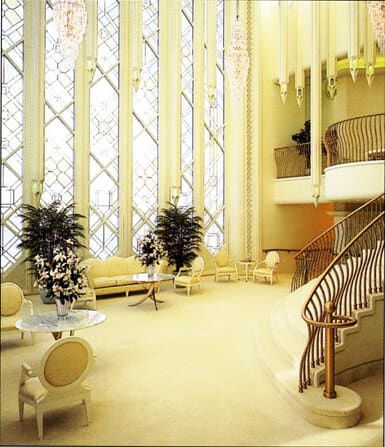 This is the San Diego temple that most of the commenters were saying is so beautiful, and they are right. I think that the composition and the angle of the photo is off, but the general feeling of grandness and comfort is spot on.  And it looks so much richer than the New York temple – although, you know I was thinking about it and I think one of the things I was probably responding to in the tour is the fact that there were so many people there being toured.  Obviously the main function of the temple is to commune with your God and pray and be faithful, so the peaceful aspect was kinda lost during the tour which probably made me judge it unfairly.

A lot of people left comments that each temple is built specific to the area and the decade, which I love.  And that they try to use local workers and materials, also an A+. 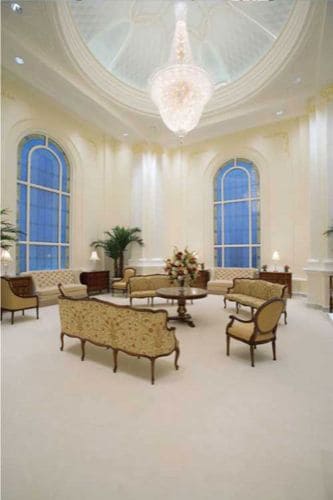 This one I like the huge windows and the chandelier and the tufted pieces, but I kinda want to reupholster the other pieces in white silk velvet – there i go being totally unpractical again.

I just think it would be so fascinating to be one of the designers.  I mean, if you are a true believer than you believe that you are building one of God’s houses, right? I mean, that’s insane! Talk about pressure.  I can’t imagine the how proud a designer would be afterwards when member start entering. 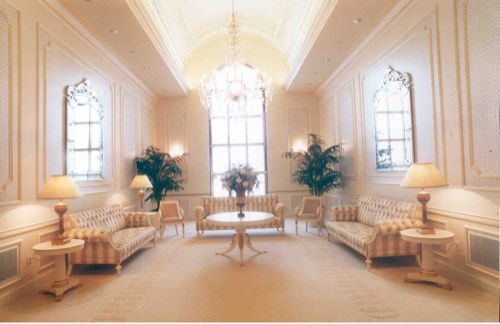 I also love (and NO this is not me feeling bad that 2 people got offended and now i’m all kissing A) that the temples feel pretty disinctly American.  Mormonism in my mind is a American religion (I’m just saying where it was founded and grew from) so it makes sense that they don’t feel too cathedralish or gothic, they are large in scale, the furniture is totally early American and classic – lots of setees, wingbacks and louis chairs (ok, french, whatever, we all came from somewhere).  The pic above in from San Diego and those mirrors and chandelier are perfect and more what i have been picturing.  It could be just the composition in the camera lens, but I kinda want everything to come off the walls and float in the middle more – but then again, its not for gatherings where people talk to each other, more for couple and personal time.

As far as the non-design related conversation, no former Mormon has the church’s back more than me. Nothing annoys me more than other religions thinking that Mormons are the nutty ones.  It’s like really, your people never made any mistakes? and your religion makes soooo much more sense?  The LDS church cares more about family, community and the world more than the individual, and not all the religions act that way.

Also, my newest fascination is with all of the liberal democratic Mormons that i keep learning about.  Yes, please.  It makes so much more sense to me, to be honest, but I didn’t know you really existed.  Introduce yourselves, please.  I’d like to be friends with you.