After 12 years of renting together, Casa Hendo, our first purchased home, is officially born.

You’d have to be a real ‘Inspector  Clouseau’ not to have guessed that this was our big news. My big mouth has been leaking hints constantly; I stopped the #ehhousehunting on my Instagram a month ago and I announced my vintage moving sale and the garage sale — but I was too nervous to announce the news til it was official official. Home loans are very tricky and every day they were asking for my 1065 from 2011 and I was like, ‘Sure, of course. I’ll also add up my 419 portfolio and get you the serial number to my flux capacitor.’ As if I know what a 1065 is …

But we made it through, closed escrow and we are officially homeowners thanks to Brian’s VERY good real estate skills (work with my husband, friends, cause I’m still offering FREE SERVICES to people who buy or sell a house with him). Also we are having a baby. Also I’ve decided to only wear elastic waist pants from Ann Taylor loft and stop coloring in my eyebrows. It’s all changing and it’s time to embrace adulthood.

There is A LOT to do in a couple of months folks. A LOT.

I actually never thought this would happen — the house, not the baby. We had rented for so long and were pretty used to it. Los Angeles real estate is ridiculously expensive and I just never thought that we would be able to pull together the finances or if we did we would be so broke that we would not be able to afford to eat anything non-processed for months. Then earlier this year my property manager rejected my kitchen update proposal AGAIN even though I would have gotten it sponsored so they would have had to pay for virtually nothing. He said, ‘Why don’t you take the time and effort you’ve put into these proposals and save your money to buy a house that you can do whatever your heart desires to.”

After I cooled down (Oh, I was PISSED) I turned to Brian and in one of my first hormonal rages said, ‘You buy and sell houses. I design houses. We of all people should be homeowners and we are officially buying a house.’ We just needed the motivation and to grow a pair of grown-up balls. Brian saw that look in my eye and knew it was going to happen with or without him, so he came up with the plan. We started saving every penny and we both started working our ears off to get a down payment together. Then with his resources, my vision, and some help from some very, very loved ones we made it happen.

It’s a massive financial risk and we are going to be house poor for a while like every other person I know who has bought a house, but we’ll be eating our delicious 10/$1 Ramen in this house: 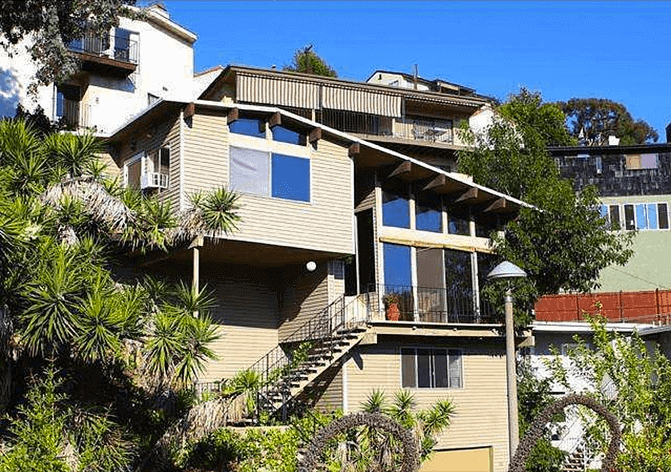 It was built in 1964 and has a lot of 1980’s and 1990’s finishes (like that vinyl siding). It’s a fixer upper but certainly not a huge renovation job. The space itself feels big and open and has enough architectural interest to make me so happy, but yes I get to do A LOT. Finding a fixer was obviously important to me because I WANT the projects. I’m DYING to renovate my own house — for the blog, my job, and my emotional satisfaction. I want to make my own piece of art, not buy someone else’s shoddy piece.

We looked at so many houses where Brian was all, ‘It’s great, right?’ and I agreed, but it was too good. Then the ones that wreaked of cat pee, needed all walls to be torn out and opened up, and were virtually unlivable I was like, ‘IT’S PERFECT, right?’ and he just looked at me with horror and total confusion, thinking I MUST be kidding.

So we had to compromise … but not after a few hormone induced weep-fest fights (well, I was the only one really fighting, Brian was just really confused why I was crying so hard). It went something like, ‘How don’t you understand my obsession for renovation?’ and ‘I can’t spend another day making somebody else’s house look prettier than mine’ etc. Total woe is me garbage that only a pregnant chick can cry about. Oh, how violently I cried  because that nesting hormone had taken over my body like an alien horror movie meets ‘Money Pit.’

Thank God Brian made me hold out for this house. It’s the best by far. It has just the right amount of projects for me, but it’s actually livable soon with some quick flooring and paint updates. 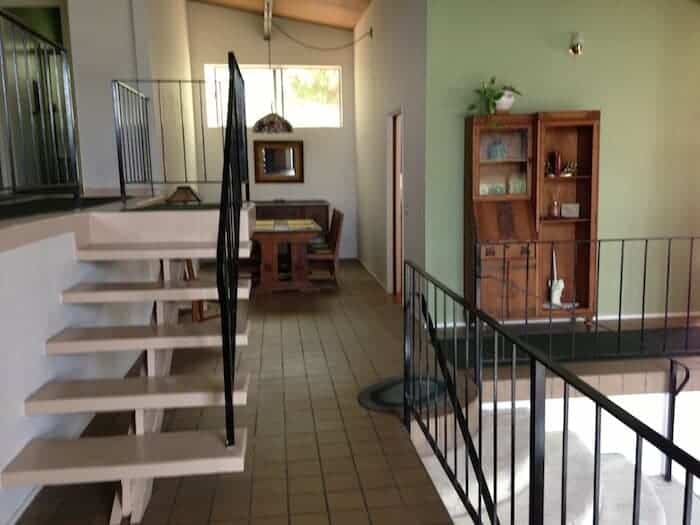 It immediately feels open and airy. It feels big even though it’s not (2, 000 square feet). It’s mid-century but it’s not exactly a John Lautner. It’s special to us, but there are some weird issues and cheap finishes that need to be fixed. Lots of projects to get my grubby little hands on.

When we were shopping for a house, our priorities were:

1. Lots of natural light. I can’t live in a dark house. I’d rather live in a small bright house than a large dark house. For work (shooting) and for life.

2. Enough space for little Jr and family to stay comfortably and an office for me. We weren’t going to be able to buy a house and get an exterior studio for me so there needed to be somewhere for me to shoot/work. This guy has a large bonus room that I’ll show you once it’s cleaned out. It’s full of boxes now.

3. NOT a flip. Obviously I don’t want to pay for someone else’s bad taste that I would have to change immediately, but also because I want content for the blog. I’ve been doing friend’s houses, client’s houses, etc. for sponsored posts and frankly it’s just time to put that time and effort into my own where I get total control. You are about to get A LOT of how-to-renovate your house content, and this time for and from yours truly.

4. An architectural point of view. I would have settled for a house that didn’t have a lot of character or interest if it were in a great neighborhood or was super cheap, but I was really hoping to get something with a point of view; a house that had something architectural to say for me to draw from.  It could have been Spanish, ’80s, ’70s, ranch style, craftsman, mission, etc. — any style … just something that I can restore to how it should be.

We let go of our favorite neighborhoods and bought in Glendale, which isn’t exactly Mc.Hipsterville, USA. It’s VERY close to where we live now (10 minutes) but less desirable because it’s less hip and therefore so much cheaper than Los Feliz. In fact, we were trying to buy in an up and coming neighborhood (Highland Park, Mt. Washington) but because I wanted a fixer upper we were competing with investors who were going after the exact same houses but paying cash to flip. So by going to a secretly less hip neighborhood that is actually way closer to the best neighborhoods we got such a better house.

The living room has these enormous windows and amazing ceilings. Sure, the carpet, tile, and railing all have to change, but its got good bones, people. GOOD BONES. And it’s up on this hill that has sweeping views and insane sunsets. 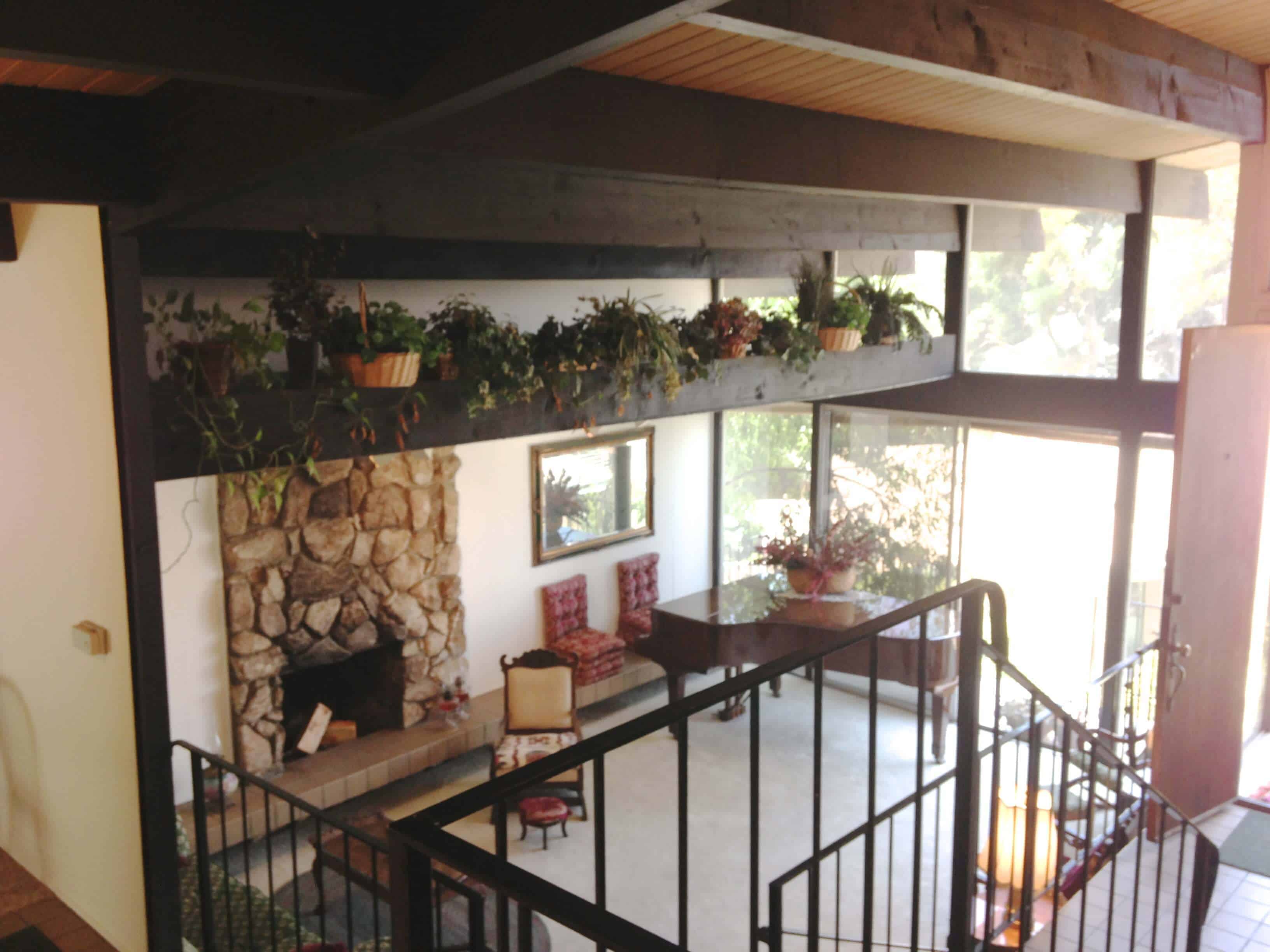 I love that weird beam with the plants hanging on it. It’s just full of mid-century quirk and problems to solve. I’m dying to of course get rid of all the railings, but if poor little Charlie/Oliver/Starke has my lack of grace and terrible spatial awareness then I certainly can’t get rid of anything that would help guard him from his daily falls. 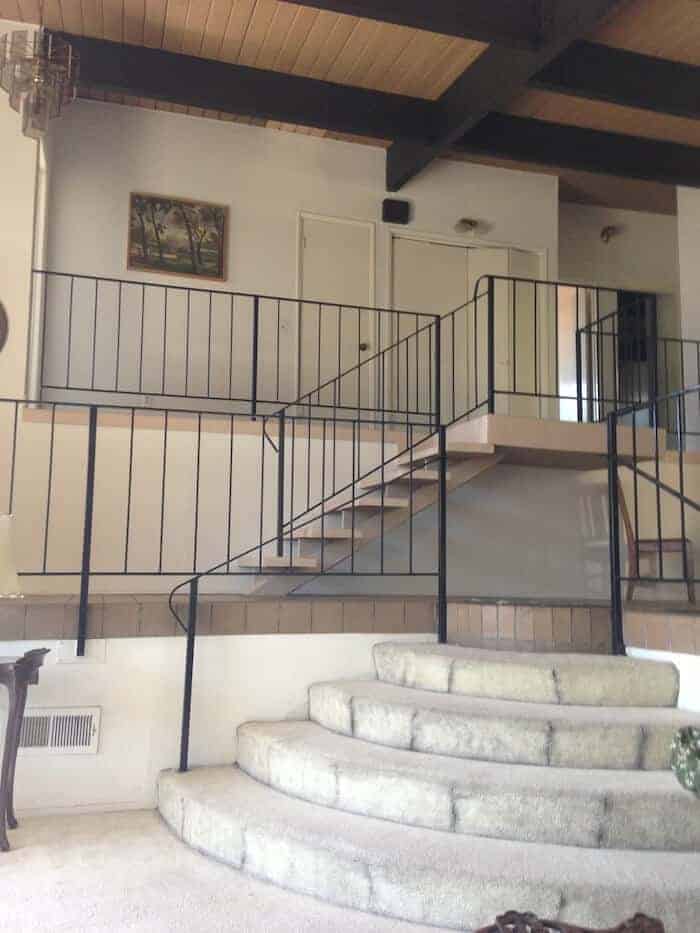 Up there above the cement stairs are the three bedrooms that overlook the living room. (I’ll show you the bedrooms this week.) 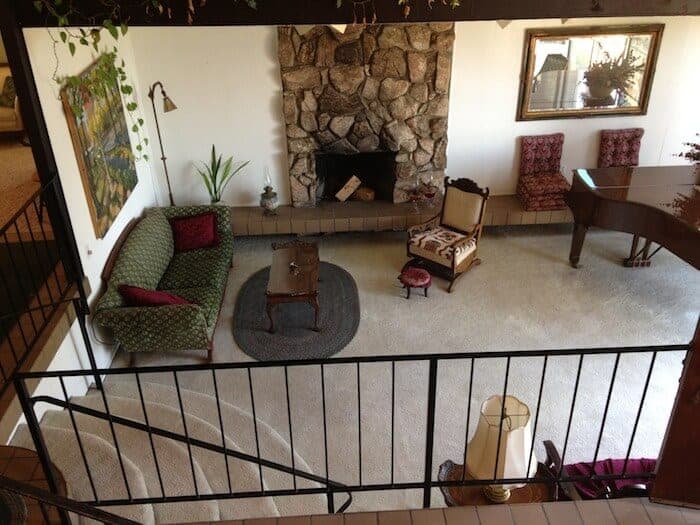 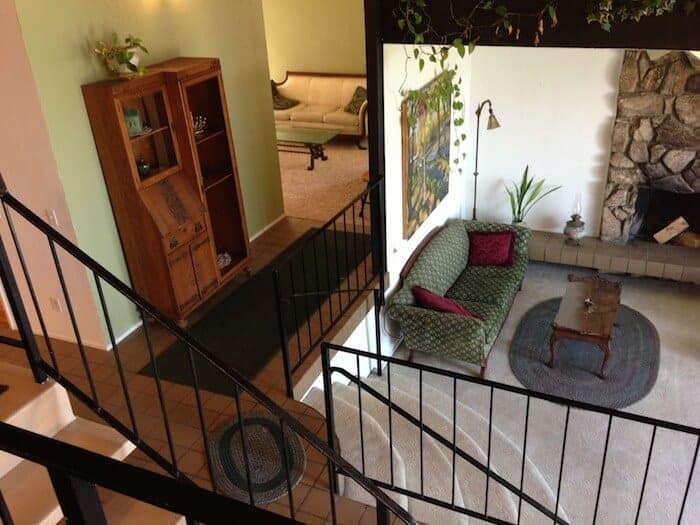 It’s not fancy, but it’s very special to us and we love it so much. It’s where Brian and I are going to have our babies, our friend BBQ’s, and our first memories as parents. It’s where little Charlie/Oliver/Starke is going to learn to crawl, walk, and talk. And it’s where I’m going to obsess so hard over every detail. I’ve never been proud of where I’ve lived. Nowhere we have lived has ever represented what I can do as a designer so it’s also been full of excuses. So while this project will take years to complete, it’s going to be a house that I’m going to be very proud of … a living representation of our style and art. 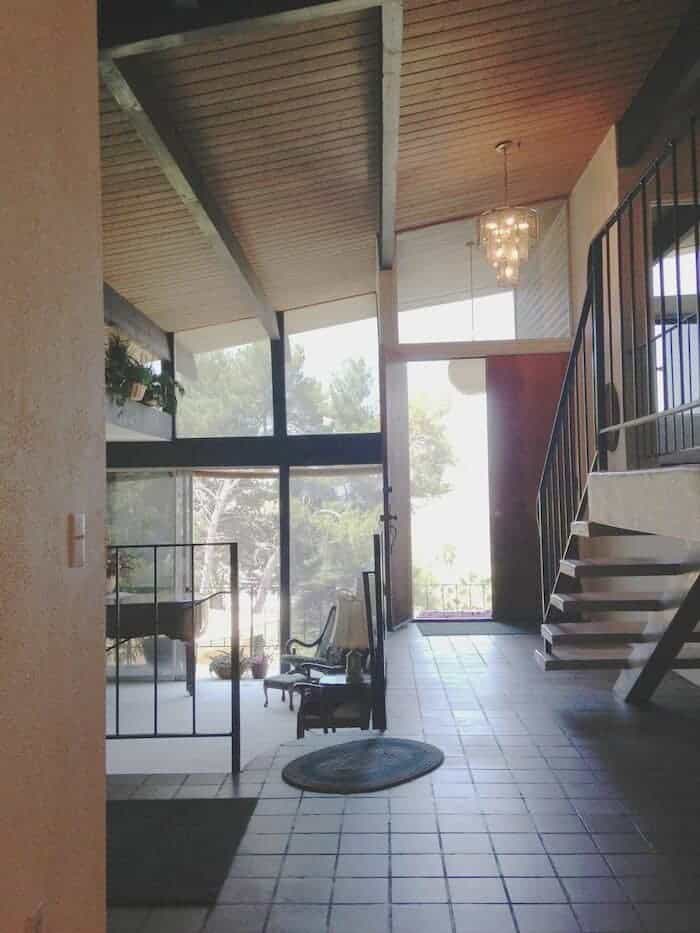 It’s on, folks. Casa Hendo is born. This post has already gotten ridiculously long, so I’ll reveal the bedrooms/kitchens/family room/bonus room, and outdoor area in other posts. You know, really get some mileage out of this.

Meanwhile, what do y’all think? Do I get the reader stamp of approval???

9 Comments
Oldest
Newest Most Voted
Inline Feedbacks
View all comments
Our sites use cookies to improve your experience. Learn more