Mormons are flipping trending right now.  Feck.  With Romney up for president, ‘The book of Mormon’ sweeping the Tony’s (last year and still sold out) and now Jeff on the Bachelorette possibly winning  (if she’s lucky, i love him so much), you might think to yourself, ‘Hey, maybe Mormons are not only relevant but kinda interesting’.

And then you might ask yourself, ‘do i know any mormon?’.  And the answer is Yes, you probably do.

I consider myself ‘bi-culturally mormon’ meaning that its in my blood as i was raised in a strict Mormon house, and i unvoluntarily subscribe to all the cultural loves that they have, but yeah, my lifestyle is different and i no longer attend.

But that doesn’t mean i can’t blog about it, because i blog about what i think and i think about Mormons a lot, so its my right.  (let me be clear that i know these are stereotypes and that clearly every person in the world is different).

I have a very good Mormon-dar where i can sense if if not feel totally confidant about identifying a Mo.  But for the laymen who aren’t so versed in Mormonisms’, here are 10 indicators to help you suss them out and perhaps become more like them….culturally.

1. They skip the coffee, and drink the diet coke. And by ‘some’ i mean fill up a 72 ounce double gulp bucket in the morning and sip constantly on it all day long.

I instantly think of my huge family, all of us with our matching big gulps.  It’s a thing – Mormons love some Diet Coke. It’s unexplainable, don’t even try, really.  Instead buy these cards that are really sweet, if you love diet coke, that is.  And make me smile.

3.  We watch and reference Broadway Musicals.  We/they are very musical. It’s partly genetic and partly because we start lessons really early (like 3) and constantly sing in church throughout our lives.  But the love for musicals is two-fold – a. since we love music we love Musicals, duh. And b. growing up you aren’t allowed to watch anything R rated (or at our house often even PG-13 were banned) so musicals are kinda the go-to for clean entertainment.

In fact in my family we were told that our VCR literally wouldn’t take rated R movies.  It just spits them out.  Because of this i’m constantly trying to get caught up on all the 80’s movies that most of you have seen that you all reference all the time and i’ll tell you what, they don’t stand the test of time.  I watched Top Gun two years ago for the first time and it kinda blows. Sorry.

But you know what doesn’t? Julie Andrews caring for 10 children battling Nazi’s.

S’right.   The Sound of Music.

There is also the racially charged West Side Story, sexually charged Oklahoma and comedically charged Mary Poppins in case you are anti-children wearing drapery as dresses which i am DECIDEDLY not against. In fact i’m very pro-that.   But i love them all very much and i know i’m not alone in this.

Total sidenote,  there is this movie that we all love:

Wait, one more… This is a strange one becasue there is no music (except the totally tear-inducing theme song), but somehow it is widely known as a family film for Mormons. I’ve blogged about it before, i tweeted about it last week, and this is not the last you’ll hear from me referencing the ‘Man from Snowy River’.

4. They ice block. Sober.  With the absense of alcohol or sex, Mormons are far more creative in finding fun then secular folk.  They also have to have inexpensive fun because yes, there are a lot of children normally involved.  So growing up we did a lot of this:

Look how fun that looks.  You buy a block of ice from the local grocer, go to a hill of grass, put a towel over the block and slide down whilst giggling.  $5 fun.  (just add wine).  I’m sure there are even more creative ways of having fun now (remember snipe hunts?), but this was a staple growing up.   So if you hear about a lot of adult games not involving the usual vices, its a Mo.

1. They Choose The Right and often where a ring that reminds them to do so.  You get at 8 years old when you are baptized and it looks like this:

Its our/their version of ‘WWJD’, but i like how its even more ambiguous and doesn’t reference a God – just encourages to do whats right.  Maybe its nastalgia, but i love the whole idea in general, as well as graphics and logo and color.

Check out this awesome pillow i found on Etsy.

Not for everyone, but i’m attracted to it.

5. They sport inspirational posters.   Growing up we had a TON of them in our house.  You remember them:

But now, there are a bunch i found on Etsy that are actually really beautiful and i’m sure inspirational for some.

HERE.   This might be a scripture reference but i know thats its part of a traditional Mormon hymn that is super beautiful.  And so is this poster.

HERE  And i have no idea if seculars understand this reference, but its another quote from a Mormon hymn that is burned into all of our brains and can be very powerful when all sung together.  But i also just like how they look.
6. They are crafty and resourceful.  I’m pretty sure that Mormons single handedly pioneered (pun intended) the modern craft movement. There is a distinct ‘why buy when you can make’ philosophy that is undeniably awesome, if not exhausting.  Part of it is financial (due to lots -o-kids), but most of it is about making life more personal and anything handmade is more personal. I’ve documented my dresses i made growing up for 4-h and i can decopauge the frick out of a mirror frame, but now there are a ton of new crafters doing beautiful things.
Get on the boat, er, ark with these books.

This one looks hip without being too ‘crafty’.

And this one is such a good resource.  Because Martha may as well be god in the craft world (and you may or may not have read my article on how she hires so many mormons, so check it out HERE’)
And undoubtedly i’ll include a book that i did with my friend Jen Gotch – she art directed and shot it and i styled a lot of it (although not all):

It’s a very pretty book, thanks to Jen’s vision.  (Jen is also the founder and creative director of Ban-do and a generally incredible person – the Mo’s love her, too)
7. They are modest.
It could be because i’m as pale as Powder (the 1994 movie icon as well as the loose stuff you put on your face), the fact that i think dressing slutty is cheezy, or it could be because that’s how we were raised – to not show a ton of skin, show restraint, not be to tempting.  I’ll go ahead and say that its at times too strict in my opinion, but there is something to be said for giving respect to men’s imagination.
And i’m not alone.
Kidding. You don’t have to dress like that. 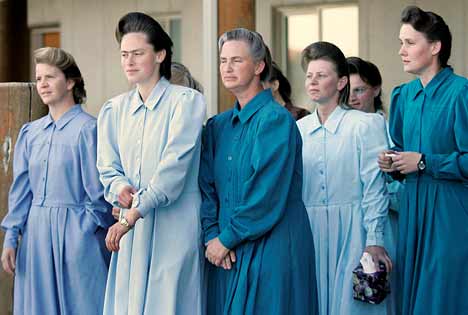 Instead take my friend Natalie Holbrook, of the blog ‘Nat the Fat Rat’ (one of two mommy blogs i read, the other being ex-mo Dooce.com).  She does Mormon  style that is modest but totally chic and on trend. (also she’s adorable so that doesn’t hurt). 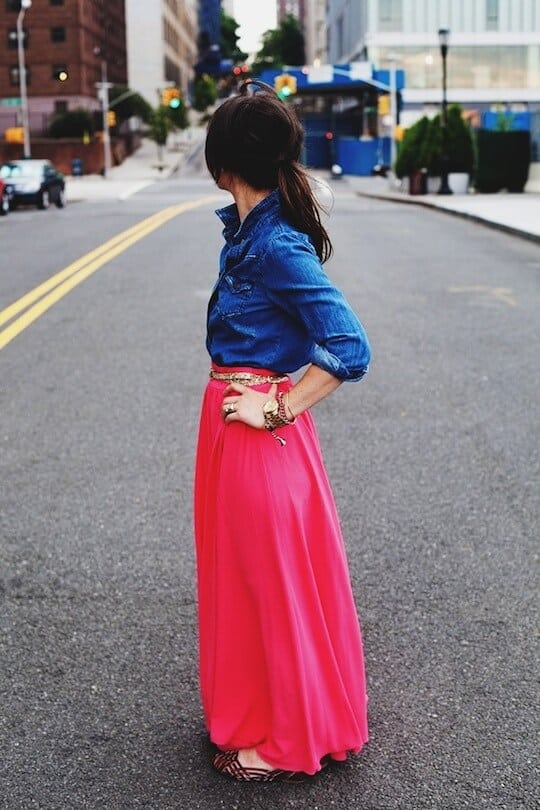 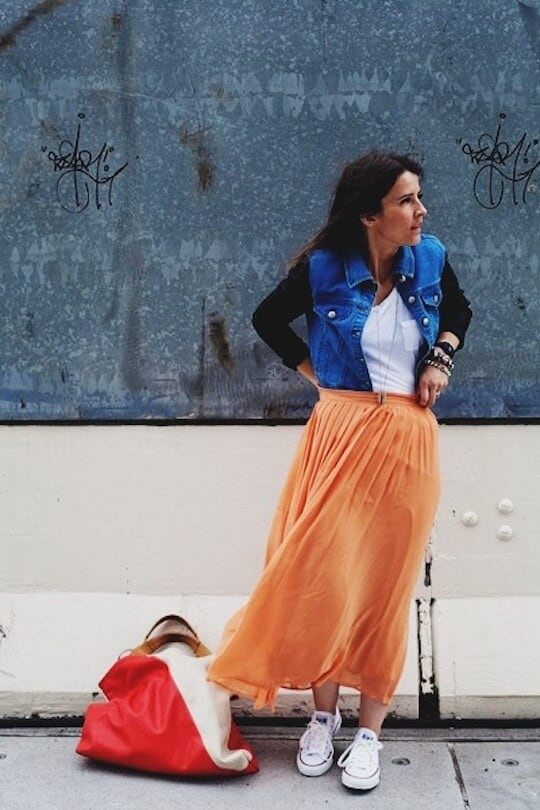 Shot by Rebecca Baust
I see no skin, yet i’d make out with her.  The rules are no strapless dresses and nothing above the knee, but ultimately its just to not dress like Snookie – pre pregnancy.  If they wear a lot of skirts and short sleeve white button ups (for men) then it could be Mo.
8. They journal a lot, or in other words, they write a blog.  Growing up we were asked to journal nightly and i still have all these journals which are INCREDIBLE to read. It’s probably the best cultural conditioning there is – to force this habit on your kids. What it does is create the habit of personal writing, but it also helps you write more personally in the rest of your life.  There are hundreds of thousands of Mormon blogs out there, some super personal and ‘out’ and some totally kept secret.  But if you start seeing the signs (aka this list, plus they reference kids when they are under 27) then you’ll start picking up on it.
9. They are strangely, yet genuinely, NICE.  Everyone hates being stereotyped, i know, but its just so true that the Mo’s are a really nice people.  I’m not talking about the church as a whole (although the amount of service they do for mo’s and non-mo’s alike is ridiculous) but the individuals are just nice people to be around. They laugh easily and apply the golden rule at all times.

So maybe you couldread this book:

10.  They wear magical underwear, have lots of kids earlier than most, and don’t make social plans on Sunday. But those are all the obvious indicators that you should know by now.
But if they drink their diet coke from this mug? You got yourself a Mo.

**Since this can be a sensitive subject i had two of my good active Mormon blogger friends read this and make sure its not offensive, so if you find this offensive in any way know that my intention is only to speak openly about a very interesting cultural subject because i think that the more people know about it, the less alienated they’ll feel by it.  Plus its fun to talk abou it.