A few weeks ago, I found out I was going to Alt Summit with Emily. For those of you who don’t know, Alt is a three-day conference in Salt Lake City for design and lifestyle bloggers. “Alt” is short for altitude, but it’s also code for “Alternative, ” meaning there are a lot of hipsterbloggers in attendance. Salt Lake City is kind of a crazy place for a conference, especially considering that the airport closed the day we flew in because an airplane was, like, doing 360s all over the runway. Thankfully, no one was hurt. Also thankfully, I wasn’t on that flight. Because if I had, I would never fly again. (I’m already a nervous flyer.) Here I am at LAX, minutes before our bone-chilling flight:

The terrifying flight was worth it. Because our hotel was beautiful and old and filled with history. Like your mom. It looked like this: 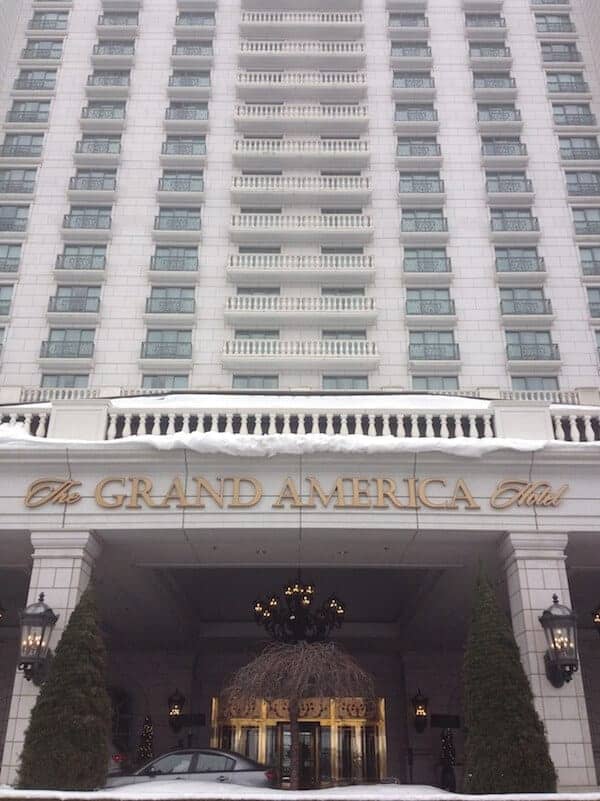 After settling into our room and playing with our hair and talking about our feelings for two hours, we were ready to party. 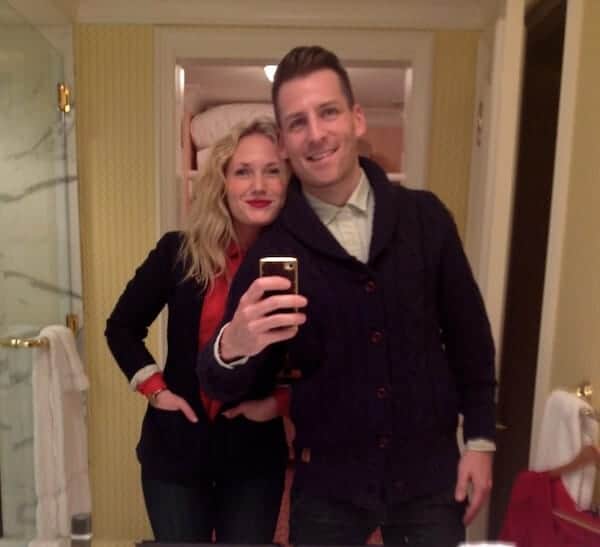 Alt had a million parties, one of which was based on the board game “Clue.” Everyone dressed in bright colors (i.e. Miss Peacock, Professor Plum, etc). The “Clue” party was the first party we went to, and the first thing I noticed when I walked in the door was that I was one of, like, 8 guys in attendance. Which was fun because ladies are more fun than men anyway. What I wasn’t anticipating was the everyone and their mom would be wearing crazy hats made out of flowers and chiffon. I had never heard of this before, but apparently these things are called fascinators. There was not a lady in the house without one. And they were all awesome. And terrifying. And awesome. 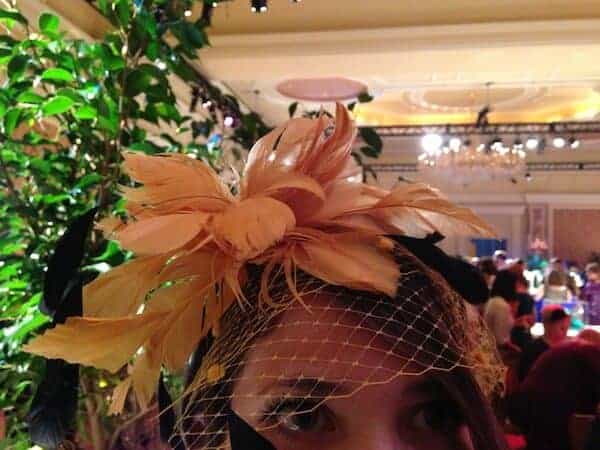 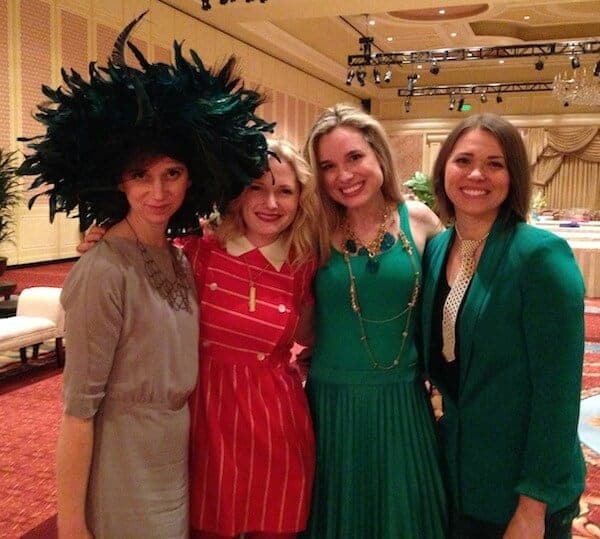 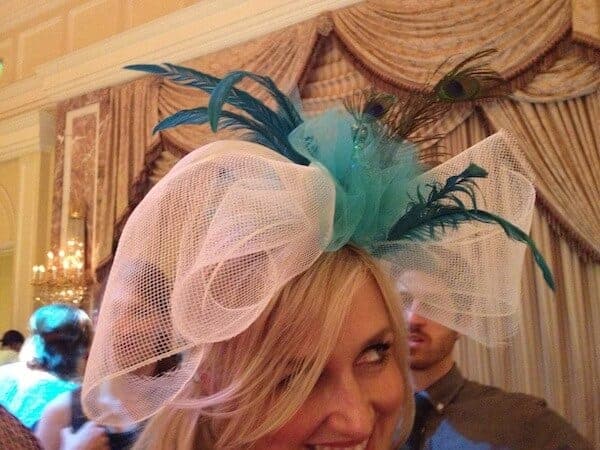 Of all the fascinators, this one fascinated me the most: 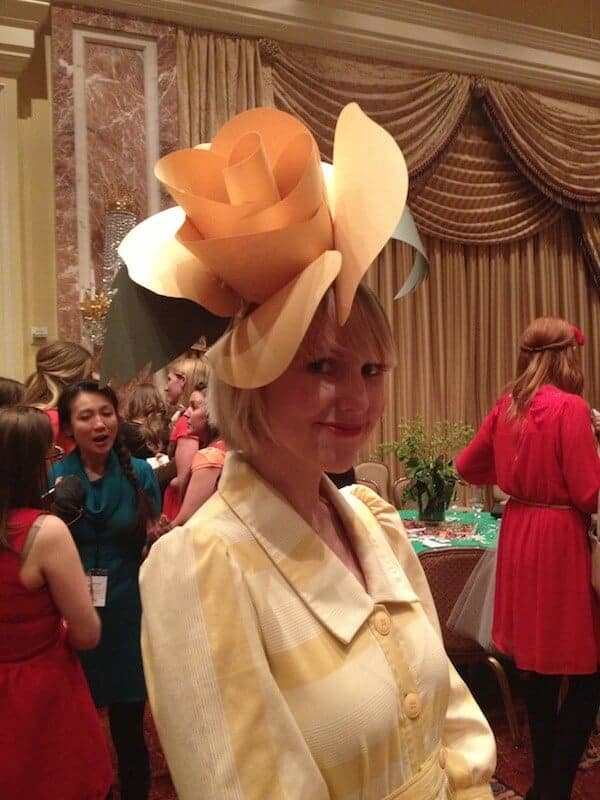 It was worn by the ubercute Brittany Watson Jepsen from The House That Lars Built. Here she is with Emmerz: 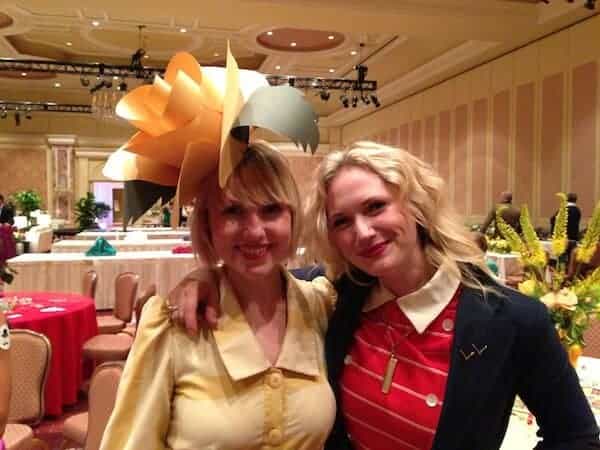 This cool cat dyed her hair to match the flower on her head. That’s dedication. 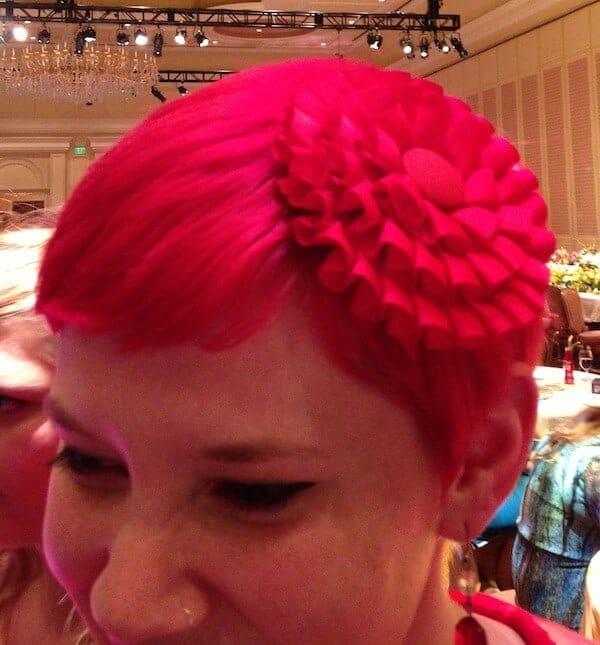 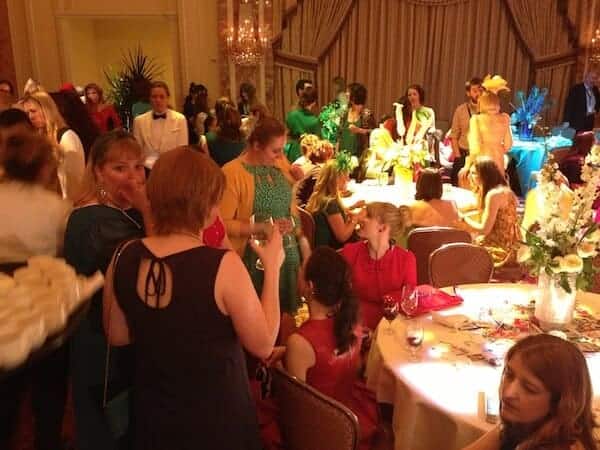 Oh hey look, another dude. The Man in the Yellow Hat. 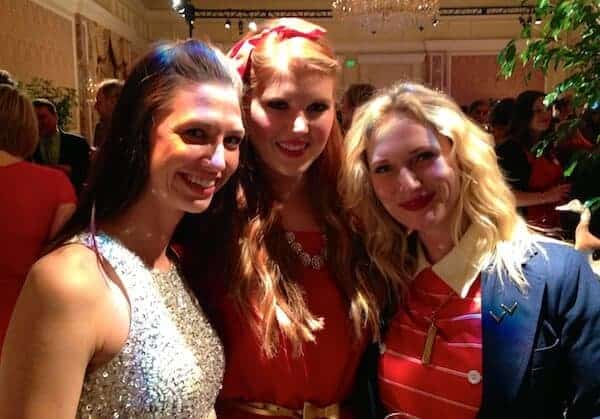 Because sometimes a fascinator isn’t enough, this lady showed up in a full on peacock mask. (Sidenote: what’s up with peacocks? Like all the sudden in late 2010 we all got obsessed with them and now we can’t calm down.) 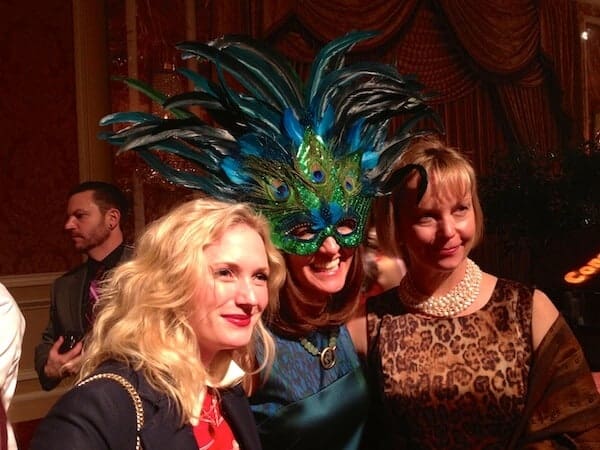 Speaking of birds, check out this luxurious giant swan that Land of Nod had shipped in for Alt. 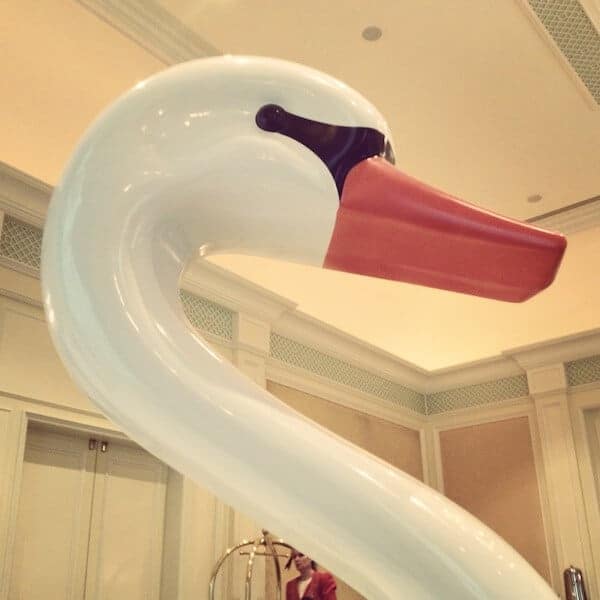 Naturally, Emily and I had to play in it. 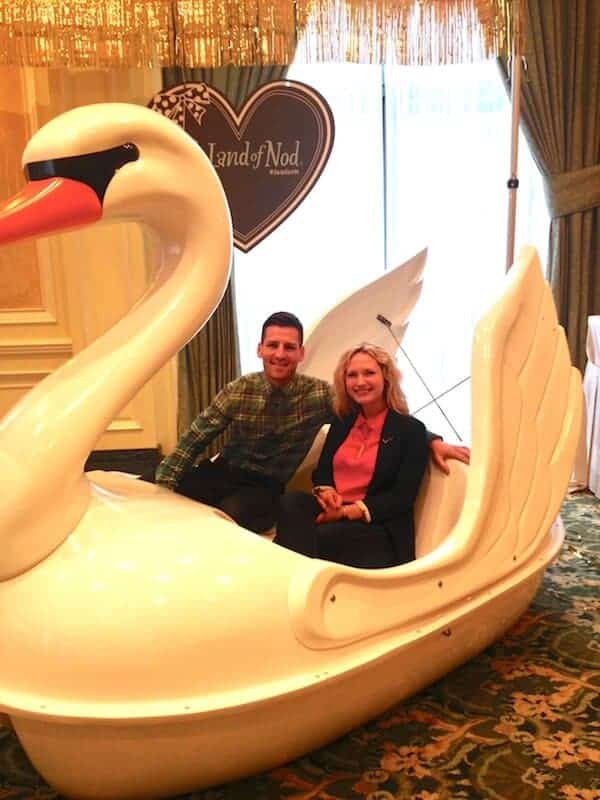 Emily spoke on a panel called “The Future of Design Online” with Heather Armstrong from Dooce. 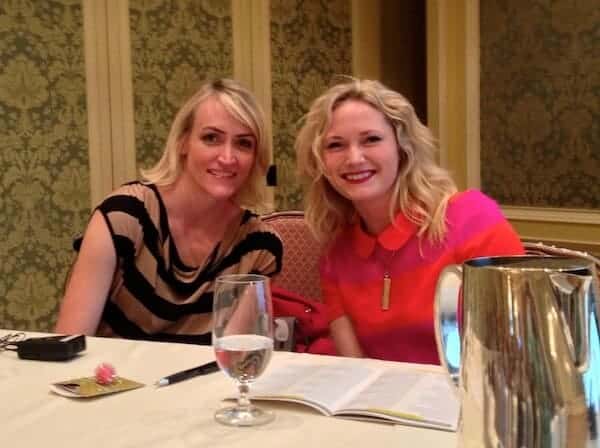 The panel was moderated brilliantly by (GASP!) a dude, Maxwell Ryan from Apartment Therapy. He’s a super smart dude and it was fun to hear everything he had to say about creating a sucessful blog. Also, since he was one of like 1.47 straight guys there, the ladies were on him skanky dresses on Jennifer Lopez. 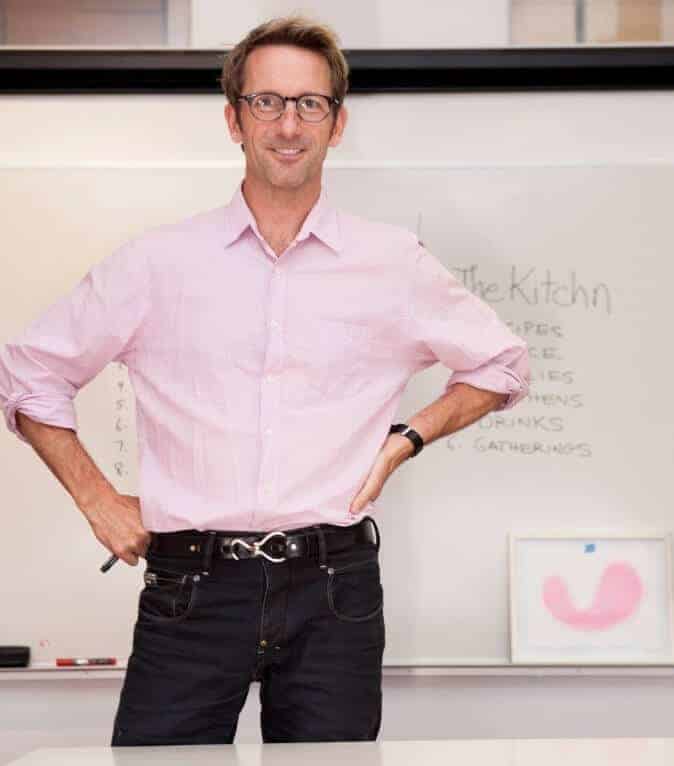 This lady was pretty awesome. You gotz to give props to anyone who can pull off an enormous Mad Hatter hat. 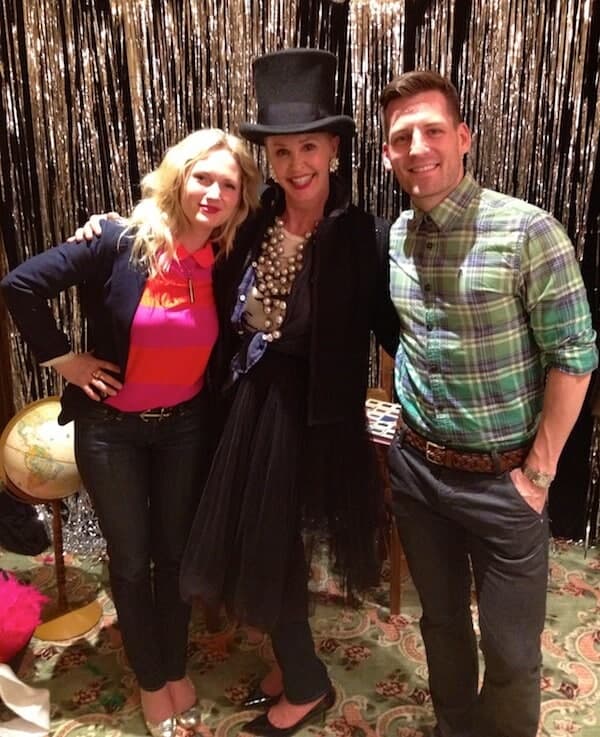 I wandered into a workshop that seemed pretty normal at first. Just a cute girl talking about bright colors whilst wearing flats with tights. 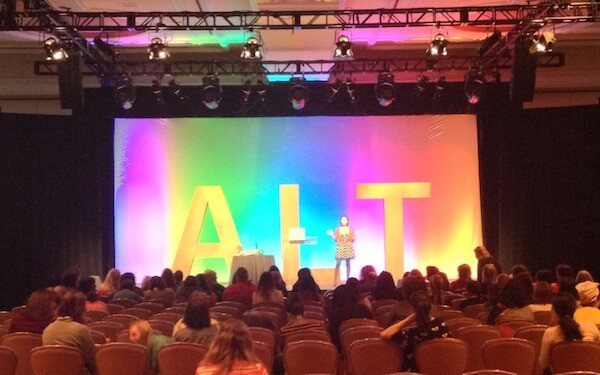 And then, like, out of nowhere a balloon fight broke out. Just imagine 200 pretty hipster girls throwing balloons at each other. It’s what I imagine Zooey Deschanel dreams about every night. 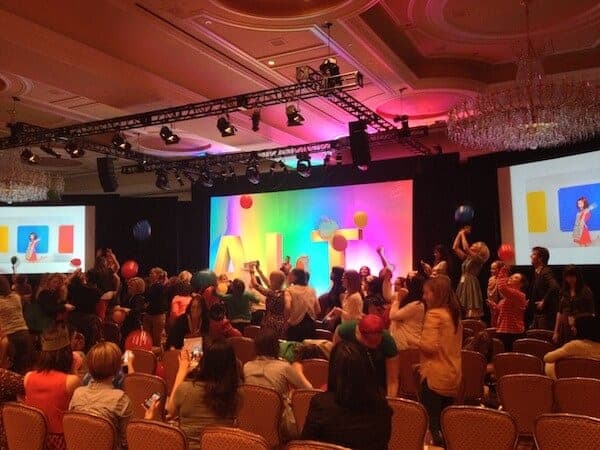 This is Anna Passadori,  a fantastic girl we met who is a product designer for Land Of Nod. We met their whole team, including their CEO and they were all intimidatingly hip. It was weird, this brand that designs cute stuff for kids is run by totally awesome ladies that wear cutting edge fashion and oversized beads. They were all super nice and super pretty and I kind of want to be them when I grow up. 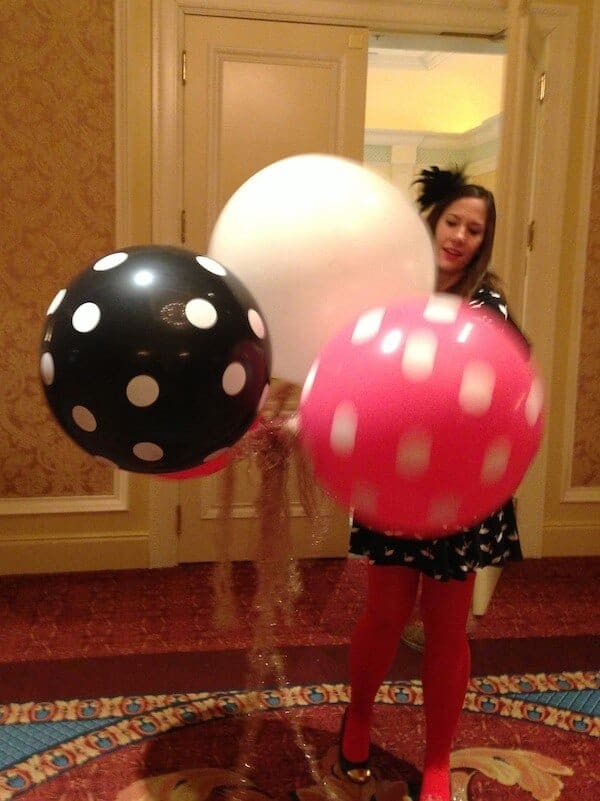 When you are one of very few men at a conference, it’s best to make new friends. For example, I made friends with more than one dirty martini. 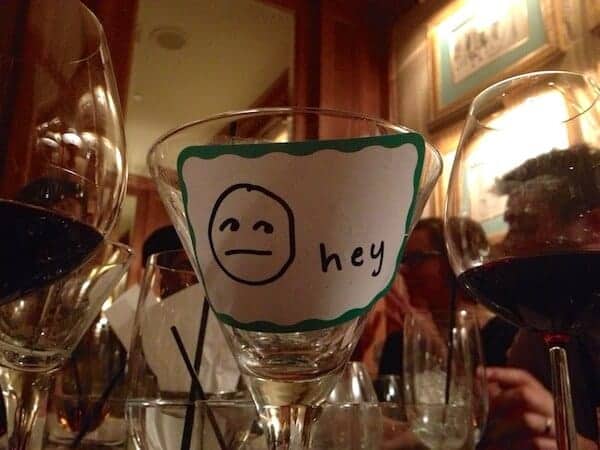 This girl was totally adorable, and one of many fans that approached Emily at Alt. It was pretty fun to be surrounded by so many people that recognized Emily (and sometimes even me!) from HGTV. Lots of friendly comments and words of encouragement, which we don’t get every day as we sit in the office together plotting whose house we are going to decorate next or how we are going to find the best vintage pieces to sell on One Kings Lane.

Alt was kind a of a crazy blur. You meet so many people and spend so much time gabbing that when you get home you kind of want to curl into a ball and sit in silence. The conference is super informative and super fun, and also like entering into a “Twilight Zone” full of cute girls that all know tons about style and are all perfectly coiffed. I’m actually kind of impressed with myself that I didn’t magically transform into a woman after being surrounded by all that estrogen and feminine fashion. Next year, I’ll make sure to bring a fascinator. At Alt, you’re nothing if you don’t have a strange and mysterious object perched on your head.