I spent last weekend in New York doing a big HGTV holiday marketing shoot, which was a total blast. I feel like i’ve been celebrating the holidays for months now between my holiday special that i filmed in August, and daily working on the holiday guide.  So going to a Christmas party in a red cocktail dress seemed perfectly normal.

I had met a bunch of the hosts/designers before at a party a couple months ago, but there were too many of them to really talk to and i was the newbie which gave me slight social anxiety.

So here’s the secret:  they are all a lot cooler than you’d think they would be.  I’m not saying you don’t think they are cool, but the point of the shows on HGTV aren’t to show how interesting and funny the designers are, its about the make over, the design – and most shows only have 22 minutes to show that in so what gets cut first is of course, the jokes in exchange for information.  So after two days i feel like i made some serious progress.

So lets start with Dina

She’s pretty awesome.  She’s really funny, snarky, and doesn’t take herself seriously, in fact is very self-deprecating.  In case you don’t know, she was a Real Housewife of New Jersey, but gave it up to do Dina’s Dinner Party on HGTV.  Sure, we have different styles, indeed, but she’s awesome, sweet and so involved in charity work that it makes you feel like a lazy POS. In a good way.  Plus she has hairless cats and makes no excuses for them. One is named Grandma wrinkles (who you can even follow on twitter). 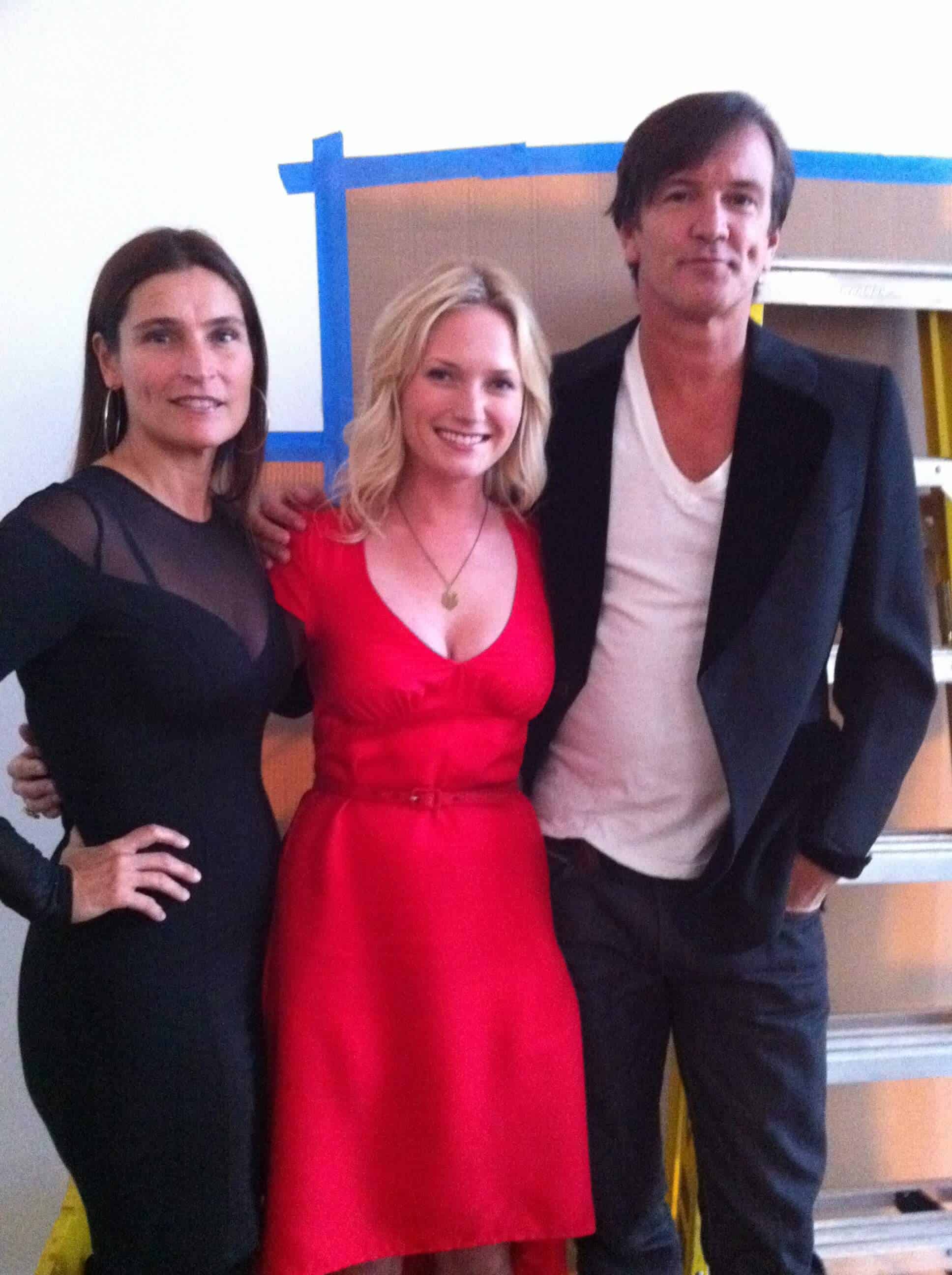 Me and the Novogratz – who are awesome in every way.  I loved their show on Bravo, 9 by design, and i love their new show on HGTV, Home by Novogratz. They have 7 kids in New York City and are so lovely and engaging you wouldn’t believe it.  I could tell they were nice from being on TV, but it was refreshing how excited and genuine they are.  They do crazy awesome designwork and clearly have such a fun time doing it.  They live their life exactly as they want to, and its totally inspiring. 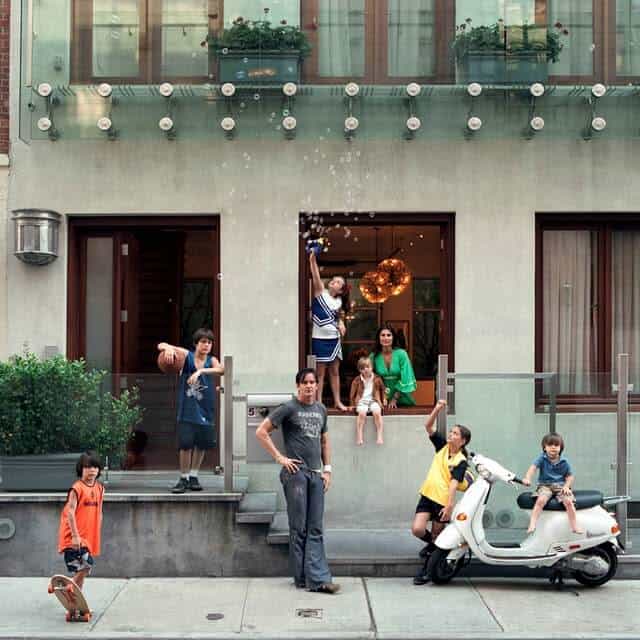 Those are their kids. They are all adorable, friendly, well-behaved and totally independent. They make a good case for raising kids in the city.

Then there is this dude, Antonio. As you know he won season 4 of design star (i call him ‘season 4’) and he’s an enormous teddy bear that gives such good hugs, and drops the f-bomb 20 times a minute. Its hilarious. We are seeemingly very different, yet we have so much in common – we both won Design Star, we both live in LA but used to live in New York, both learned how to design on the job as opposed to school, both of us were set designers and prop stylist for photography, not interior designers, both love vintage and crazy sh*t).

And then there are these four – The Kitchen Cousins and The Property Brothers.  All four insanely crushable, although a bunch of us girls played the ‘team brothers’ or ‘team cousins’ game (a la jacob and edward) and it was evenly split.  I haven’t decided which team i’m on.  I mean look at all of them: 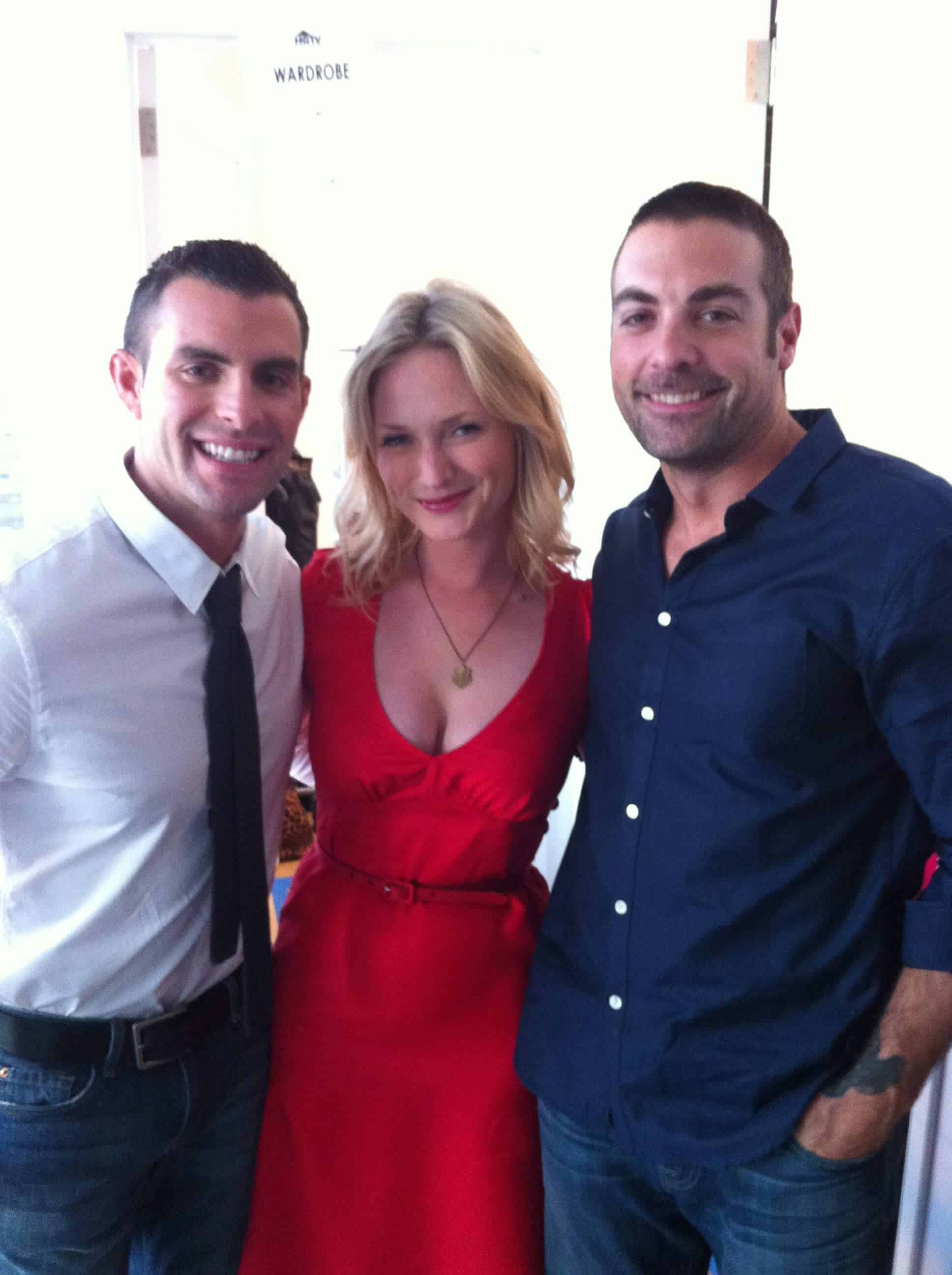 The cousins demo and reno kitchens, and yep.  There show starts soon, its not on yet, but i’ll be watching or at least telling people who have kitchens to watch. 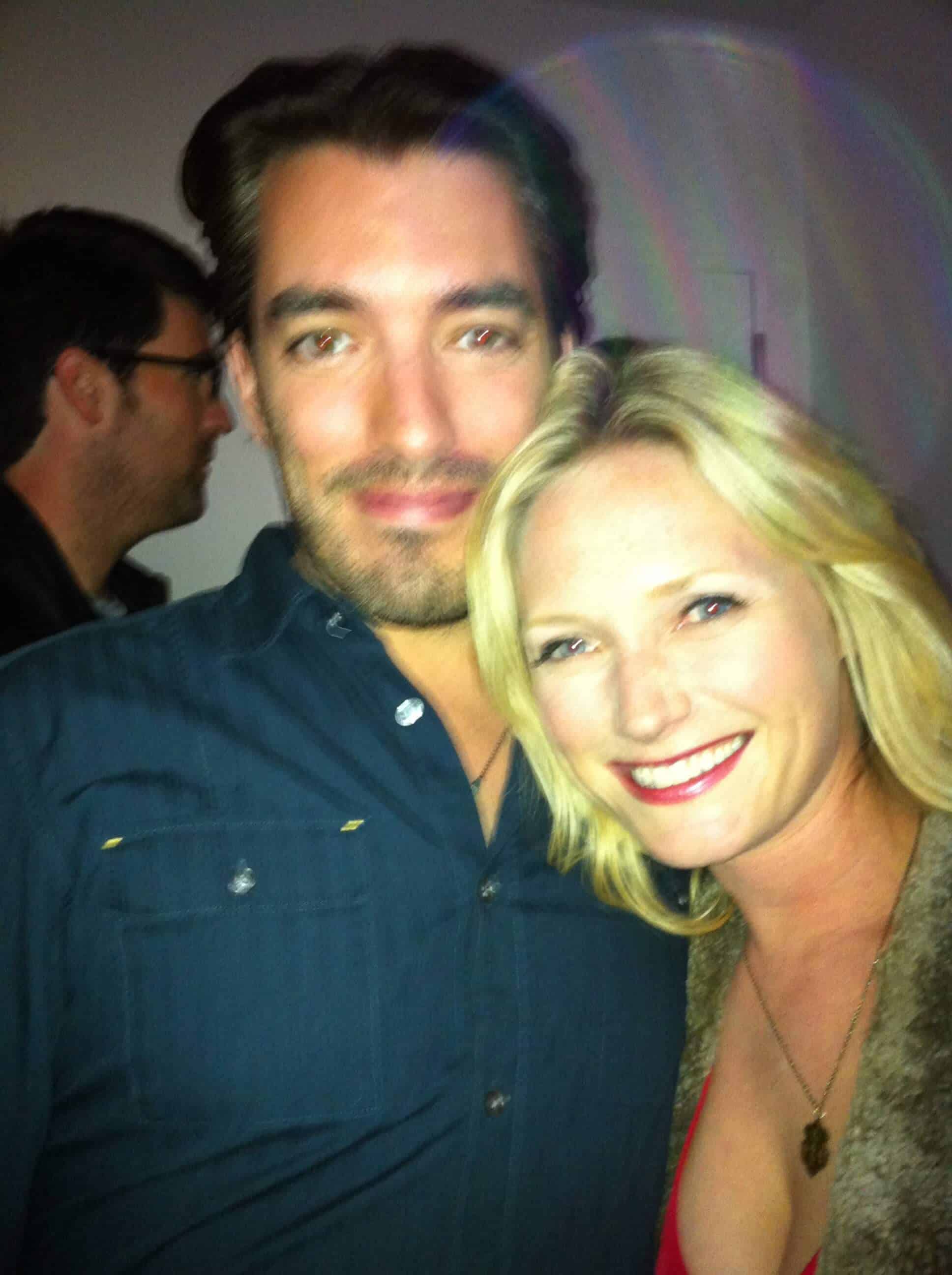 Here i am with one of the Property Brothers, Jonathan. I think (and i’m pretty sure Brian will officially not love this picture).  Their names are Jonathan and Drew Scott, they have been acting since they were seven, producing since like 9, and Jonathan is a kinda famous illusionist – totally weird renaissance men.  They split up the show so Drew does the real estate part – he finds the house, negotiates price, etc, and then Jonathan comes in and renovates.  They seemed too good looking to be cool and smart, but indeed they are both very good looking and super cool.  And they are 6’5″.  I haven’t watched their show yet, but no wonder they have such good ratings. 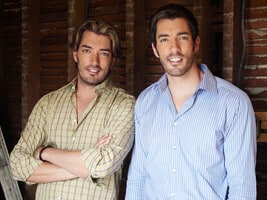 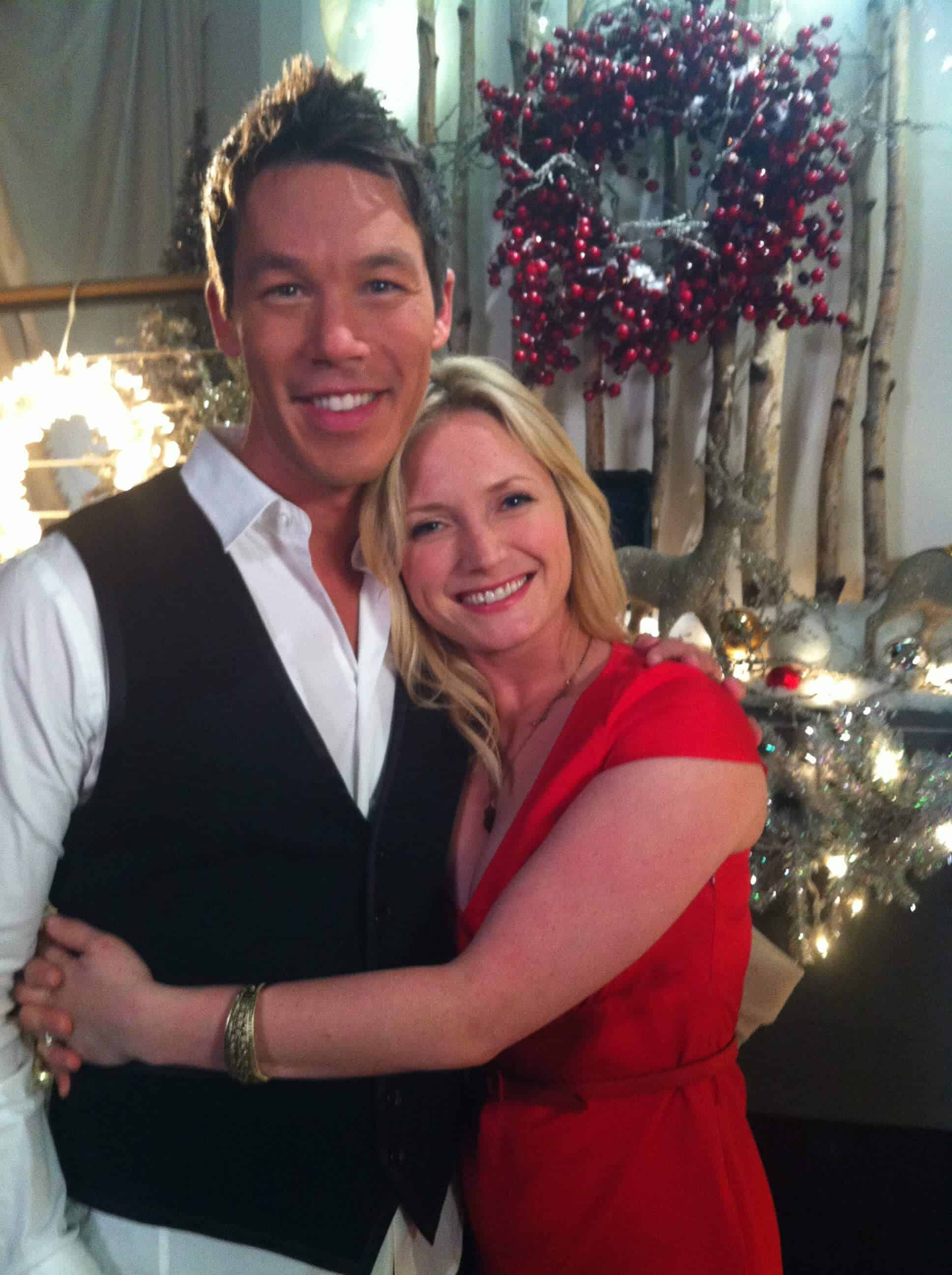 And not sure if you have heard of this guy, David Bromstad, but he is the Original Design Star.  Number uno. And he is extremely popular for so many reasons.  He is super fun to be around, very generous with information and advice and easy to laugh – you feel comfortable immediately around him.  And he wears these shoes, without irony, not in a costume, just because its thursday:

In case you can’t tell what they are, they are rhinestone encrusted Dolce and Gabbanna high tops.  I was speechless. Sometimes i want David and Antonio to switch outfits and see what would happen. 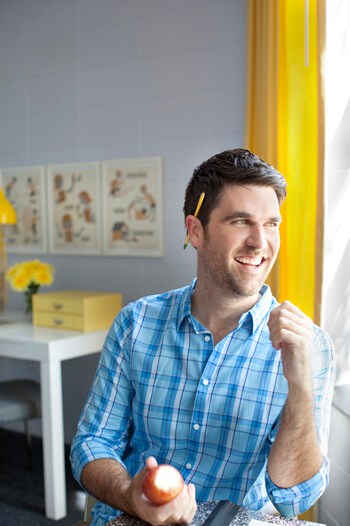 This was my boyfriend for the weekend, Brian Patrick Flynn, otherwise known as Decor Demon. BPF has been in front of the camera but now he’s like a crazy made producer/blogger/designer – kinda everything and works a ton for HGTV.com as well as producing some of their shows.  We met online because we are fans of each other, we share some mutual friends and having him there last weekend made it so much easier.   A lot of the hosts i’ve seen on TV forever and they know each other really well, so having someone else who is kinda newer to the network was helpful and comforting. He was like a social blanky. And he’s hilarious.

And who doesn’t love some Genevieve.  She was only there for a couple hours, but she is extremely lovely, open and as kind as she comes across on TV.  I think it will take a bit longer for me not to be slightly on edge around Gen, Candice and Vern – Design Star judging scars take a while to heal – even though Gen was always extremely fair and nice.  I think it was just the environment of the stage/lights/heat during elimination that kinda brings that fear back.  Meeting them as ‘civilians’ helps soooo much. 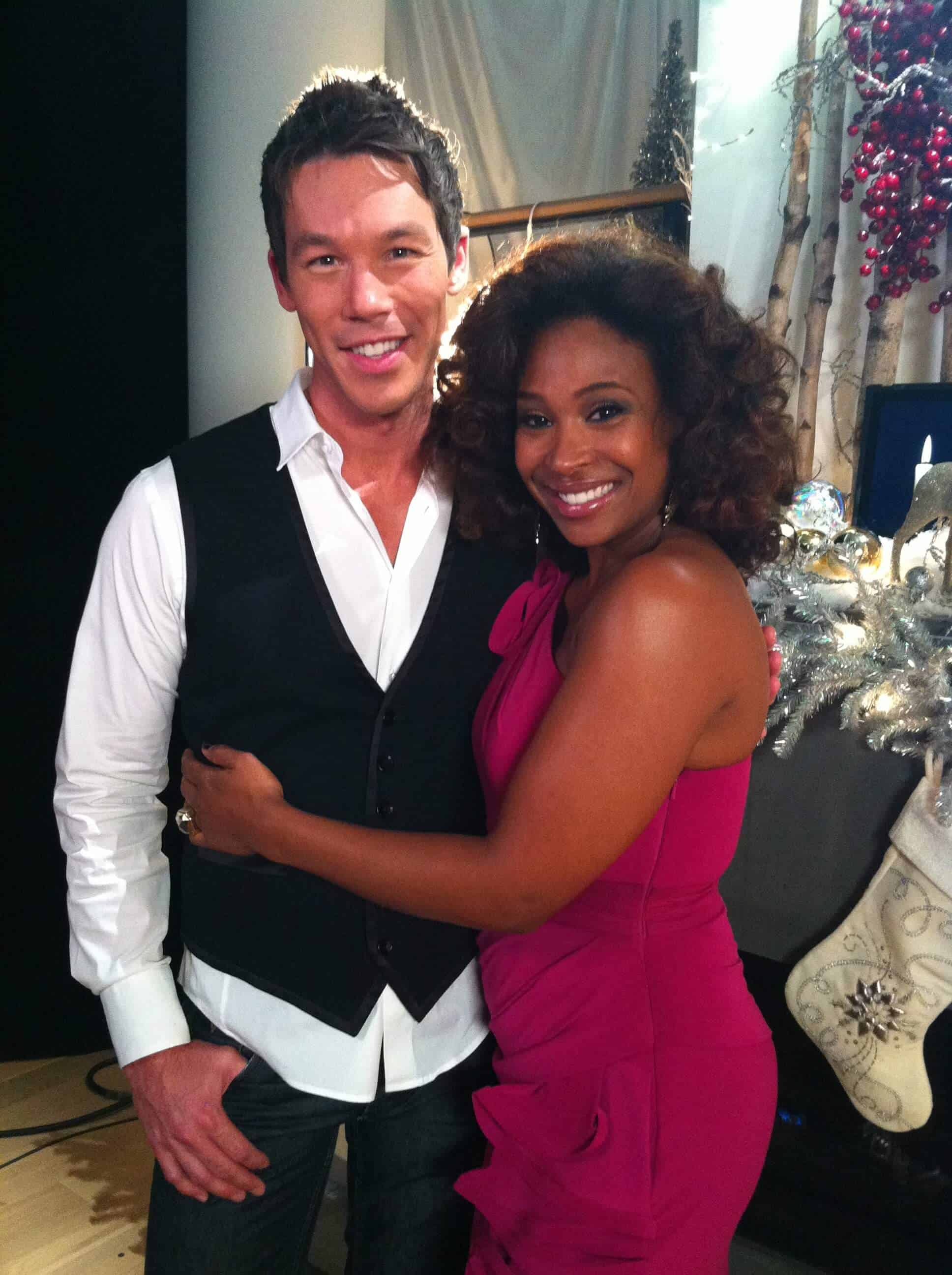 And Tanika Ray, who i met during HGTV’d but got to spend lots of hair and makeup time last weekend.  She’s totally fun and engaging, and she and David together are ridiculously hilarious.

Thom Felicia was there, but only for a couple hours so i got to meet him, but no crazy conversation – although he did say that he was a fan of mine which made me feel ridiculously good. 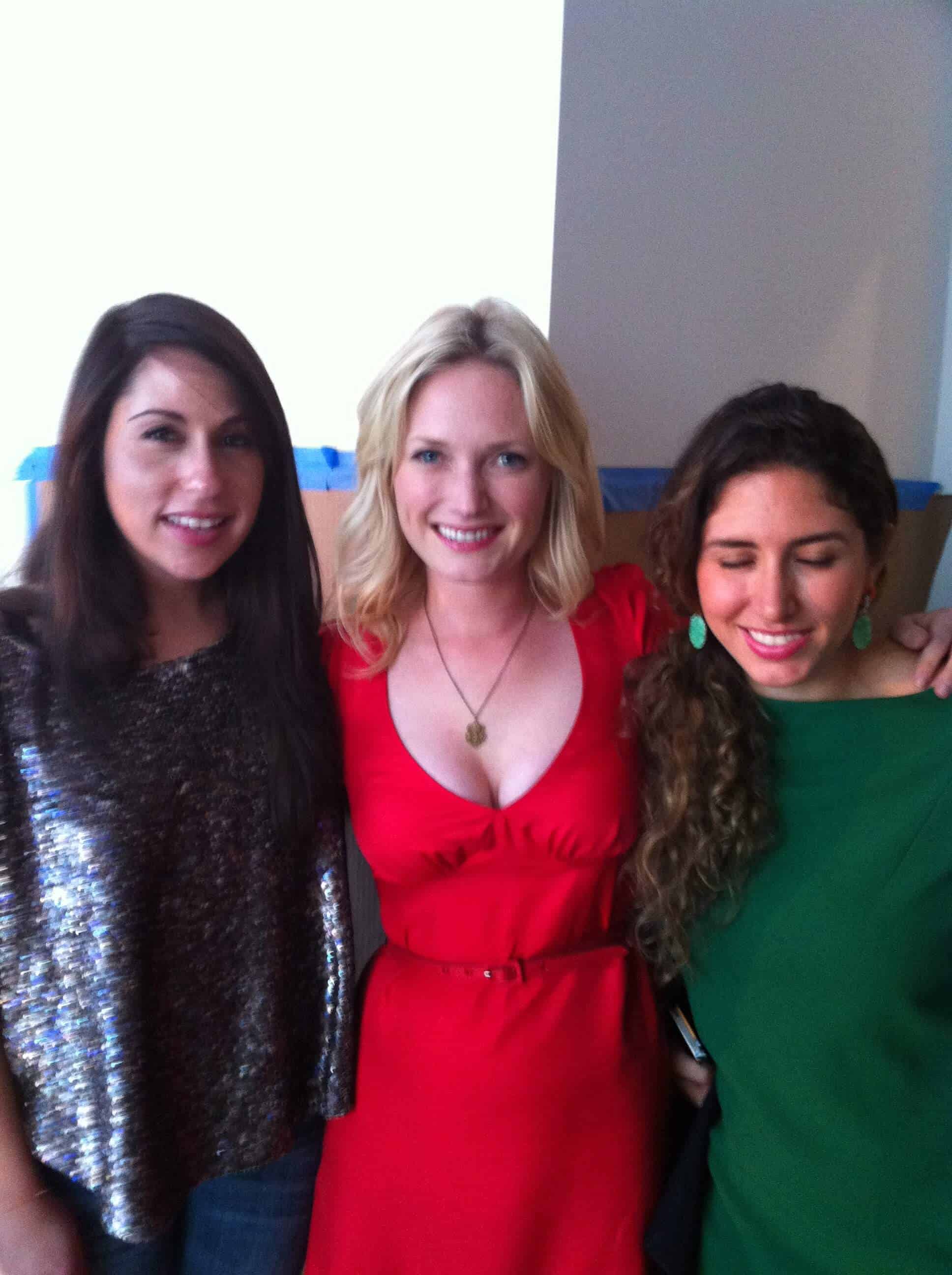 That’s Lindsey on the left (from HGTV and has the blog, ), Nicole (Nic, are you sleeping in this photo…sorry i didn’t have another one) from Sketch 42 and not pictured was Jeanine from AphroChic, Erica from Design Blahg, and the next morning i met Susan from House of Brinson.

All in all, a super fun weekend with the HGTV family.  I will say this:  getting to know these other hosts and designers makes me love their shows more.  I think one of the reasons i love Rachel Zoe and Jeff Lewis (Flipping Out) so much is because i feel like i know them – you see so much of ‘them’ in their shows – not as hosts, but as people. I know its a totally different format, but i attach myself to people before i do their designs (Jeff Lewis and I have TOTALLY different styles, but i can’t get enough of him).  I guess that’s one of the reasons i keep the blog so updated, i know that you don’t get a too much from 22 minutes once a week on TV, and this blog supplements that.

So my friends, what are your favorite HGTV shows? Who do you always watch and love? Who do you want to see more of? If you read this blog often i’ll assume that you watch/like ‘Secrets’, but i’m curious what other shows you love.  This isn’t me begging for compliments – although i certainly won’t reject them……

Who will it be?

(and nothing cruel….keep it positive or constructive or i will cut you, figuratively)