It was a religious experience finding this chair.  Sure, i see Milo chairs all the time, but not like this.  I felt my design soul being massaged by mid-century angels, i could hear the melodies of thousand young tenors from the 1970’s.  It was magnetic, magical and totally me.

I spotted it first, nay, was drawn to it first but was with my friend who is pregnant and she needs a rocker so i insisted that she buy it.  She loved it as much as i did otherwise OF COURSE i wouldn’t have relinquished this beauty to someone who doesn’t appreciate it. Please.

Naturally i regreted giving it to her, but the good thing is that she lives and is very close to me, i’m over at her house at least twice a week, so i can visit it, sit in it, sing to it, whatever.

It’s the most beautiful color of brass i’ve ever seen in VERY good condition.  The fabric is fine, but its worn and kinda dirty and could use an update, for sure.

But its just so unique and beautiful.  I’m obsessed with it and will regret not buying it for the rest of my life.

Two adorable yellow tufted chairs.  I want to strip them of their skirts and style the hell out of these guys.  So great. But i didn’t buy them because my garage is full of other amazing vintage finds for my One Kings Lane sale, so i’m not allowe to hoard until I get rid of some of these things.  Besides they were both for $350, which isn’t terrible, but they were really faded so needed to be reupholstered which would add at last $600 with fabric.  Not bad, but not a steal enough to hoard. 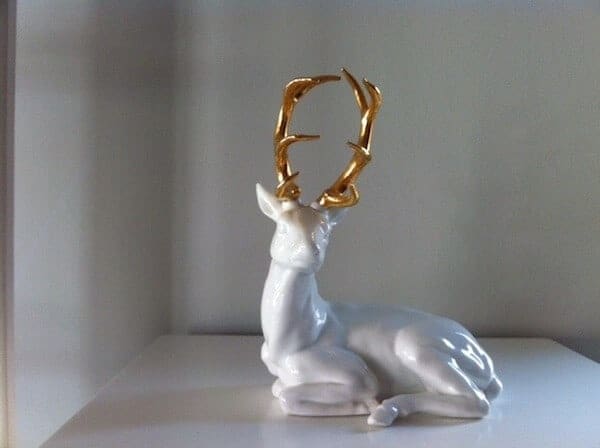 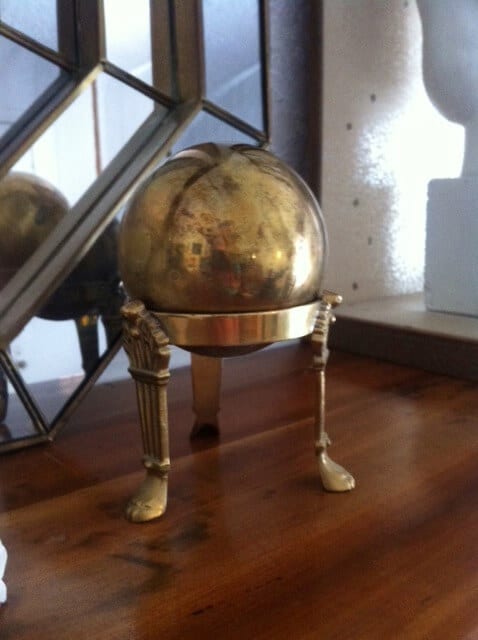 Little gold ball on a little base.  Great score for $10.

That’s nice and all but what about my new painting? 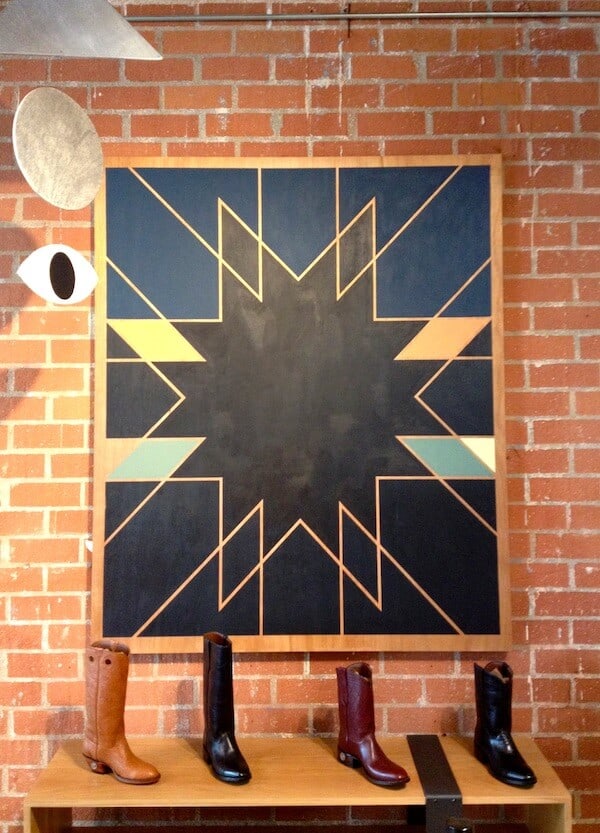 Strangely enough i have 3 of these paintings from this artist, from the same dealer at the flea market.  I love how they are abstract, yet still portraiture.  And the colors are ALWAYS me – tons of blues, greys and saturated tones.  They feel timeless, yet were painted in the 60’s and 70’s.

Anyway it large, like 40″ square and its going to go in my bedroom above my dresser, instead of this painting which is WAY too hot pink for Brian to handle in the bedroom:

That painting by Orlando is probably going in the bathroom. I’ve actually commissioned another one from him for above my bed because i love his work (he did this one in 5 minutes and doesn’t count as ‘his’ work, although, i do like it). I told him to do whatever he wanted within my color palette.  I’m very excited. If you don’t read his very entertaining blog already you should.

Saturday afternoon i told Brian i was hiking with Corbett when instead i accidentally went to meet a Craigslist seller about some rugs: 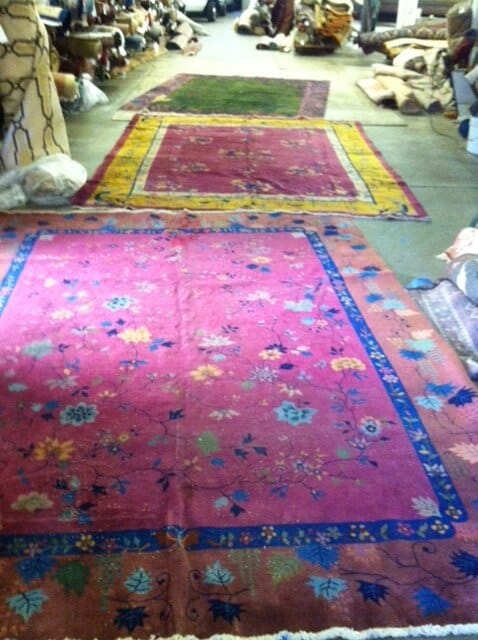 It wasn’t a lie. We really had intentions of going on a hike, but i just had to see these in person first. Three art deco chinese 9×12 rugs from the 1930’s, owned by Bette Midler in the 80’s.  I’m not kidding. 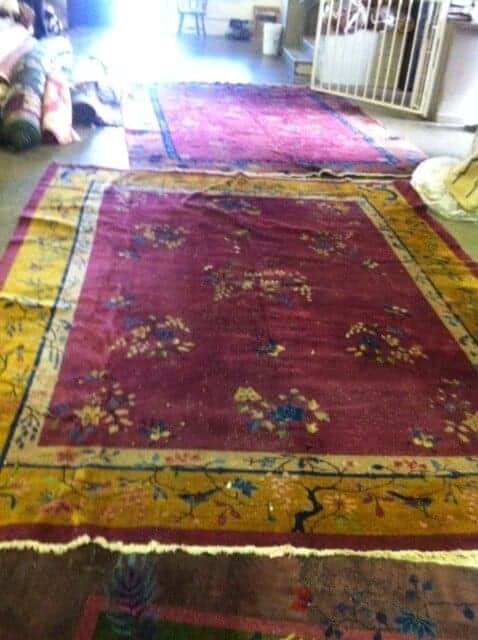 This one looks more purple here, but its a pretty saturated pink, although closer to wine than red.  I saw it on Craigslist last week before i left for New York and tried to see it, but it wasn’t a priority so i never made it.  I was so happy and relieved that all three rugs were still available and the price had come down. 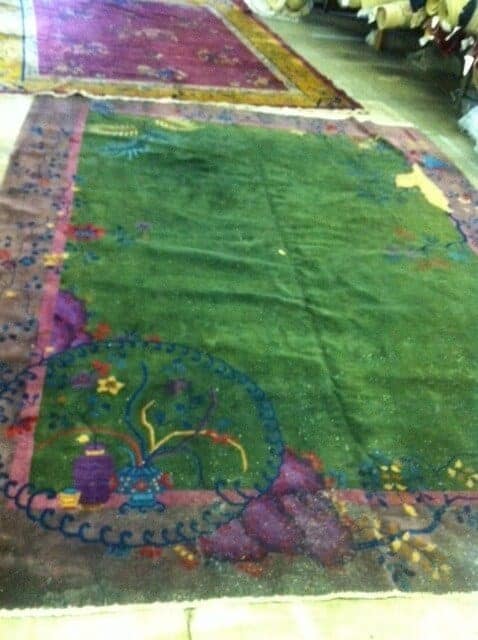 I felt like a massive hoarder, or more precisely like a rug addict. I actually don’t need ANY of these rugs, let alone three. But the one that i wanted was the first one and she said that if i bought that for $500 i could have the other two for $100 each.  $700 total for three 9×12 antique deco rugs.

She made me a offer i couldn’t refuse.  They all need to be professionally cleaned which does cost around $240 each so when i go to resell them (which i will because guess what chicas? i’m opening an online vintage store) i’ll have to calculate that price into it.

Meanwhile i’m hoarding three 9×12 deco rugs. I was sure Brian would commit me.  He would do it lovingly, and probably come and visit once a week at the crazy house  He’d probably bring me a photo album of all my favorite things so i can flip through pictures of each piece, admiring them, like one might their children whilst in prison. There was no way he is going on in life thinking i am stable. I bought not one, not two, but three unnecessary antique deco rugs, with cash, to a stranger in the middle of a September Saturday in South Pasadena.

Please show support and convince Brian not to commit me by commenting whether you do or don’t think i should have bought those rugs.  Please.