Eight years ago my Sunday mornings included riding the subway home after partying all night until 5am, passing out in my crappy 1 bedroom, to potentially not awake until dark.  I had an insanely fun twenties, a bit reckless at times, but crazy fun.

But now, my Sunday mornings are watching the sunrise at the flea market.  And I couldn’t be happier.  I was there before the crowds, before people completely set up shop and before the sun created the 90 degree heat, which was todays.  I was by myself, which is the best way to shop – I tend to take more risks when my friends, who already think my style is a bit nuts, aren’t watching and asking, ‘why?’ when i buy a gold crushed velvet sofa with the sickest lines i have ever seen for $150….

Allow me to indulge a bit in my emotionality…ness.

I remember one of my happiest moments in New York was when I had just moved in to an apartment by myself in Spanish Harlem. Brian and I broke up for a year, I was 24 and on my own.  I was walking dogs during the day, bartending at night, taking classes at Pratt, etc and I felt like life was getting really really good.  I know that sounds ridiculous, but at the time I felt like things were coming together.  I felt young and motivated and so lucky to live in the best city in the world.

One day I was walking dogs on the east river,  the city looked extra beautiful that day; it was fall, all the leaves had turned all these insane oranges and reds…ah… anyway, as i was walking Casey and Misha (a lab and terrier) I stood in Charles Schultz park on the Upper east side and started crying because I was so so happy.  Just a little bit of crying, not a weird ‘why is this girl weeping’ situation, just a few happy tears.  Was I emotionally unstable?  I don’t really think so, just super sentimental. And genuinely happy.  p.s. i’m a cryer.  i cry a lot. it sucks.

Anyway, I had my LA version of that feeling today. I watched the sun rise at the Rose Bowl, coffee in hand, feeling really happy and strangely grown up, in a good way.  I’ve adjusted to LA (after many tears and years) and now, lo and behold …. I am super happy.  Maybe it’s an age thing.  My 20’s felt awesome and super fun, but my 30’s are feeling right.

So here’s a bit of what I bought.  I don’t want to spoil too much from the show, but here’s a taste:

Awesome shape.  Both for $350.  Not an insane deal, but a good one.  They look modern and simple, but are vintage obviously, so they are still super unique.  They are super comfy and large in scale (which the men keep requesting) They will have a facelift by the time you see them. 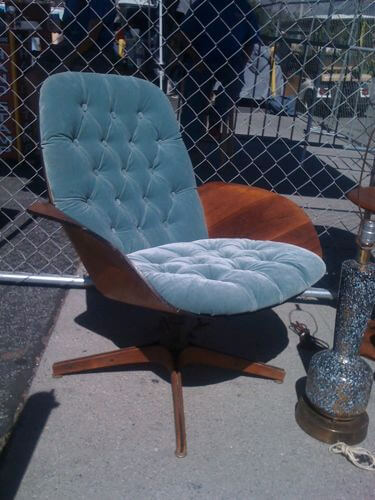 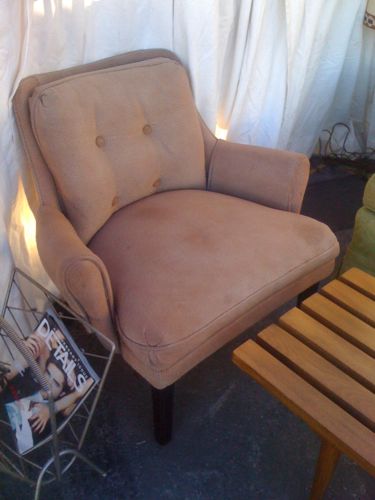 2 of these.  Super cute. Small and with some interesting detail which you can’t really see.  $50 bucks a pop.  I’m assuming that reupholstering will be $150 –  each, so they’ll end up still being inexpensive good quality chairs.

I bought some smalls, but they are still packed deep within my car – i’ll take pics tomorrow.  Along with a Milo Baughman chair and 2 sofas.  yep.  Don’t worry, when they reupholster they strip down everything, all the foam and batting is new. Vintage pieces just have the best lines and ultimately are cheaper and more interesting than current retail.

In other flea market news, I ran into Antonio (who I had never talked to off camera, we exchanged pleasantries on camera on DS, but have never really hung out) which was awesome.  And then my friend (and this years DS third runner up) Casey joined me.  So it was a big DS HGTV reunion.

The bad news is that I got super burnt.  Antonio’s friend (and coworker on the show) reminded me that i was butt-a** white, and should probably reapply lotion.  But I didnt’ have any.  So now i’m all about the aloe.  Sucks.