Alright.  Lets talk Modern Urban beach.  First of all i’ll tell you that these kids are my friends and that i actually lived in that guest house for 6 months when we first moved to LA.  The reason i said it was ‘fancy’ when i walked in was because they had completely renovated it – new flooring, kitchen, clean paint, etc, so it did look much much fancier.  And i love this space, its all open and airy and bright.  When i lived there there was white wood paneling which i LOVE, but it wasn’t insulated so they had to add drywall, etc.

The style diagnostic was funny because Josh is a total ham. And by ‘ham’ i mean, hilarious and couldn’t get enough of the camera.  He was totally mugging.  Where Josh and Sarika are from has a huge part of what their individuals styles are and unfortunately most of that got cut, so you didn’t find out that she is from Hawaii and he is from Brooklyn and Queens and she moved out here for the beach and he moved out here for her (and the lifestyle etc, ) but misses New York, which is why i brought in so much New York stuff.

Sorry, i took these pics and they are bad.  Things weren’t totally styled yet, i was just taking them for reference but then i realized they are the only ones i really have.   The coffee table i got from Mix, i think it was $695.  It’s on La Brea and is awesome (you guys might remember me shopping there for the pilot episode). I rented the daybed there too. This was a case of ‘how can i show the audience something different, but have the client not really want it so they like the second look more’ scenario.  (we don’t have that problem anymore, with the one look new situation for second season, yeah!!!) So i figured no one really wants a wood sofa in their tv room.  I love this piece and want it outside under my pergola in my figi summer home, but not in my tv room.  I shopped at Andraianna Shamaris for the first look.  It’s a store in Malibu and New York and is awesome.  That brass and leather cuff i wear all the time is from their as well.  They have great global pieces, but pretty high end.  This table was around $1000 i think, and i knew it was just a first look rental because we couldn’t afford it. 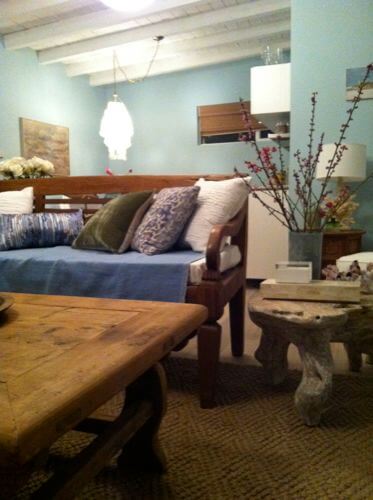 The rug was West Elm, i think, , natural jute. The boxes are west elm, target and the vessel behind was from HD Buttercup.  The lamp behind that was left over from Antonio’s show and i think it was from Pier One. Pillows are West Elm, Urban OUtfitters and CB2.

OK, gotta run.  Sorry i didn’t link. will do tomorrow.

172 Comments
Oldest
Newest Most Voted
Inline Feedbacks
View all comments
Our sites use cookies to improve your experience. Learn more