Yes.  The world has now gotten to see the hilariousness that is Bob and the adorableness that is Joy.  It was such a fun episode and style-wise i think that its one of my favorites.  (second look, not first)

Here’s how it all went down.  I met them a month or two before shooting, we’ve known about eachother for a long time, but we had never officially met until the show (no nepotism here, people, trust me).  I was super excited but a little wary – i mean i knew that she has good taste, and that Bob has LOTS of opinions which really does make your job harder.  Designing for a designer is tricky.  And joy’s style is nuanced – its clearly not just ‘look one’ and that was the problem. She loves vintage inspired but more modern, graphic and she is girly but not in the over the top frenchy kinda way that it turned out to be.  But being complicated isn’t necessary good for the show because it needs to be 2 clearly distinct looks.  The first style can’t be a combination of styles already because it will be a bit confusing (and people are already confused about the two looks) to the viewers.

At this point I hadn’t done a super over the top girly room, so while it wasn’t totally Joy, it was kinda necessary for the show and fun to do and see.  Keeping the episodes fresh and each style different for 26 shows is really really hard. I knew i could take her wallpaper and use it as the inspiration to girl the heck out of it.  (and yes, i’ll get to the wallpaper situation later).  I’ve said it before and i’ll say it again and again, it is so hard to make look 1 really good, but not so good that there isn’t a reason to do look 2.  So going over the top with it is super fun, but then people are happy to see it taken back and made more liveable. 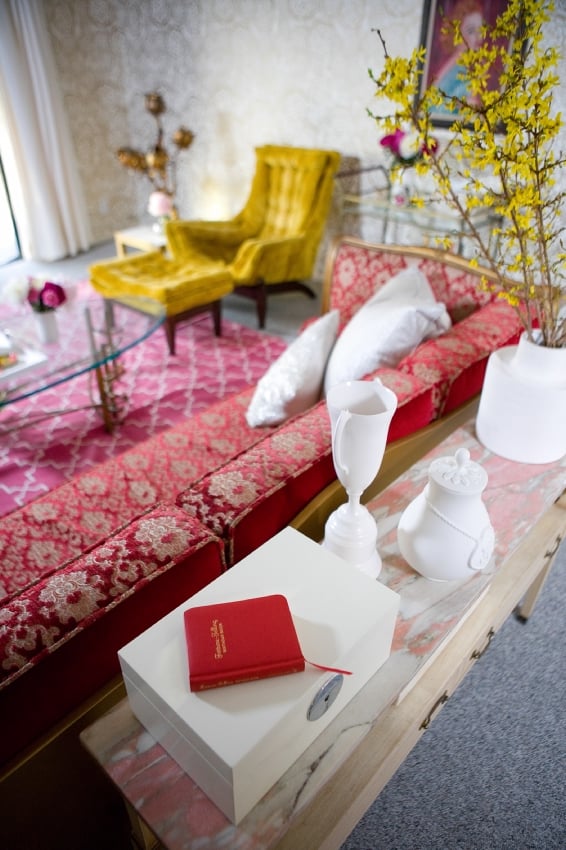 Look one: total princess palace.  Not really joy in retrospect, its pretty hard to properly diagnose people that are nuanced, so now i realize how not joy that sofa is.  It was a last minute rental to make the room go over the top. 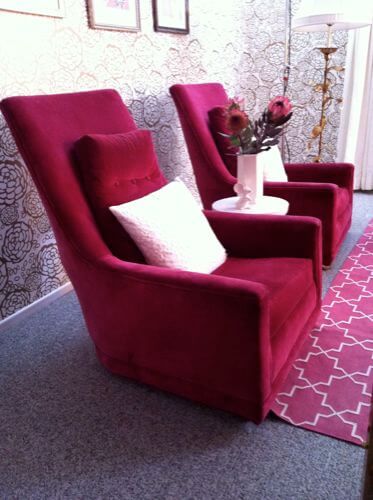 Ok lets’ talk favorites of look one:  those hot pink mother effing chairs.  I LOVE them. I rented them from Pasadena Antique mall, from the booth upstairs called ‘Bonita Interiors’.  They were $900 for the pair which isn’t nothing, but they were in PERFECT condition. We rented them for 25% and i’ve since really regretted not buying them. They were huge and super comfy.

The hot pink and the second look indigo rug are both Madeleine Weinrib The pricetag said $1000 but that was with my discount, i think they retail for $1200.  They let us borrow the first one, and then we shipped it back to them.

308 Comments
Oldest
Newest Most Voted
Inline Feedbacks
View all comments
Our sites use cookies to improve your experience. Learn more