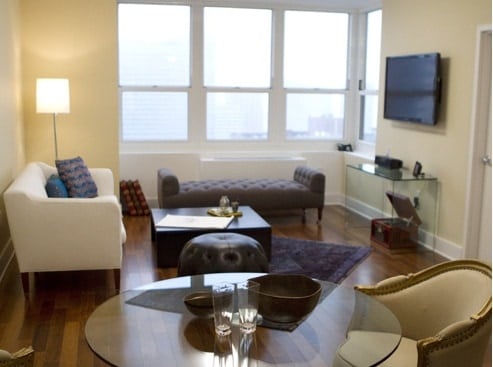 You guys rock.  Seriously thank you for the support.  I thought about not addressing it (the cruel anonymous comment yesterday, click here), but, well, that felt lame and way too passive.  Really glad to know that you guys have my virtual back.  Thank you, thank you.

Now on to the Red Team.

You weren’t the only ones shocked about the double elimination this week.  oh no.  We, the blue team, got our little reality worlds rocked when Courtland walked through the door and shut it after him. alone. He then very theatrically fell onto his knees, dropped his bag,  opened his arms and shouted happy obscenities.  Always the dramatic, that Courtland.

So now for the Red Team.  You should know a couple things – these people are my friends which makes me biased, and i like them all personally.
Heres’ what i like about their space.   Probably more than you think.  i like that they played with mixing styles, too, but kept it high end.  Their furniture had a much better scale for the room, that tufted bench is super pretty, that coffee table grounded the space and adding in a round black leather pouf created contrast in size, shape, color and brought in a bit of youth and edge.  My, my, don’t i fancy myself some sort of design expert.  What makes me worried is the rug.  ish don’t think so.  I do love that rug, but we actually had a ton of rugs to choose from this time, so not sure why they got one so small.  And the angle, don’t want to beat a dead cow, but the only rugs i like to angle are hides.   I like the modern glass/metal table mixed with the traditional frenchy chairs, and their color palette wasn’t altogether different than ours – but no, i wasn’t crazy about the yellow walls.  I actually think the red team has some much needed color contrast in the furniture choices, however, that our space lacked – I think the person that lived here probably didn’t spend too much time here and maybe never fully moved in, but they had good/weird taste in furniture.  I feel like maybe the judges aren’t as interested in mixing styles as much as we are and they saw things as concept-less rather than an unfinished good concept.  What do I know.

Yes, of course they needed art and accessories – a lot of them.  But we didn’t have the budget or clearance for that.

I don’t totally get this tall table thing.  Sorry.

OK.  I think that we all agree (including Stacey) that this bed needed a mattress as well as maybe to get rid of that black dead animal at the foot of the bed.  BUT, the bed itself is beautiful. I like the trunk side table, not so much the lamp, it reminds me of my hotel lobby days….woah woah,  i was a cocktail waitress (queue my lady of the night music).  As far as the drapery goes:  I actually thought that incorporating the taxi-cab paraphernalia into the drapery was interesting in a deconstructed way.  It’s not like we had fabric stores to choose beautiful drapery from.  Drop cloth canvas was our drapery and Stacey thought that drapery would elevate the room.  Of course you can rip it apart and say how crazy she must be for putting drop cloths in a luxury apartment, but keep it in perspective, people.  We were also given plastic souvenirs to work into the luxury apartment, so excuse us for not being perfect and for perhaps not totally understanding the inconsistency of the challenge. I like the color of the room, the idea of the drapery, that beautiful bed, the pillows and the trunk.  Again, needed matress, art accessories, life.

Ah, the notorious blueberry bathroom.  What’s the big deal?  So it’s blue walls?  It’s not like every guy in town hasn’t had blue walls at one point or another.  I’m a Tom fan, through and through.  And I understood what he was going for, although, yes he made a mistake in the color choice (hello, mistakes are made every 10 seconds when working under this kind of pressure).  I think a dark bathroom can be weird and cool and cozy, for a guy, or a club, or a smurf brothel.  The fact that it has no natural light is the exact reason why you should embrace a color (although maybe not a saturated color) and not just paint it white like we did.  Without natural light, white can look bland and unfinished – but paint a room blue and you have yourself a mini statement – a little surprise when  you are on the john.  And who doesn’t like a surprise while on the john.  Let me be clear: no, this did not look amazing, but relax, everybody, its just blue walls.  Geez.

Elimination.  My, My it is getting heated up there.  At this point I want to press stop and rush to Chicago to give Stacey a hug.  I know that you  guys didn’t get to know her, but she was snarky as hell.  She had good taste.  Not perfect when it comes to teamwork and competing, but someone you wanted around all the time because she is just overall rad.  I’m sorry that you didn’t see that.

Stacey looked pretty broken and sad and done.  I wanted to reach out and hug that little hot pink bundle of snark.  I’ve been there.  You just want to give up and go back to your happy life.   I think that Stacey was ready to go home.  At this point we could each go home for anything, so its not that its arbitrary, its just that we are getting down to the nitty gritty.  Working in groups is stifling.  it just is.  Her 60% comment was probably true, she was just done.  I missed her a lot.
Tom!! Talk about ready to go home.  Don’t feel bad for this guy, he has a crazy amazing job and was ready to get back to it.  He did this for the adventure, not the career, so he felt like he had enough and was ready to head back to real life.  Sayonara reality.  Off to his summer house on shelter island – where i will be joining him next year, he invited me…  and i’m a big taker-upper-on-middle-of-the-night-kinda-drunk-invites.
Not everybody got to know Tom like I did, but he’ll always have a place in my heart.
Courtland’s video was shocking.  I’m glad that he apologized beforehand, because man that was…um….not nice.  at all.  Courtland is a nice guy, he must’ve just had it up to his v-neck with his teammates.
Down to five.  Kinda nuts.  And at this point while we are still sad that people we like are gone without a proper goodbye, we realize that the less people around means the less people to compete with.   So I guess a double elimination just makes the whole thing more efficient.
On to the kitchen challenge.  May you all forgive me.