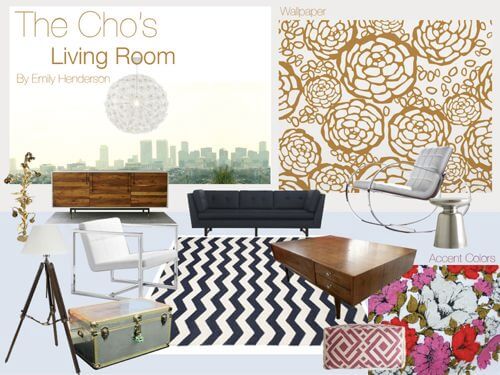 Episode 4, teaser: OH JOY is in the hiznouse

Here’s the mood board for Joy’s episode.  Does it put you in the mood? I saw a rough cut of the episode a month ago, but i don’t remember if they kept me saying that the wallpaper is Joy’s wallpaper.  Now i know that you all know it is, but spread the word.  It looks so effing, awesome.  I liked the swatch a lot, but i didn’t realize how much i would love it til the whole room was done in it.  After doing her whole room in wallpaper i realized how much more i like an entire room done rather than one wall.

It just feels like a big golden floral hug.

A lot changed from the mood board to the show.  But the general idea is the same.  You can buy her wallpaper from Hygge and West Here.  I highly recommend it.

I’m psyched to see it, and i know they are.  god i wish this episode (as i wish most) was an hour long because so much funny stuff happened and was said that gets cut due to time.  But don’t worry, next week will be a lot of behind the scenes.

And i guess some people say that a new SFAS did not air last week at 9pm and instead it was the first one (which i wish didn’t because its so not my favorite) so make sure to check that its ‘NEW’.  I don’t totally understand it.  But it airs on my tv at 6pm and 9pm both new, but please check yours.  You can watch last weeks online here.