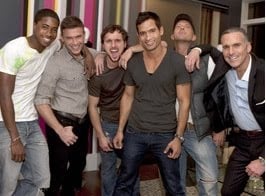 I just wrote the longest post and then safari shut down.  Awesome.  Perhaps its because it could tell that i’m weak, that i’m a weakling.

OKAY!  episode 2.  Not my prettiest, emotionally.  So I’ll walk you through it quickly to get to the good stuff.

The challenge is fashion to room, we all know this one.  But we have to combine all five of our looks into one space, not easy, pretty unrealistic actually.  I’m a fan of the fashion to room, not literally but the idea that your interiors should reflect your style.  But combining all of them is hard.  Every time we complained about this, they producers would say ‘I guess that’s why they call it a challenge’.  It got to be a pretty funny joke, actually.

I was feeling fragile from almost being eliminated 12 hours before (you guys get a week between challenges, we get hours).  I was excited to work with the girls, I liked Casey and Stacey instantly.

Day two was slightly more pleasant because Tera and Nina left to get accessories (which they did a pretty good job at) and I repainted the niche from gold to charcoal – the gold with the yellow with the peacock headboard fabric that almost went up looked like a terrible terrible bed and breakfast in Maine, circa ’83. Stacey painted a pretty chair and Casey sewed the drapes, helped paint, etc.   Ultimately I think the living room was pretty – i stood behind Nina with the hot pink rug.  I liked the sofa/coffee table situation, the starburst, bedding and side tables in the bedroom.  When the judges came through, we all agreed that we liked the rooms, well mostly.  Here they are:

The bedroom is a bit tragic, the yellow is not good.  And those drapes were meant to be lush navy velvet, not elvis crushed velvet – they couldn’t find what they wanted there so they got this instead.  time. pressure.  sucks.

Now the juicy stuff.  The second I met Nina I knew that we were opposites in every way possible.  I knew it.  I could smell it.  This could go one of two ways and I’m pretty sure you know which way this went.  It sucked.  The power dynamic was set up after the first challenge, which she won and I lost (almost), so i was the natural weakest link in her mind and she dismissed me completely.  Fine, I get it, it’s a competition she didn’t think I could design. So it made our relationship a bit tricky.

And yes, i’m the dolphin, Nina is the shark – in case there was any confusion.  I’m not an idiot, i’m just not a killer – just sayin’.

So why did Tera go home?
She chose a bad yellow, sure, I could’ve easily picked it too, you get really only a few minutes to choose, and her concept was just a color concept, but those aren’t reasons to go home.

Tera’s mistake is being overly defensive with the judges.  There are ways to disagree with what they are saying, but still showing that you listened.  She almost came across arrogant, like she knew more than them.  And then throwing Stacey under the bus was unnecessary and passive aggressive.   It’s a pressurized situation, remember, so maybe she wasn’t really acting like herself.

Ooh, let me reiterate I HAD NOTHING TO DO WITH THE BASKET ON THE FLOOR.  It was horrifying, and I shoulda just taken it away after Tera and Nina put it there, but at some point you have to let people make mistakes or else no one will know who should still be there and taste levels won’t be displayed.   How did I get blamed for that just because I didn’t stop it? Weird. (please spread the word to any and all people that you know that I didn’t do that.  family members, friends, your waiter, bus driver, every stranger on the street!!!…..the world needs the truth, ’cause that sh*t is embarassing.)
Ahem.
Tera, I think would make a much much better host than most people on the show, though.  She is adorable and charming, so likeable, (except at elimination and when she is around Meana) and such a MILF.

So about Nina not going home.  I’m sick of everyone saying that Nina is only there because she is the villain.  Yes, of course she is the villain, and that creates good TV.  BUT, she also has a lot of design chops that the audience doesn’t see.  She deserves to be there more than some other people.  Let me be clear, we have  completely different tastes,  I’m not a big diy mural girl.  ( I’ll do a ‘murals that I like’ post tomorrow, to show you what I like and why – as if you care, but still it gives me something to blog about, i’ve been scraping the bottom of the barrel lately.  )
But unfortunately for Nina, her aggressive personality gets all the attention and her good work gets kinda ignored.  Its taking every bone in my body to be objective here.   So difficult.  I’m amazing myself.

As far as the guys?  I really liked their living room.  But looking at them objectively, I liked our room better, sorry guys I love you, but if I had to live in one of them I would take ours. 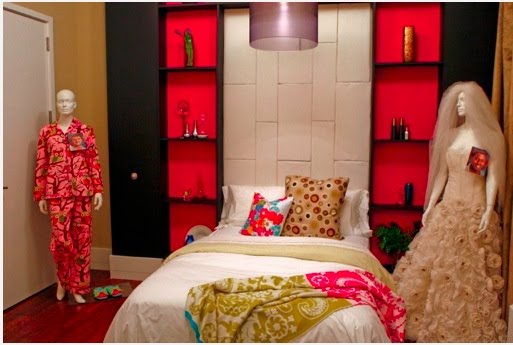 That’s all the gossip for today, i’ve probably already said too much.