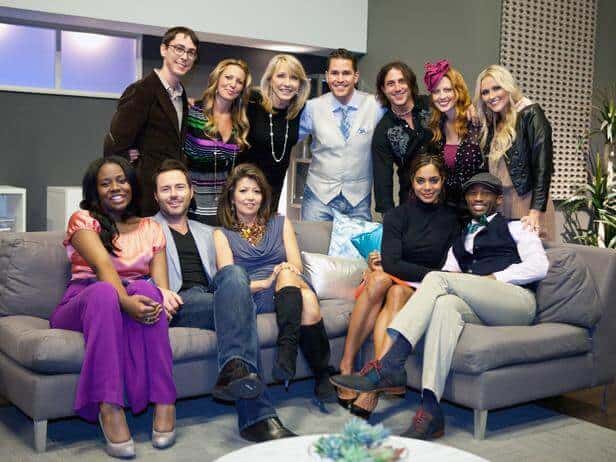 I love a good reality show, you know i do.  I love the ‘cast of characters’, the crazy adrenaline fits, the impossibly awesome but more likely totally appalling results that can happen.

So two nights ago, I scrutinized everything – how they dressed, how they introduced themselves, how they treated each other, how they reacted to the judges criticsm and obviously how they designed their spaces.

The challenge was to pair off in teams and decorate the house that they are moving in to for the duration of the competition. Simple enough, you’d think, but i think their biggest challenge (besides working in teams and having a limited amount of time and resources) is that the house was a Mcmansion and those are very hard to decorate or design without a ton of money and resources. They are HUGE and therefore really hard to fill properly, plus often the architecture isn’t interesting, the finishes are bad and there is wall to wall carpeting or tile. This would be like trying to style a woman with purple skin and no hair – sure you could do it and have it look really STUNNING with the right outfit from Paris fashion week, stylized makeup and crazy David La Chapelle set, but you can’t just throw an average pair of bootleg jeans, a tunic and some moccasins on her and expect her to be Iman, on the moon.

So while i wasn’t impressed by anything crazy amazing, i also realize that considering the situation – a few of them did a really good job.   Plus the first challenge is always rough, trust me.  You are just getting your bearings and figuring out how to bring your set of skills to the table.

Kudos, Season 7. It was a good premiere.

Here are my favorites, in order:

For 3 days and being the biggest room in the history of big rooms, it was layed out and filled really well. When Danielle chose charcoal grey for the walls i thought ‘Ooh, i love caving, too’, as i thought it would be too dark for such a huge cavernous room. But with all the bright white and picture molding (a design star favorite tactic, for sure) i thought it looked nice.

I’m crediting Danielle, because it seemed so much like more her work than Luca.  She is a favorite – and she seems nice and personable and has good taste.

Meanwhile, Luca,  her team mate, has a group of very, very, very worried jury members out on him over at the Henderson residence.  When he said, ‘I can do ALL of your jobs’ when introducing himself to the other contestants, I grabbed the remote, rewound it and announced him dead to me. I’m sure he’s regretting it today, but that kind of cockiness with his weak portfolio was hard to take.  (I should be a diplomat, or a professional ‘self-tongue holder’ because i’m working some real restraint here).

But back to some less negatives.

Next up is the den, by Hilary and Rachel.

The room as a whole isn’t knocking my socks off, but its not bad considering the time and resources. Without those plants i fear that it would have been pretty lifeless, so good call on that.  The coffee table is good. It was designed by Rachael and totally well played.

Did i think she was the hands down winner? nope, I thought that Danielle had more challenges to overcome, but i like her.  Rachel seems nice, interesting and has the mid-western girl next door thing happening.

She was also ‘responsible’ for placing the moose head on the black wall, which the judges called ‘genius’, which i think confused most of us watching.  You know what else is genius? beds in a bedroom.

Rachel’s partner, Hilary, seems fun and likeable despite her weird TV wall invention – just ignore it, i don’t think she was proud of it. But she said she loves reality tv, so she won me over right there. I do too, Hilary….I do, too…..

Up next, another bedroom by Milkel and Britany,

Do i love this room? Nope.  But for 3 days (with interviews and production time equals 2 days) its not bad. Yes, it has a ‘barely-post-pubescent-teenage-triplet-girls-in-Orlando-Florida’ thing happening, but it also isn’t that bad – its just too much teal. If they had chair-railed the walls and painted the bottom half white it would have been a lot better.  Or if they had mixed some grey or neutral in with the yellow and hot pink and teal…..

It’s so easy for us to judge….it is.  But, in the scheme of things, its a very put together room, plus i like their personalities a lot so far.

Then we have Jordan and Miera:

And their love shack.

These two seem like good smart designers and they aren’t psyched about this room, no way.  Nothing about it is offensive by any means – no red flags, but it is just is below their potential.  The carpet is a bummer – if they had been able to put in hardwood flooring and pretty rugs it would have helped a lot – but thats clearly not their fault. The window treatments are a bummer, and there is nothing really AMAZING happening here, but again, its totally, totally fine.  I like them both – he seems nice and interesting and she seems like a firecracker that would be fun to party with and probably tells inappropriate stories about key parties in the 60’s.

I can’t find a pic of the next room, so you’ll have to imagine it. But it wasn’t good.

Kris (who i think i’d either hate or love/hate if i met in person) came off really difficult to work with, but he did do a fun installation art piece that i liked:

Against a bad wall color, true. But his table is interesting.  His partner, Bex, did her own weird art installation:

I didn’t totally get it, but I don’t hate it….if done with the proper time and finishes it could be interesting.

BESIDES, Kris and Bex could be Miles Redd and Kelly Wearstler and their room could be on the cover of Elle decor’s best rooms ever compared to what you are about to see:

I’ll say this first – the designers weren’t happy with the room – they knew it was bad and they had major regrets. People freeze, they don’t do their best work or even possibly they do their worst work in situations like this.  But otherwise i don’t know what to say that i feel comfortable my mother (and the Network) reading.

But as my mother will attest, i’m a rebel so i’ll risk it……

Here are some general rules:

1. Never put dark barney purple and lime green together…..I hate saying never……Ok, Unless its a room for blind people, or if you are in a castle in ancient bohemia and Elle Decor UK called and they asked you to do something crazy that would defy all trends and crown you riskiest designer in all 5 galaxies.   Then maybe, and only MAYBE should you TRY and combine purple with lime green on the walls.

2.  Never put furniture on an angle like that (ESPECIALLY ORANGE FURNITURE with the lime green walls, DEAR GOD……).  Too many hot, provocative, aggressive colors together without any neutrals equal Waco, texas, circa 1993;  bad shit happens.

3. Never combine lucite and stainless steel unless its IN a chef training facility or in prison.  Both are very cold materials so be careful with that.  Lucite with wood? Great.  Stainless with wood? fine.  But glass or lucite with stainless steel is a really hard mix….

4.  Never put empty frames on the wall – just don’t do that anymore, especially if they are painted orange and lime green with balled up craft paper.

5. And as far as combining two different types of wood flooring into stripes? i’m not on board, but i do think its an interesting concept and if it were dark ebony and white washed wood…..then it could work….in Living Etc, styled by Lilli Diallo with a ton of natural light, some amazing Victorian rattan furniture, an oversized chandelier and a cluster of baby bunnies cuddling in the middle to add an enormous ‘adorable’ factor that would distract from the flooring.  In general, people shouldn’t try this at home with normal wood flooring (especially if its laminate….trust me).

Stanley and Yuki were responsible for this room.  And again, i know they regret it and they are both probably more talented.

Meanwhile i get to be the *ss hole that rips their room apart.  I’m sure they are nice people, but when you compete on national tv for something that you are supposedly really good at and you produce that room, then expect some criticism.  I had to handle it during my white box challenge and while it sucked, i NEVER disagreed with it.  Part of being a good designer is recognizing when you do something bad.  And if there had been time, i have no doubt that they would have fixed it.

We don’t need to beat a dead design horse, but that thing on the wall – the collage – hurts my heart, nay offends my very design soul.   I feel bad for them, but i also feel bad for all the frames that have to live the rest of their days up on that wall with this collage:

Yuki went home.  She is totally cute, adorable and sweet and i personally thought that Stanley or Luca were bigger offenders this week.

My predictions after the first week (which will change and i’m fine with it) are:

Danielle (she’s likeable and has good style),  Jordan (he’s dapper and has good taste, plus he makes candles?????), Britany (fun, young and happy) and Rachel (girl next door factor is happening and she made a good table).

I would bet that one of these four will win, but i wouldn’t stake my money on which one…..yet.

And again, its sooooo easy to judge 3 months later, behind a computer screen and without knowing the whole story….so i apologize if it offends anyone or is being too harsh.  This was literally the tamest i could be without losing half my readers out of boredom…..

Who are you rooting for after week 1?

Who do you predict to be Season 7 Design Star?