It’s kinda like The Hunger Games, except there’s not a team doing your makeup and there aren’t hallucination wasps…at least there wasn’t my year.  But someone else is controlling all the stakes, every day is a new challenge, you are totally on your own, in a foreign situation, competeing without your usual tools, resources, helpers….therapists… vices….You are just doing your best to stay in the game, and win…with dignity. Often my goal was to simply do something that i wasn’t going to be ashamed of long enough to woo them at the end when we had more time and resources.

If you win, you get yerself a new life.  It’s a  job that leads to crazy oppportunities, endless fun, and an opportunity to reach, nay, effect many, many people.

Plus, just now i got to use the bathroom on the plane when the seat belt sign was obviously lit because the flight attendants are fans. (oh just for you, Emily) ‘sright.  Ask Princess Diana if she got to do that. Breaking FAA regulation for a design star.

But you have to win.

….or else you die a bloody, painful public death.   Kidding.  Truthfully don’t worry, it will only be good for your career and the people that like you will always like you.  Remember Casey Noble (Design on a Dime) and, Michael and Nina (Clean Sweep New York) all from my year have all had shows from it (and Todd Davis from the 1st year, it hink has ‘house crashers).  So if you don’t win this show, things could very well still happen for you on TV, your business will probably grown and people don’t really remember the bad stuff.

It starts May 29th, my friends.

Meanwhile the portfolios and names have been released. And they are ready for our review.

I always struggle during Design Star because obviously the contestants could read this and i don’t want to say anything that will make them feel really bad – they already feel vulnerable enough and as long as they aren’t dicks (which hopefully a couple of them will end up being) then they don’t deserve to wake up, check my blog and then feel bad.  I’ve been there, so i get it.

HOWEVER, it is a competition and they have voluntarily shared their portfolios (that supposedly represent them) with the world, and as a designer with blog who has been through this process,  it just seems crazy to not simply share my opinions about their work.

Here are some things to think about while looking at their portfolios:

1. It may not represent their real potential completley because they could have assisted for a long time and have very little work of their own to submit.

2. If they didn’t splurge on a good photographer than most likely their portfolio will not be good EVEN if their work is interesting.  Please note this if you want to apply. Although, you should have good photos anyway to get new, better and richer clients, but if you are serious about getting on design star, then hire someone to help you.

3. Clients styles and tastes help control the design but they don’t 100% dictate it.  Nobody can force a designer to do something really tacky – you can always find a tasteful version of what they want.  HOWEVER, yes, sometimes you are out of time and money (and maybe you stop caring because you just want it to be finally over) and the client is like ‘what about using this porcupine vagina as art above the bed’ and you are too tired to argue another piece.  Then in that case, you should simply NOT include it in your portfolio.  Quality over quantity.  I promise. Except that maybe a porcupine vagina could be awesome.

Ultimately, your portfolio does represent you when you aren’t there to represent yourself, so until we see Episode 1 and a see what they are actually like in person then then we only have these to go by.

Here are my pics of the strongest portfolios.

AGAIN,  i’m not talking about their design skills, or their style, or their personality – just how strong their portfolios are.  I’m sure so much will change as soon as we meet them. 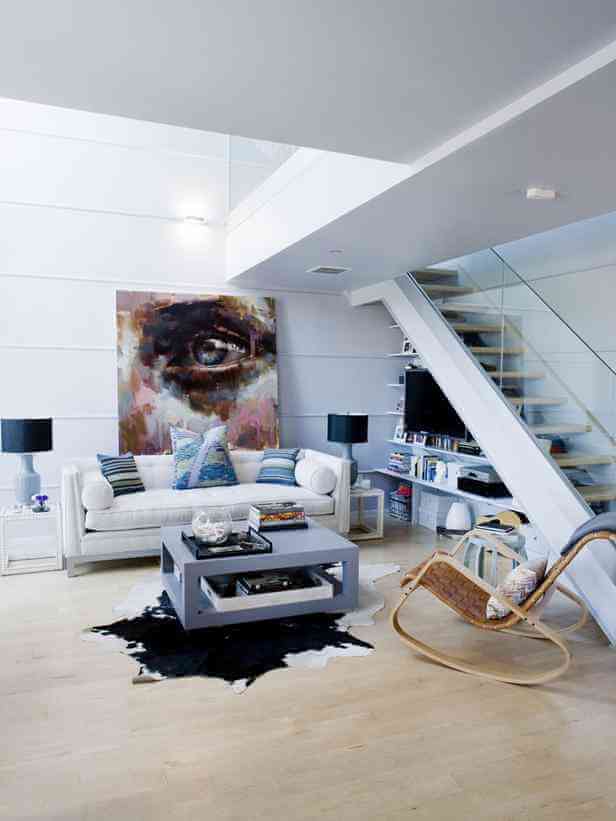 Great.  Airy and light and i love that chair. 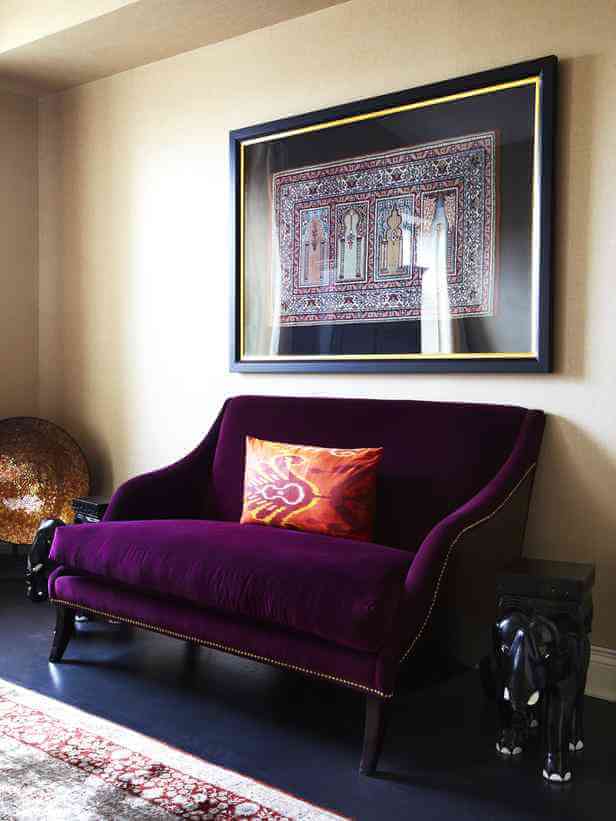 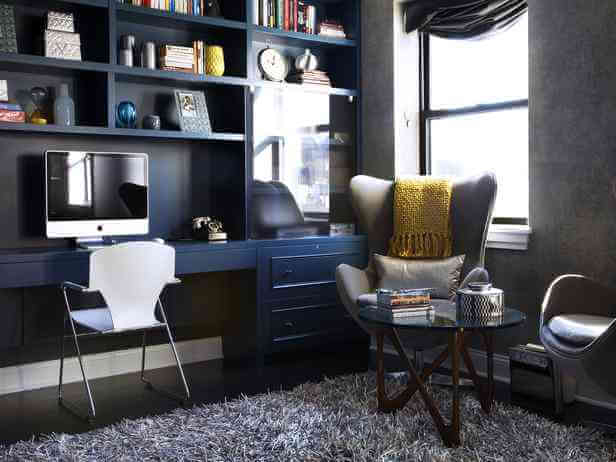 Sure, a great masculine office for a hip dude.  My bachelors would love this. 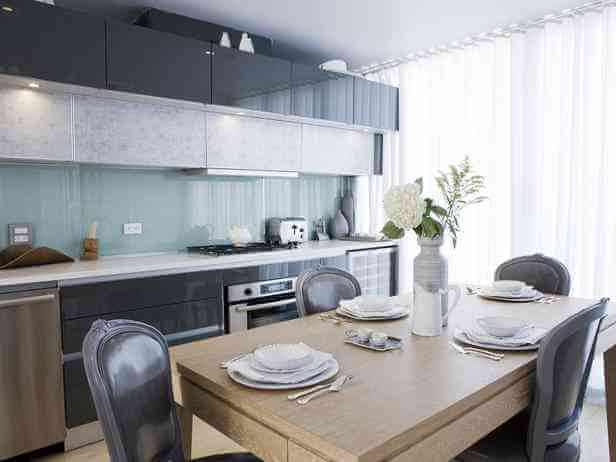 Totally tasteful.  I like her work.  Its not breaking a lot of rules, but just enough to be interesting.  No red flags, and those first two pictures i think are super pretty and show a lot of style.

Dapper, no?  He is from Australia originally and lives in Venice. 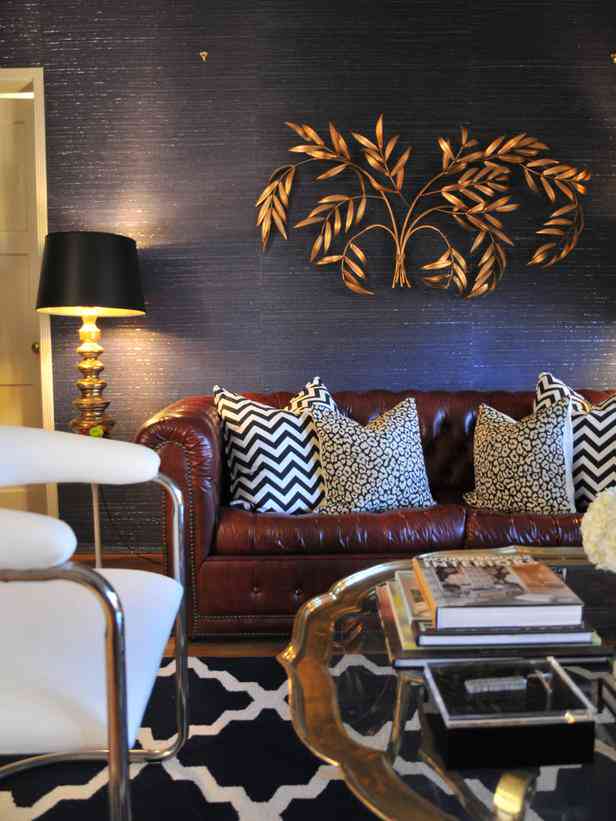 Cute. He’s from Austin (originally canada) and he says his motto is ‘Risk equals reward’ which i like.  His portfolio was big and there were a lot that didn’t grab me, but he seems like he has breadth.  The three pics that i liked were very different from each other and that gives me hope that each week he might do something different. 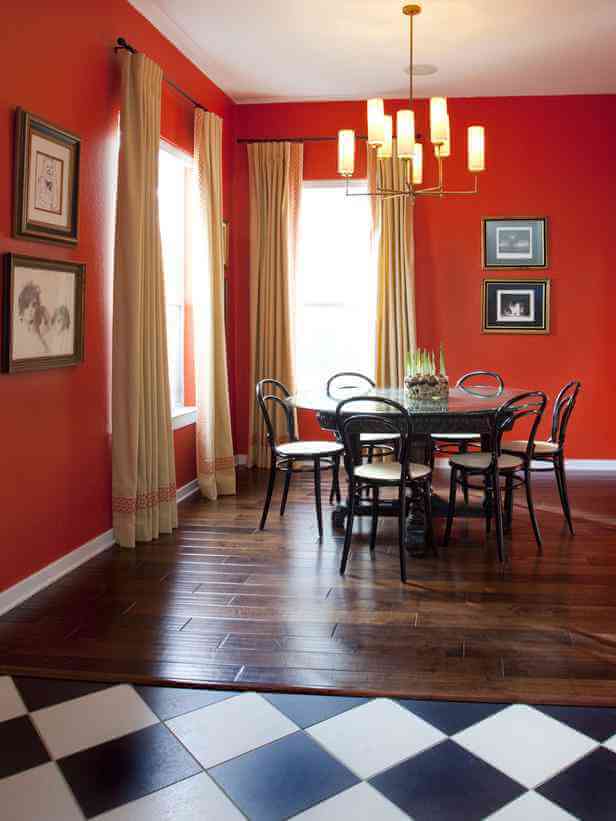 I’m down. It’s definitely strong, and it has a point of view.  I don’t think i have the balls to paint that much orange on the walls, so kudos to big balled Kris. 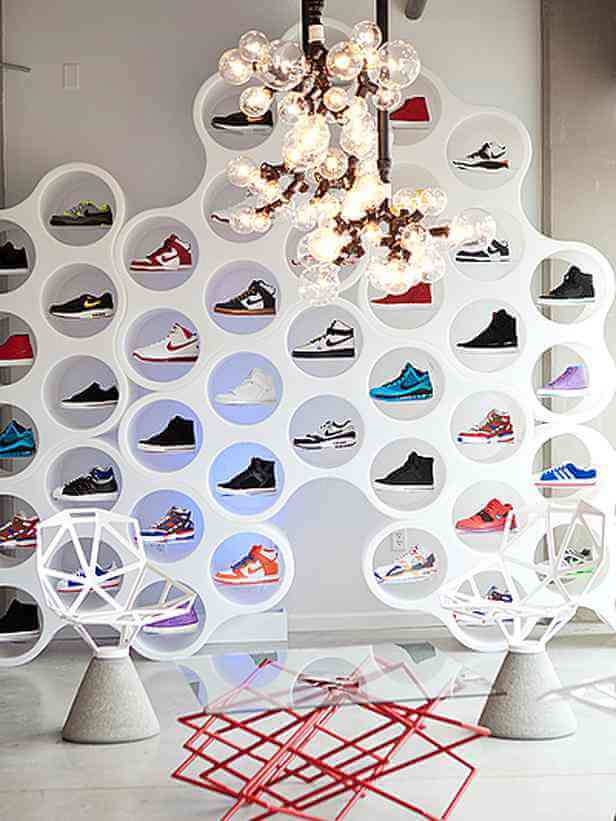 It’s a store, obvi. But its cool, no doubt.  I love how the shoes just float there.

And then we have classic and sophisticated with a whimsical squirrel on top.  All three different, all three tasteful.

She’s had a firm for 28 years and her portfolio is strong.  Very Candace Olsen – totally pulled together, nothing too out of place or unexpected. A lot of women would kill for these spaces. And she has great photographers and very high budget clients. She’s obviously a pro at her style for her clients. 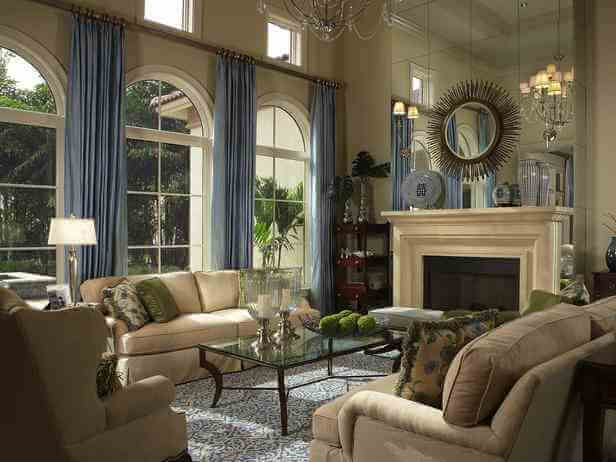 See? Portfolio wise? She has a good one and will get more clients with this – whether or not it is my style.

She’s 28 and from Phoenix.  Her style is ecletic and edgy with a touch of ‘Glam Chic’

Very on trend and totally cute.   i do love thos black and chrome vintage chairs.

It looks good.  Its fun, colorful and pulled together.  Totally approachable for TV and no big red flags.

Cute, bright outfit. I appreciate that.

Yes, It’s cuckoo. But it also has a strong point of view. You know David Bromstad would love this space.

Bex Hale is originally from Portland, so she is already in with me.  And her name is ‘Bex’ which is kinda awesome.  Her style is ‘Art Eco’ which i think sounds interesting and she wears hats and cute rockabilly dresses.  Her portfolio has weak spots but i really like this shot below: 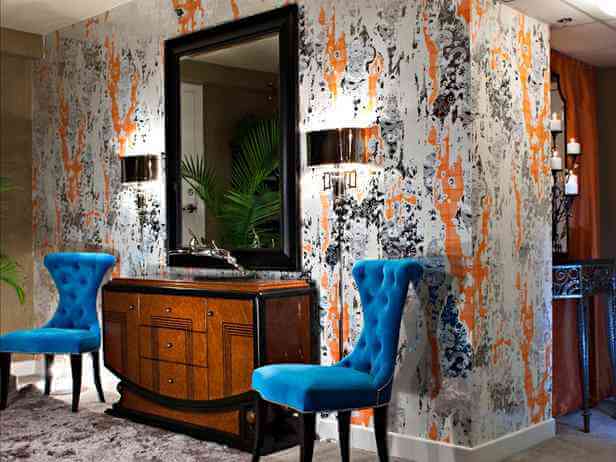 This is my favorite shot from her portfolio.  I’m not sure if that is a mural or wallpaper or stone, but its interesting for sure. And with the blue chairs? i like. It at least has a point of view and an interesting color combination.

So those what i think are the strongest portfolios.  The other 5? One of them could definitely be the winner, and i’m super excited to find out.

I think the portfolios are better than last year and the year before (my year).  It looks to me like the producers are looking for really established designers, and people who have a lot of experience. And it also looks to me like people are finally realizing the incredible importance of good photography.

Meg’s portfolio last year wasn’t necessarily the best, and she was a favorite and won. And Casey Noble (who came in 3rd my year who has very good taste and is super talented) barely had a portfolio at the time (because she had worked at a huge firm) and she made it super far and now has her own show, Design on a Dime.

So while the portfolios do help to get you cast, they really don’t matter once the competition starts.  You never know how much help these people had designing the spaces in their portfolios, so its still any one’s game.

It’s also my opinion that 60% of the game is personality, maybe even more.  An unengaging host will never keep a show whereas a great host – with mediocre design skills, can have help and keep a show forever.  Believe me.  Lets take Martha Stewart for instance.  She is an insanely incredible, smart, talented, creative, established design maven and yet her personality drains every ounce of entertainment out of her show.

I can’t wait to find out which of the 5 weaker portfolios (NOT designers necessarily) are actually going to kill it in the competition. One of the 5 is an ex-intern of mine.  It was short lived (maybe a couple weeks) because he got a job doing set design for Jerseylicious and had to move.  But during that time i really liked him and he went out of his way to help, engage and ask questions and learn.  But i think he was an assistant before that so his portfolio is mainly the set of Jerseylicious which obviously, ahem, is not awesome (which i’m sure he’s the first one to admit).

See, that is NOT his fault.  Look at how he dresses – stylish, classy, cool.  He’s a victim of these ladies…aren’t we all?

He did have this one shot in there, though, that i think is pretty:

The other 4 just have less than good photography.  They could be GREAT designers.  I’m excited to see what they do and how they turn out.

If i were all of them i would start a blog to explain the behind the scenes.  Its 3 days of challenges that get widdled down to 44 minutes of footage so the editing might not show that you literally didn’t have a hammer or nails and only had a massive-crazy-looking-very-dangerous nail gun (which was the case in my white box challenge).  Of course you’ll have to ask them, as there are some big old secrets to be kept.

And you know i love a secret.

I don’t have a prediction yet, and i was wrong about last year when i first guessed from the portfolios.  After the first episode we’ll all have a MUCH better feel for their personalities and that’s when the real opinions can start.  Remember – yes they are edited, but NOBODY can force anybody to say anything that they don’t want to.  You can be honest without being mean – but editing can be a beast.

I’m bummed we have to wait a month.

So who are you rooting for?