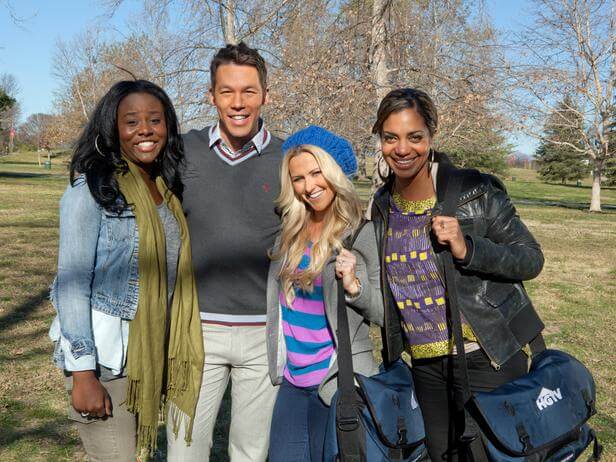 Down to the Hilary, Britany and Danielle. I like them all style wise, so now its just who can carry a show.  There are a lot of design shows on right now and frankly even i don’t watch all of them, so i want personality personality personality. Jeff Lewis, for instance, has kinda boring contemporary style and He ALWAYS does the same thing – grey walls, chrome, contemporary tiles, clean lines, yadda yadda. But am i still riveted? Well, maybe not ‘riveted’ but i ALWAYS look forward to his show because of his personality.  If he shook it up every week design wise it would it  be WAY More successful, yes, but i still love it.  I suppose that could be because frankly i’m not looking for design information as much, i’m looking for entertainment which is opposite of what a lot of people look for on HGTV.

So the challenge is to design a ‘fantasy bedroom’ in a Yurt.  These yurts aren’t exactly beautiful – which they aren’t meant to be so i feel like they were definietely set up for a challenge. There is no natural light, there are no corners or natural shape of a ‘room’ and there are really no ‘walls’.  I still think the glass house is where its at.

Britany went with a mid-century beach theme, with her handyman Joel (who is on Casey’s show ‘Design on a Dime’, and he’s adorable.)

I really wish they took these photos during the day, with normal lenses. This room looked good on-screen because the ‘beauties’ were shot nice, but this shot makes it look super weird.

Ultimately i think this was a successful room. She built this huge headboard wall which could rotate to reveal a closet on the other side, which is super smart.

Her photography broke up the wall nicely, and i’m glad that she didn’t use 6 different photos or it would have gotten super busy on that wall. Even though i’m not a massive fan of the nature photos specifically, i do like that they felt like windows and brought the outside in a bit.  Smart.

Ultimately a good space.  Britany’s camera challenges were again good – she seemed nervous, but way better than a ton of hosts that are super hosty. She did seem more comfortable.

Here we have Danielle. Danielle was an early pick and i’m so happy that she is still in the game.

No red flags as at. Great layering of rugs, interesting eclectic vibe, weird big plant. I wish she had done a king bed, for sure.  That bed looks tiny and proportionately weird and so chunky (which she admitted).

Her hosting was like Britany’s – good, getting better each episode and totally likeable in general.

I loved that bed she put in there.

But i didn’t love this color of silk. Its purple and purple silk so it can go gaudy really fast.

I like the seating area enough.  The colors are a bit cuckoo, but i’m not altogether opposed to it. It looks pulled together and visually pleasing, but there is something a little ‘Pier 1’ that i’m not digging.

Nope. Not into the orchids being hung like this. Orchids are hard sell for me anyways.

I like the idea of what she did to the door. In fact I love the screens that she made that she didn’t end up using.

Hilary went home, which i didn’t agree with.  Her personality was the most addictive for me.   But i like the other two and am eager to see them in the final challenge where they do a mini version of their own show.  Very curious.

Yes, i am being diplomatic, obviously. I’m going to end up hanging out and most likely forming a friendship with whoever wins so no, i don’t want to be critical.  I’m sure you all figured that out, which made me not even want to do the recap this week. But i did.  Barely.

So i’m predicting Danielle.  How are you guys feeling?