Down to 8.  This week the challenge was the redesign real people in their real houses in pairs.  I don’t remember what the constraints were, probably 3 days and 7 stores.  Two of them got to do the interiors and 2 pairs had to do the outdoors.  They all turned out to be vast improvements.

I think I miss Luca.

He was good tv, folks, you have to admit.  Dramatic, egotistical, full of earrings….

Up first is Stanley and Britany. Stanley is growing on me, but a slow grow – more like a redwood tree, less like a chia pet.

I’d like to see what he could do if he had unlimited resources. If he got a show i don’t think it would be a traditional interior design show – more like ‘crazy dude doing crazy things’ kinda show -which could be entertaining, for sure.  Don’t get me wrong i would most likely never let him into my house, but i do think he has some good skills and ideas.  And tattoos. And an extensive necklace collection. I wonder if he and Luca share jewelry in Pittsburg.

Here’s the space before:

And after.  Britany designed the chevron wall whilst Stanley built it.  He kinda got screwed here, but its a story we all know. When you work as teams and you have no contractor then yes, the dudes end up doing the manual labor.  It turned out well.  I wanted it stained or painted or something – the raw wood will probably age nicely but the tone of it right now i kinda hate.  It’s a good idea and it changed the space a lot.  But i’d be fine if i never saw another chevron again, right now.

It’s a nice deck, though.  Decks are trending.

I appreciate that they brought that detail over to this side, but thats about it.

Good, fine, safe, finished…..not too much to say.  I don’t think you can redo outdoors really well without real time and/or real money, so for the time and money they had they did a good job.  Thank god that house had a ton of climbing jasmine. I would kill for that.

Ah, the cuties. Personality-wise i’m LOVING these two, together and seperate.

And the after.  Wildly better.  And kinda good.  I saw where they had to shop and i think one of the stores was called ‘Al’s furniture’, which i think is one of those places where you can buy a knock off of a knock off of a 1992 Crate and Barrel piece.  So considering they didn’t get to shop at any vintage stores, i think this space has a lot of character.  Kudos to those ming chairs – they do it for me.

Like the idea, but not whats in them.  I’m sure they didn’t either, just needed to stick things in things to fill the space….so they stuck book pages in one and corks in another.  I totally get it, they had to…. but don’t do this at home.

When they first started painting i thought that color was going to go super ‘suburban’, and maybe it does a bit, but combined with all the whites and woods it looks good. It’s a pulled together room, for sure.  Nice job, friends.

Huh.  THese chairs don’t want any pillows (blocks all the pretty lines) but certainly not two each.  It’s causing a ‘where do i put my butt’ problem….one that i live through every day whether a chair has pillows or not.  I simply have no idea where to put my butt.  Ever.  Thank god there is a support group.

But im just looking for things to criticize really because this post is boring me.  I miss Luca.

Good. Fine.  I always think they should do a challenge where they have to design their dream room – something that represents them completely and looks like them.  Give them 4 days, $5000 and at least 1 antique mall or huge thrift store. As much as i like this space it looks like Pottery Barn and Restoration Hardware had a less-expensive-and-slightly-more-hip, baby. Its just not doing anything particularily exciting.  The homeowners scored and i’m sure its what they wanted (which is ultimately the most important thing) but hopefully we’ll see more crazy stuff next week.

Meanwhile these two are supes adorbes.  Mikkel is climbing that ladder and is making his way to the top.

Sure. Its fine.  Designated spaces, sense of intimacy, yadda yadda.

This is a huge like tumbleweedy thing and i thought Kris was going to turn it into a chandelier but instead its in this wooden box? Dunno.  I liked the idea behind it and i think he’s creative, but in this box it looks weird and 100% flammable.

He also used stumps as side tables, not inventing anything new here, but then he drilled holes to put succulents in them. When he started doing this i was psyched….well thats a strong word but i’m desperate for real strong emotion right now….maybe ‘kinda excited’ or even ‘slightly awake’ is more like it.

My problem is that they are super dinky holes with really sad succulents and it turned out like a kids project.  But it was a good idea and he should get props for doing it.

Fine. Bulding out the pillars was smart, but otherwise it doesn’t feel like  a designer has been here. More like your friend that has a good eye came over and helped you pull things together.  But i don’t think its their fault, its hard to do a huge backyard on a budget – hardscaping and softscaping is either expensive or you need years for things to grow.  So basically this is just a bunch of furniture, placed outside. 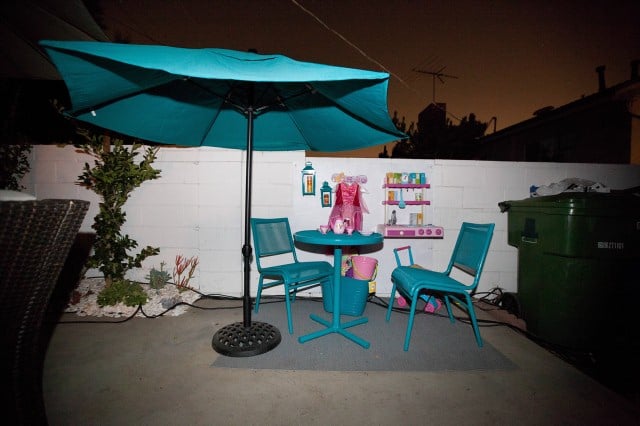 Rachel did this becasue she missed her daughter.  I can’t imagine how hard it would be to not see your kids for weeks. At least they let them call home unlike our year. (that last photo actually looks like some crazy piece of modern art).

I bet the daughter of the homeowner was psyched about this little corner, but yeah, it looked kinda trashy and dummed the whole space down.  Plus it was near the trash so that’s not awesome.

Speaking of trash cans did i tell you how i sprained my wrist last year? We were playing hide and go seek with a bunch of drunk adults at our friends house in the middle of the night  – total horror movie premise, i know – and I, being a mother loving hide and go seek genius, decided to catapult myself into a green recycling bin to hide.  Oh, i’m very smart.  For the record it was fairly new, not particularily dirty, totally empty (it was the day after the trash day) and i really wanted to win.  I landed on my wrist (although didn’t really feel the pain til the next day).

Nobody found me, but that could be because THEY STOPPED PLAYING AND WERE JUST DRINKING while i was in a trash can.  I crawled out after 1/2 hour, probably smelled really good and went back to the party.  It was truly a special experience.

Bandanas are trending. Rachel is still cute. Kris is getting warmer. #imissluca

And then we have these two.  Danielle and Melba.  Maybe the reason this week was so non-eventful was because i figured she would go home.  If she had all of a sudden turned into Kathy Griffin or even better, Carrot Top (can we all start referencing him more PLEASE???) during the hosting portion then she might have bought herself a couple weeks, but otherwise the last thing HGTV needs is another designer doing traditional albeit tasteful designs for the masses.  Well, thats my opinion, obviuosly.

The judges loved that chandelier and i want to burn it.  I’m assuming they loved the scale of it and what it does for the space, they have too good of taste to actually want to own it.

The chinese restaurant napkin folding is the most interesting part of this room. Are they being ironic? Or does one of them have restaurant experience from 1987?  i’ll explore….

Their whole drama was that Melba wanted to do an extensive custom built shelving unit around the tv that took up virtually all of the time, so they didn’t really finish.  And yeah, it looks unfinished.

Those shelves needs some secrets…..from a stylist.

This is the moment that the judges loved the  most and yeah, its fine, but i think they were fishing for positives here. It’s not a bad room, its totally fine and WAYYYY better than 75% of American’s living rooms, but there just isn’t anything to talk about.   Not finishing isn’t the worst thing that they can do, those constraints are hard….

I have no idea who is going to take this thing. Personality-wise i’m hoping for Hilary or Mikkel.  Rachel, Britany and Danielle are good designers but i want some more attitude from them – more, i dont’ know, pizazz?? Something that would be make me tune in.  It’s probably how they are edited, but i’m a little bored.

He was just so fun to hate.  Wait….is that a hypercolor t-shirt??? ah, sh*t! Amazing.  He gets props for being memorable, that guy.

Who are you guys picking now? Did it change from last week? and the question of all questions….how much do you miss Luca?