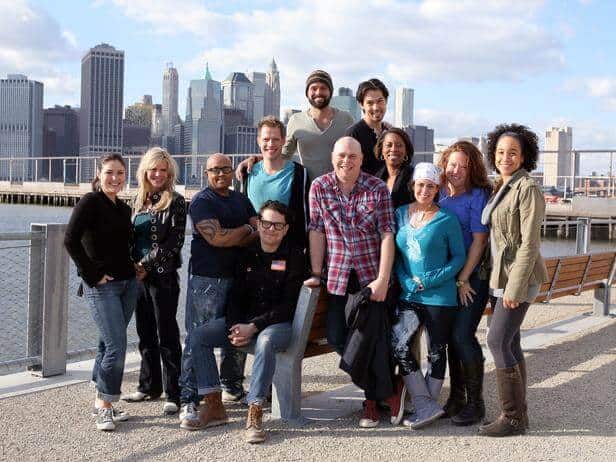 Design Star premiered last night and man i have a lot to say.  First off, i’m so so so so so happy about the changes so far on this season.   Pairs instead of groups.  Camera challenges early on (so they can practice and so we can see them progress), and who ordered a big old side of David Bromstad adorableness? I really wished we had had him last year.

During the twitter party last night there were a lot of fair criticisms of the designers.  You have to trust me that these are not normal designing terms and conditions.  You don’t have the best resources, you don’t have carpenters, you don’t get to shop where you want and even though they had three days (which i am intensely jealous of) a lot of that time is sucked up by production and interviews, etc.  So i’m not looking for the best room, those rooms don’t really happen til later in the season. I’m looking for the little signs that someone has a big imagination and will be a star.  Anyone can fail during these challenges and yet possibly be the best.  It’s a brutal competition thats not just about design – there are tons of great designers out there, better than Me, ANtonio and David all combined.  BUT this person has to be likeable and has to be able to engage a wide audience.  You can learn how to be a designer, you can’t learn how to be engaging.  You just are or you aren’t.

It’s the difference between Oprah and Martha Stewart.  Both totally smart, talented, and deserving of all their success, but i don’t want to hang out with Martha.  No sir.  I’ve heard not good stories about hanging out with Martha and on screen she comes off boring and snobby.  But oprah? girl, get me in the room with Oprah and she and I would talk and talk and talk. Hopefully about people with double lives.  It’s kinda my favorite thing to talk about. I mean, how can you actually have two different families and not have anyone suspect anything? Now that’s a good secret.  NOT from a stylist.

God, i sound so serious and dramatic.  But I feel like people are tearing apart the designers like crazy, and not looking at the little things they are doing and saying that are interesting or terrible.  So what? you have a nice composition in the room, that tells me nothing about you other than you aren’t an idiot and you have some training.  These designers were weeded out from tens of thousands of people so knowing how to design isn’t my question, i’m sure they are all proficient enough, but who has a fresh perspective that would have a fresh show? who has imagination and style?

For now i’m looking for the red flags.  The little comments.  I don’t care if the diy wallpaper job was wrinkly, in real life YOU HIRE SOMEONE.  That should never be critizied.  It sends the wrong message, it taught me to just not do anything that i couldn’t do myself or i wasn’t sure i could execute well, so i just didn’t do much.  The phrase if you are going to start something you better make it perfect seems totally ridiculous to me.  I didn’t want to get in trouble for poor execution, so i just didn’t want to execute much.  So i’m excited when they do take the risks even if they fail because if its a good risk then we should be able to get some insight into who they are and what kind of show they could have.

Don’t get me wrong, there is room to criticize, of course. Especially with personalities.  The second that someone starts acting bossy and know it all, i’ll be all over it.  And the second that someone does something of such poor taste or tacky or god-awful and they didn’t actually HAVE to do, i’ll be on it like white on rice. Some things are just unforgiveable.

I’ll have a proper recap hopefully tonight.  These are my initial reactions to the twitter party and the premiere.  I’m super into it, so come back later and see who my picks are for this season…..