Oh the kitchen challenge.  It’s a tricky challenge because of the limited choices due to the sponsors.  At least our year we only had 3 cabinets choices, 3 flooring choices and 5 counter top choices.

I remember thinking ‘oh, this isn’t designing, this is ‘picking’.  AND the other two teams chose the same cabinetry and there wasn’t enough for all of us to have it so off camera we did a paper rock scissors to see who actually got to use it and we lost, so our cabinetry was kinda terrible.  i would post the picture but then i would want to throw my laptop out the window and put my hand in a garbage disposal. It was terribly embarassing.  Also we got our furniture from Sears.  yeah…

But this year it seemed different. It seemed like they had more and better choices and more shopping resources.  They turned out more interesting whereas in past years all the kitchens looked alike.

So nice job everyone.

Here’s the white box that they have to work in.

Oh and the Kohler sink style that they choose has to inspire of the kitchen.  What.  Designstar has to be paid for and this is how they do it.  Deal with it, its just life.

Britany and Danielle were teamed up and i predicted they would win. And they did.  I’m a smartypants. I’m also predicting that Jeff wins the Bachelorette….

As far as hosting? They both did a great job.  Both comfortable and casual, but i’m not totally getting a ton of…i don’t know….oomph.  They seemed kinda low energy, but they were also probably totally exhausted and nervous.

Hilary and Stanley were up next.

I mean.  I wasn’t opposed to the red counter tops.  I like a strong red color anytime, but the combo of the red, with that weird baby blue/aqua/teal color and the contemporary cabinetry was a bad choice.  Hilary wanted the cabinetry to be white and she was right.  Or at least the walls should be white like this:

or they should have used a more sophisticated blue, like navy: 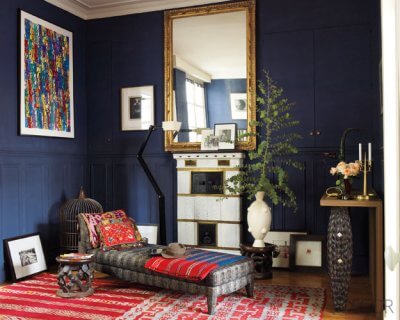 But not this blue, its too unsophisticated.

It looks like a really bad house flipper did this for a ‘wanna be cool’ loft.  It’s super ‘funky’ and ‘contemporary’ and just cheezy.  All the bad decisions were seemingly made by Stanley.  He chose the ‘hand’ hardware (which I totally appreciate the risk and i don’t mind these in theory, but not in this room and especially not as cabinetry hardware), and he chose the color of cabinetry and the color of the walls.  If Hilary had done it on her own, i think it could have turned out great with the white cabinetry and the red countertops that she wanted.   Oh and stanley made that thing above the sink, which is weird like in a tanning mom kinda way not in a Lady gaga kinda way.  (and guess which one i’m going to be for halloween?)

Thumbs down, i will never hang loose, worst hand job ever. I could keep going, ‘hand puns’ are easy, but it was hands down not my jam.

His hosting was kinda funny because he admitted really quickly that he is  “a dorky, cheezy-saying-line kinda guy”. Yes, i concur, Stanley.  I would watch his show, but probably not for the right reasons.  Hilary on the other hand was awesome.  The tip was lame, sure, but i still like watching her and she’s funny looks great on camera and wears cute clothes.

Up next, Mikel and Rachel.

Their sink style was country and they rolled with it and went all out.

I actually like the wallpaper that Rachel chose. Sure, its not totally functional and sure, it was too much for that wall without breaking it up, but i wasn’t as offended as the judges were.  I think if they had more upper cabinets (like Mikel wanted) the wallpaper wouldn’t have made the room look so small.

I like the color combo of red/grey/whites and woods.  And i like the flooring they chose. I’m slightly non-plussed, but i don’t think they failed that bad.  Mikel chose the table/chairs and chandelier and they were all good (although yes, it got totally lost in the wallpaper). And the whole combo made the cabinetry less boring.  But it didn’t make me want to scream in ecstasy.  Only Stanley’s shocker can do that.

Hosting-wise Mikel is totally great and adorable and i want to watch him. I love his accent. I love his sense of humor.  He’s still not performing up to par, but i want him to stay every week. I would watch him on the tv, i would. Rachel is dunzo. She is super super nice and sweet, but not quite compelling enough. I mean, i have a lot of tv to watch every week so for me to prioritize something it means that they have to be magnetic and interesting on camera, and she’s not quite coming off that way.

Stanley and Rachel went home. Britany and Danielle won and my two favorites, Hilary and Mikel made it through to the next week.

Here’s to hoping Mikel steps it up and Hilary keeps being herself.  Both of them have the best style and the most interesting personalities. I think i’m not the only one that wants them to have a joint show.  It would be hilarious. Chemistry on camera is crazy important and they have it.

Overall a good kithen challenge, but i’m excited for next week. Down to four. And its my favorite four.  Nice job, judges.