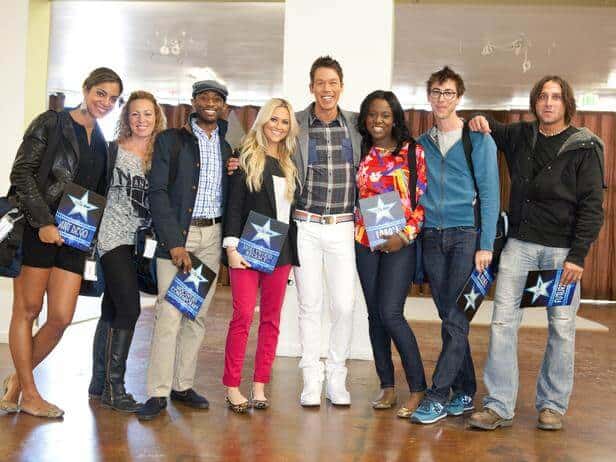 So sorry that this took me so long. I’ve been on the road and my computer has a weird virus where i can’t view any videos online.  So i just watched this episode and i loved it.  The big winners this week are the producers in my mind for sending the designers to prop houses and giving them what seemed like a lot of help from contractors.  The prop houses have EVERYTHING you can think of, although i’m sure there were some restrictions – i saw very little accessorizing this week so maybe they didn’t have the time to shop and wrap them up, but otherwise it seemed like skys the limit.

Here’s the challenge:  They designers had to create a loungy party space based on a time period/style in 2 days in celebration of hollywoods 125th birthday.  That is not very many days, you guys.  The ‘before’ space looked like this:

It’s pretty daunting.  No sense of intimacy at all.  But i love this challenge so much….I think it shows knowledge of time periods as well as taste and style.  They had lots of resources and lots of help.
There were some superior rooms, soooo great. But also some kinda big failures.
We’ll start with the good ones…

Britany lucked out and drew Hollywood Regency, a style she knows and loves.  Here’s what she did:

It’s good.  Super strong, high contrast colors, obvious focal point, tons of architectural details.  You could take ‘hollywood regency’ in so many different ways, and possibly crazier ways, but in two days i think she did a killer job.
As a monday morning quarterback i do of course wish there were more vintage items and the color palette isn’t totally my jam, but again i think its a super pulled together, well balanced, well composed room for 2 days.

They clearly had a florist this week.  Remind me never to hire him or her.

Britany should have won this week but her ‘live hosting’ was off and she flubbed a bunch.  Speaking in front of a huge audience and cameras with a days notice is very, very hard.  I think with practice she could be great. Yes, i would like to see more personality from her, but it could also all be in the editing.

Danielle scored art deco which i’m a massive fan of, by the way.  Always have been.  And i like her room, i do.

Those sofa/chairs are pretty dope, and the room is totally well composed.  I love the shell focal point (in theory more than in actuality).  She chose to do the floors in peach and black which i thought was EXTREMELY risky but i liked how it turned out.

Brown, black, peach and creams…..i don’t know, the color palette isn’t doing it for me. its just not ma thing.   It’s sophisticated and moody, but just so dark and masculine.  Brown is the one color that i just never want to be around or design with. I use wood tones instead and natural fibers to bring in that warmth, but i think i just don’t really like brown that much.  Personal preference.

Art deco was full of dark greens and dark red tones, which can be scary but can also be beautiful if done right.  Her hosting was fine.  But again, they had to do live hosting – public speaking basically which can be extremely nerve racking if you aren’t used to it.  (i’ve since gone to coaching for it and have improved like 1 million percent, by the way….so practice kinda does work).  Regardless, i like Danielle.  She’s a good designer, she has good style and i think she is likeable.

Yeah!!! I love Hilary, i do.  Personality-wise she is who i want to watch the most right now. I get excited when she comes on camera and she is my new prediction to take it home.

She drew the 80’s time period and while i iked her room on the show, in these pics I’m way less into it. She painted the floor all mondrian-like and i liked it.  She put pvc piping as the ‘walls’ with studded trimming.  Overall design wise it was a fun reference to the 80’s and definitely had a lot of cheese like the 80’s, too.  I”m not freaking out, but there are some good moments here.
But she’s funny and her Deloreon joke was good – just sadly not so well received.  I want her on the network.

Yes Khris, i agree we should all have more mirrored balls.  I mean, look how gorgous these massive mirrored graphic spheres are.

It just doesn’t feel like the 70’s. Its way more 60’s.  I love some of the furniture he chose, don’t get me wrong. But they aren’t iconic furniture from the 70’s.  The wood walls are 70’s, sure, the colors are a bit cuckoo.  And the kicker is the sofa shoved in the corner.  Totally baffling. Why is the hanging chair so high? dunno.   I love that hot pink chair and ottoman, that might be the 70’s, not sure…but i like it.

Whatever, i don’t want to beat a dead horse.  With the way the others said goodbye to him i’m assuming he’s actually a really great person – they all loved him.  His live hosting was not exactly easy to watch.  Lets just say it was his time.

I think he is creative and has a point of view. This week, though, his hosting and weird room doomed him.
Ah, Mikkel.

Not awesome, Mikkel. But he knew that.  I like him too much to go on and on about it, but its disappointing to say the least. I love his personality and his style, but he froze up this week. And i’ve totally been there.  This is also a good lesson of what works on TV. White just doesn’t work very well without pretty natural sunlight.  White works in beautifully photographed rooms with lots of controlled light bouncing around and photoshop to give it more texture and depth, but not in spaces with florescent lights. it just looks laboratory.

It’s not great. But i’m still rooting for him.  He’s gotta step it up, which is what i’m sure everyone was saying about me at the time.  Don’t freeze, Mikkel.  You can do it.
Up next:  Rachel.

Rachel pulled ‘victorian’ which she was unhappy about, but i would have been PSYCHED.  Sure, it can be terrible and cheezy and full of dust and bunnies and doilies.  But it can also be so beautiful and old world and romantic and feminine full of beautiful florals and ornate tufted furniture.  I have a crazy english grandma inside of me, that’s no secret so i could have killed this one.
But rachel didn’t, unfortunately.

I’m so not in the mood to tear this room apart, she’s too nice. The one thing about the challenge that i didn’t understand was whether the styles were supposed to be totally accurate to that time period or a modern version of it.  Maybe Rachel didn’t understand either.  It looks like she was trying to do a modern take on it, but it just no worky.

I think she is missing her family and sabotaging this competition a little.  She’s freezing and it makes me sad. Pull yourself together, Rachel, you killed it the first two challenges, don’t give up now.

I like that sofa and two chairs – totally weird and sculptural.  But how he laid it out……oh man….

Furniture on angles = weird…… Just don’t do it.

Look at that table.  i instinctually clench every orifice in my body when i see it.
Such a labial tabial.

Also maybe don’t use those fingers next to that table, Stan.  Shocker.
But he’s still growing on me and he seems to get along with everyone else so i like that.
All in all, such a good episode.  We saw real design chops considering the time constraint was TWO DAYS. Thank you so much HGTV for letting them go to a prop house, it showed us such variety and really set the best apart from the not so best.
My current wants/hopes/predictions:
1. Hilary
2. Britany/Mikkel
3. Danielle
4. Rachel
Hilary and Mikkel have the most likeable personalities but i know how editing works and yes, its tricky. I think i came off kinda boring and wide-eyed and bumbling on my season.  And i’m not.  So while i like Danielle and Britany’s styles the most, i just want to see more personality, more humor, more something.
But we have 4 more weeks and as it gets down to the final 6 you do end up seeing so much more of their personalities so stay tuned.
As of right now, though, who do you guys want to win?