You all remember Bri and Arian’s apartment, right? Well I tried not to show you the credenza so I could do this post on it, and hopefully you’ve slept in the last three months while waiting for it because here it finally is.

When we started, Bri and Arian had their TV on this bad boy — a mid-century dresser retrofitted to be a media unit. It was so not bad, but it also just wasn’t awesome. It was dark, clunky, and too small for that giant TV. Bri hated it and it totally bummed her out.

But the piece itself wasn’t the biggest challenge  — there are a lot of good credenzas out there — it was all the media components that didn’t fit inside the piece that were really hard to design around. Arian is super into high tech media, specifically audio, and NOT having really good sound wasn’t really an option; it was one of his only deal breakers. So he needed really good speakers, left, center, and right – not just one in the middle (which of course I proposed before I, too, became an audio person). More on that later …

So we picked out some new speakers, the JBL Studo 530, and I designed the credenza to do these three things:

1. Lighten the space while still working with the mid-century modern vibe.

2. Be larger and better proportioned to the TV and the room.

3. Hide the media components that could be hidden (with sliding doors as opposed to cupboards that stick out into the room) and yet leave out the audio that needed to be exposed, but make them look more attractive.

So I started drawing, which I don’t do well so thank God for the invention of the ruler. 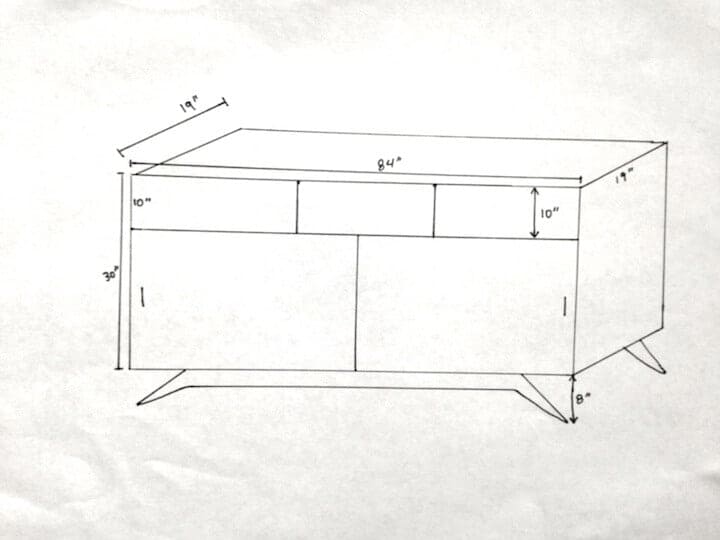 The TV is 60 inches wide so I knew that I wanted it to be at least one foot on either side, so the credenza was proportioned to the TV= 84 inches. If it were a massive room, it could’ve even been longer, but the space isn’t huge so 84 inches was about the longest I could go without the piece taking over the room. The depth is relatively standard, but we made sure to measure the components inside and make sure that they would all fit with the doors shut (including the chord things that stick out at the back). The height was more negotiable but I decided that 30 inches would work nicely based on how high they wanted to view their TV. I measured the speakers and left an inch of room just in case, and then I measured the components and made sure there was plenty of space inside the unit itself. There was a lot of measuring, and I, Emily Henderson, am NOT a terribly good measure taker but I got through it.

Next I took it to get some quotes. I know you are asking, “How do you find furniture builders?” and it’s really easy and difficult at the same time. I knew a guy who knew a guy and unfortunately I promised the guy I got the name from that I wouldn’t tell you, BUT you can also do these things:

1. Go on Craigslist and post an ad. Obviously make sure that once they respond that they show you pieces they have built so you know they aren’t just dudes desperate for a gig. These days there are quite a few of them online, at least in LA — good and bad.

2. Ask around. This is way more difficult unless you are in the habit of asking your refinisher to ask their brother who is a furniture delivery dude if he knows anyone that makes furniture. This is what I did, but at the same time I obviously have a bunch of dudes that work in the arena.

Anyway, I found my dude and he’s awesome. The quote was $1, 200, which I thought was totally fair for a HUGE piece of furniture that is totally customized, with beautiful joints and beautiful wood veneer on the inside. So after a week, I went to go visit the piece: 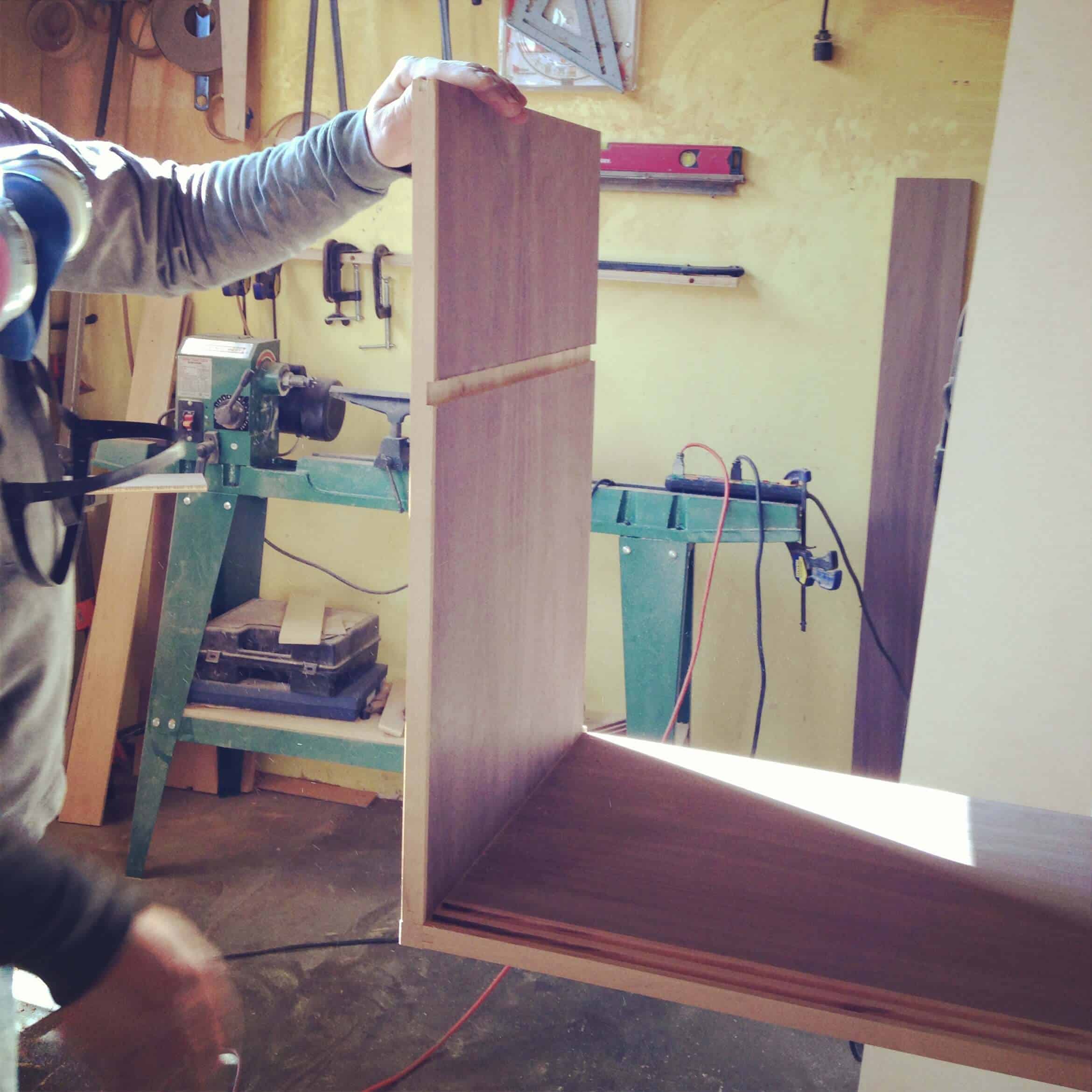 It was coming together, indeed. I decided on doing the outside a clean paintable wood because I was going to have it lacquered white. BUT Bri and Arian really still wanted some wood so we decided to do two of the three panels (yes, he suggested adding a panel in between the two sliders) made of pretty stained wood. And then we figured since the components were black, then the inside should be dark so I went for the same stain inside the piece. 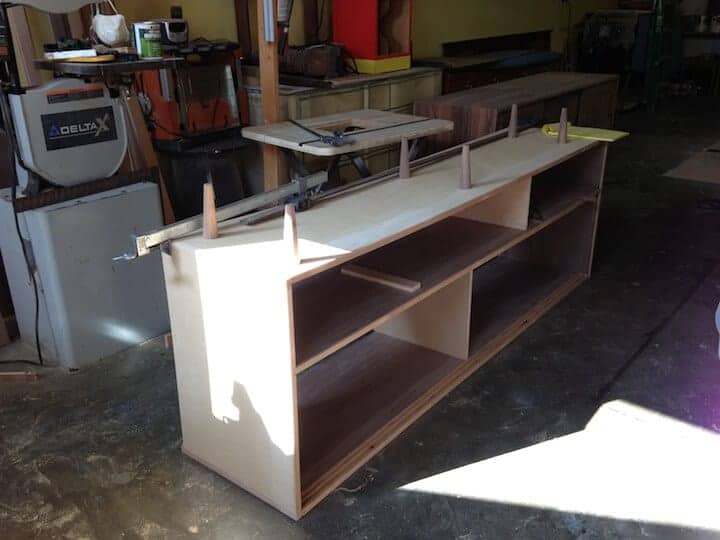 One week later it was even closer to being done. We had to change out the legs from the ones in the drawing because with all the measurements we realized that the legs could be no more than 6 inches tall in order for the piece to not to be too gigantic, so instead we opted for the mid-century style peg legs, and six of them to keep it all sturdy. The piece is right side up in this pic, with the legs on top, but that was just to show me how the feet were going to fit, and how spaced apart they should be, etc.  The piece was coming along …

And then one week later: 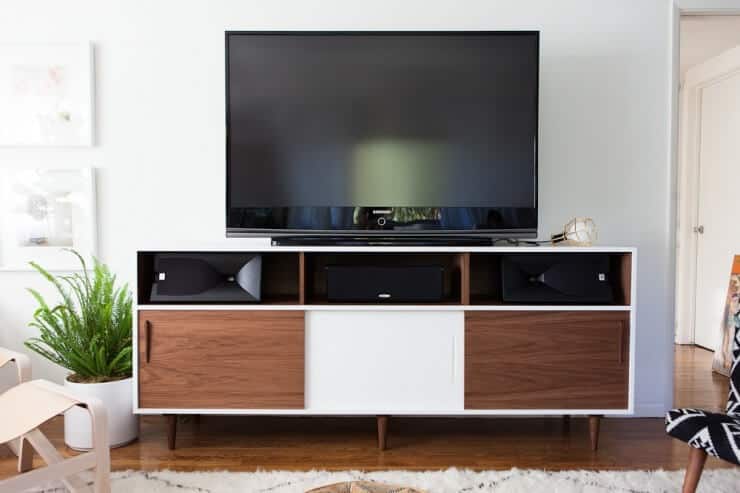 BOOM. Dunzo. (Photo by the lovely Laure Joliet) We were all VERY happy with the final result, thank god, because with custom you don’t get to return anything obviously so you are taking a bit of a risk. The size was wildly better because it was way more proportioned to the TV, and in fact made the TV less noticeable and smaller. Before when it was on the wood dresser, it dwarfed the media unit, and therefore made the TV look extra giant. Now it just looks like a dope TV, ready for me to watch all my stories. With the whole top dedicated to the JBL speakers in a clean, proportioned way, it drew way less attention to them and made the whole thing look more intentional. Arian got his sound, and Bri got all the rest of the media hidden inside. 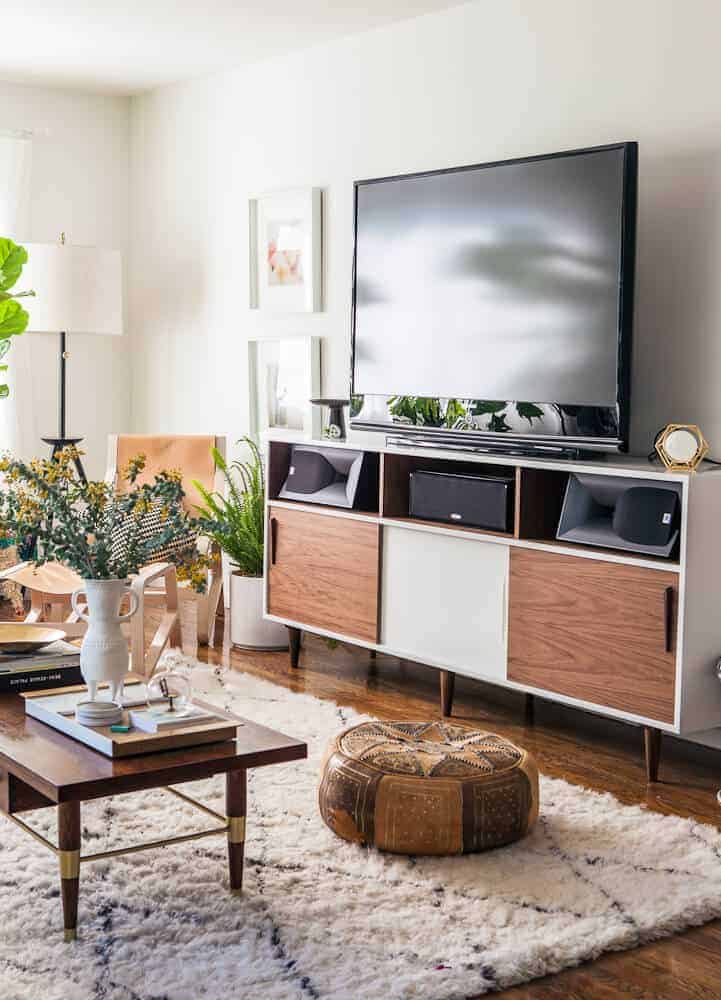 Customizing that bad boy was VERY satisfying. I know that it’s not really a very accessible tip: “Hey if you have an extra $1, 200, know a REALLY good furniture maker, can draw, and have lots of extra time on your hands and/or an interior designer on staff, go ahead and customize your furniture …” but I will say it was WAY easier than I thought it would be and turned out far better than I expected. We got something that would cost at least $3, 500 at most stores, that fit the needs of my clients EXACTLY, was one of a kind, AND was designed and delivered within three weeks — all for $1, 200. 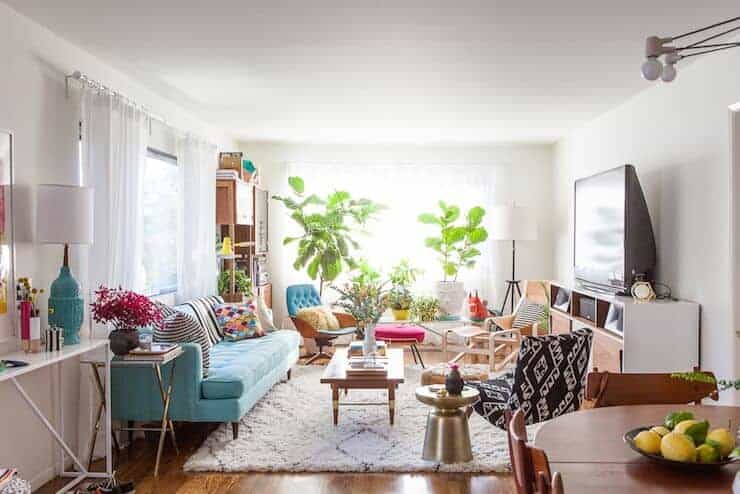 And just because it’s so satisfying, here we are again, BEFORE: 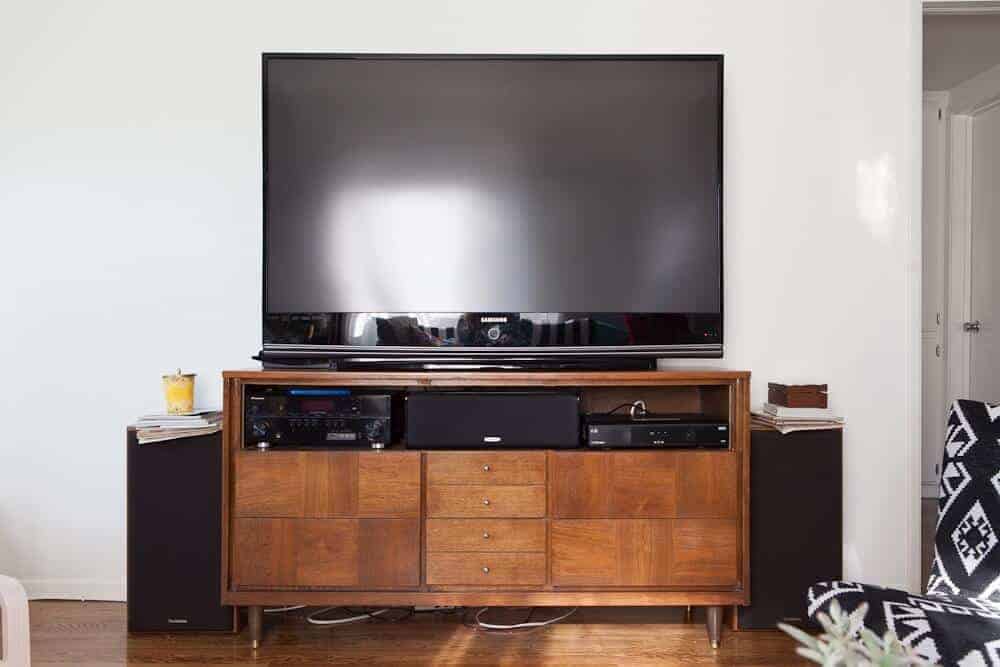 Check this post for all other shopping resources in Bri’s house. Meanwhile, what do you think? Are you slightly LESS intimidated to customize something? The design of this was inspired by some Paul McCobb pieces (that I love) from the ’60s and has also inspired the credenzas from Organic Modernism, so if you want something similar but don’t want to customize it yourself, check out their site.

Come back tomorrow for a video staring me and my/the new credenza. We’ll talk about how to mix masculine and feminine styles in the same space … and then we make out.

**This post was in partnership with JBL, but all ideas, designs, words, and opinions are totally mine.