When one has a baby one doesn’t leave the house. That baby (healthily) drains you of energy, interest in anything else,  knowledge of any news topics aside from how Kim K lost her baby weight. This goes on for 3 months at least. It’s amazing and wonderful and yet totally alienating to others. Friends come over, they feign interest in your slightly moving, cross-eyed hairless baby, you pretend to listen to their normal lives while they swear nothing has changed. It’s awesome and ultimately unavoidable. Cut to 4 months in and you are ready to see friends again, socialize and show that much more fun baby off.

During that time for me Cricut approached me to test drive their new upgraded cutting and printing machine. I wasn’t totally interested at first because I don’t really scrapbook. They told me, ‘We’ve rebranded, we’ve upgraded the machine, it’s not just for scrapbooking and we insist on coming to you to demo it’. Sure, I said. After all I could use company, I haven’t left the house in 11 days.  Please bring any souvenir from the outside world. A Us weekly will do.

Long story short, they demo’d it in my studio and it was awesome. It was very smart, precise and flexible and we struck a deal – I’d partner with them on a party (because I was READY to finally have a party and show off our baby) and a few blog posts. Wonderful! So without a birthday coming up we decided to throw a ‘Sip and see’. To be clear: this is not a party that you must have as a mom. If you have the time/effort/money then yea, throw a party every day of your life but this party/post was meant to be inspiration and ideas for any baby shower or birthday. I don’t want people walking away from this post being stressed about who they are wearing to their unborn child’s sip ‘n ‘see. 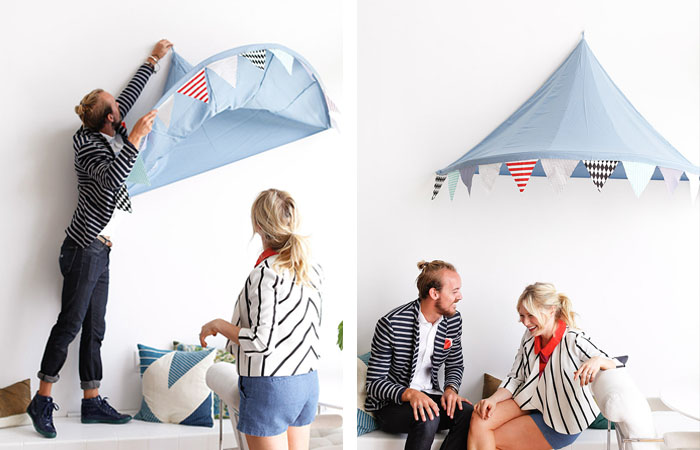 In case you don’t know what a ‘Sip ‘n See’ is it’s basically where you invite people over to sip (drink) and see (manhandle) the baby. Your best friends have met Jr, but many others in your life haven’t so it’s kinda a toasting to the baby and you making it through the first 3 months. If you are like me and like ANY excuse to make people come to you, then this is a great party to throw. Because remember what I said about the first three months up there? Yes, it was time for us to be social again.

We started by choosing a theme and since our house is kinda Scandinavian and simple with big pops of color, we decided to do ‘Scandinavian Strongman’ which is basically just a circus theme. We made an inspiration board like so: 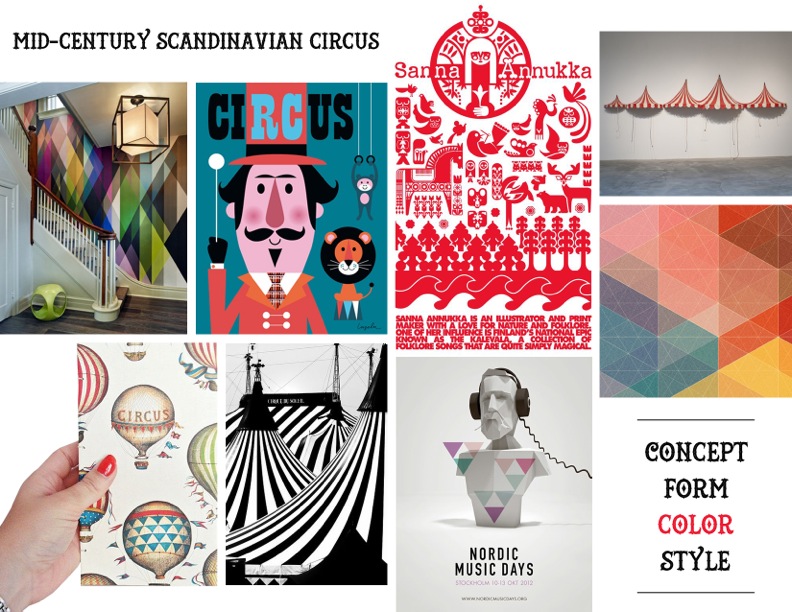 We wanted it to have big pops of color, with simple lines and not a lot of busy-ness. Clean, bright and happy – like Charlie on a good day. We started pinning and pulled together this simple, fun art direction.

That inspiration led us to these projects: 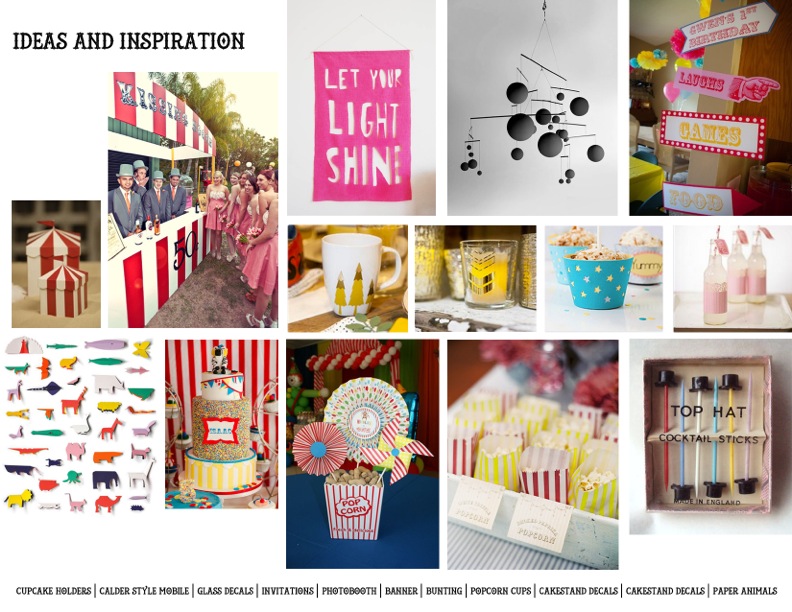 Now in a perfect world I would have created each and every one of those ideas (and you actually can using the Cricut) but as a working mom I narrowed it down to three or four that would be more doable. One can go crazy trying to craft and decal the hell out of their life, so I like to just focus on a few things so I don’t look, you know, INSANE.

So we got to work, pinning, playing, designing, sourcing, photocopying fabric into paper, choosing color palettes, and then practicing and becoming experts on the Cricut. We prepped mentally for a couple weeks and then spent a week really pulling it together. I’ll show you the DIY’s step-by-step later on, but first let’s just get into the party or else this post will be 9500 words long. 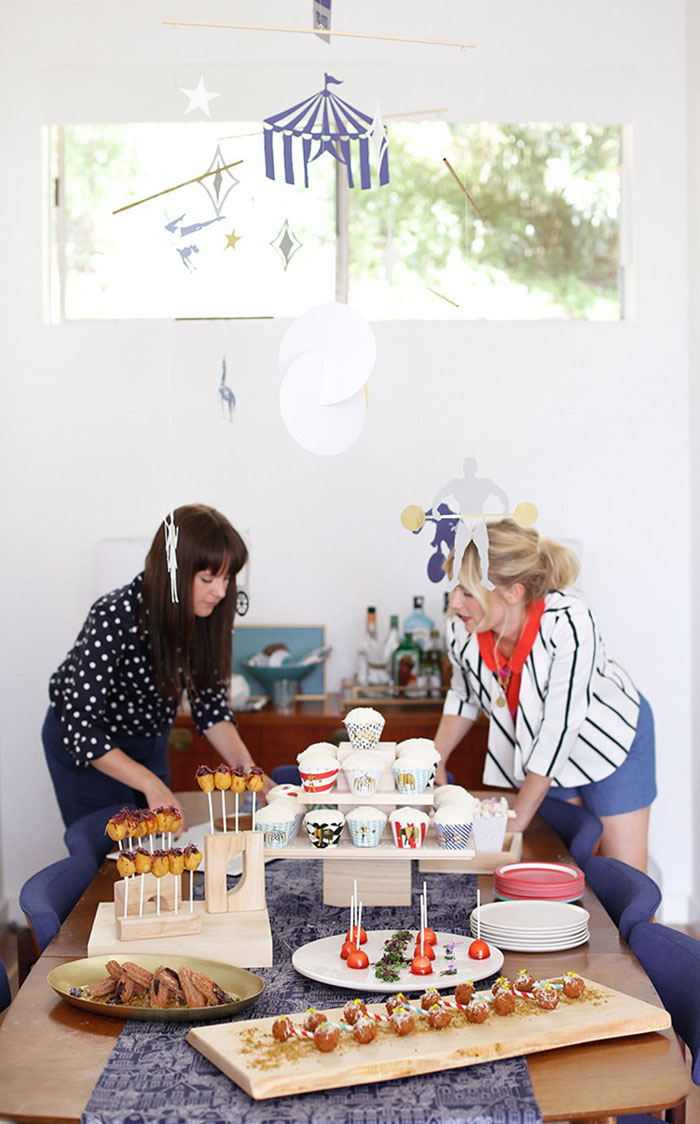 Welcome to our 5′ tall mobile/chandelier. It was (and is) one of the most fun and satisfying things I’ve ever made. It’s huge, with brass and wood arms (and yes the tutorial is coming soon).

I figured since it was for blog content I should get food and drink recipes for you and since I don’t know how to cook that I would ask my friends at  RoomForty and to help me out. Recipes to come next week, but for now know that they were meatball barbells, candied apples, churros,  corn dog lollipops and truffle/lavender popcorn. Only the most artisanal food for my non-eating baby. We wanted to do a play on circus food – but have it be more grown up. Even though there were kids at this party it was more for us grown-ups. 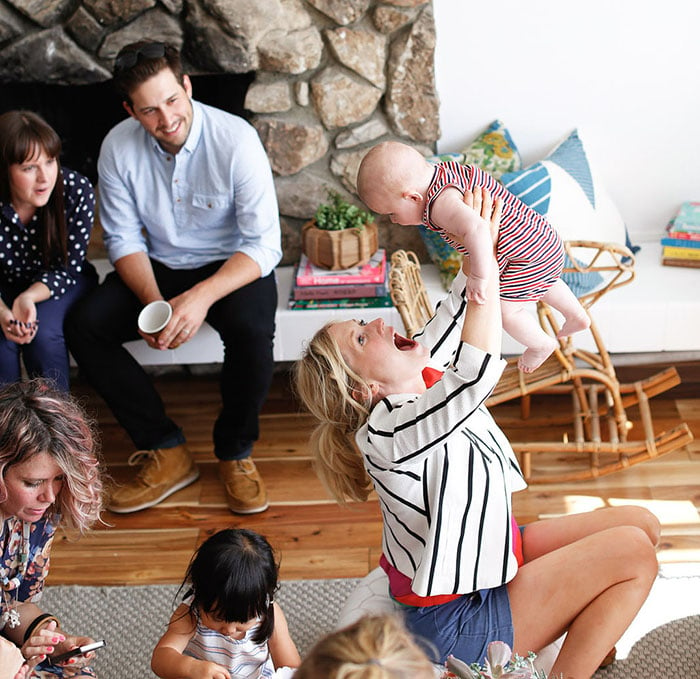 Speaking of baby, Charlie had no idea what was going on. He liked it at points but was mainly wondering why I had invited so many other parents into his room. Meanwhile please note that Jen Gotch is busy filtering an Instagram no doubt and Ruby is probably pairing adorable patterns together. As you do. Meanwhile I’m trying to make Sir Charles giggle for my friends and he’s just embarrassing me. Perform little monkey. 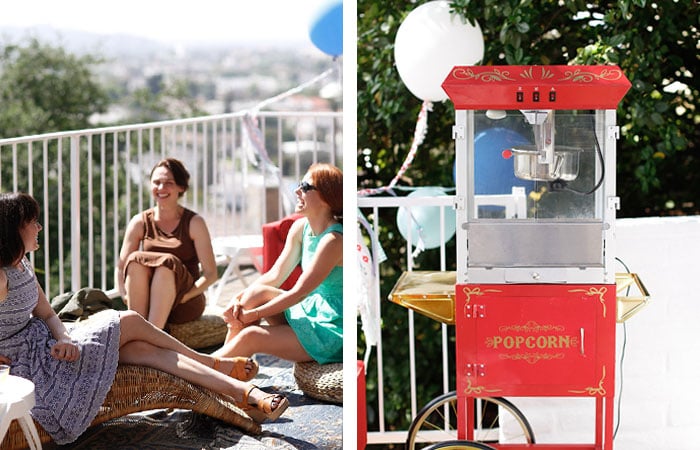 The party was inside and outside on the deck. I kept the decorations simple and paired back but with big punches. Big balloons (with strips of fabric tie-ing them down), those big tent wall things (from ikea with better/custom triangle flags) and then added the Cricut projects which were the mobile,  coasters, popcorn boxes, drink decals, cupcake holders and iron-on shirt decals. That sounds like a lot but it honestly wasn’t. Once you get started it goes SUPER fast. 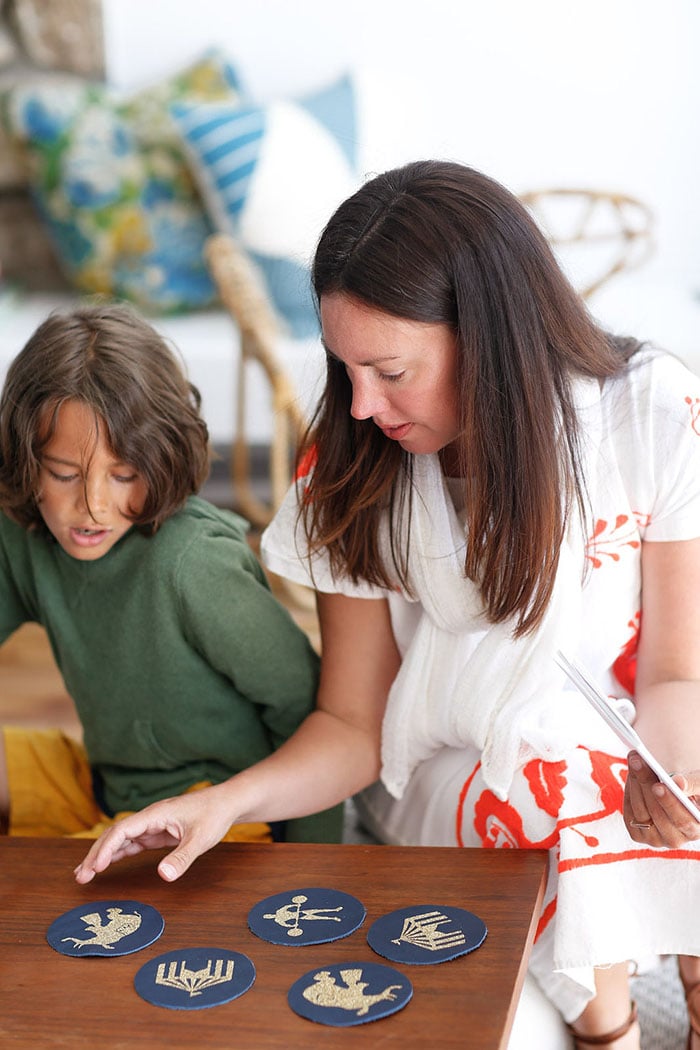 Navy leather (from Michael Levine) coasters with circus decals became the hit. It’s like a party under your drink. 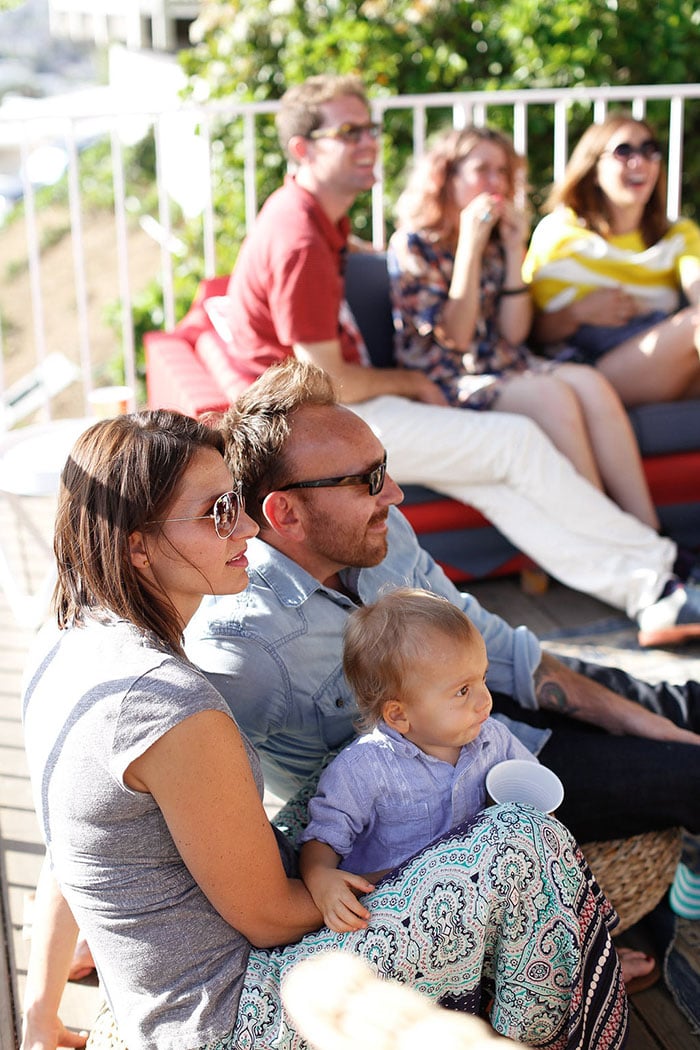 Speaking of party, out on the deck there were a lot of my favorite people getting to know each other, whilst probably telling all my secrets to each other. That is Steve Fortunato (and family) from ‘The Fig House Fortunatos’. Sounds like some sort of east-side mafia. 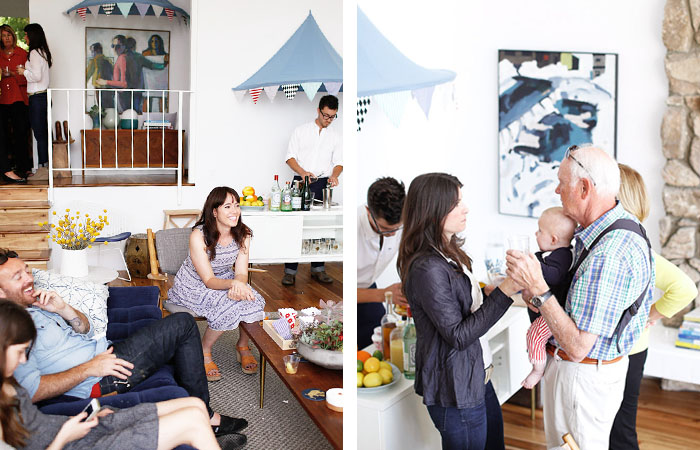 Inside, people were eating, drinking, squeezing the baby, etc. Bob (Brian’s dad) was happily wearing Charlie, and Valerie our cousin, was making him smile larger than I ever have which is why she is dead to me now. Kidding. He just loves her and it’s so cute to watch. 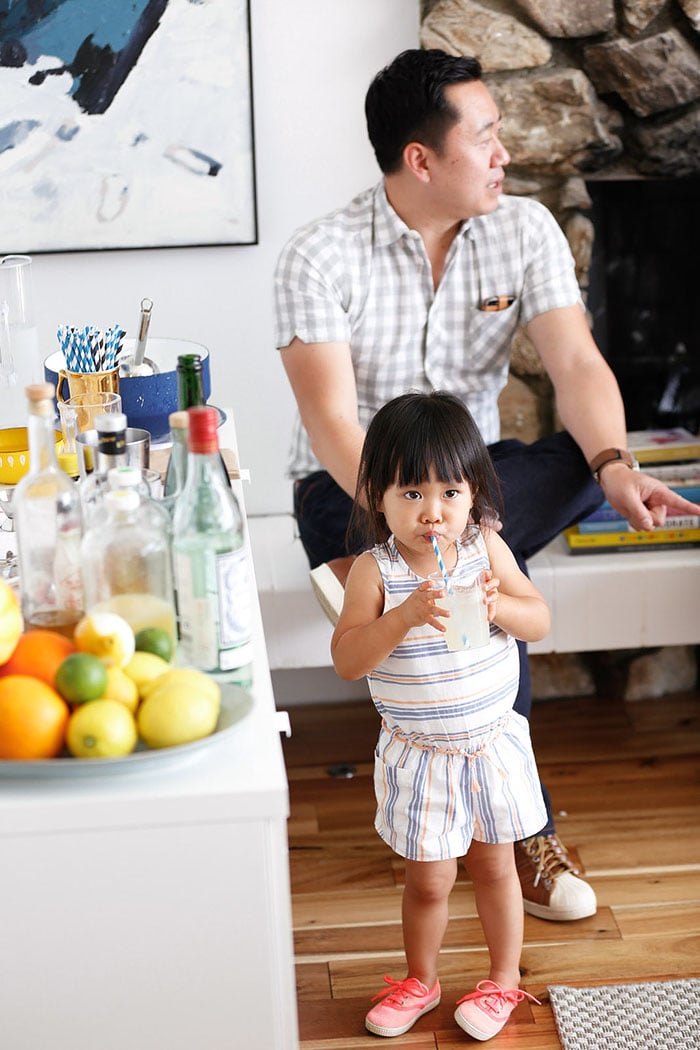 Bob let Ruby make/drink a cocktail probably because she was wearing such cute shoes. It was her reward. 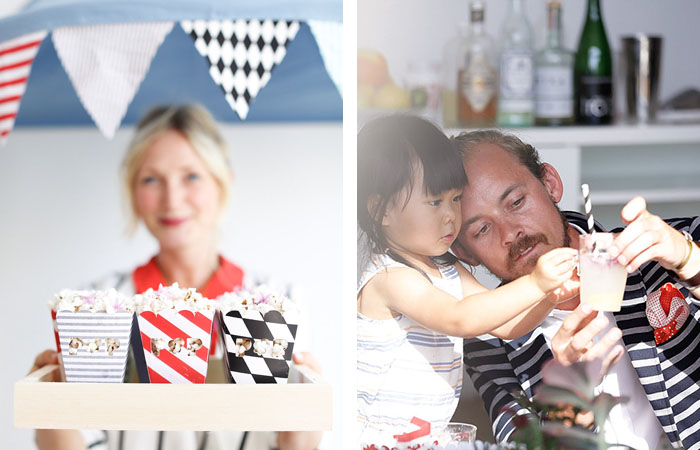 Meanwhile I handed out popcorn like the waitress I was always good at being – 10 years in the industry doesn’t let you down, folks.

Look at that beautiful food. Everyone loved it except for Charlie because he’s incapable of  knowing what to do with food when it’s in his mouth  – a fact we confirmed this week in our desperate attempt to have something new to do with our little live toy. 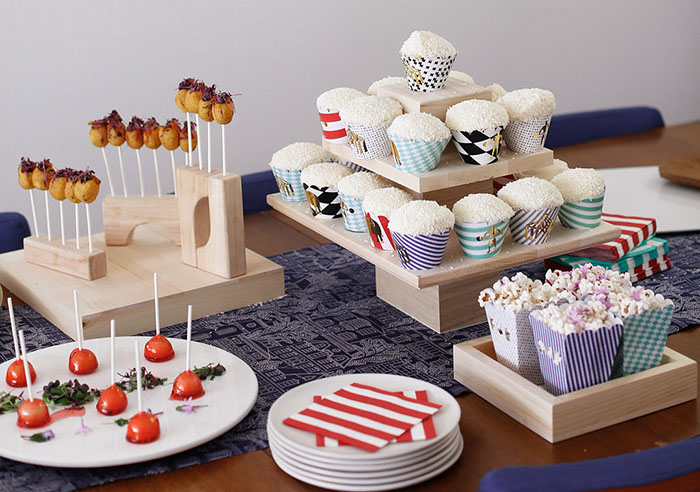 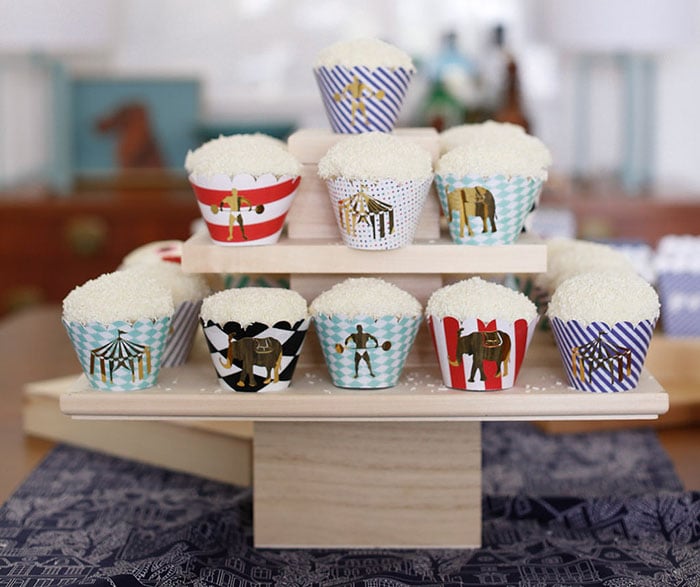 Aren’t those the cutest cupcake holders you’ve ever seen? I have never made them before nor knew that people needed cupcake holders, but they were super easy to make and ridiculously fun to look at. More on that later where I’ll show you the whole cupcake holder DIY and you can download the template yourself from the Cricut design space.

Charlie met all our friends which I’m sure he remembers none of,  and while he did get tired and couldn’t nap, he was generally pretty happy to be around new people. He’s like his mom – the more the merrier. 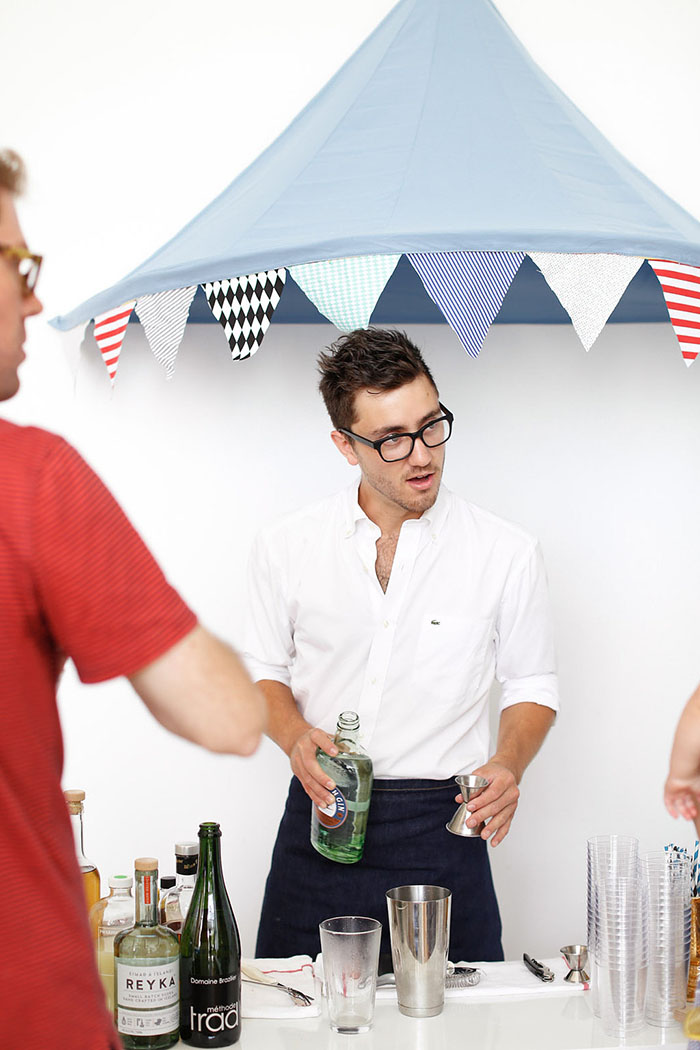 Pharmacie made the drinks, which were amazing, and before you get all, ‘ok, so you had a bartender at your kids party?’ know that a. it was a collaboration for the blog posts, b. I’ll be posting about the recipes so you can use them and c. they are insanely delicious. Like ridiculous. I’m sure you’ve heard of them, but if you haven’t and you live in LA you are missing out on delicious cocktails in your cocktail hole. 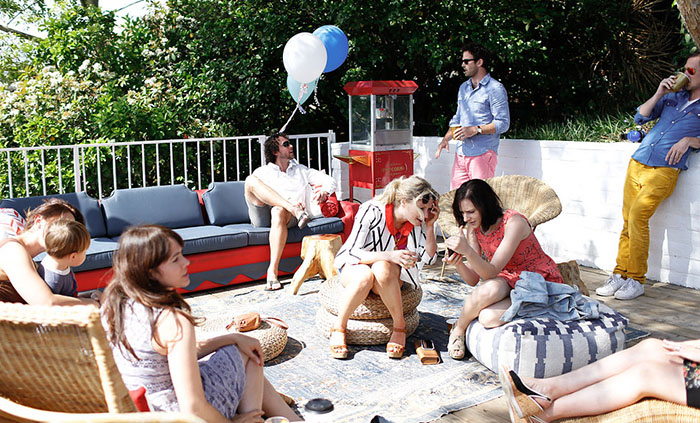 We drank and hung out with babies and sat on our weird circus sofas. It was so nice to catch up with so many friends that I hadn’t seen in months. All at one party and all coming to us. I know that this ‘sip ‘n see’ isn’t a wildly popular thing to do, but I have to say it absolutely makes sense. You don’t have time to go one by one to people’s houses, nor do you have the motivation to invite people over one by one when you have a newborn. So wait til 3 months, when his immune system is stronger and when he can smile/engage more, and invite everyone to you. I loved it. 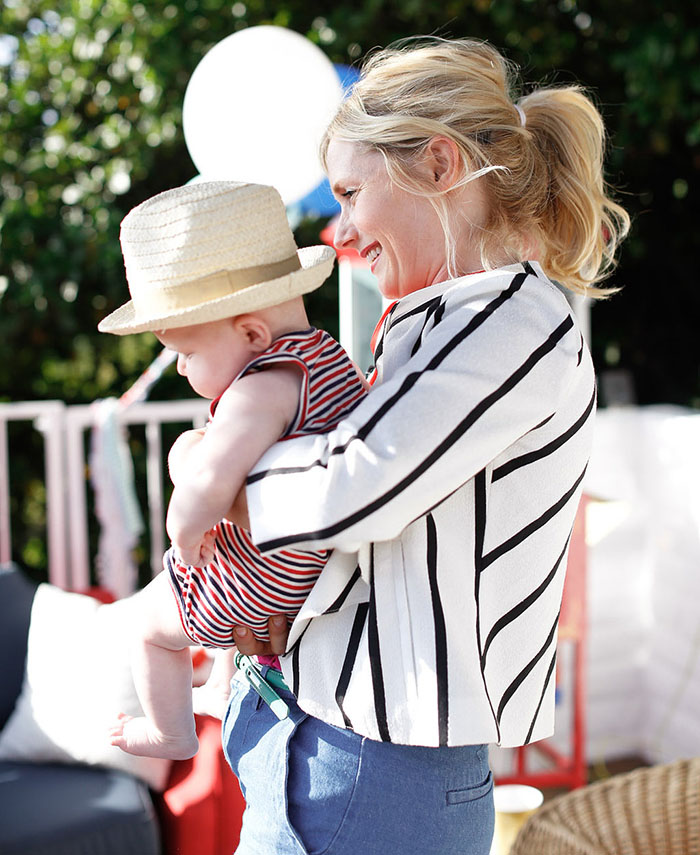 He looks like he’s asleep there and it seems as though I’m ‘Weekend at Bernies’-ing him, but I swear he was awake and telling jokes right before that photo. Look at his pink skin, that poor child got my genes and probably got a 3rd degree sunburn for those 20 minutes he was outside (don’t worry, folks, we lathered him up). 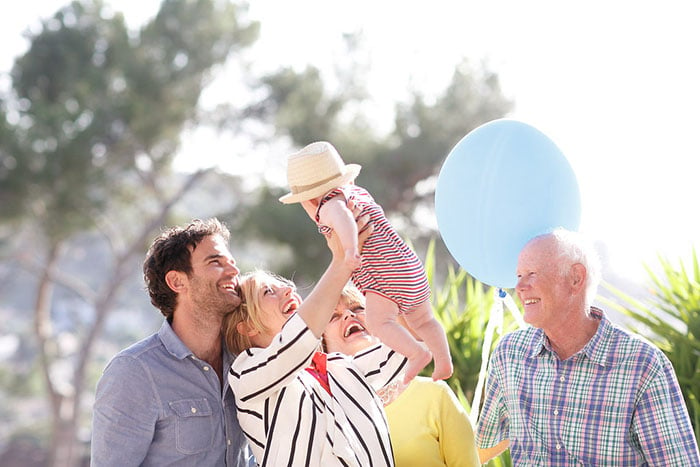 All in all, it was an awesome afternoon as is exemplified by our genuine (albeit perfectly composed) laughter in that photo. That boy doesn’t make it hard to laugh, I’ll tell you that much. If only he knew the amount of effort that went into this party for him. I kept whispering in his ear ‘do you even know how much your mommy loves you; look around!!!!’, whilst TOTALLY KIDDING, obviously. He doesn’t care; he doesn’t know, you could give him a saltine and say “Happy Presidents Day” and he would giggle like you’ve told him he won an oscar.

Because lets face it; I did it for me, our family, our friends, the blog and that little baby just got the pleasure of a lot of weird colors and lights in front of his face.

To grab your own starter kit and everything you could possibly need to create everything that we did at this party click here!

Now y’all need to watch the video by Sharkpig

Be sure to check out all of our step by step DIY’s using the Cricut machine for the Mobile, Cupcake Holders, and Leather Coasters, as well as all the delicious drink recipes!

Credits: Food by RoomForty, drinks by Pharmacie, photographs by Luke and Katherine of Max and Friends, Video by Sharkpig

From Inspiration to creation in just a few clicks!