Despite all protests, Charlie turned three in December. Even though he disobeyed us with his ‘aging’ we still threw him a little party with a few of his friends (and ours) in our new neighborhood. He LOVES dinosaurs (and cars, and dinosaur-cars, dinosaur trains, and dinosaur cars crashing into dinosaurs trains driven by dinosaurs). So we threw him – you guessed it – a dinosaur themed party, focusing the little bit of expendable energy we had on what would make a big impact for him and that he would still love. 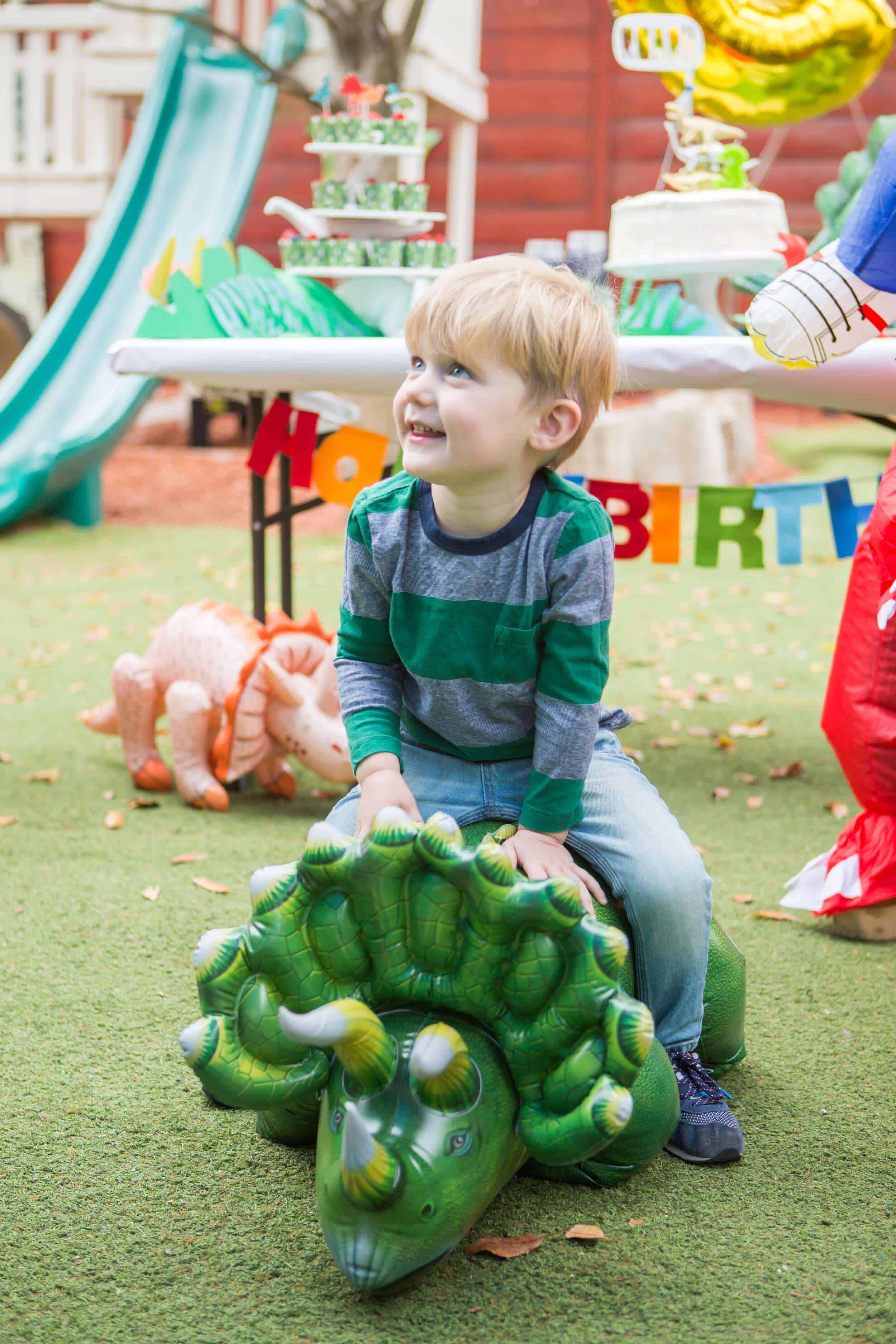 His birthday fell during the busiest time of our year (and I think it always will, sadly) so my goal was to do a lot of big impact things for him that were really easy for me to implement – this included dinosaur balloons, inflatable dinosaurs, and a couple of costumes that made him feel that this day was special. 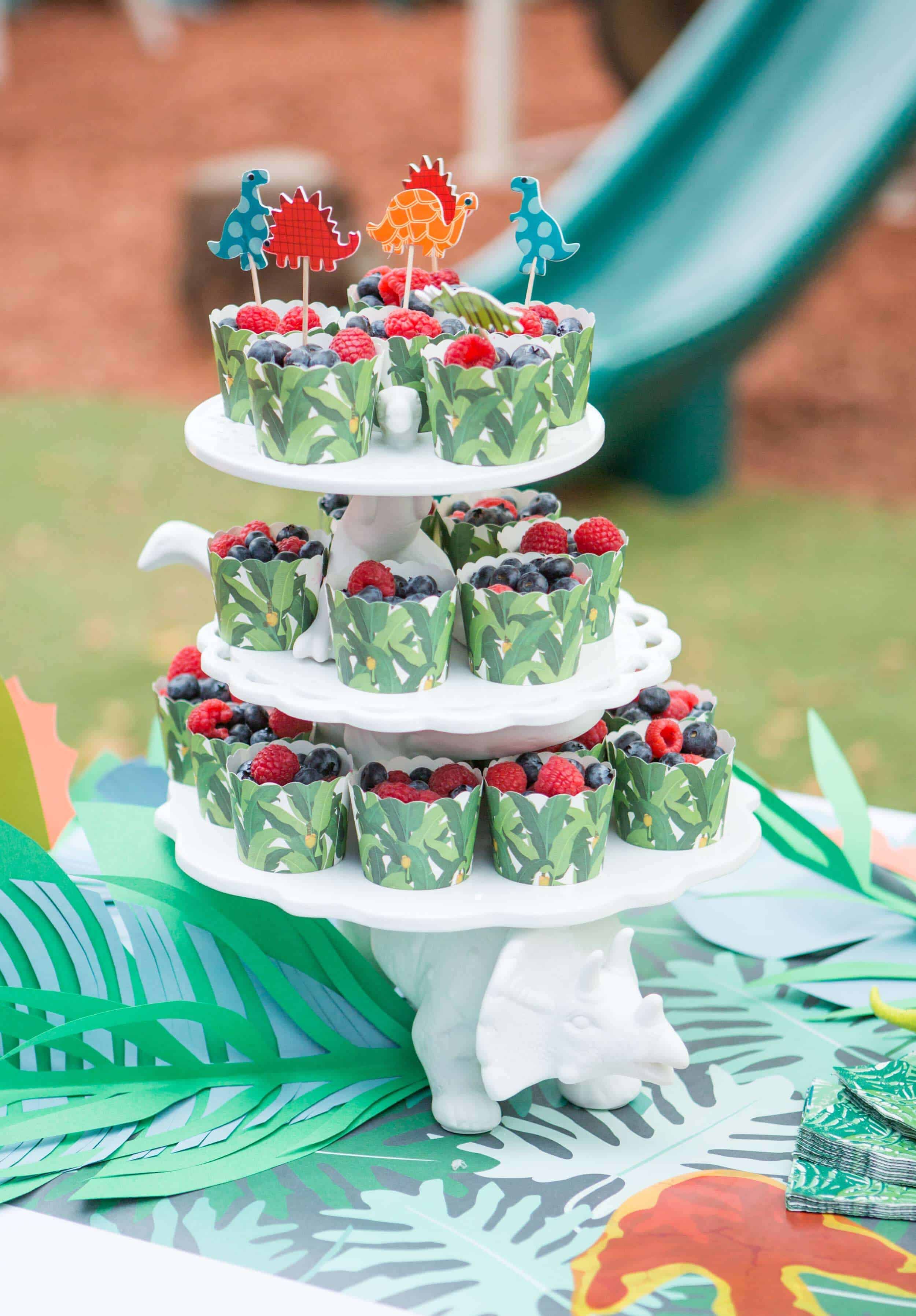 Meanwhile a new friend of mine, Royale from But First Party witnessed my overwhelmed life and offered to lend a lot of really cute dinosaur themed party decor, which made me look WAY more pulled together than I was. 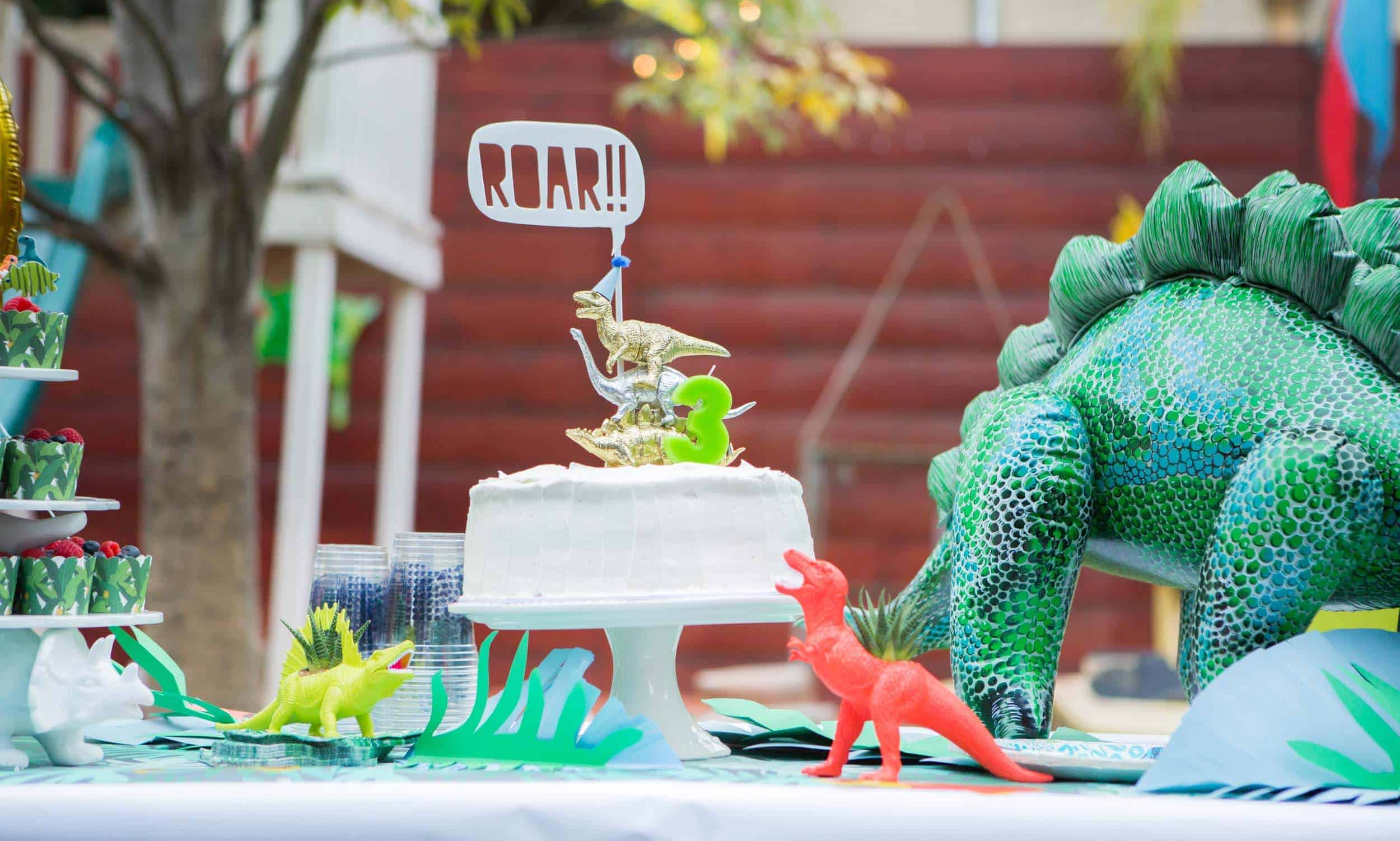 She brought that awesome dino cupcake stand, the ‘ROAR’ cake sign, the cupcake holders (in which we put berries), the paper on the table, the leaf cutouts (which she made), and those adorable dino plant holders. THANK YOU, ROYALE. 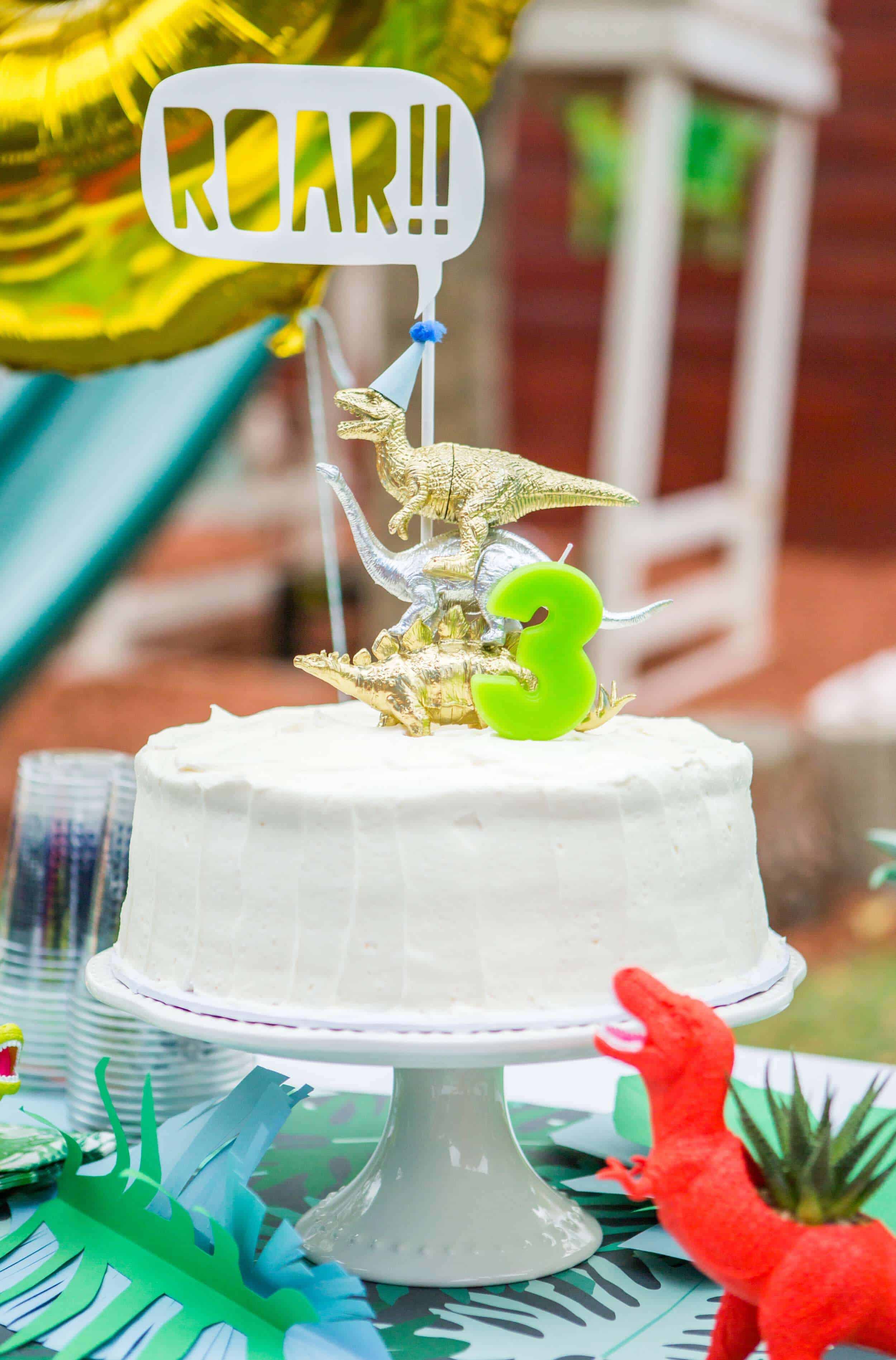 If you are interested in DIY-ing that situation I think she spray-painted plastic dinosaur figurines with metallic paint, then glued them on top of each other with epoxy. The leaves were hand cut out of construction paper and what you can’t see is that the paper plates had big claw prints cut out of them. The runner was jungle wrapping paper. 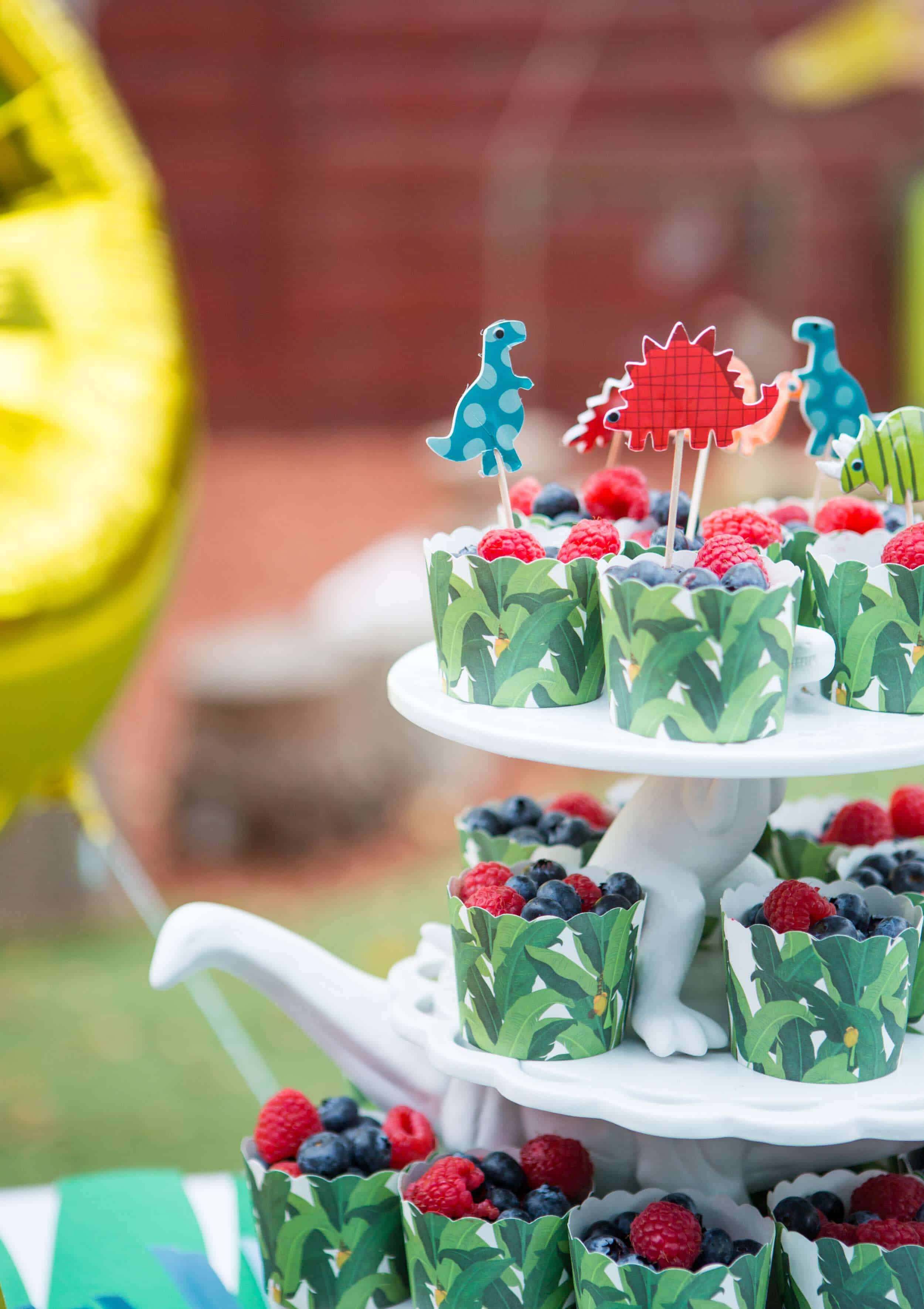 Between all the balloons and inflatables that I bought, some Target paper goods, and her cute decor we had one table that looked pretty darn cute (the rest of the tables were full of pizza boxes, juice boxes, wine, and beer). I wasn’t going to blog about it but then when I saw that cute table I thought well, why not take a few photos … 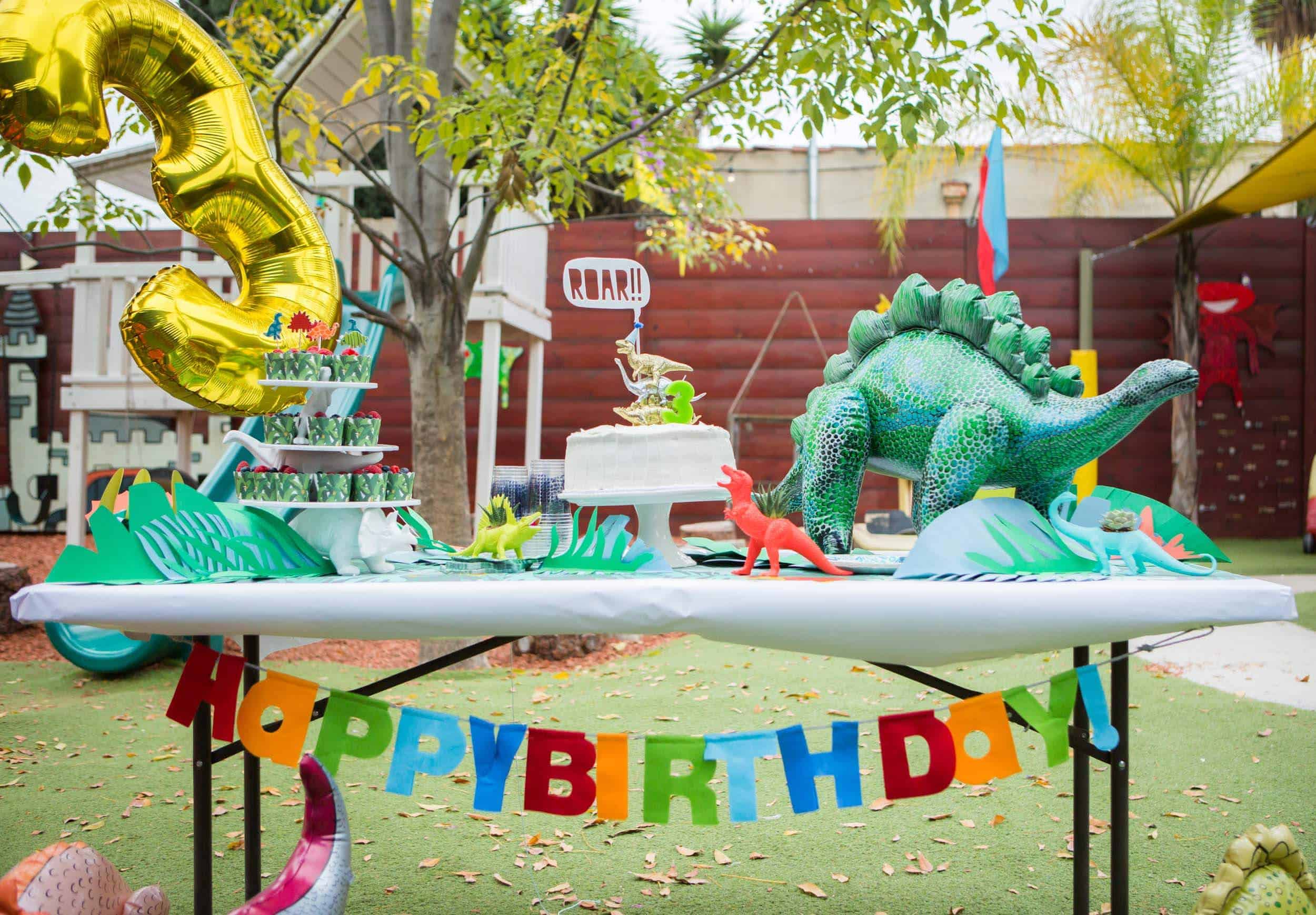 I’m of the theory that when they are 2, 3 or 4 years old (I don’t know about older kids) they really just need a place they can play safely with a few stimulating games/large creatures. So, I went on amazon and ordered like $35 worth of inflatable dinosaurs (which ended up being 10 of them). They were incredibly popular and provided fodder for a lot of wrestling both here and weeks after in our house. 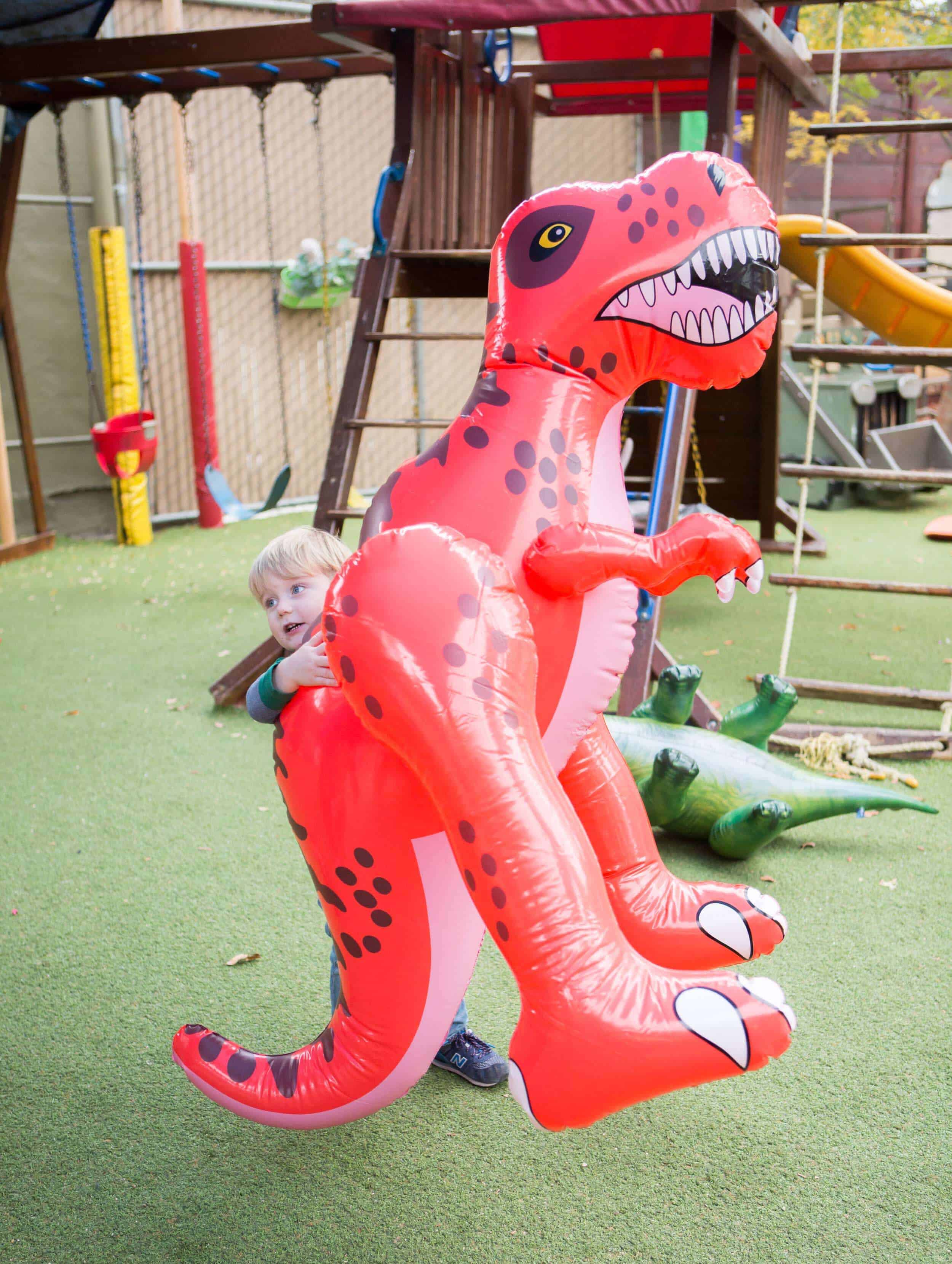 Yah, that T-rex was $7. That is A LOT of fun/joy for 700 pennies – plus unlike a balloon you can deflate it and re-inflate it many times, which we have. 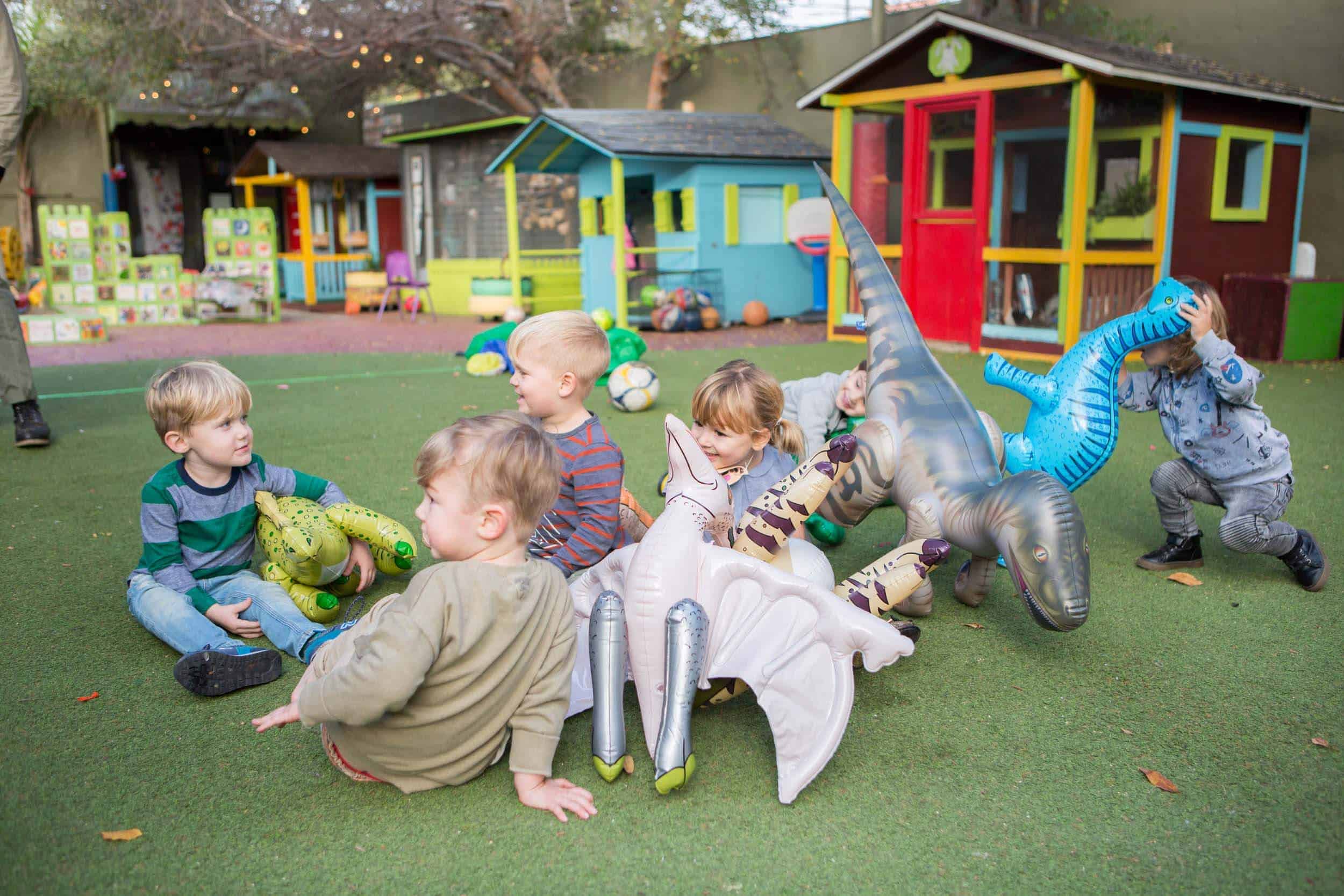 We bought these cute plates from Target and Royale brought these masks that were untouched by toddlers, but cute for us adults to look at and feel validated that we ‘tried.’ 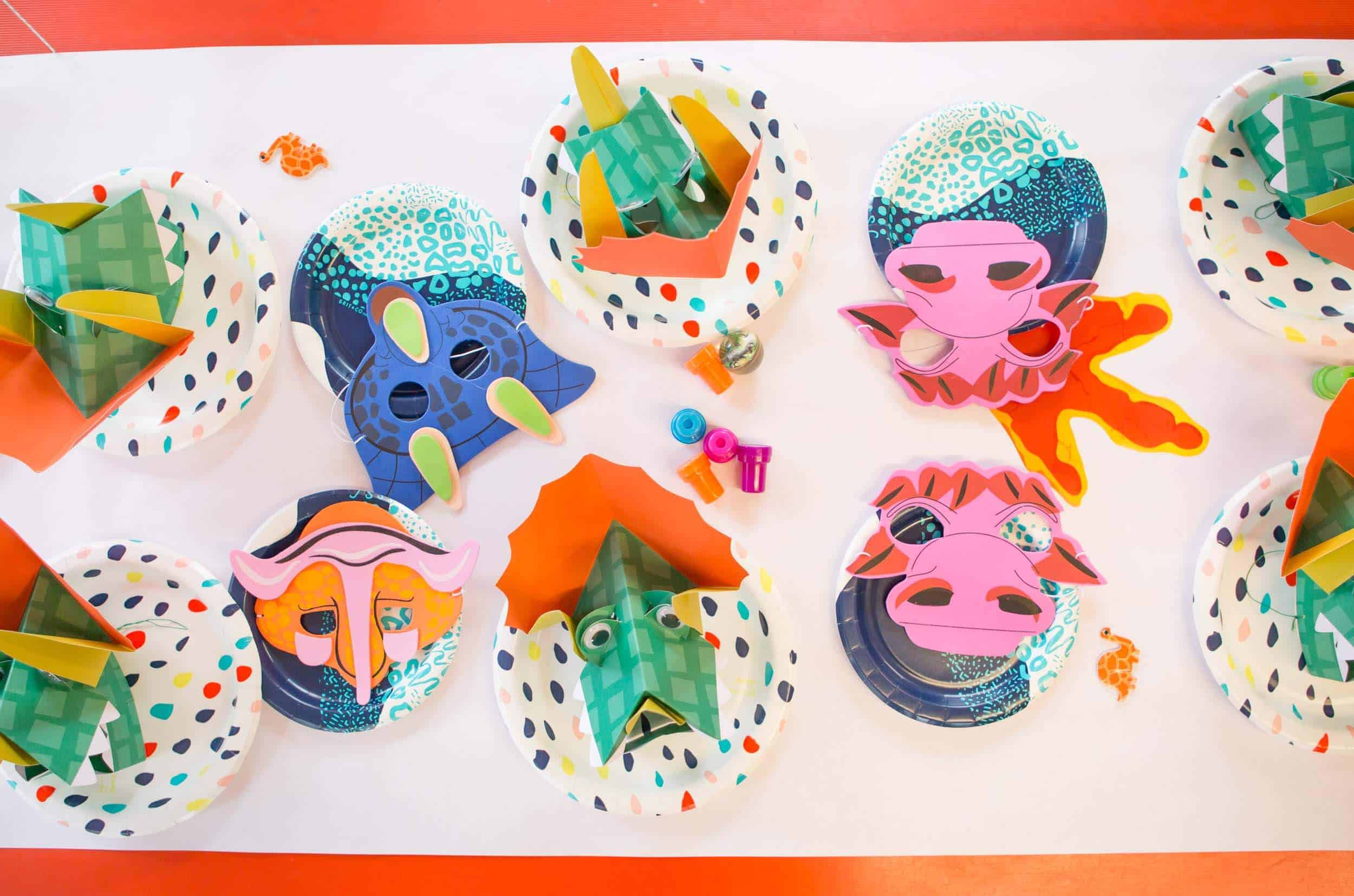 I first went to the party section of Target but I found the best stuff for us in the normal paper plate section – these are Cheeky + Brit and Co partnership plates and they had these cute ‘modern safari’ theme plates, which Charlie recognized and appreciated (ha). 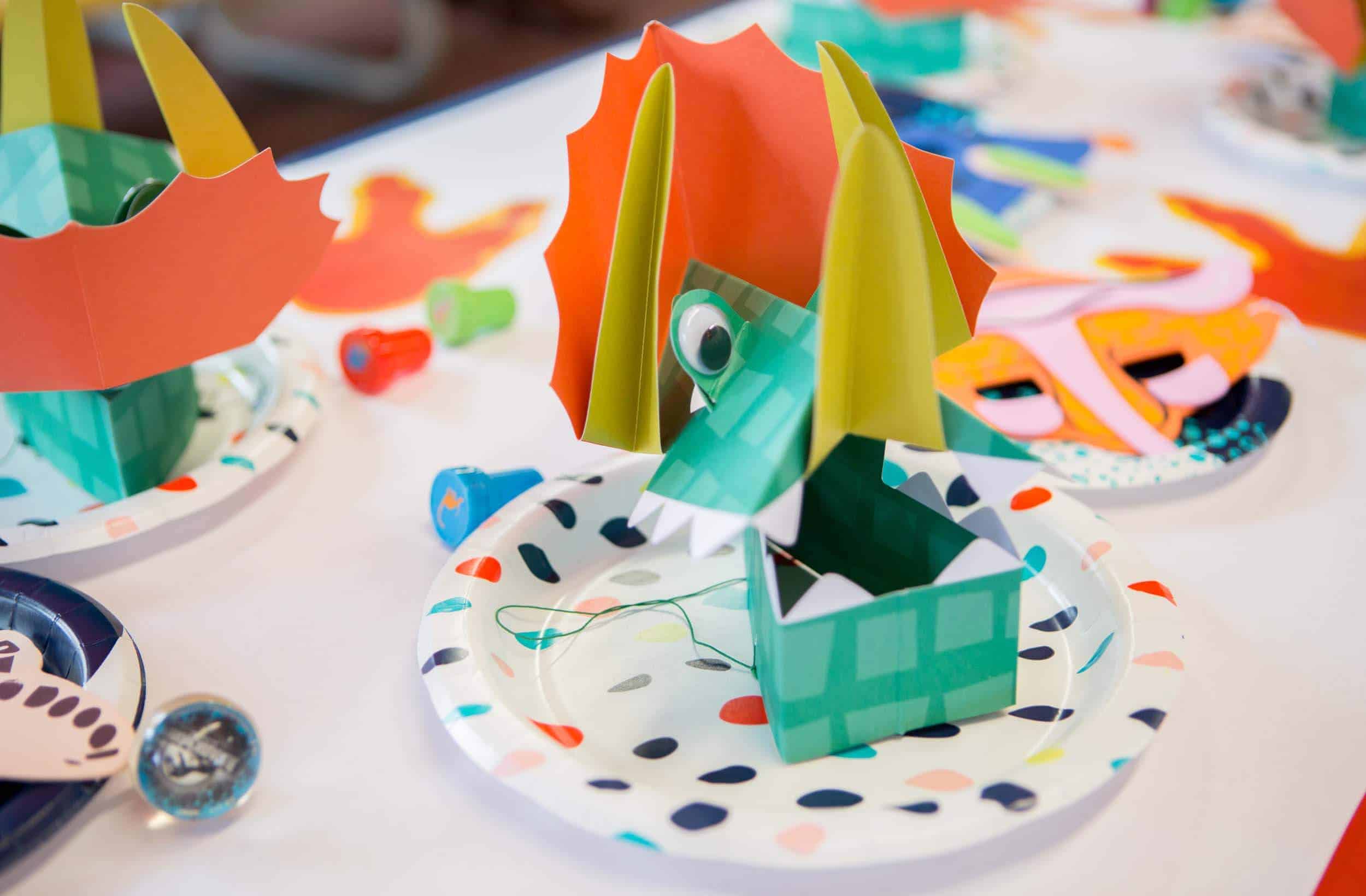 Meanwhile we feel strongly that if we wear a playful themed costume our kids will think that we care (which we do). 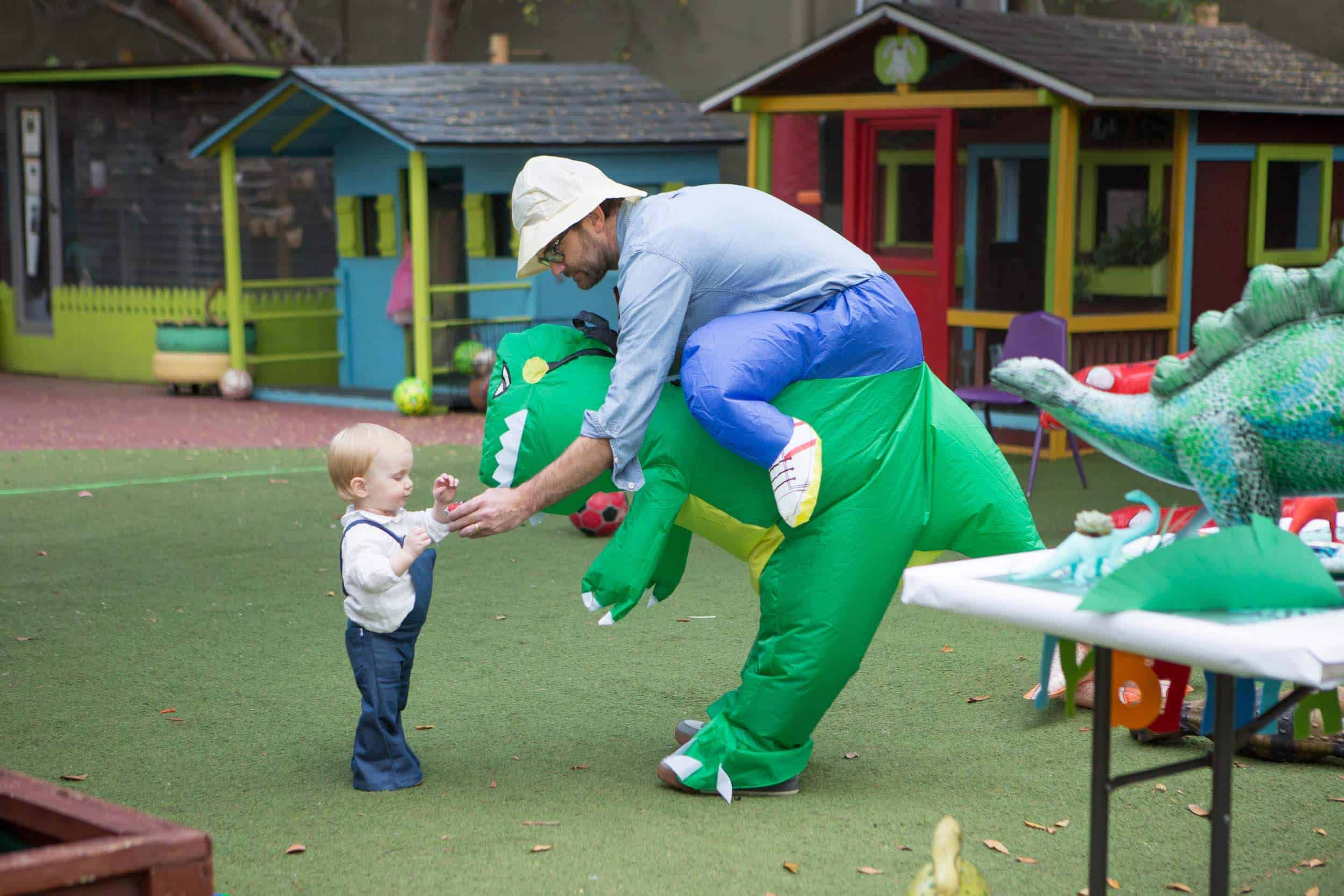 They were a success. So easy. JUST WEAR A RIDICULOUS COSTUME, BLOW UP SOME BALLOONS AND GIVE THEM CAKE.

But underneath that costume was something that I am embarrassed by, but not enough to not show you: 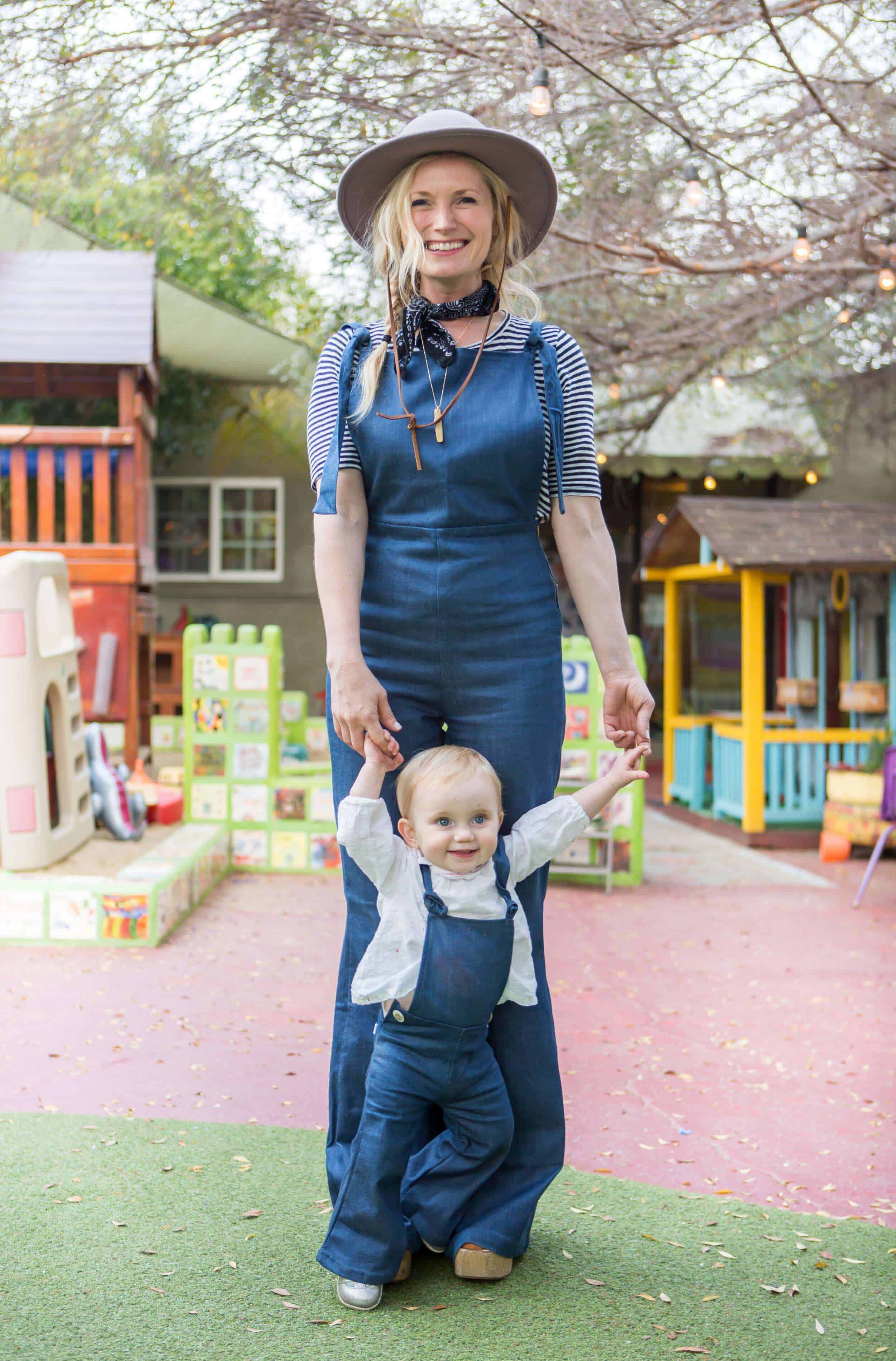 MATCHING F*&*ING OUTFITS. A couple of months ago a company, Harlow and Jade, sent these to Birdie and me. At first I thought these are adorable but there is no world in which we will wear these in public together. Then that morning, in a moment of weakness, I found them (which I had misplaced due to packing up the house) and I put those overalls on that little Bird and realized that all my disgusting maternal dreams could come true just by stepping in those amazing grown-up overalls myself. 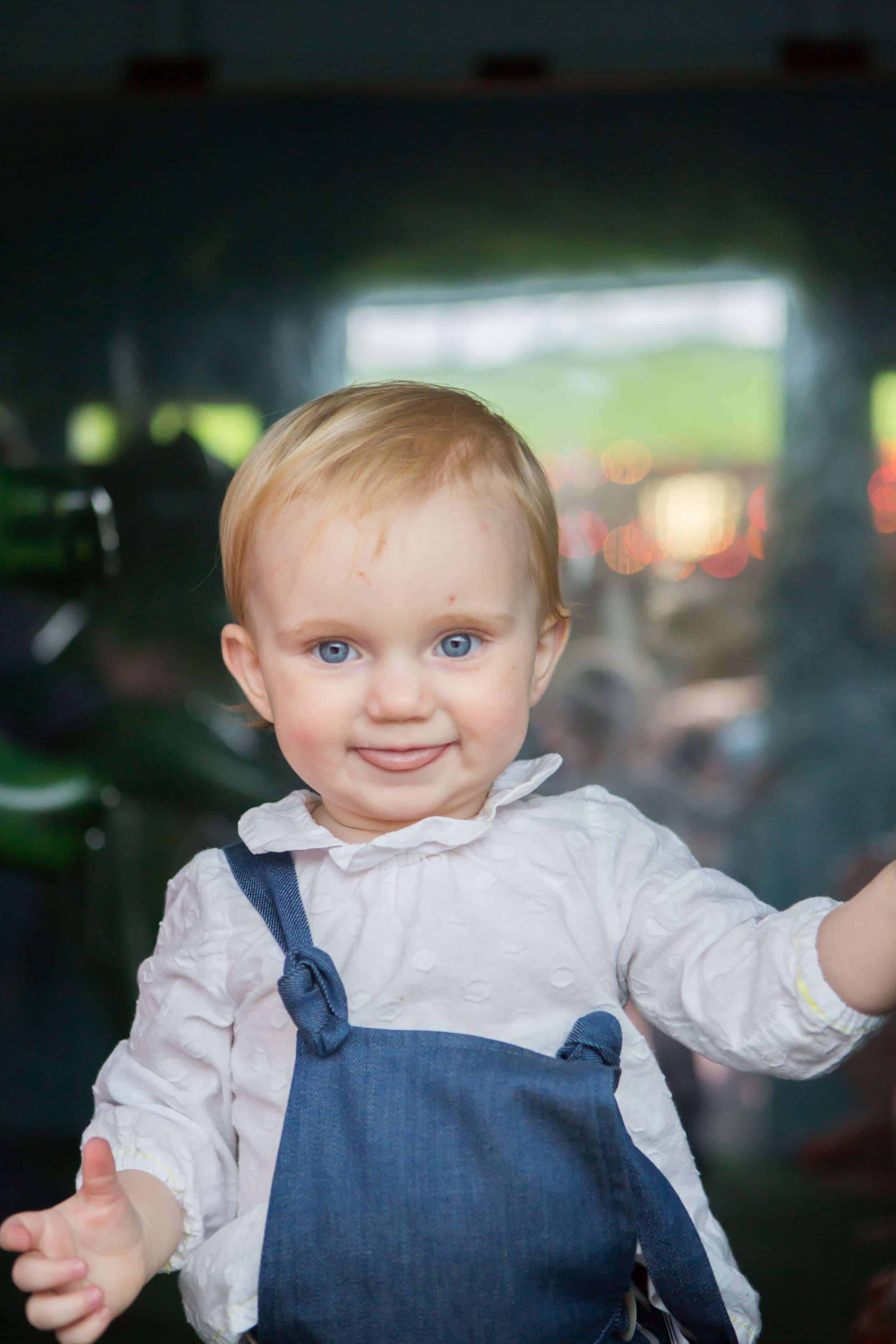 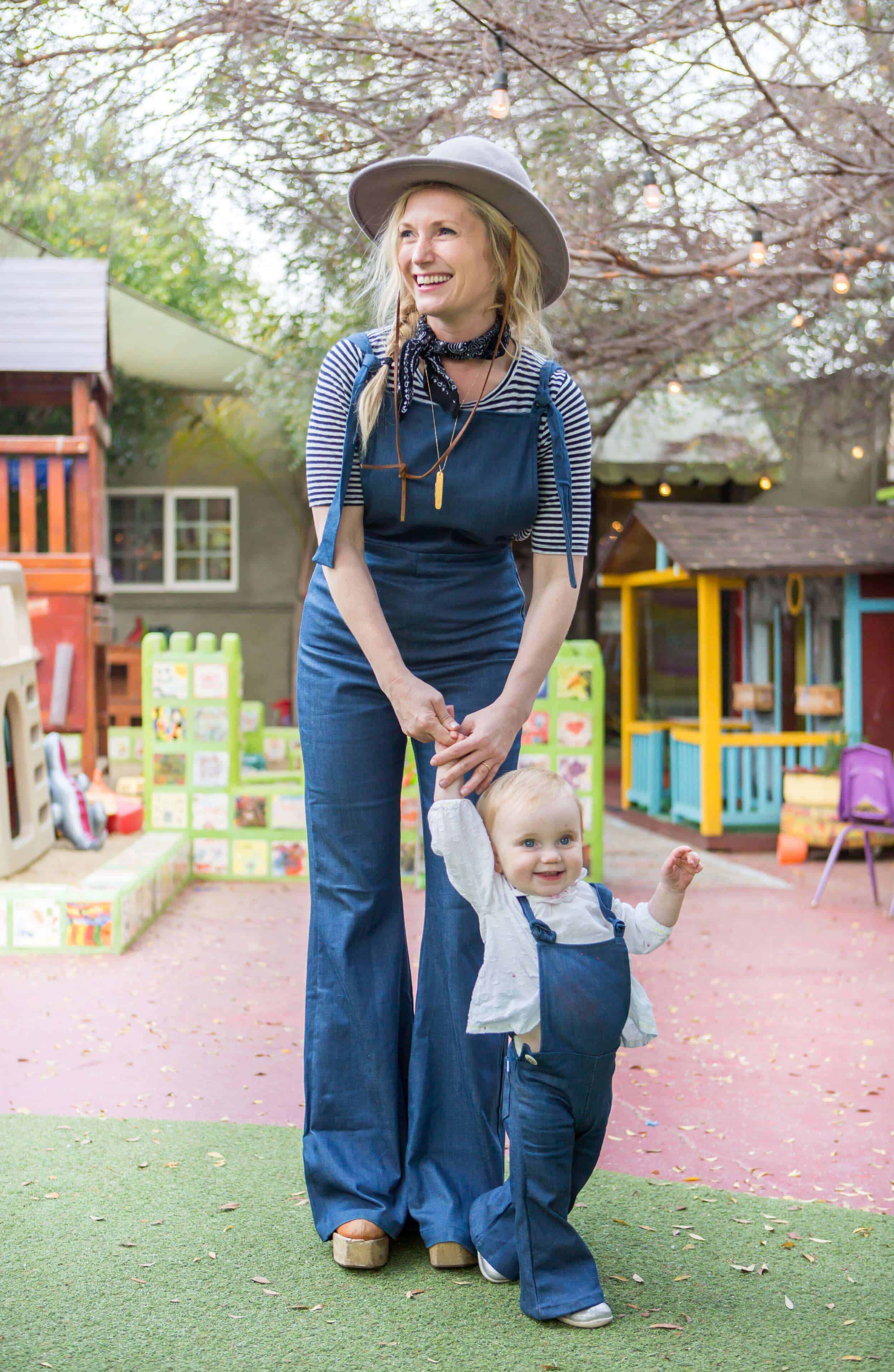 Please note the wide bell on those legs and also the fact that the button won’t snap because lady has a pretty adorably perfect belly (and yes, she fell pretty hard the night before on the corner of a drawer so that mark on her head was a cut that was healing).

Back to the boy of the moment: 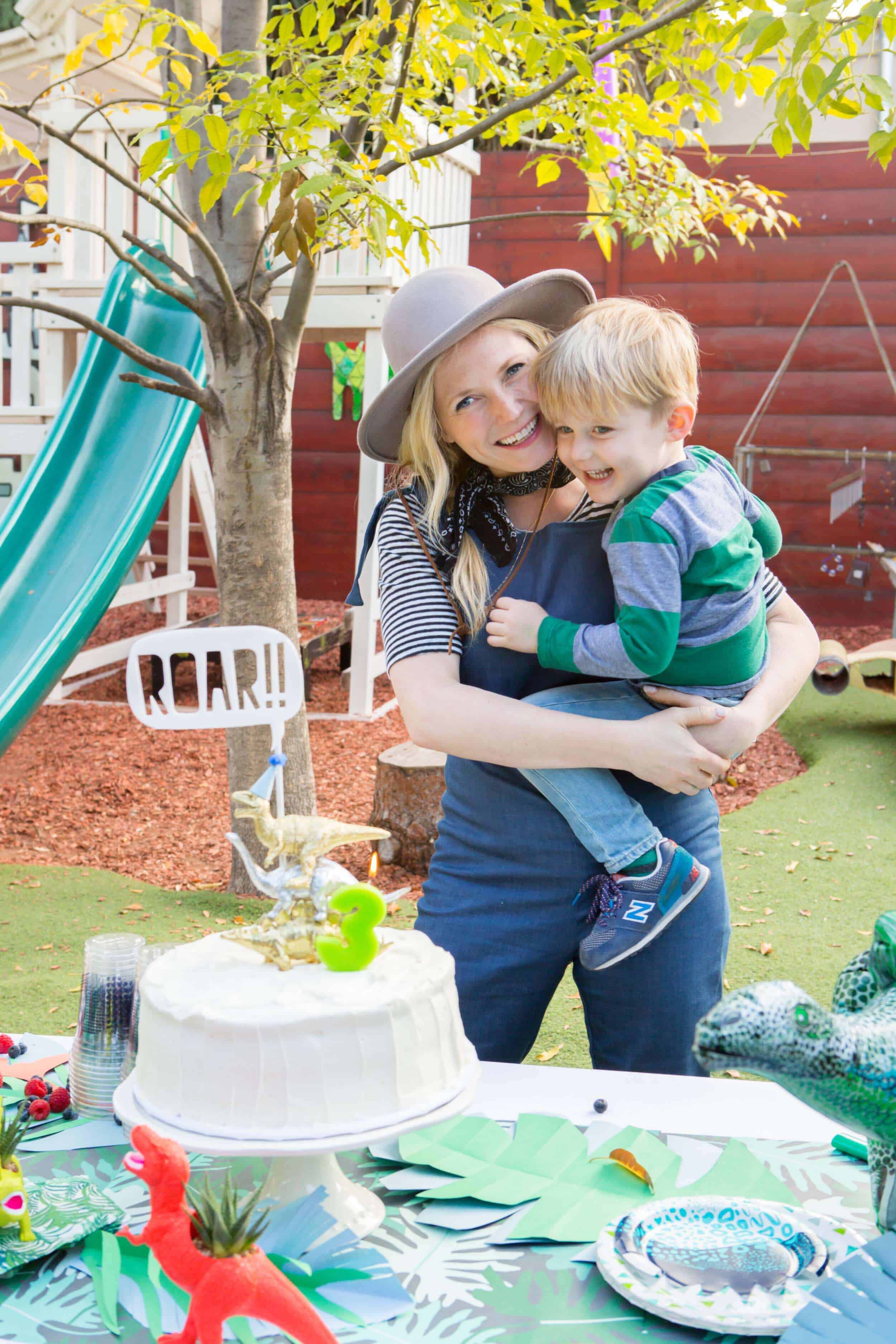 Man was he happy. He knew that it was his day. As I’ve written about before, I’m not a big birthday person. My birthday is September 1st which always fell on labor day before school, plus my parents had 6 kids so there wasn’t exactly blow-outs 6 times a year. But I do believe that kids should feel special on their birthday. I guess I’m more on the camp to under-celebrate (also living in LA I’m paranoid of spoiling our kids at all moments). 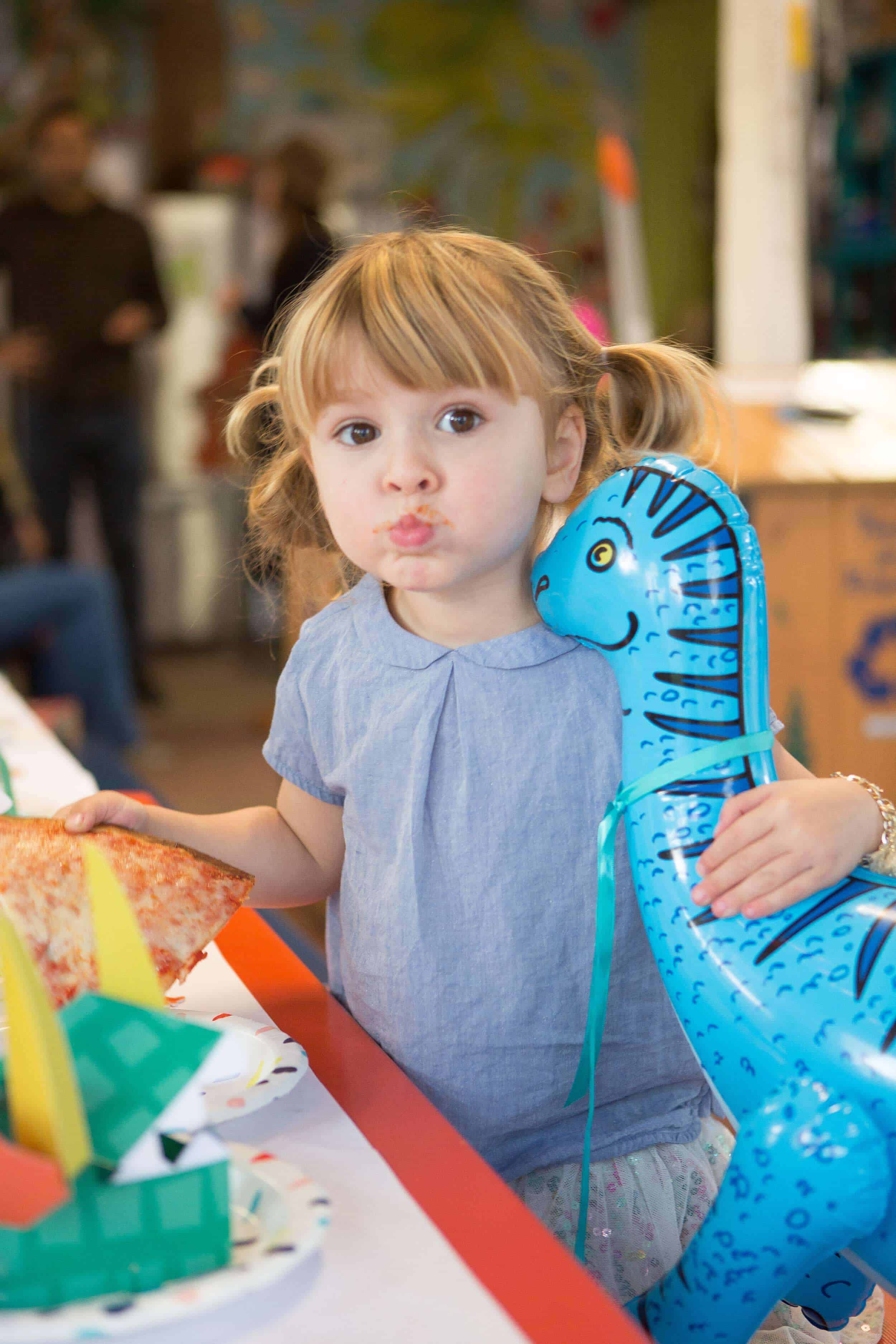 My best-friend, Brian’s great-friend, and their daughter (Charlie’s lifelong crush) Sabine, left for a year-long job in Australia 2 days after this party so writing this post and seeing pics of that little lady made me kinda weepy. Beans, I miss you!!!

It was a very lovely day. 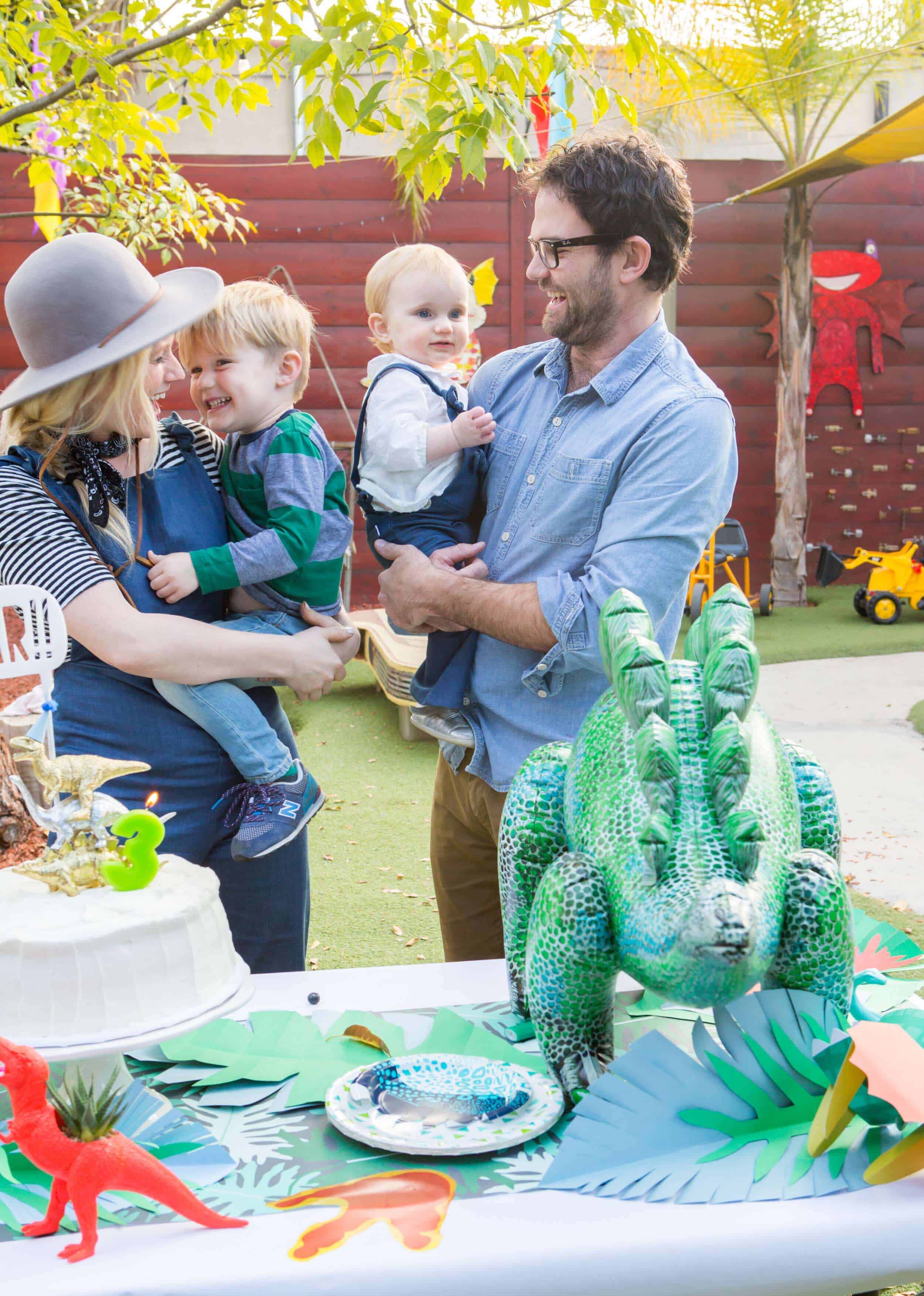 Charlie loved it. I didn’t stress. My only real mistake I made was not bringing enough of those $5 balloon inflaters for all the inflatable dinosaurs (my cheeks/lungs KILLED). But otherwise it was so easy, fun, cheap and it felt special to him (and us).

Because lets face it, he’s THREE YEARS OLD. I could have spray painted a used dog toy green, shoved a bow around it and he would have been PSYCHED.

*Photos by Sara Tramp for EHD

A) I have the same bday philosophy…A few things that make BIG IMPACT go a long way! When I first saw the “roar” in the photo from a few weeks ago, I totally saw it as a digital sticker from a filer (dunno what those are actually called…im not saavy…But a thing added on later like dog ears and fairy headbands.)

B) my mom wanted to make us matching jumpers from teenage mutant ninja turtle fabric, and vests for my dad and bros. When I was, like, 10!! Your outfits are way cuter.

C) I have come to realize that we have – from what I can see in pics – similar hair color, length and texture – do you have any fave products to keep your waves looking fresh? :).

Happy Birthday Charlie’s, have fun and a blast day.

Fun party! Something almost any of us could do too.

I noticed colorful cabins in the back, what are those?

Happy Birthday Charlie!!! That first photo is hilarious, and you all look so happy.

The pictures of y’all in the dinosaur costumes are everything! Parents Of The Year! Looks like it was a great (and beautiful) party. Your mommy-and-me matching outfits are so, so darling. My one year old and I wore matching outfits recently, and I felt like all of my dreams had come true.

Also, good tip on the inflatable toys. My baby is obsessed with balloons. Hadn’t thought about inflatables. Still learning at this whole mom thing. Happy belated birthday to Charlie. <3

Ok, but the dino costumes where it looks like you’re riding them? AMAZING.

You look killer in those overalls hot momma!

This is a great post – all the best things are included. Everything is so FUN, it’s easy, it’s joyful, and it’s real. Thanks for sharing! I’m sure you all made great memories!!

Love those overalls, I might need some of those in my life. How does the sizing run?

Haha – before you mentioned it, there was a shot of Birdie and I was like, hold the phone, ARE THOSE BELL BOTTOM OVERALLS ON A TODDLER. And then you explained it all. So damn cute! I match with my boys (2.5 and 8 mo) all the time because I tell my husband he hasn’t given me a daughter to dress up so the boys will have to pay for it until that happens (all jokes, of course). I saw on another blog someone refer to moms dressing like their sons as their ‘Buster and Lucille’ moment and I am totally owning it. Dress like Elliot as long as she will let you!

Girl, my birthday is Sept. 4 so I neeever had successful birthday parties as a kid. Everyone was out of town! Or my parents made me go camping! But my mom usually did two things for me that I still love: 1) a special birthday dinner where I get to select the menu items, with full veto power, and 2) on those years we did go camping, she made this peach crisp in the Dutch oven.

Those playhouses look so fun. I’m local and always looking for a contained area to let my three monsters loose. Was that a rented play space?

I think the overals are great. I’d keepem and wearem

OMG you and birdie in your matching bellbottom dungarees are so flipping cute! Your sweet family melts my heart. xx

Eek, Emily, that’s the party we want for our son’s 4th birthday in April. And at the risk of sounding creepy, we’re hosting our party at the same spot because we’re moving to the neighborhood in March!

Are you by chance thinking of selling your inflatables/decorations? Willing buyer here so please do let me know!

DYING over these photos! What a great party theme as every little boy I’ve ever known loves dinosaurs. I’m sure girls do too, but but I never had girls so I can’t comment. I have a feeling Birdie will follow in brother’s footsteps.

Emily! We threw Parker a dinosaur birthday party, aptly named… JURASSIC PARKER (He’s Dec 6th… YES… a very busy time of year!)… and my husband wore that EXACT costume and it was EVERYTHING!

And those matching overalls?! I NEED them. I’ve just decided. OMG.

those overalls… you gals are too cute!

Where did you get your t shirt? Love it. I have a scoop back one just like that. I love the sleeve length on it. Very flattering, so I am always in the market for more!

What a great lil party! Your kids are gorgeous but you knew that already XD thanks for sharing a nice easy idea

Where are those amazing dinosaur costumes from? My daughter LOVES dinosaurs and I think this low key dinosaur themed back yard party would make her so so so happy!!!

Omg. Those costumes! Beyond cute!

What an awesome party! Looks like he had an amazing time. Where in the world did you get the inflatable dinosaur costumes? I would love these for my, er, my son’s birthday party!

Could you post a link for those inflatable dinosaurs? I couldn’t find any for less than $15 on Amazon.

What an adorable party and such clever ideas. You did make it look easy and impressive. The dinosaurs are truly an amazing deal. LOVE IT>

From preschool to kindergarten or maybe first grade, I absolutely loved matching my mom. After that, not so much. Enjoy it while you can!

I wish you Happy Birthday Charlie!!! That first photo is hilarious, and you all look so happy.

FABULOUS. I am the laziest Mom on the planet when it comes to my babies’ birthdays – this is good not-insane-person motivation. Also, those overalls look AMAZING on you!

Nice post thanks for this. And Charlie Happy Birthday Buddy!