Good day and welcome in!!! It’s the most wonderful time of the year y’all and we can’t wait for Santa to come to town. Hopefully you’re looking forward to a ‘stress-free’ holiday (well as stress-free as it can be). Today we have some gift ideas to help you, articles to transport you, and a home tour to inspire you. With that, let’s jump on in.

Finding this week’s home tour was insanely easy thanks to Domino…have you ever seen anything more beautiful than a sink wrapped in TILE? Me neither, honestly. Founders of Kalon Studios built an office that you won’t believe isn’t a full-time home. While everyone was (and still is) transitioning from office to WFH, they did the opposite and built an insanely beautiful, cozy office space for their entire team. The space is a Japandi-esque style with loads of natural light and we’re obsessed. Check this one out because it’s sure pretty.

From Emily: My kids got this $1 crystal ($14 for a big pack) from one of their classmates and they are obsessed with it. They love it SO much that we are now giving them to all their friends for Christmas, too. If you need a bulk gift last minute, this is the one!

From Mallory: Need a quick gift idea? This is a MOVE. I don’t know about you guys, but my hair is getting messed in the back from me sleeping on a non-silky pillowcase and it’s time for a change. I love this brand Slip and actually got their sleep mask as a gift once and I am obsessed (btw also a great gift idea!!). Their stuff is soooo soft & the packaging is super cute, plus if you order now it should arrive before Christmas OR you could do an order pickup at a Nordstrom near you if you need it asap…

Also from Mallory: Do ya like shopping for vintage?? Then ya need to check out the hottest shop on the market, Guest House SF! I love looking at the pieces they curate (and they deliver to SF and LA btw) + if you are in need of making your home smell awesome then check out their new candle…I just got one and I cannot believe how delicious my home smells after burning it for less than 2 minutes. Also, be sure to follow them on the gram 🙂

Also ALSO from Mallory: Emily made me obsessed with getting personalized ornaments from Etsy every year (it’s for the mems, guys), so last year I ordered these cute walk of fame Hollywood star ornaments (because we live in Hollywood) which turned out SO CUTE. This year I wanted to get something new to remember our year. For Chase, I customized a Pete Sampras ornament that sort of looks like this (I just messaged the seller and he made it for me) because he played Pete Sampras in the movie King Richard that just came out (watch it in theaters now and on HBO Max!) Also, if you’re into MMA or boxing at all, I think this Conor Mcgregor ornament is hilarious. And then for me, I got this cute door ornament and personalized it with our apartment number because we are SO close to being done with the MOTO!

From Ryann: If you in any way shape or form like poetry or spoken word I highly recommend you listen to Catalog of Unabashed Gratitude by Ross Gay featuring Bon Iver. Listening to it is like meditating with a wise, honest, spiritual mentor. I have generalized anxiety disorder and one morning when I was having particularly bad anxiety I put this on and definitely helped me ground myself.

From Caitlin: There were TWO slam dunk articles in the New Yorker this week that left me screaming (one metaphorically, one literally). First: this story about a guy fighting to excavate his local landfill after tossing a hard drive containing the 64-character code needed to access his HALF-BILLION Bitcoin fortune. Second: this profile of Jeremy Strong basically broke the internet this week and it is one of the most unintentionally hilarious thing I have ever read. Highlights: several of his Succession co-stars talking smack on the record; a story of how he bankrupted Yale’s drama club; a deep look into the mind of someone who probably couldn’t function in any role other than “character actor.” Weirdly, I somehow love him even more now that I know that he seems to be a bit of a terror. (It’s worth reading even if you don’t watch the show, I promise.)

Also From Caitlin: OK, OK…one more article. Food writing or restaurant reviews aren’t normally on my to-read list, but this whole piece had me laughing (guffawing, even) from start to finish. My favorite part: “There is something to be said about a truly disastrous meal, a meal forever indelible in your memory because it’s so uniquely bad, it can only be deemed an achievement…the sort of meals that make you feel as though the fabric of reality is unraveling. The ones that cause you to reassess the fundamentals of capitalism, and whether or not you’re living in a simulation in which someone failed to properly program this particular restaurant.”

From Jess: I just got back from my first actual vacation since the before times. I went to see my best friends in New York and while it was the freaking best, my bag was a bit all over their rooms while I stay with them. I wanted to buy these super cute packing cubes but at the time thought they were probably unnecessary. Well, I regretted it because I would have been able to stay way more organized. Don’t be me and get some cubes if you need them.

Kj, thanks so much for posting about books, etc. on the link-ups. I read the Vox essay on invasive species and it gave me a lot to consider, including some great-sounding book recommendations.

I don’t think listening to books is inferior to reading them, but it certainly doesn’t seem “equivalent”. I’ve tried half a dozen audiobooks, and quickly lost my concentration on the narrative every single time.

Irene, I usually listen to podcasts while walking, running errands or doing work at home, but I switched to audiobooks recently to hit my 100 books goal this year. I have found it has to be the right book and/or narrator to make it enjoyable.

It sounds like it isn’t equivalent for you, but in general listening is just as informative as reading. You can slow down the playback speed if you need to.

I don’t consider one inferior to the other, but I can only listen to fairly light, plot-driven novels or I have trouble paying attention. I need to read books that are dense or theoretical, and I also prefer to read anything really beautifully written, as it’s easier to savor the prose at my own pace.

The spoken word is the oldest form of knowledge sharing in existence, ever since humans were passing down their oral histories around a fire. Listening is also the only way that many people can consume books at all – loss of sight, dyslexia, physical disabilities that prevent them from holding a book, turning its pages, or sitting comfortably for long periods of time.
If you’re talking about children who are learning to read and develop their language decoding processes that is another thing, but even children can have disabilities or other needs. It also helps for people learning another language to hear words spoken aloud – that’s why so many foreigners perfect their English watching TV shows and movies!

Emily – is this your old blue sofa? If so, you can find it here in Illinois via Insta. 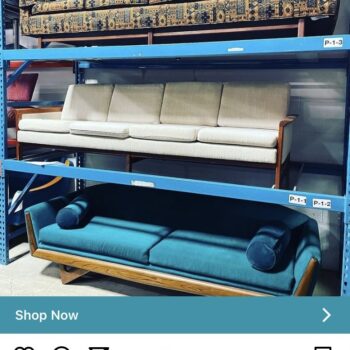 Here’s an old living room with it: https://stylebyemilyhenderson.com/blog/introducing-my-living-room

I can see the conceptual appeal of the house tour. But, for anyone who lived through the era when every awful meeting they ever had, and every horrid business trip they ever took involved rooms with those curtains, nope. Nope, nope, nope.

Haha. That’s how I feel about can lights. Personally, I love those curtains.

Laughed so hard I cried at the resturant review. Thank you!!!

5
Hannah B
Reply to  Amy

Same! Literally wiping tears away after reading that! Sending to all my friends.

I got to the citrus foam part and spit coffee all over my screen!

I use the largest (2 1/2 gallon I think) zip lock bags when I pack instead of packing cubes. I use the same ones over and over. They are clear, obviously, so I can see what is in them. I haven’t use packing cubes but I like that the zip lock bags pack flat. I fold my clothes and put like with like in each bag. You can also press the air out of them so they pack very compactly.

-2
Our sites use cookies to improve your experience. Learn more