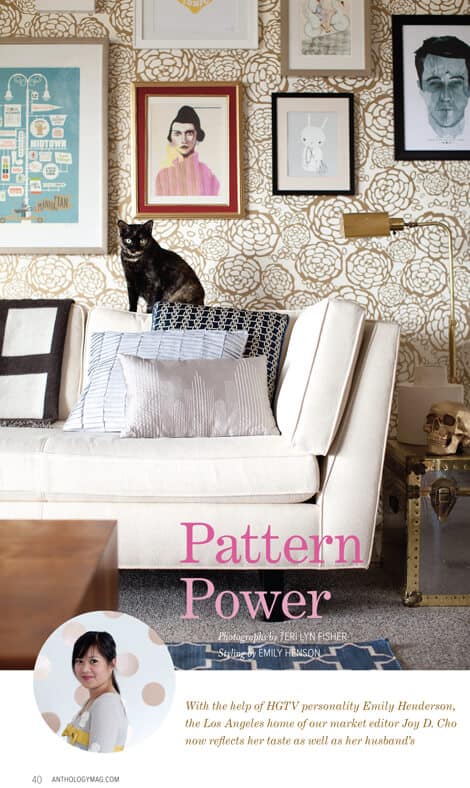 Anthology Magazine, with the lovely Joy.

You all probably already know about this one:  Anthology Magazine. I can’t tell you how much I appreciate a magazine that i can touch and hold and sleep with, and add to my prized collection of magazines and catalogues that i can’t seem to live without.  A magazine that comes to my door (although truthfully i used to buy it at Anthropologie until today when i became a subscriber).   And strangely i like paying for it.  It always baffled me that magazines are pretty much given away (YES, i know why, i worked in the industry for years, but its a bad business model, clearly….).  So the new Anthology Magazine is about to be sent out and looky looky who’s inside:

Yup.  My friend Joy, one of my favorite rooms i’ve done. And her cat.

Just to reiterate and plug some of my favorites:

The wallpaper is designed by Joy and is sold through Hygge and West.  I dream of moving one day and having this in my living room, and the only thing stopping me is that i feel like i should use a wallpaper i’ve never used before but honestly, honestly its really one of my favorites and i love it more and more every time i go over there.  It’s so quiet and glam at the same time.  I did a house this week with metallic gold wallpaper and I think its kinda where its at for me.  I can still do whatever colors i want, it acts as a big neutral, but feminine and glamorous at the same time….SOLD.  to Emily Von Henderson. Now to get a house.  and money to buy the house.

The sofa is from Room and Board

The rug is from Madeline Weinrib, one of my favorites fo shizzle.

And in case you think there is a typo with ‘styled by Emily henson’ know that its no typo, no siree. Emily is actually a friend of mine who is blonde and happens to also be a stylist and designer.  She actually worked on the pilot of Secrets with me and i wanted to hire her on, but man, you can not do this schedule with two kids (trust me, i can barely do it with two cats).  Anyway, Emily Henderson (hello, me here) designed the room for Secrets and Emily Henson styled the shoot for Anthology.  Emily Henson is also british which makes her infinitely cooler than i am, although sadly has moved back to England, perhaps because she is sick of being confused for Emily Henderson.

There are a bunch of other shots of Joy’s house in there, too, her bedroom (which has previously never been seen) with chevron drapery that she designed and is now selling (which i am so mad that i could have bought from her instead of making my own for a recent episode).

All shots by my other friend Terilyn Fisher.  Man i have talented friends.

And Joy is working on a new book which is bound to be a huge seller.  Not sure what i can tell you about it, but if it had existed two years ago when i needed it so badly (which i still kinda do) i would have peed in delight.  Well that seems unnecessary, probably just would have been happy and bought it.  in delight.